One common issue I’ve encountered in my band is having enough guitar amps available at the rehearsal space or gig.

But I play in a band with three guitar players, and it can sometimes be problematic to have a backline that can’t accommodate our needs. One resolution to this problem is to bring my amp to gigs. But in the case of rehearsal spaces, this can be a problem, especially when I don’t bring my car to band rehearsals.

Should you encounter such an issue, you’re likely to make the most out of the situation, whether there are three guitar players or just someone out of luck and encounters a broken guitar amp. Consider the keyboard amp in the rehearsal space or club, but what results will you get when you plug a guitar into a keyboard amp?

Can you plug a guitar into a keyboard amp?

You can plug a guitar into a keyboard amp, but it won’t sound the same when plugging it into a guitar amp. Keyboard amps have this flat-sounding profile that was designed for keyboards. And while many keyboard amps offer equalization, these were intended primarily for keyboards, synthesizers, and other instruments.

The flat voicing of these amps might be beneficial for some guitars, especially if you want the natural characteristics of your guitar to come out. However, you will find yourself wanting more.

Unlike a guitar, you won’t have an EQ section with a keyboard amp for mid frequencies. But that doesn’t mean you can’t use a keyboard amp. With the help of the right tools, you can turn that keyboard amp into a workable part of your guitar rig. 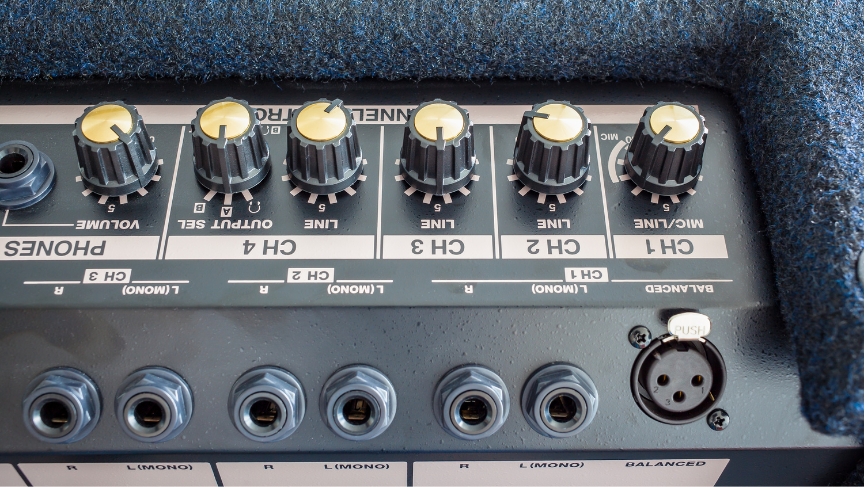 How do I get the best sound from a guitar and keyboard amp?

You first need to get some tone-shaping tools, particularly a guitar preamp or amp modeller. A guitar preamp functions like the preamp section of a guitar and is often patterned from existing guitar models, but these preamps were designed to be more portable than an actual one.

Some guitar amp manufacturers also produce preamps to integrate with your existing guitar rig. And in some cases, those who use digital effects processors will have built-in preamps into them, which are also patterned after popular guitar amps.

The nice thing about preamps is that many overdrive pedals can also function as a preamp. Often, these pedals are called amps in a box precisely because they simulate the overdrive setting of an existing guitar amp.

Can I use any dirt pedal as a preamp?

You can, but for the best results, go for amp in a box pedals. Amp-in-a-box pedals are designed to mimic the overdrive section of an amp. An excellent example of this would be the Fender Boss Bassman overdrive pedal, which emulates the preamp section of a Fender Bassman amp.

You can use other non-preamp overdrive pedals, but you won’t get the best results. Remember that you should keep these pedals on when using a keyboard amp to get consistent results unless you have another overdrive pedal in your rig that you can alternate with. 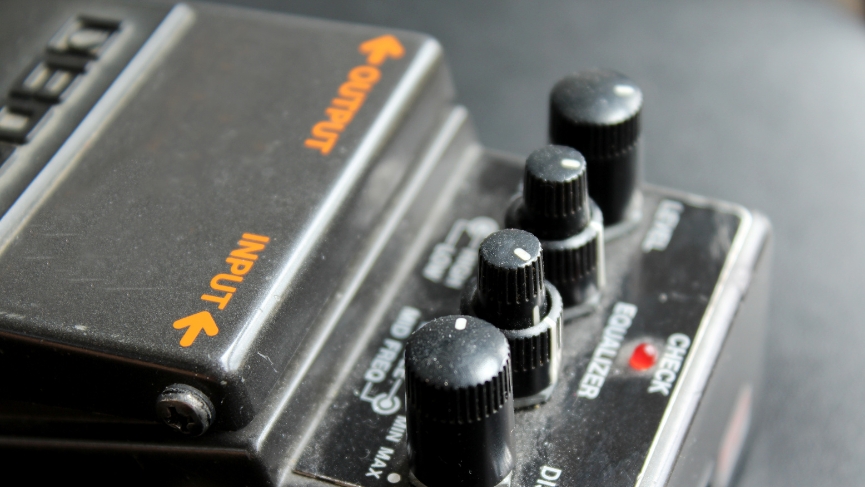 Another way to improve guitar tone through a keyboard is by using a cabinet simulator. A cabinet simulator was designed to mimic the natural voicing of a guitar cabinet speaker. As mentioned, keyboard amps have a relatively flat sound profile, and part of it is because of the speakers loaded into these amps.

Cabinet simulation offers other benefits besides being able to gig without a guitar amp.

One benefit of using cabinet simulation is getting a consistent sound. If you’re like me, who only sometimes has the luxury of bringing a guitar amp during band rehearsals or gigs, and you only have a keyboard amp available, having a cabinet simulator will ensure tone consistency in almost every gig or rehearsal.

A cabinet simulator also allows you to tweak things on the fly. You can interchange cabinet settings without messing too much with the keyboard amp settings. Just set the EQ on the amp to noon or flat, and you should have a decent tone at the very least. You shall make all tweaks on the cabinet simulator and amp modeler.

A cabinet simulator doesn’t even have much to tweak. Often, you will only have to adjust the microphone behavior setting on your cabinet simulator and some post-EQ, just like how a sound engineer will give you more or less treble on your monitors. 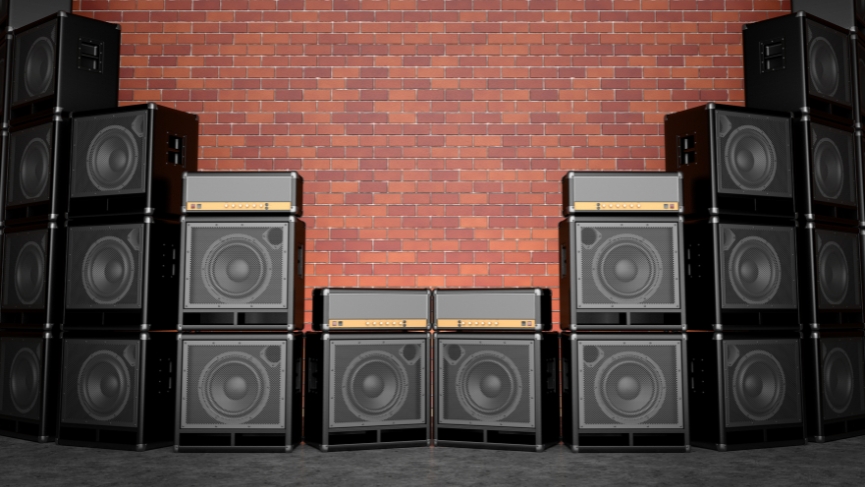 An Impulse Response (IR) is a sound capture of an amp setup. You can say it combines a preamp or amp modeler plus a cabinet simulator. It’s often seen as the most realistic recreation of a guitar tone within the frequency range. A basic IR would often be a cabinet simulator, but sometimes also include amp simulation.

The basic IR is usually a speaker cabinet, but in some cases, an IR captures the whole tone, including room reverbs and preamp equalization settings.

According to Laney amplification, an IR is a good equivalent of taking a photo of your rig setup. It captures every nuance it senses. And while some say that IR and cabinet simulation are different, at the end of the day, they help you sound good even without a guitar amp available.

You need to use an IR loader if you want to use an IR. IR loaders allow you to playback the tone captures, and they may come as software or plugins that you can use for recording, live, or in a stomp box format.

As already mentioned, an IR captures the whole tone of a guitar rig, including your amplifier and room ambiance. It’s like taking your studio’s tone and putting it in a box that you can plug into any system. If you love the tone of a Marshall JCM800 with a 4×12 cab in an opera theater, you can put that in an IR.

Another good thing about IR is room sound recreation. Aside from capturing your tones in your studio, you can also use preset room settings to alter your existing amp tones. If you don’t have a particular tone, use these presets to simulate it. And because a keyboard amp has a relatively flat and dry tone, you don’t get any coloration in your tones.

Another advantage of using IRs is that you can go ampless. If there’s no keyboard or extra guitar amp available, you can still play by going straight to the front of the house. Of course, having an amp will still give you the advantage of having a monitor for your sound; using an IR will prepare you for the worst situations. 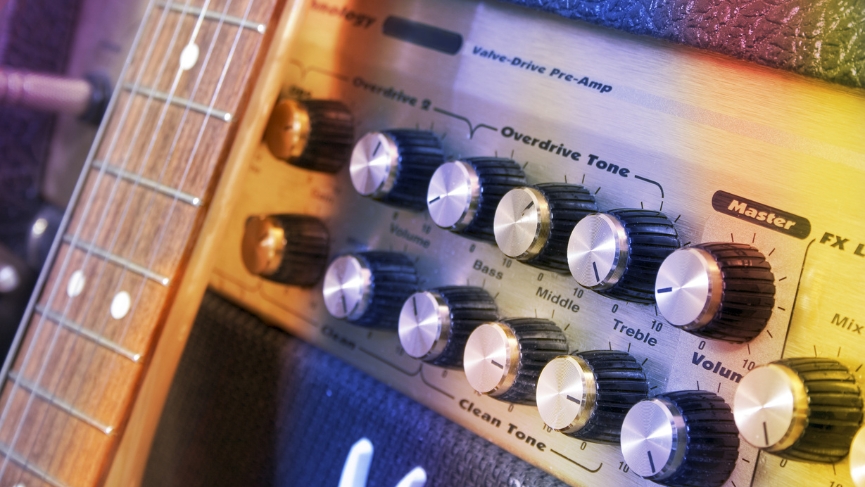 An EQ pedal at the end of your chain also does wonders if you need to plug into a keyboard amp. You can use an equalizer pedal to mimic different cabinets, such as an open or closed back, by tweaking the high and low frequencies. It can also function as a power amp simulator for your existing dirt pedals when running through a keyboard amp.

Using an EQ pedal at the end of your chain will help you sculpt the tone that the keyboard amp will project, given the blank slate you get. It’s also a good combination with a preamp, especially if you use modulations, delays and reverbs after your preamp pedal.

How do you plug a guitar into a keyboard amp?

Plugging a guitar into a keyboard amp is a matter of taking the output signal of your guitar and plugging it into the input jack of the keyboard amp. Many keyboard amps now have a dedicated instrument input jack, which makes it easier for you to plug instruments, such as guitars.

However, some keyboard amps do not have an instrument input jack. Often, they would have a line or XLR input similar to microphones. Should that be the case, this is where amp modelers, cabinet simulators, and IR loaders come in handy.

Many amp modelers, cabinet simulators, and IR loaders in the market have line-level and XLR outputs that you can use to plug into these jacks on keyboard amps. While you can plug a guitar into the line input, it’s guaranteed to sound good compared to converting the signal to line levels.

If you already have any of the three modeling systems and a keyboard amp, here’s how you rig your guitar to the keyboard amp. 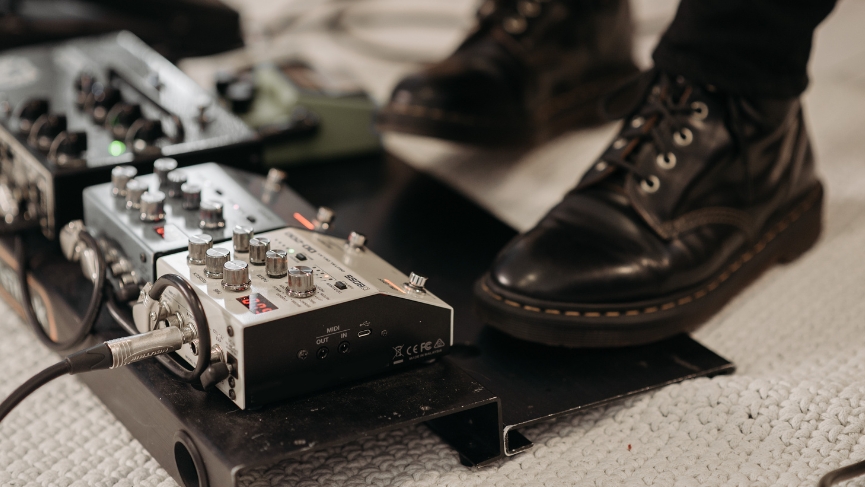 Which should I get to sound good on a keyboard amp?

Among the three options listed, a guitar preamp or amp modeler should be your best option. For one, amp modelers have a dedicated EQ section that can help you sculpt your guitar tone. On top of that, many amp modelers have built-in cab simulation or IR loaders.

You can go for an IR Loader if you don’t want to deal with too much tweaking. Since these are exact captures of your amp and speaker cabinet tone, you don’t have to tweak much here except for the amp’s volume. 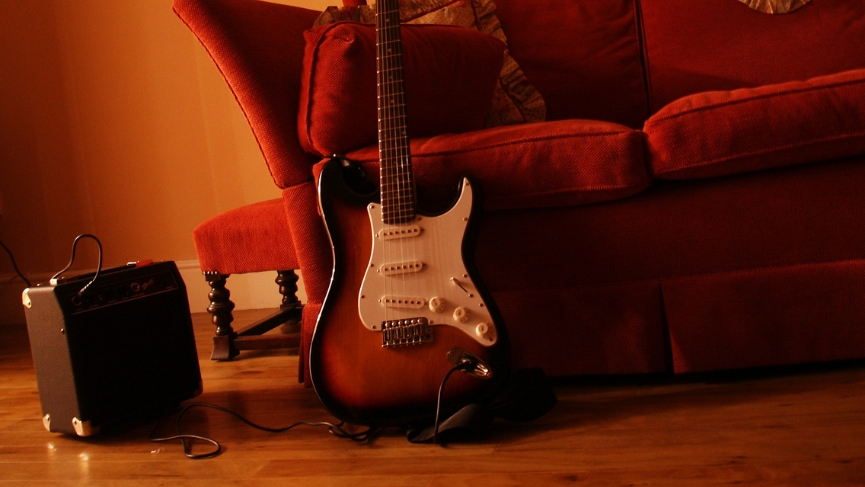 With a dedicated instrument input, you don’t have to worry about impedance mismatch or feeding a weak or strong signal into the amp. However, that doesn’t automatically mean you will get ideal tones.

If you’re plugging an acoustic guitar, it might work, as you get the natural tones of the guitar. An electric guitar is different, for that matter. On top of that, many acoustic guitars have built-in preamps that can help get the best sound from your acoustic guitar.

Personally, I’d go for the preamp and cabinet simulator option, so I could have more options to tweak my sound based on the room acoustics. An IR loader is also possible, but I would probably combine it with a preamp and use the IR to emulate a cabinet speaker and its miking.

John Narciso is a guitar player and music technology hobbyist. He loves exploring guitar effects processors in pedal and plugin format and free music applications. His music preferences tend to be diverse, listening to genres spanning from metal to alternative rock and a little hip-hop.