What’s the purpose and difference between LUFS, RMS, and True Peak? Why is it essential for me, and what I need to know about it? Let’s talk further to answer these questions and provide you detailed information about all these three music terms.

Why is it important to understand LUFS, RMS, and PEAK values, and standards?

When you are mixing, you want to find the space in a mix for all the instruments and vocals. So no sound or frequency band will interfere with other sounds that are present. Also, try to focus on the volume (power/loudness) of the individual tracks when making up the arrangement.

We concern ourselves mainly with the dB level of each track when mixing music. The best practice is that individual tracks in the mix sit at about minus 15 dB RMS (More about DB’s vs. LUF’s and RMS measurement later). We do this because as we add tracks to the arrangement, the overall output level will probably increase, and we want at least 8 to 10 dB headroom when we start Mastering.

Understanding LUFS, RMS, and PEAK values is very important. It’s not important what type of music you are producing, because it will measure the production for broadcast-ready compliance. What this means is that broadcasters want their content to be broadcast at a constant volume.

We rely very heavily on our ears to give us a sense of the right volume. But the thing is that best tracks are carefully mastered by using our eyes and tools, along with our ears. It will tell us if our arrangement is broadcast compliant.

What Is a True Peak Level?

We associated volume/loudness with power. This is because initially, we used “peak power measurement” to measure the power in an AC electrical circuit. AC Power and an Audio Wave Form have the same characteristics. They are both sine waves in nature.

The greater is the distance between the two peaks means more power, and that results in more volume.
Audio sources like speakers or headphones have a design limit on the amount of power they can handle without distorting the signal. They also have physical and design limitations as to how quickly they can respond to a signal swing from one peak to the other (although we probably won’t detect it). That’s why we need to see and hear how much power, volume, loudness is in the signal. The signal or music we are producing must be able to be reproduced without distortion by the receivers (speakers and earphones, etc.)

When measuring power, volume, loudness, we use two types of measurement:

1) Peak to Peak measures the variance in volts or amps or decibels between the two peaks of a signal in a moment in time. The bigger the variance, the more power or volume.

2) RMS ( Root Mean Squared) is a mathematical calculation done to measure the average volts or amps or decibels of a signal over a period of time. 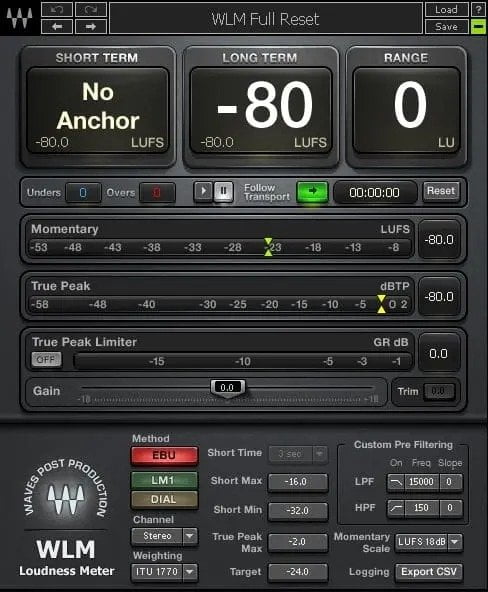 Without going into the history and mathematics of decibels, all our DAWs and Loudness Meters are calibrated to zero / 0 DB’s. This is called the Full Scale (dBFS). That is why we work with levels that are measured with negative to zero. With positive dB ratings, we go into the red our, and the signal will start to clip and distort.

When either the Peaks or the RMS in a signal are too high, the signal will distort because the receiving devices are not designed to handle that amount of volume. So we calibrate to zero across all audio devices, from audio production to audio reception.

A music arrangement will have an overall or average loudness. This is measured in RMS. If we mix and master the arrangement and there is a drum hit giving us a peak that we keep below 0dB, the rest of the arrangement might be too soft. The reason for that is because the momentary high volume is a peak in the arrangement. That is why we use compressors and normalization to master to an average (RMS) perceived loudness.

We have an arrangement of:
RMS minus 18dB
Peak minus 8dB
We can normalize to minus 3dB ( because that’s what the TV station will ask for) and keep the dynamic range ( Dynamic range is the difference between minus 18dB and zero.

Now we have:
RMS minus 13db
Peak minus 3dB

Or we can add compression and lift minus 13dB RMS to minus 8Db RMS and compress the peak down to minus 3Db. We will still be peaking at minus 3DB = Less dynamic range but more perceived loudness. Check our post how to maximize the loudness without clipping or distorting

Then some producers mixing for clubs pump everything to 0 DB RMS / Average = no dynamic range, just loud. That’s all it is, just sounds loud, without any musical expression. It’s just boom boom boom, which is ok for some environments and genres. But we must always remember that it is a dynamic range (variance in loudness) that will allow music to change expression as the arrangement develops. So movie soundtracks will often have a big dynamic range as they move from peaceful to tense.

The organizations ( TV stations, Radio Stations, and Internet Broadcasters) want their content to adhere to a broadcasting standard. They don’t want to have to re-master our productions. That’s why we have LUFS. 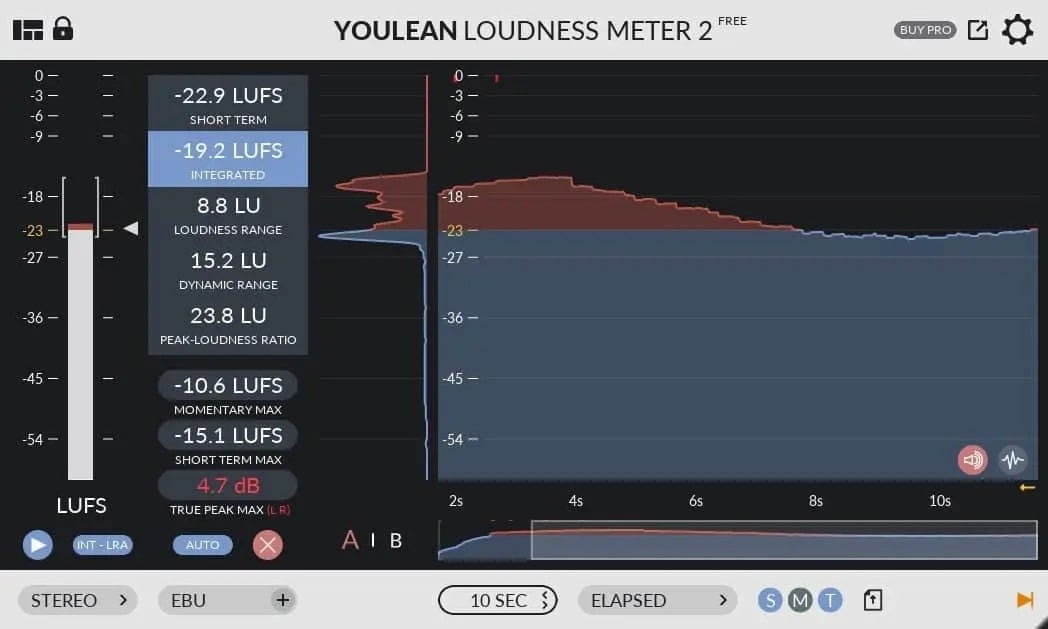 What Is The LUFS Standard?

The “LUFS” stands for Loudness Unit Full Scale. Where Full Scale = 0dB. Developed by the International Telecommunications Union and adopted by most broadcasters and many governments are including this standard in broadcasting legislation.

Is LUFS The Same As RMS?

1 LU is roughly the equivalent of 1 dB. In the same way, our the readouts on our faders and VU meters will give us either Peak or RMS in dB.

LU meters will provide us with:
LU – I. Where I is Integrated measured over the whole track.
LU – S. Where S is short sampled high’s. ( 3 seconds). Music production should always sound pleasant, dynamic, and equal in terms of the perceived loudness. Our DAW Level Meters measuring RMS and Peak to Peak aren’t giving us a true loudness reading. These meters display in dBFS and only tell you whether your audio signal is clipping or not going red.

Our ears and brain judge loudness on average levels, not peak levels, so it’s better to check the metering to make sure everything is fine. To measuring audio loudness, we now have loudness units relative to full scale. LUFS enables the normalization of audio levels and matches how we are receiving the sound.

LUFS meters will show the integrated loudness of audio, similar to RMS, but more truthful in terms of our hearing. RMS measures the average power/loudness of the audio, but LUFS – I (integrated) is more accurate. Have a look at the meters Below being used on a mixed track arrangement. LUFS on the left. RMS and Peak on the right. All readings are in dB. These meters are in Logic Pro X. 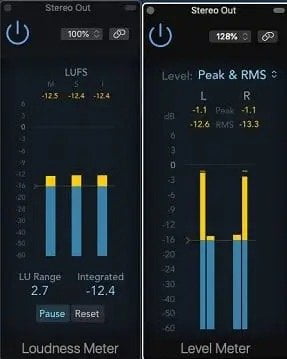 The one on the right is a ‘Level Meter’ measuring Peak and RMS in dB.
The one on the left is called a ‘Loudness Meter,’ measuring LUFS in dB. There is almost no difference in the RMS and LUFS measurements.
Now, if we have left enough headroom, we can start mastering the mix.

How Many LUFS Do You Need For Mastering?

We must remember that LUFS is a measurement of ‘Perceived Loudness’ measured in dBs. Our LUFS dB measurement will depend on the level of our source and to what degree we compress and normalize. So if we are mastering for in-flight entertainment of a plane with high noise levels, the request might be for music at minus 3 LUFS-I.

If we are asked for a baby’s lullaby that will be streamed over the internet into a nursery, the request might be for minus 18 LUFS-I.

So we don’t have loudness tools that allow us to adjust the LUFS. We still Normalize and Compress, then Measure LUFS. Here is an excellent metering and mixing tool that let you do lots of things including controlling the LUFS  – LEVELS 2 from Masteringthemix 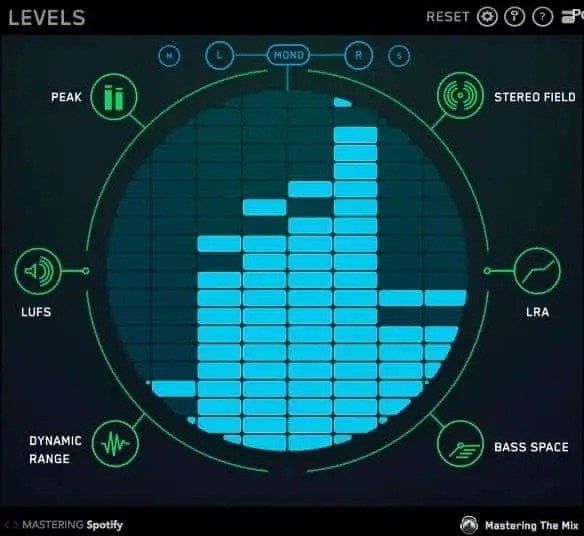 Does Normalizing Audio Affect The Quality?

Normalization increases the volume of the entire track to a target dB but keeps the dynamic range between RMS and Peak. So if we bring our RMS up to zero, our peak could clip and distort. If we normalize over zero RMS, it will result in noise and distortion.

How Can I Increase My LUFS?

The increasing volume will increase your LUFS reading.

How many dB is LUFS?

What are Intersample peaks?

LUFS – S samples peaks at intervals in the signal/music.
There may be higher peaks between the samples that are missed when sampling segments of the audio.

How  Loud Is Spotify Master?

Spotify specifies submissions for streaming at minus 14LUFS- I and not to peak at more than minus 1RMS because of the high dynamic range for expression. The track will not sound better just because it is louder.

It also facilitates that Spotify has a standard ‘input level’ into their streaming platform and so that can ( if they wish to do so) increase the level at which the broadcast uniformly without having some tracks distort.