To get the most out of EQ in your mixes, you must understand the different types of EQ, which include:

Active EQ is Modern EQs that utilize active power. Passive EQ is Traditional EQs that utilize an amplifier on the output stage to compensate for the level. With Dynamic EQ, you can adjust the filter’s frequency, gain, and bandwidth so that it reacts dynamically to your music.

Come dive in with us and take a look at the various types of EQs and why you might choose to use one of these EQ types over the other.

What Is Active EQ?

The best way to think of an active EQ is a variation on an amplifier. Active EQs, unlike passive EQs, can boost AND cut. Producers and mix engineers often use active EQs to add or get rid of resonances that passive EQs would not be able to get rid of.

While hardware active EQs came with a power supply, most active EQs are digital now. Of course, digital EQs do not require power supplies, though they still utilize the same characteristics as traditional active EQs in that they can boost, cut, and add color.

Also, if you are looking for free EQ plugin, Check this post.

What Is Passive EQ?

Unlike active EQs, passive EQs are not able to amplify or boost frequency ranges. Hardware passive EQs come with amplifiers on the output stage. You can think of this output amplifier as makeup gain, as it compensates for volume loss during the filtering process.

Passive EQs are available in digital form nowadays. Check this article to see the best of them.

What Is Dynamic EQ?

Dynamic EQ combines the precision of an active EQ with compression. With dynamic EQs, you can adjust the filter’s frequency, gain, and bandwidth so that it reacts dynamically to your music. Dynamic EQs work on the same principle as compressors, reacting to the input signal relative to the threshold.

The first dynamic EQs began to hit the market during the digital age in the late 1990s, though they have just risen in popularity over the past few years.

In a deeper sense, they mimic the workflow of a multi-band compressor, as they have the ability to affect specific frequency ranges by utilizing dynamic crossovers. However, instead of traditional dynamic crossovers, we get EQ filter shapes, giving you total dynamic control over particular frequencies in a mix.

Here is a list of our recommended Dynamic EQ plugins:

Active EQ is far more versatile compared to passive EQ and is used more often. Passive EQ allows you to create changes in tone without utilizing any powered components. Dynamic EQ allows you to apply changes in gain directly to the gain parameters found in a multi-band parametric equalizer.

Passive EQs don’t use any of these things in the digital realm, though manufacturers still make them emulate the sound of hardware passive EQs. Engineers often describe the sound of old passive EQs as “musical” or “warm.”

Unlike active EQs, passive EQ does a lot less harm to audio. They don’t smear transient responses or bring on tons of distortion as active EQs do. Essentially, if you want to do some tone-shaping without tonal coloration, passive EQs are a fantastic choice.

Many old passive EQs, such as those found on classic gear at Abbey Road Studios, did not have continuous Q controls. Designers needed to choose the most useful curves for the majority of musical situations.

Engineers love passive EQs for their limitations, as they don’t have an infinite number of “distracting” choices that could potentially slow down the mixing process. You are forced to work with what you are given when using a passive EQ, drawing on the influence of what past engineers deemed as musical many decades ago.

A Dynamic EQ is an entirely different beast altogether. Dynamic EQs typically take their designs from parametric EQs.  Dynamic EQs give you total control over the Q value and frequency, similar to an active EQ, though they work in response to frequencies in a track.

What is the difference between Passive and Active EQ's

When To Use Active EQ In Mixing & Mastering?

The best way to use Active EQ when mixing or mastering is to boost certain frequencies. In other words, use active or additive EQ if you feel that your sound is missing some necessary coloration in a specific frequency range.

In mastering, you should be very careful when using Active EQ, as every frequency you alter affects the entire mix. If you notice that something is missing in a particular instrument, it is better to go back and use Active EQ in your mix before mastering.

When To Use Passive EQ In Mixing & Mastering?

Passive EQs are handy for vocals,  electric guitars, pianos, live strings, or other acoustic instruments and mastering. They often have warm and broad low-end characteristics without any punchiness or cloudiness and silky highs without sibilance or harshness.

Because they don’t have very steep filter curves, we wouldn’t recommend using them for any type of clean-up EQ work.

In the mastering game, passive EQs are beneficial. In most professional mastering studios around the world, you’ll find some version of the Manley Labs Massive Passive EQ.

Mastering engineers love this EQ and other passive EQs for mastering, as they help make broad, sweeping changes to a mix without introducing phase. Plus, they have a much more natural sound, which is excellent for retaining musicality in a mix, even when slight changes are made.

When To Use Dynamic EQ In Mixing & Mastering?

Dynamic EQ is great to use in a mix when static EQ isn’t enough. In many cases, songs consist of varying sections with different moods, colors, or emotions, which can call for different treatments throughout.

Let’s look at a mixing example.

Let’s say that you have a singer who has more of an attack or bite to his or her voice during the chorus compared to the verse. If you want to get rid of that bite, you wouldn’t want to slap a static EQ and remove a few dB of 1-3kHz, as you’d start to dull the verse parts where that bite doesn’t exist.

Instead, you would use dynamic EQ to tame the parts where that bite exists while leaving the verse parts alone.

Here are a few popular techniques for using dynamic EQ during the mixing process:

These same concepts apply when using Dynamic EQ in mastering as well. The chorus of a track will often sound very different compared to the verse. You may find that the verse sounds a bit dull, for example, so you decide to pull up the highs.

When it gets to the chorus, however, those highs turn into unwanted harshness. With dynamic EQ, you can create an “expansion-type” filter to create more presence and air when needed.

You can use this concept in reverse, pulling down any harsh or high frequencies during the verses to save your ears or create a bit of contrast so that the chorus feels larger when it comes in.

Based on this short guide, we hope you now have a better understanding of how to use different kinds of EQ plugins to achieve the sound you desire. Whether you choose to use an active EQ, passive EQ, or dynamic EQ, you can potentially make better decisions.

Of course, the big question that you might be asking now is,

Which EQ plugin should I get?

Today, there are hundreds of EQ plugins on the digital market, many of which claim to be the best around. If we had to choose our desert island EQ, it would b FabFilter Pro-Q 3. This plugin is one of the best EQ plugins on the market today. It acts as an active parametric EQ, though you can use it as a dynamic EQ if you choose. 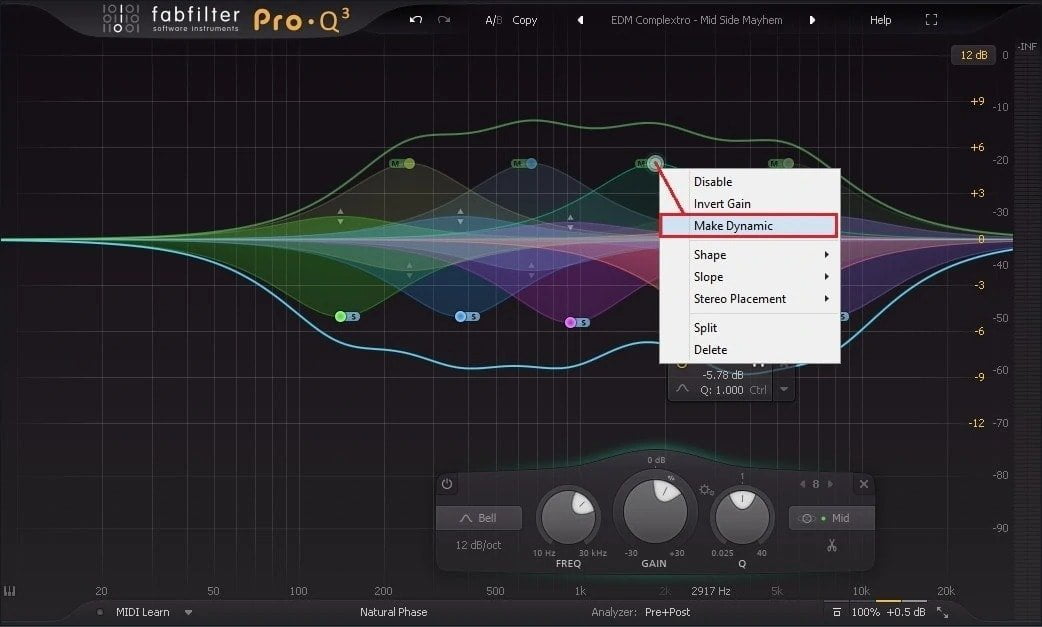 Plus, FabFilter’s Pro-Q 3 has one of the cleanest GUIs around and the most transparent sound quality that we have heard from the vast number of parametric EQs we have tried. It is truly unrivaled.

Make sure to keep this little guide in your back pocket so that you always know when to use active EQ, passive EQ, or dynamic EQ to create cleaner, clearer, and more professional mixes. Until next time.