In this article, we will explore recording and mixing levels using a PC based DAW.

So How loud should a mix be before mastering? –

We are aiming for no more than -8dBFS PEAK and around -20LUFS on the final output channel before mastering. Optional Mixing Rule. Don’t cheat by using the Limiter. Limiter limits dynamic range and our arrangement will lose expression if we limit it. Clipping is essentially a signal that has been limited so fiercely that it distorts. Clipping can happen through signal manipulation or just exceeding the speaker/ earphone output specs.  Target output after the mix at -8dBFS PEAK and around 18dBFS RMS or LUFS.

This will allow us to lift the highs to anywhere between -3dBFS and Zero without clipping and lift the low volumes (by means of slight compression) without loosing too much dynamic range when Mastering. Please check our post on How Can You Learn Mastering Music As A Beginner?

How much headroom should I leave for mixing?

Depending on where our music is going to be played, and the genre, the final arrangement level after Mastering should be -3 to 0 PEAK with a dynamic range of around 10dB to 16dB.

This target gives us a dynamic range of 12dBFS. This also allows enough headroom for us to ‘lift’ the lower volume levels (using compression) to increase the overall loudness, without clipping or distortion when Mastering. Look at the screenshot below. 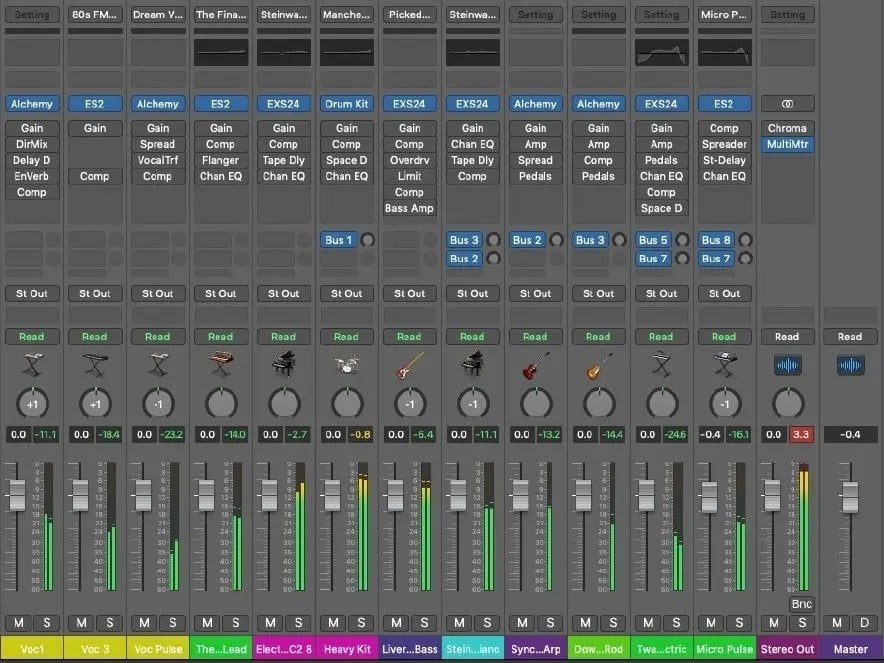 The problem is that we have no headroom. We need headroom to mix and to master. If we start fiddling with the faders and adding effects, we are going to spend a long time to produce a sub-standard production. How do we approach this? We will need to do Gain Staging before starting to mix. Gain staging is the process of setting all of the volume levels on the channels to about -18 to -20RMS dBFS. Some producers recommend mixing to a higher level, but to my mind, it makes things more difficult later. If we get the Gain Staging correct before we begin mixing, we will achieve maximum volume and avoid clipping and distortion when we start mixing. We will also spend less time trying to get the balance right by continually fiddling with faders. Keeping all tracks around or just below -18 RMS (or LUFS) and not exceeding -8dBFS PEAK gives us plenty of headroom when we start Mixing. Read this post on what’s the difference between LUFS, RMS and True Peak. The next screenshot is the same project, with all the levels set to approx. -18 to -20dBFS and now PEAKS at -7dBFS on the Output Channel.

There are varying opinions on how best to do this. But the key is to get the level of the channel to the target level (around -18, some producers target around -12PEAK) PRE-FADER without adjusting the fader. Depending on your DAW, each track has a control panel (In Logic, it is the Inspector panel) where the level of the track and /or region can be adjusted. In the screenshot sample notice that the faders have not been adjusted, they are still at 0dBFS. In this example, the Gain plugin was used. The great thing about a Gain Plugins is that it can be used on both MIDI and Audio Tracks. We could have adjusted the volume on a MIDI track, or normalize to a level on an Audio track. 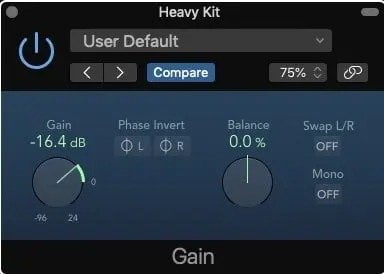 The gain on the Gain plug-in is adjusted up or down before the signal hits the channel fader, so that has the signal hit the fader at around -18to -20dBMS PEAK. The result is our Output Channel is sitting at -7dBFS PEAK and -20dbFS RMS. We haven’t touched a fader or activated an effects plugins, and we are now ready to start mixing. Mixing rule 2. No channel can be in the yellow or RED. Only green wherever you look.

How can I make my mix louder without clipping?

We use the filtering bands on the EQ to filter out unneeded frequencies on each track. This also gives us the ability to boost the signal on that track more. As an example, the sample in this article on channel 7 has a Hard Techno Hit at a high rep rate in the higher frequencies. Use the Shelf Low Pass Filter to cut out all low frequencies or harmonics that may be present and use one of the Power Metric Bands to slightly boost the higher frequencies.

The spectrum analyses come with many equalizers and will give us a graphic representation of the instruments frequency band, we then use the filters to cut out the rest. We do this for each track. Two screenshots below show the equalizer with the spectrum analysis, and the highs lifted slightly. 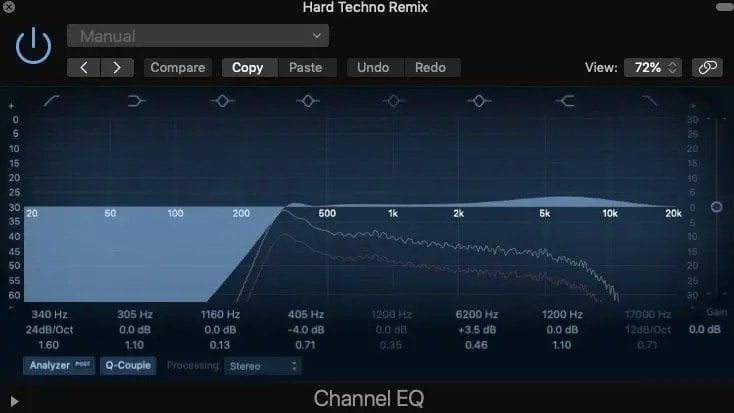 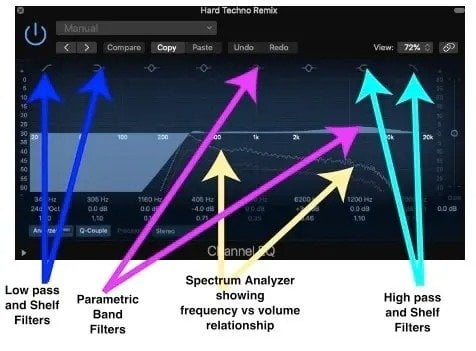 After level setting and frequency separation, it sounds OK, but..

How can I make my mix more dynamic?

To achieve the dynamic sound in your mix, start adding effects to your instruments like Dynamic EQ, Multiband Dynamic Compression, but also transient shapers can make your sound fresh and dynamic especially on drums. Up until now, we have been busy with the technical part of mixing. Now we come to the art, the craft. Also, let’s check this post what will further explain to you how to increase dynamic range.

The mixing workflow is a bit of a conundrum. Primarily we mix to get a great sound, but we start mixing the process with volume level adjustment. When we are done with our mix and got a great sound, we start the Mastering process, where the primary objective is to get the right volume level.