This article will discuss if you should produce using a limiter on the master output.

A limiter is a dynamic processor that compresses audio beyond a set output ceiling. How it works is that you set a ceiling at a certain dB, let’s say at -1 dB. So whenever the audio signal surpasses that ceiling, the limiter will bring it down and ensure it doesn’t exceed that set ceiling of -1 dB.

Limiters are compressors with infinite ratios. Producers and engineers usually use the limiter on the master bus, the mix, or during mastering. It’s known to smash the dynamic range of the audio, bringing the softest parts closer to their loudest parts.

Now that it is clear what a limiter does let’s understand if you should produce with a limiter on. We will give you a reasonable answer, provide all explanations, and give you tips and tricks around the workflow. So let’s dive right into it.

Should I Produce With a Limiter On Master Bus?

Using a limiter on master channel is highly recommended to protect hearing because once many tracks play together, the output can exceed 0 dB, causing danger to your monitors or ears. However, if you have things under control and gain-staged the tracks between -9 and – 18 dB, using a limiter is not necessary. 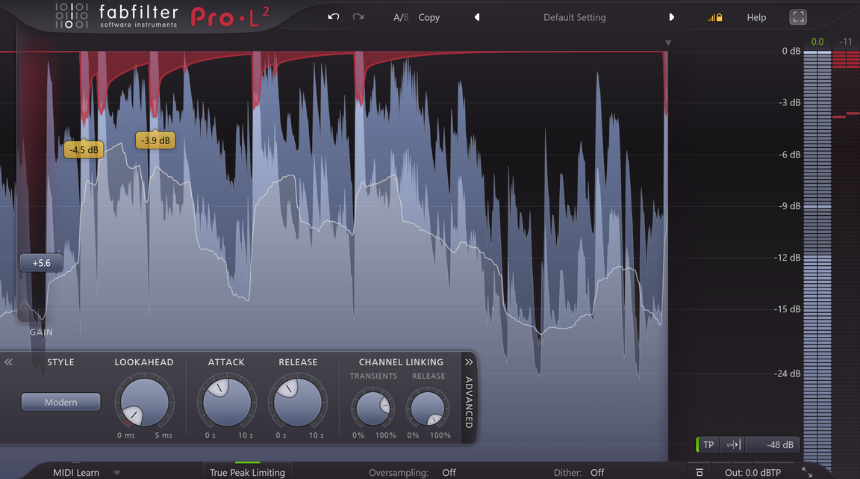 Still, as a safety measure, keeping a limiter at a ceiling of 0 or -1 dB is fine. However, using a limiter can also give you a false or colored image of your sound, and one needs to be careful while using it. As we have read above, a limiter smashes the dynamic range of the audio.

So when you open playback and listen to the instruments/tracks playing together, things may sound louder, wider, and brighter than they are. So after you remove the limiter to listen to the tracks, the balancing may get weird. For example, if you balance your sounds with a limiter on the master without gain staging, the balance will sound different without the limiter.

Let’s say you balance the bass to the kick drum based on how it sounds with the limiter. But after you remove the limiter, you discover that the bass could be more energetic and sound better. So to avoid that, gain stage the track/stems between -9 and -16 dB.

A complete guide to GAIN STAGING (your questions answered)

Secondly, be careful to monitor the volume levels of the individual tracks before you export them independently. A limiter limits only the main output. But let’s say your kick track exceeds 0 dB but gets limited only at the master out. So when you export the kick track, it will sound clipped.

In that case, you can use a limiter to drive up the audio and get an output loud enough not to lose the “vibe” of the track. Louder outputs sound more exciting and may inspire your productions. Just be careful about the sound selection, and avoid being illusioned by the loudness of the limiter.

Should I mix with a limiter?

Using a limiter to avoid the mix exceeding 0 dB is a good practice to protect your ears and equipment. But it’s a better practice to gain stage first and not mix with a limiter on, as you will end up fighting against your limiter while mixing the track.

Relying on a limiter for your mixes may be a practice you want to avoid because it may give you a false image of the mix. Instead, use other effects like EQ, Compressor, multi-band compressor, saturation, distortion, etc., to achieve the sound you’re going for. A limiter is an extreme effect, like a compressor on steroids.

That will likely give you the wrong picture of stereo imaging, loudness, and overall energy and may even ruin your mixes. Mixing is a perception-based process, and it’s easy to fool your ears with more volume. Our ears perceive louder as better, but loudness is something you should achieve methodically.

Using subtle compressors, multi-band compressors, and saturation plugins, you should shoot for higher energy, depending on the sound and genre. The limiter may seem like a shortcut for doing so, and it may even work sometimes, but in the long term, it will harm you.

However, there are no rules in music. For many engineers and producers, the opposite also works. It’s a creative process, so create your workflow, see what works best for you, and follow that process. These are just tips and tricks that work for me.

Should I put a limiter on everything?

A limiter is an extreme compressor, and applying it on everything will eat up the dynamic range and make your mixes and tracks sound lifeless. So using it on 808s and bass instruments may work, as they don’t need that much dynamic range, but not on vocals and melodic instruments.

So I recommend against the practice of applying a limiter on everything. Some elements in the mix need to have ups and downs. While a limiter may seem like an easy solution to energize your sounds, it will hinder the natural expression of the instruments/vocals and leave no headroom for any additional arrangement.

Should I put a limiter on my beats?

Do not export your beats with a limiter on the master out because that may eat up the headroom required for vocals or any additional production. Instead, balance your tracks individually, so there is sufficient headroom (at least 3 dB) for the vocals. 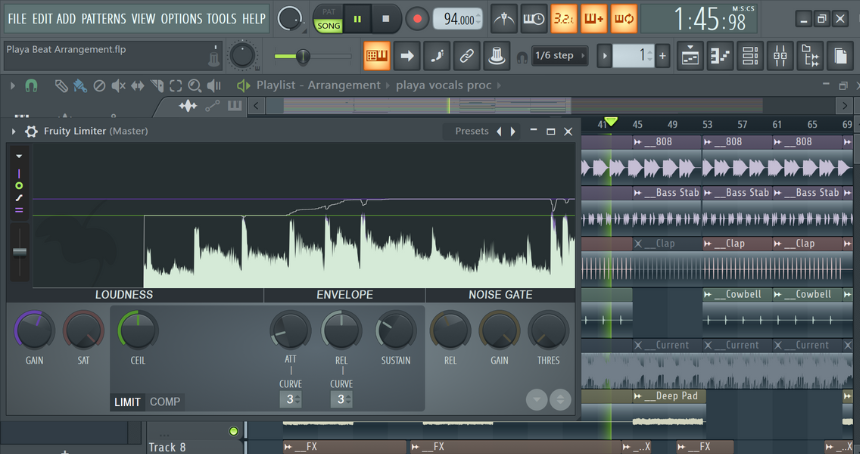 Even if the beat peaks at -1 dB TP, you can still have space for the vocals in the beat. For example, kick and snare can peak at -1 dB TP, but the instruments and synths can be less loud so that one could add vocals. However, while creating the beat, you can add a limiter, just as a safety measure to prevent the tracks from exceeding 0 dB, to protect your ears and hardware.

A limiter that you apply on the final output for mastering to boost the overall level and energy will not affect your sound quality unless you overkill with the input gain on the limiter and over-limit the track. Over-limiting the track may lead to phase issues, lack of clarity, boomy and unclear mixes, etc.

Applying the right amount of limiting on the master track is an art as much as it is a science, and you must do it carefully with proper monitoring. The best mastering engineers have sophisticated monitoring equipment, environment, and great hardware. However, too much limiting can ruin the mixing quality, and too little of it can cause your tracks to sound softer and less energetic.

However, many experienced producers and engineers use a limiter on the master channel, and many don’t, and different workflows work for them. Therefore, you must find what works best with your given environment/room and equipment. Hope the article was of help. Thank you for reading.