Today, we’ll dig a bit into the lower frequencies and answer how loud the subbass should be, how to tell if it’s too loud or quiet, and how to find an outstanding balance between the sub-bass and the kick drum.

Different musical genres demand varied subbass levels. In styles such as trap, rap, and electronic music, it’s not unnatural to have a loud sub. That reduces the song’s headroom and emphasizes its feeling. Alternatively, in pop music, it’s expected that subbass be lower in level than the kick drum. So, how loud should subbass be?

How Loud Should Subbass Be?

Subbass should be peaking at -12dB, so you keep enough headroom for the rest of the song. If mixing with headroom is not working for you, a general rule of thumb is to keep the subbass lower than the kickdrum by about 2 to 5 dB.

There are different applications for the subbass, and each requires a different approach to leveling. You can use it to sustain the song’s energy while the rest of the arrangement carries the rhythm. In this case, you’ll want it to be loud enough that the point comes through. However, not too loud as to overshadow the rest of the track. If you have a melodic subbass, you can use it to give some bottom and movement to the track. In this situation, keep the subbass at similar levels with the kick drum and use a side-chain to duck the bass when the kick hits.

In pop music, it’s not unusual to increase subbass volume when the chorus hits. That decreases the overall headroom of the track and makes the chorus feel more prominent and energic. It’s a simple yet effective technique heard in most pop hits from the past few years.

It’s essential to notice that however loud your subbass is, most home consumers won’t be able to hear it in their sound systems. They can feel it or hear that the headroom is decreased compared to a song without a sub. However, most people listening on their Bluetooth, smartphone, or TV speakers won’t hear or feel the subbass. In this case, you must apply some mixing techniques designed to help people understand that the subbass is there and how it affects the song.

One of the most used techniques to leave the subbass in low volume but still noticeable to the average small-speaker listener is doubling and filtering the information. Whether you’re mixing an 808 sound or a MIDI synth, this technique can help define the bass’s upper range while keeping the low end solid and clean. To do so, double the original subbass track and add a linear phase high-cut to one and a low-cut to the other. Both cuts must be at the same crossover frequency. 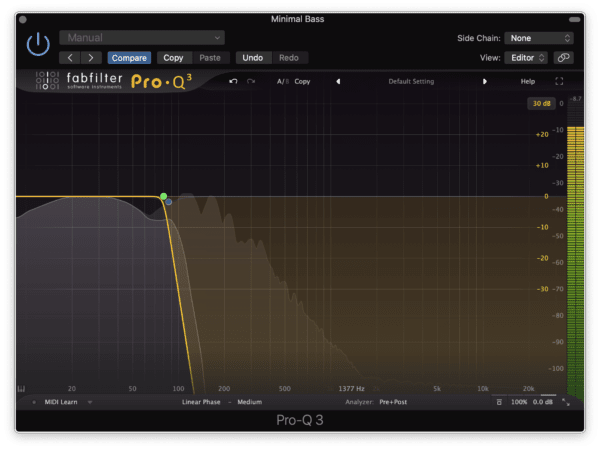 A Linear Phase high-cut at 80Hz. 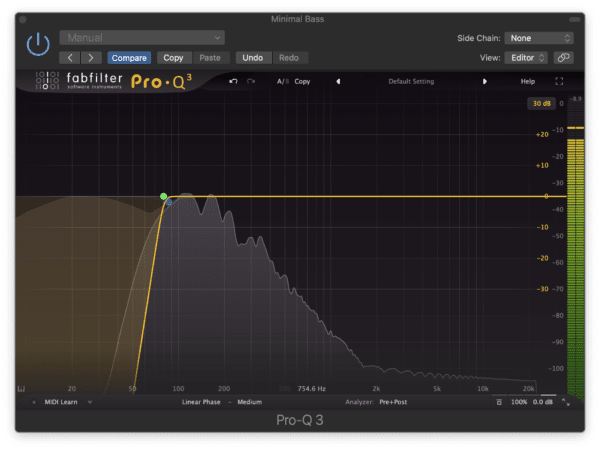 A Linear Phase low-cut at 80Hz.

After doing so, you can leave the lower frequency information with a lower volume than the kick drum in the mix. Then, make the higher frequency a little louder and broader by using a stereo enhancer plugin. The following video shows this process step by step:

How can I tell if my subbass is too loud or too quiet?

The best way to know if your subbass is at a decent level is through comparison. Reference mixes come in handy at this time, especially if you’re not very skilled with mixing subbass. Try comparing your track to at least five songs in your genre with a subbass using a spectrum analyzer. If yours is at a similar level, it’s fine.

This technique is especially great for subbass-heavy music, such as EDM, but you can also use it for any frequency range in any genre. All you have to do is load up a few references in your DAW as well as a bounce from your song. Keep in mind that the pieces you’re referencing are probably the master versions rather than the mixes, so you’ll be looking at the perfect subbass levels for the final product.

Listen to the five tracks and take notes of the range in dB that the peaks below 80Hz are hitting. Then, listen to your track and analyze the same data. If the levels are below the desired range, don’t be afraid to bring them up. Subbass is supposed to carry the song’s energy, but too little of it won’t do the trick. 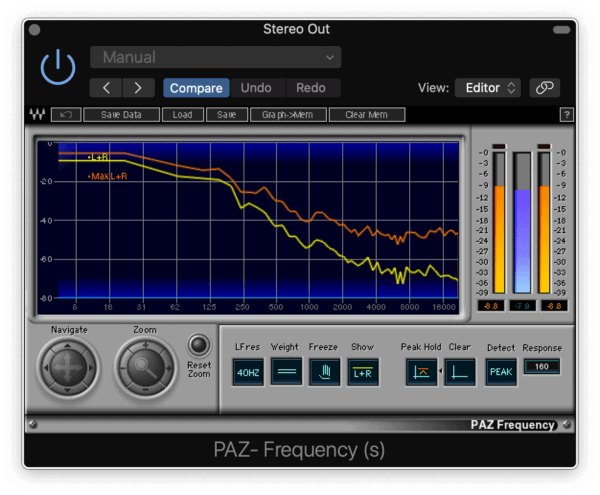 Keep an eye on your subbass levels with a frequency analyzer.

If your loudest peaks are within the range, it’s a home run. Alternatively, in case they’re louder, you’re most likely exaggerating the volume. That can be due to a lack of good monitoring in your mixing environment. Perhaps your speakers have medium-sized drivers, and you’re raising the subbass volume to compensate. In this case, it’s essential to understand your reference system and know when to stop counterbalancing it.

However, some producers might want to go the nonconformist route, and that can also be desirable. Perhaps you want some aggressive subbass to create an ethereal effect. Or you can be purposefully using a mixing technique from another music style to create a cross-genre feeling. In those cases, staying the furthest from what’s agreed as a standard dB range for your genre is vital. That way, you’ll be using an outside-the-box approach and making your productions stand out.

How To Find Great Balance between Subbass and Kick Drum?

The best way to create fantastic kick and subbass balance is through side-chaining. Set it up so that the bass drops in volume by about 2dB every time the kick hits. That will help the transients from the kick drum cut through the mix while the subbass holds the overall energy.

Alternatively, a great way to achieve insane kick and subbass balance is through EQ. Cut out the bottom below 60 Hz on the kick drum. Shape the subbass to your liking and blend it with the track until the energy fits the song. The lower bass frequencies will fill the gap left by the kick. Additionally, you can cut out some kick drum resonance at about 300 Hz to create space for the sub’s upper harmonics.

A great starting point for any musical genre is keeping the kick drum louder than the subbass. Afterward, you can automate it, so it brings more energy wherever it’s necessary. In four-down beats, it’s common for the kick to fill a big part of the spectrum while the subbass pulsates to create movement. You can achieve this through the side-chaining technique mentioned earlier. Alternatively, some Rap tracks might need a significant subbass drop to emphasize a chorus. That requires the sub to be louder than the kick, so it commands the proper attention. Whatever the case, a general rule is keeping the subbass level constant whenever you don’t need it to emphasize something. You can control it lower than the kick during verses and bring it up during choruses.

Most subbass tricks are uncomplicated fixes that can generate expressive and audible results. Mixing the low-end is all about focusing on the feeling. If the song sounds impactful, then the lower frequencies are doing their job. So, in the end, it all goes down to taste and form. Just keep it simple and think about the listener’s experience. And in conclusion, remember: do not compensate for your speakers’ lack of bottom end. Always use a spectrum analyzer to make sure you’re going in the right direction. 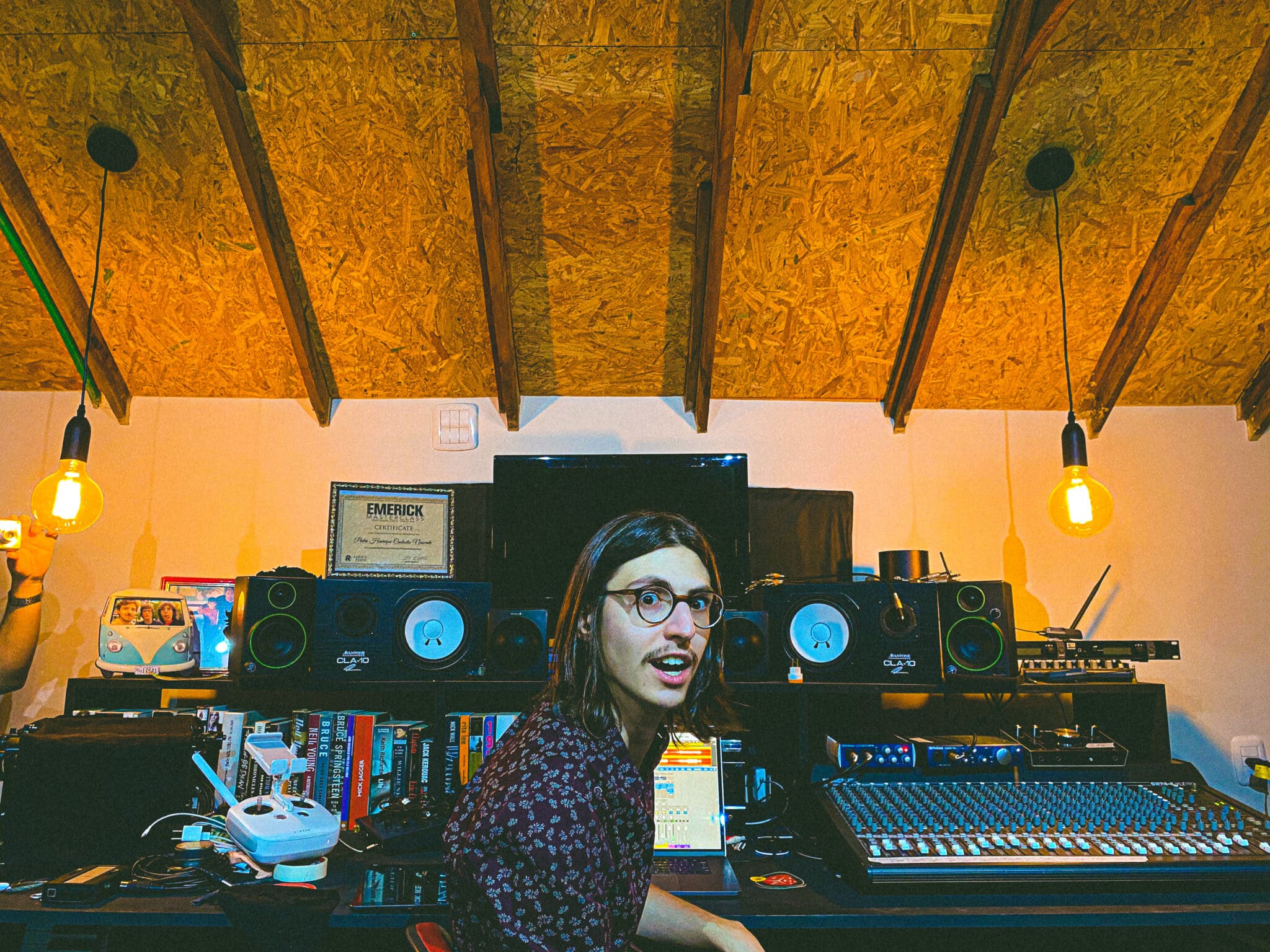 Some of the links on our site are “affiliate links.” So if you click on the link and purchase the item, we will get a  commission, but you won’t pay anything extra. This will support our site so then we can make great new content for you.