Variable compressors (or vari-mu in short) are classic compressors made up of a large number of tubes and transformers. They are often referred to as “space heaters” by producers due to the amount of heat produced by the several tubes in the unit. When it comes to sound, vari-mu compressors have a very warm and gentle sound signature.

How Does a Vari Mu Compressor Work?

Vari-mu compressors make use of tubes to control the gain reduction stage. The bias of those tubes is altered by the input voltage which results in a gentle, and rich sound signature which is comparable to optical compressors in terms of musical characteristics and sound style.

The uniqueness of vari-mu compressors comes in their soft-knee style of compression where the attack and release times are generally slower which gives a softer compression perfect for vocals and guitars. While some vari-mu compressor designs have variable attack and release times, the tube circuits within the unit help maintain a slow-attack at all times.

Additionally, the tube circuits allow the vari-mu to add a lot of compressions without much gain reduction or loss in sound character. The ratio parameter is dependant on the program whereby it increases when the input voltage increases. 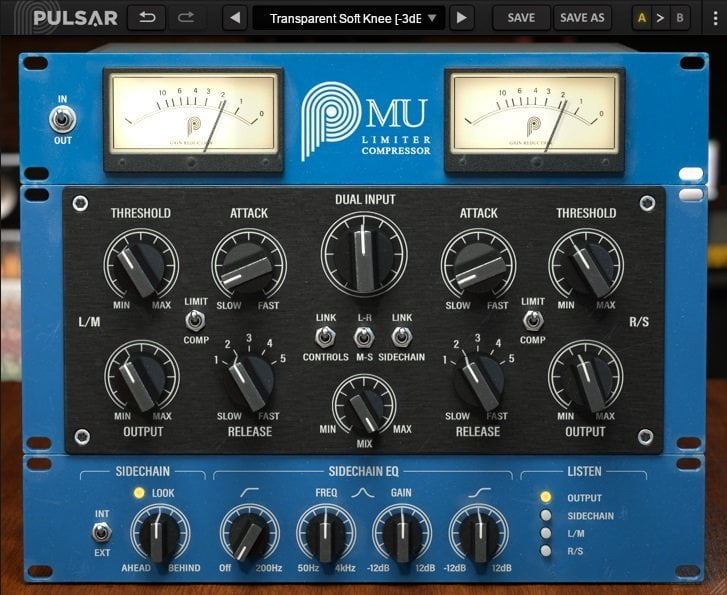 Pulsar Mu is based on the classic vari-mu compressor by Manley and is one of the most accurate emulations of that.

Just like the hardware, the Pulsar Mu can function in either L/R or M/S modes. The developers of this plugin say that it’s made for mixing and mastering, but from personal use, it can definitely be used for tracking as well.

In addition to all the features and controls present in the hardware unit, the plugin comes equipped with additional functions for better controllability and versatility. Firstly, it has an external sidechain input and a sidechain EQ with a low cut filter and adjustable mid bands and high shelf which allows for more precise control over the compressor’s response for a variety of ranges in the frequency spectrum. Furthermore, it has both look-ahead and look-behind features which is responsible for anticipating transients and treating them accordingly.

The Pulsar Mu by Pulsar Audio is considered by many engineers and producers as one of the best variable compressors and is an excellent emulation of the classic Manley Mu compressor. Its functionality makes it perfect for a wide range of applications from vocals to drums.

This impressive plugin by Arturia is a modern reimagination of the vacuum-tube powered Gates STA-Level compressor which was considered a secret tool for vocals and bass in the 50s.

Gates STA-Level compressor was a giant when it came to valve-driven compressors. The attack and release times were non-linear and rather quirky which made the compression gentle on vocals and instruments. Its amazing controls as well as its harmonically rich sound made it an instant favorite for radios and recording studios.  On the other hand, the STA-Level was a signal processor that was well-known for its addition of slight harmonic saturation to the sound which resulted in a warm and sonically pleasing character.

The plugin version manages to replicate all the features that were present in the Gates STA-Level compressor with the addition of a few more features for better efficiency and controllability. These included:

Arturia Comp TUBE-STA is compatible with Windows 7 or higher for PC and OS X 10.10 or higher for Mac. It comes in VST/VST3/AU/AAX formats and supports 64-bit systems only.

Arturia Comp Tube STA Compressor | One of My New Favorites

Overall, the Comp TUBE-STA by Arturia is an amazing vari-mu compressor that models one of the most desirable and popular compressors and does that immaculately. Its additional features transform the hardware giant into a giant in the digital world when it comes to vari-mu compressors.

The hardware version of the Manley Variable Mu compressor is considered by many to have the best implementation of vari-mu compression in a unit.

This plugin is developed by Universal Audio (UA) in collaboration with developers at Manley to come up with a highly accurate emulation of the classic compressor. The interface of the plugin is almost a carbon copy of that of the hardware and comes in 2 sections, one for the left channel and the other for the right. The main controls include; Recovery speed knob which consists of 5-time settings between slow and fast which are 8s, 4s, 0.6s, 0.4s, 0.2s. Then, you see the output level knob to be used to manually compensate for any gain loss that might occur due to compression. Next, you have the Dual Input knob which controls the input gain for both the left and right channels. Below that, you find the knobs for threshold and attack time which can be set from 25ms to 75ms.

Apart from the control knobs found on the original hardware, the plugin version also comes with a Dry/Wet control knob which provides you with parallel compression by allowing you to set the blend level of the dry and wet signals. In addition to that, there is a switch to link both channels together and a knob to control the headroom. Furthermore, the plugin version includes a M/S mode which allows you to process the signal in Mid/Side channels as opposed to Left/Right.

This plugin requires Windows 7 or higher for PC and OS X 10.12 or higher. It comes in VST/AU/AAX formats and supports 64-bit systems.

All in all, there’s no going wrong with this plugin. It is not only one of the best compressors in the market, but it also models an all-time classic which is the Manley vari-mu compressor unit.

Available in the T-Racks5 bundle, the Dyna-Mu by IK Multimedia is an emulation of a classic American compressor known for its warm sound and crystal clear colored tone.

This modern-classic compressor inherits the same characteristics of glueing a mix together at the highest quality as in the hardware unit. It fits perfectly everywhere in both the mix and the mastering chains. In addition to that, it can be used to add a distinct color to your mix through its added saturation when pushed to the limits.

The Dyna-Mu by IK Multimedia features a very simple interface with all the basic controls that can process the signal in both L/R and M/S modes. These controls include input, threshold, attack, release, and output. In normal use, the Dyna Mu is a gentle compressor with a ratio of 1:5:1. However, it can be pushed to have a medium compression with a ratio up to 4:1 by using the HARD switch.

The HARD setting is perfect for individual tracks, whereas the normal softer compression is best for mixes. Additionally, there is a GANG switch that can be used to control both the rows together. Then you have the LINK switch which controls the sidechain detection mode for the two channels and you can set it to either be linked or independent. Finally, there is the SC (sidechain) switch, and engaging this will insert a high pass filter to reduce the processor’s sensitivity to signals below 100 Hz, which makes it perfect when using it on bass or kicks.

Dyna-Mu is compatible with Windows 7 or higher for PC and OS X 10.9 or higher for Mac. It comes in VST/VST3/AU/AAX formats and supports 64-bit systems only.

In conclusion, Dyna-Mu works magic on both individual tracks and full mixes. Its medium compression allows you to use it on drums to make it hit harder and its usual gentle compression is perfect for treating your vocals to have a warm, vintage tone.

Emulating a classic compressor that goes by the same name, the Royal Compressor plugin provides you with all the tools you need to achieve that vintage, warm, analog sound of a vari-mu compressor.

The original Royal Compressor was an all-time classic and was used by several popular artists including The Beatles! Its popularity was due to its harmonically rich sound that consisted of a pleasant saturation alongside sensitive compression.

In conclusion, the Royal Compressor plugin is among the best emulations of older, vintage hardware with additional features to make it compatible with the digital market. It has a very vintage sound that a lot of users may find pleasing and is normally lesser in other vari-mu compressor plugins. 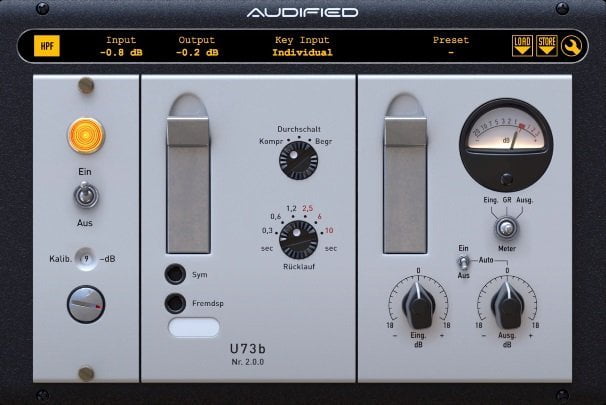 This plugin is a precise and authentic emulation of the German compressor/limiter unit, the U73b.

The U37b was traditionally used for mastering between the years 1960 and 1980. It is a vari-mu compressor and a limiter with adjustable release times and an all-tube circuitry. The plugin version of the U37b is almost exactly the same design-wise with the exception of the additional input and output gain controls to regulate the compression levels.

In addition to that, the plugin has a VU meter and selectable side-chaining. Overall, the U73b is amazing for a wide range of applications including mixing of drums, vocals, guitars, bass, as well as mastering.

The U37b is compatible with Windows 7 or higher for PC and OS X 10.9 or higher for Mac. It comes in VST/VST3/AU/AAX formats and supports both 32 and 64-bit systems.

This product by the German developers, Klanghelm is a tribute to simplistic designs and vari-mu compressors.

This plugin offers users a choice between 3 models that have different sound characteristics, color, controls, and GUI:

The MJUC is compatible with Windows 7 or higher for PC and OS X 10.9 or higher for Mac. It comes in VST/VST3/AU/AAX formats and supports 64-bit systems only.

The MJUC is known to be one of the best vari compressors and one of the best compressors in general due to its detailed design and the 3 modes that it offers. Moreover, it has a very high quality when it comes to compression. Finally, it comes in both free and paid versions which is its biggest selling point.

To sum this up, most vari-mu compressor plugins tend to generate a similar-sounding, warm, analog sound due to their emulations of classic hardware units like the U37b, Manley Mu, or the Gates® STA-Level. They differ in their controllability, additional features, as well as price. This article covers a range of plugins both free and paid that are considered to be the best vari-mu compressors in the market and the choice is then yours.

Some of the links on our site are “affiliate links.” So if you click on the link and purchase the item, we will get a  commission, but you won’t pay anything extra. This will support our site so then we can make great new content for you.