This article will show what a vocoder is, how it works, and how to use it.

Many think of performers like Jacob Collier, Cory Henry, and Justin Lee Schultz when talking about vocoders.  But, before this generation, it had been used by artists like Daft Punk, Beastie Boys, Zedd, and even Michael Jackson.

What Is A Vocoder?

The vocoder is a device first developed by Homer Dudley in 1928 to generate continuous human speech electronically. Now, for a music producer, it is a plugin that imparts the characteristics of the human voice on another sound like a synth pad. It is what generates the “robot-like” singing voice.

Dudley, an engineer at Bell Laboratories, began developing vocoders in 1928 to use electronics to replicate human speech and vocal apparatus. The engineer attempted to simulate as closely as possible the workings of the vocal tract – the way sound is emitted due to the passage of air through the lungs and other organs of the human body – using electronic components and effects.

It was not until 1939 that Bell Labs introduced a speech synthesis device called VODER (Voice Operated Demonstrator) to the public in New York and San Francisco.

German electronics manufacturer Siemens created the Siemens Synthesizer in 1959, which could convert sound into speech. Almost ten years later, Robert Moog, creator of the iconic Moog company, invented one of the first vocoders to be used in the music industry in 1968, gaining wide popularity after the legendary Kraftwerk in the album “Trans-Europe Express.”

How Does The Vocoder Work?

To function, the vocoder relies on these two sound sources:

Why Should I Use A Vocoder?

You should use a vocoder if you want an electronic or a robot-sounding voice to “sing” in your song. This effect has often been used in the electronic and dance genres, made famous by the duo Daft Punk in the modern era. However, there indeed were users before them too.

You see, the vocoder effect was created by electronic music pioneers Wendy Carlos and Robert Moog. They both manufactured vocoders, which artists utilized in various recordings, most notably in the soundtrack for Stanley Kubrick’s film A Clockwork Orange, in which the vocoder “sings” the vocal part of Ludwig van Beethoven’s Ninth Symphony.

Later, it was adapted to other genres such as pop and disco music, with the Alan Parsons Project and the Electric Light Orchestra being some of the most prominent users. And its popularity has grown ever more, hitting new heights with Kraftwerk, Herbie Hancock, Stevie Wonder, Phil Collins, Britney Spears, Michael Jackson, and Jacob Collier till our decade.

Other than that, it’s a versatile tool that you can also use for designing your bass, drums & percussions. With that said, it can be a great sound design tool. Check this video to make sure about that:

So, since the vocoder is expected to grow in popularity over the next thirty years, it wouldn’t hurt to add it to our list of “things to learn.”

The main difference between them is the level of detail you can achieve. Hardware vocoders usually have a limited number of bands, whereas modern software plugins have a large number of bands with precise frequency and bandwidth controls. However, hardware is considered more reliable for live performance.

Hardware vocoders are hard to come by these days; they’ve been phased out of the market and replaced by software.

Regardless of manufacturer or model, vocoders have comparable customizable parameters that differ mainly in the name alone. Hence, this section applies to both hardware and software vocoders. To simplify the explanation, we will be using Image-Line Vocodex, a fully-featured vocoder plugin, as an example. 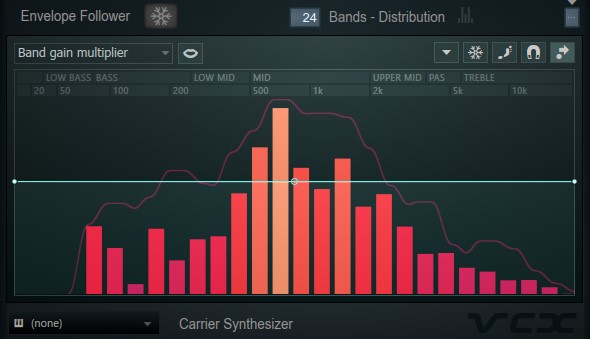 Generally, a higher number of bands delivers a clearer or more discernible sound. Hence, modern vocoders provide a very high number of bands at the expense of increased CPU resources. For example, Image-Line Vocodex has a maximum of 100 bands.

The Frequency Range refers to the upper and lower limit of the modulator’s frequency range. In essence, it is a high-pass and low-pass filter. You can use these to remove unwanted content such as ultra low-frequency plosives or noisy high frequencies from your vocal recording.

Image-Line Vocodex provides you with a node-based filter section, where you can create any kind of EQ or filter shape you like. In our screenshot above, we have created a typical, highly steep high-pass filter at 400 Hz and low-pass at around 8 kHz.

Formants are the peaks and valleys in a frequency spectrum that create vowel sounds (a-e-o-u) in the human voice. Hence, the Formant Shift parameter moves the peaks around in the spectrum to simulate the vowels. It is also used to aid the vocoder sound feminine or masculine, complementing a pitch shift.

The modulator is the audio signal that modifies another sound (usually a synth). In most cases, your voice is the modulator. However, the Modulator parameter (MOD in the picture) is the level of clean audio passing through, unaffected by the vocoder effect.

As you might have guessed, the carrier is the sound that the vocoder modifies. In general, you should stick to sounds with a lot of frequency content like a synth or an amped guitar as your carrier. As with Modulator, the Carrier parameter (CAR in the picture) controls how much it passes through.

Noise is the sibilance your voice produces when you talk. It is also called unvoiced sound. Such noises include the s, sh, t, ch, and chh sounds. You could consider them high-frequency noises that populate the 8 kHz to 16 kHz area in the frequency spectrum.

Due to their lack of pitch, these sounds are ignored and muted by a vocoder. Hence, most modern vocoders provide a Noise parameter that allows the sibilance to pass through. It uses a hi-pass filter around 8 kHz on your audio and plays it alongside the vocoded sound.

You were likely led to our article as a fan of Daft Punk, one of the most notorious artists that used vocoders extensively. The French duo introduced their intriguing, rich vocoded voice, most notably in the 2001 hit Harder Better Faster Stronger. They have since created dance, pop, and even jazz music with vocoded singing. So, if you are interested in recreating their sound, here’s a handy video:

BEHRINGER VOCODER VC340 allows you to plug in a microphone and process your voice with a range of effects in the style of the 1980s when the vocoder was widely employed not only in the music industry but also in movies, video games, and more. It uses original analog circuitry to replicate vintage vocoder sounds.

VP-03 is a tiny version of the VP-330 Vocoder Plus, one of the most popular vocoders ever made. The VP-03, a part of Roland’s Boutique series, combines synthesized sounds and human voice, employing the latest Analog Circuit Behaviour (ACB) technology to correctly reproduce the sounds that made the original VP-330 so famous. 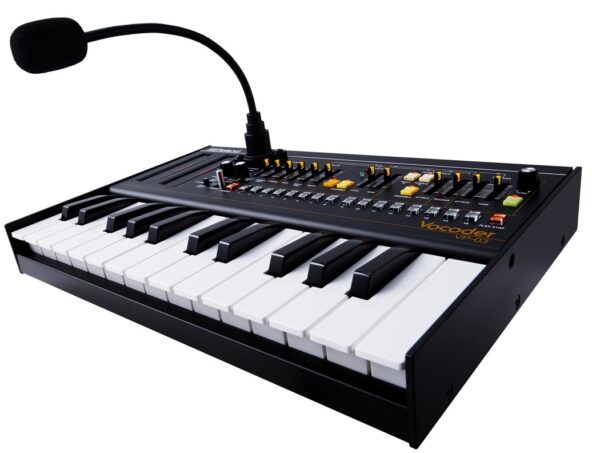 MicroKORG is a little synthesizer that offers all of the benefits of genuine synthesis and a broad spectrum of voice modulations. It has a powerful-sounding oscillator part, a knife-sharp filter section, and an amp section with amazing presence and distortion. It’s a genuine synthesizer with an analog modeling tone generator. It also includes a versatile and distinctive vocoder, 128 ready-to-use programs, a full range of effects, a freely settable arpeggiator, the ability to process an external audio source via the audio inputs, MIDI controller functionality, easy-to-use controls, and a mini-mic.

The plugin is a recreation of classic vocoders from the 1980s. A signal generator and an 11-band filter are included in the TAL Vocoder. The generator can produce a variety of waveforms, including saw, pulse, and noise.

Synthesis inspired by human speech, a vital formant creation tool, modern and robotic bit-crushing effects, vintage style envelope modulation, and immediate fullness and character controls are just a few of the features of this plugin. With a bunch of basic presets that sound decent and the ability to send midi signals to the plugin, it lets you manipulate your tracks in production work with ease and versatility.

With just a microphone and a computer, you can process the voice like a vocoder, generate vocal chops, amplify vocals, create chorus curtains, and develop robotic effects. You can also produce vocal pads, unlike any other more expensive instrument, just with this digital plugin for $200, equal to or cheaper than any hardware. 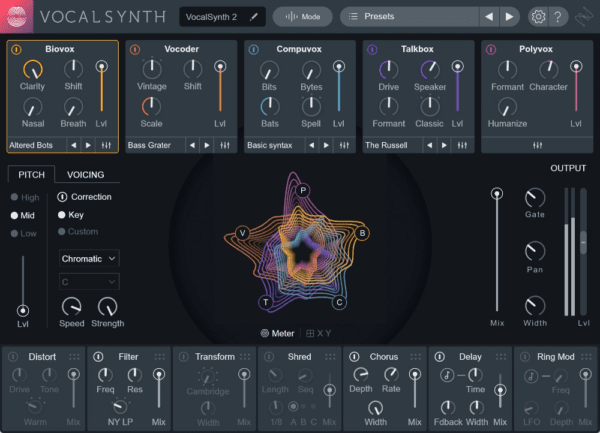 The built-in vocoder in Ableton Live can be easily integrated into the project structure and includes various capabilities like formant shifting and multiple carrier signals. You can choose which internal audio track the carrier signal is derived from if you want to use an external signal.

The modulator signal comes from the input where the vocoder track is placed.

Vocoders have been around for over 40 years in the music industry now. Yet, every time we think we’ve exploited all of its uses, another artist comes up with a new use for it. Sure, using vocoders on your voice is fun, but have you considered its use on other sounds?

Switching up the modulator or the carrier signal for an atypical sound yields the most intriguing results. One of the less-used examples is a vocoded drum part or a guitar rhythm. The possibilities are truly endless, and we hope our article inspires you to become the next frontier in the digital voice.