This time we’ve put together a list of the 9 best delay plugins for music production in 2021.

This review only covers a tiny portion of the delay plugins, but we hope it can give you a good idea of what delay is and what to look for in a delay plugin! But first, let’s answer…

What Is The Delay Effect In Music Production And Mixing?

A delay effect in music refers to an audio effect that sounds like a little echo is being played alongside the main track. Delay tools generate this effect by taking in incoming signals and playing them in duplicate form to simulate the echo effect.

How Does Delay Work?

The effect is generated by recording the signal and then playing parts of it back at different timing. Differences in delay effect types come from how the signal is repeated or how the delay tail is modulated.

What’s The Difference Between Delay And Reverb?

The main difference between delay and reverb is that a delay effect is created due to repetition in the signal after a short amount of time, and the number of repetitions is controlled by setting the amount of feedback.

On the other hand, the reverb effect is a “natural”  effect meaning the effect is created due to sound waves bouncing off of surface types that we can hear, and they make up our room acoustics like short, tall, hard, soft, etc.

How To Mix With Reverb: How Much Reverb Is Too Much?

How And When To Use Algorithmic And Convolution Reverb In Your Mix? 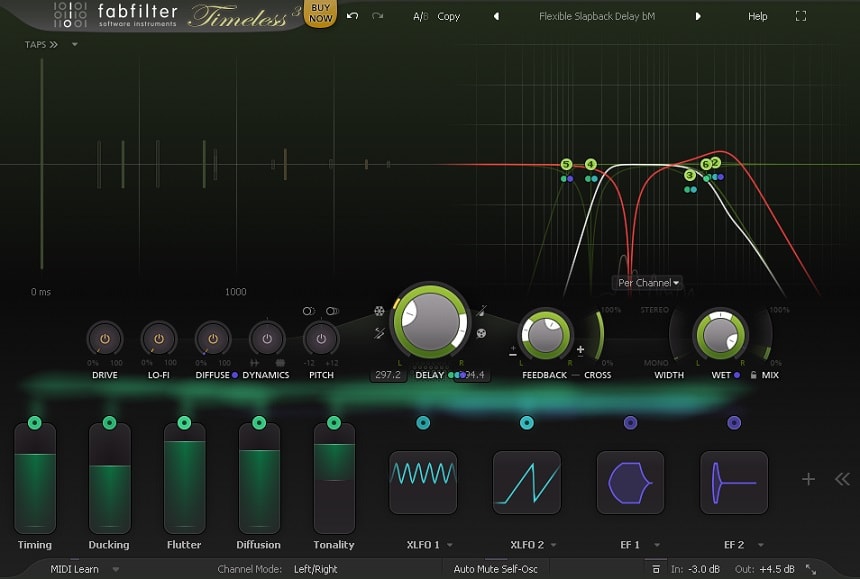 With plenty of new features and an overhauled GUI, Timeless 3 continues on the legacy of the previous version as one of the most flexible delay plugins available today.

It’s a challenge to try and compile everything this plugin can do in a short piece. The concept is that you can create a traditional delay effect using feedback or a multi-tap delay effect, both with an extensive level of modulation on just about any parameter available.

The resizable user interface of this plugin is incredible — it even shows visual feedback of your delay effect on the left half of the upper section. The rest of the section shows a frequency spectrum and an EQ to filter the wet signal.

Another parameter called Diffusion can create lush reverb-like effects easily. Furthermore, it includes various analog-sounding effects like saturation, lo-fi effect, dynamics, and tape-style pitch modulation. Similarly, you could modulate the multi-tap delay features in a very short length of time to create custom time-based effects like chorus, flanger, and ensemble. Or you could create the reverb shimmer effect by using the pitch-shifting feature along with Diffuse. The possibilities are truly endless with this one.

Almost every effect plugin developed by FabFilter is faultless, and this one is no different. The only issue it might have is the amount of flexibility it offers. However, the new GUI has made Timeless 3 user-friendly and straightforward. So, if you were daunted by the sea of possibilities before, now is the time to reconsider.

Thanks to its straightforward design and incredible sound, the Valhalla Delay has become one of the most popular delay plugins you can find.

Valhalla plugins like the Shimmer, the Vintage Verb, and the Room have all managed to give Valhalla a pretty positive reputation. The Valhalla Delay is no different. This is the first delay plugin to be released by the company despite its dabbles with UberMod and FreqEcho.

The Valhalla Delay provides you with 7 delay modes. There’s a tape emulator, HQ digital delay, and a HiFi tape echo included in the modes. In addition to that, a ghost mode adds haunting ambients by mixing some of the HiFi tape echo with diffusion that sounds like reverb and some frequency shifting. Moreover, it has 2 pitch-shifting modes called the Pitch and RevPitch.

The Valhalla Delay comes in a 64-bit format only and supports Windows 10 or higher for PC and OS X 10.8 or higher for Mac. It also comes in VST/VST3/AAX/AU versions.

Valhalla Delay does not have enough internal modulation controls that allow you to input the sound design. However, this is part of its selling point as a straightforward delay plugin useful for normal mixing and not some highly experimental and daring sound designs. 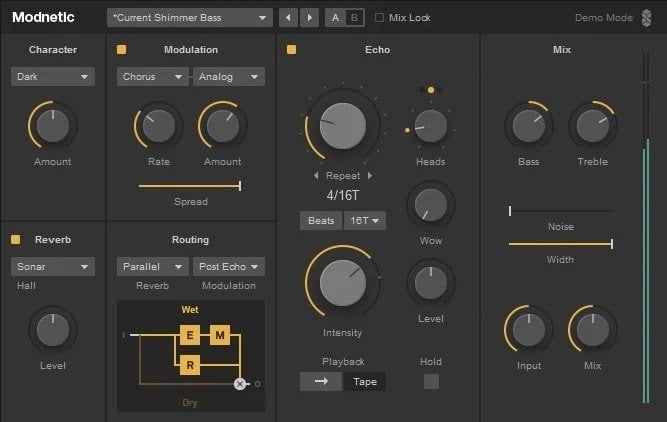 The Modnetic by Surreal Machines is a modular tape delay plugin that has a convolution reverb built-in.

This plugin runs on Windows 7 or higher and OSX 10.7 or higher. It requires core i5 processors at least and requires 4GB of RAM at least. This plugin also supports both 32 and 64 bits for all systems. Comes with VST/VS3 and AU formats.

Modnetic by Surreal Machines is an amazing delay plugin for users who aim to have an atmospheric sounding delay effect and get analog vibes from the effect.

Designed by Baby Audio in 2020, the Comeback Kid is a fairly modern delay plugin with two skins and two resizable interfaces that make it easier to use for most users.

Its most significant selling point is its simplicity and the way it’s geared towards users who do not want to go in-depth into the sound design of the effect. The interface is straightforward and uses modern terms like “flavor,” “sauce,” etc., that young producer can easily understand.

This plugin runs on Windows 7 and higher and OSX 10.7 or higher. It has support for almost all DAWs since it comes in VST/VST3/AU/AAX formats.

The Comeback Kid delay is the go-to delay plugin if you are a beginner or even an experienced producer that would like an efficient, easy, and fun to work with delay plugin that does all of the standard work of a delay plugin but in a more “modern” way. However, there is still room for many features that can make this plugin much better, like dual delay, ping pong panning, and so on. 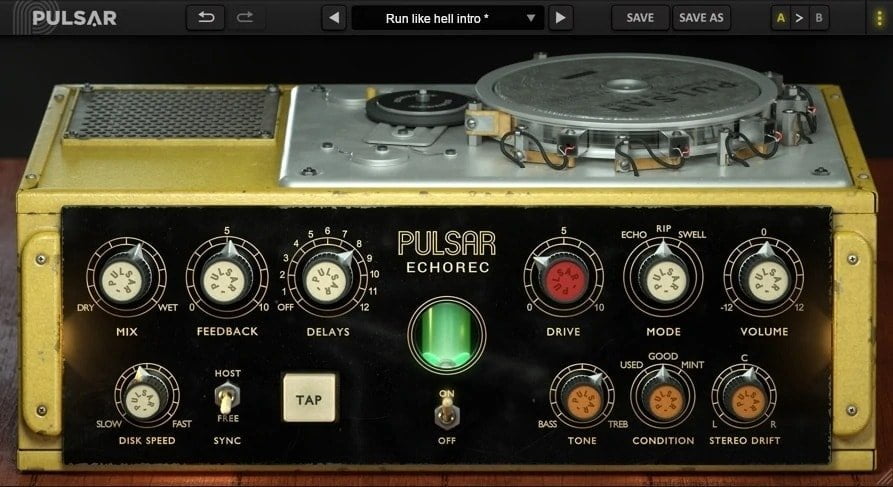 With a successful attempt at emulating the analog sound of the classic Binson Echorec 2 delay hardware, this plugin serves as a strong debut by Pulsar Audio.

The original hardware had 6 valves, each adding its own saturation characteristics. The delay feedback could also be edited to self-oscillate, thus acting like an overdub to the track. The Echorec hardware was quite expensive (can be bought at $2500 second-hand), so having it as a plugin is great.

Echorec runs on both Windows and macOS and comes in VST/VST3/AAX/AU support.

Overall, the Echorec delay is an interesting and efficient delay that is a vital plugin to those aiming to achieve the vintage, analog sound that sounds “warm” and pleasing to the ear. 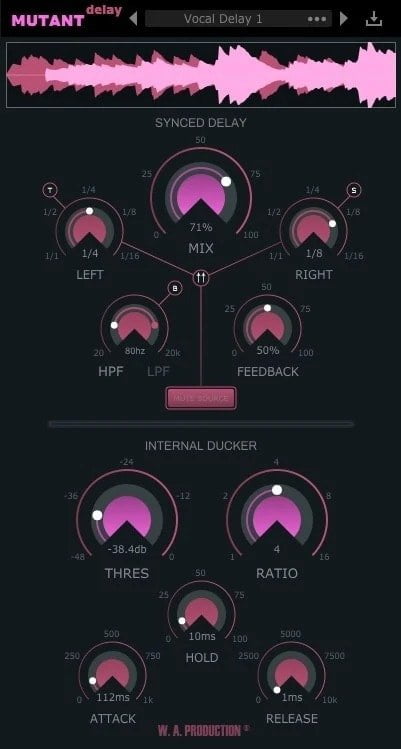 Designed specifically for vocal processing, Mutant Delay by W.A production is an interesting delay with a modern-looking interface.

The plugin has a built-in ducker which ducks the feedback level of the delay effect in the presence of the vocals, which makes the delay sounds very interesting and not clashing with the main vocals, thus maintaining clarity and definition. This is an incredible feature that requires very hectic and complex work when using normal delay plugins.

Overall, the Mutant Delay by W.A production is a plugin designed specifically to work with vocals because of its built-in ducker, which makes it stand out compared to other plugins.

Waves H-Delay is part of the Hybrid plugins line by Waves which is well known to produce the best hybrid plugins and overall solid plugins in general.

The resulting product is a powerful plugin that can give delay times of up to 3500ms along with modulation effects and filters, making it efficient in adding a simple echo effect or adding a flanger or phaser effects.

The H-Delay manages to replicate the pitch change that occurs when you change delay times which used to be the case when using old delay hardware due to the tape playback changing when you change the time.

Waves H-Delay is a popular plugin overall and works excellent due to its incorporation of the pitch shift effect as well as its time sync settings. In addition to that, the analog section makes it a go-to plugin for many users despite its hefty price tag. 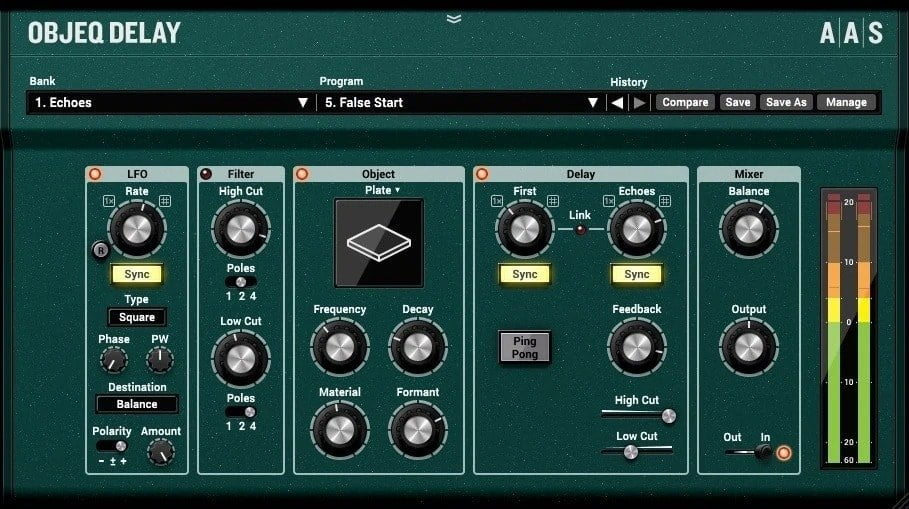 Objeq Delay plugin by Applied Acoustic Systems has a creative method of adding acoustic resonance to the delay effect, making it a unique plugin.

This plugin works by taking a dry signal and sending it through a virtual resonator (string, beam, or drumhead) before passing it to the delay lines. In addition to that, the virtual resonators are not fixed and can be changed by the user for different sound characteristics.

Objeq Delay comes in VST, AU, and AAX formats and works well with Windows 7 or higher and Mac OS 10.7 or higher. And Supports 32/64 bits.

While several users complain over the insufficient modulation controls, overall, the Objeq delay is the perfect plugin for those that are willing to add unique sound characteristics to their delay effects and experiment with it.

The former Wave Mechanics team developed a product to create a plugin to replicate the sound of a classic echo unit, EchoBoy by SoundToys, which results in an incredibly feature-packed plugin.

Soundtoys EchoBoy is extremely powerful and features a ton of emulated classic echo boxes. DM-2, Space Echo, Echoplex are all integrated within this plugin. Additionally, you get an Analog sounding preset in ‘studio tape,’ which attempts to replicate the sound signature of the Ampex ATR-102 machine.

This plugin works on Windows 7 or higher and Mac OS X 10.10 or higher. It is only compatible with 64-bit devices. It comes in VST/AAX/AU versions.

This review only covers a portion of what this amazing plugin is capable of. It is highly recommended that you use this plugin personally through its available trial and check out all the cool features it offers.

To choose the right plugin, you would have to analyze your needs and abilities. Are you an expert in sound design? Do you need a plugin where you can control the sound signature of the effect? If the answer to those questions is yes, then the D16 Group – Sigmund or the SoundToys EchoBoy are probably the go-to, and so on. Some users like the vintage sound of older hardware units, so the IK Multimedia T-Racks Space Delay or the Waves H-Delay are perfect for them.

If you are a beginner or need a straightforward plugin with the essential features that a great delay plugin should have, then the Valhalla Delay or the Baby Audio Comeback Kid will fit you well. All in all, producers need to be aware of what they need in terms of sound and not worry about the “perfect” plugin, because in reality, there is no perfect plugin. Asking yourself the right questions will most probably lead you to the right plugin.

You can obtain more information about the plugins from their official websites, whose links are placed for each review.