This article will discuss if you should sidechain your snare and in what scenarios sidechaining your snare is a good strategy.

Firstly, let’s discuss sidechaining. Sidechaining is a technique in music production in which a particular hit of a sample or note triggers another event (usually an effect/plugin) in the production. For example, the most common use of the sidechain technique is when the bass ducks down whenever the kick comes.

In simple words, we either automate the volume of the bass to go down every time the kick plays, or we use a compressor on the bass that acts only when the kick is played. This effect is called the Sidechain Compressor. Later we will also see how we can set up sidechaining in different DAWs.

Normally the need to sidechain an element to another occurs when both elements cover a common frequency range or when we want a particular element to occupy the maximum headroom. For example, in many EDM genres, it’s a common practice to sidechain the kick to the entire arrangement, so everything from synths, guitars, bass, etc., gets ducked down under the kick.

Should You Sidechain Your Snares and When?

You should sidechain the snare only if there is or are any element(s) in the mix/production that sits in the same frequency range as the snare or are masking the snare. Secondly, sometimes the snare itself needs to be sidechained by any other element that gets masked by the snare.

So whenever you want the snare to cut through the mix a little more than the other elements, you can sidechain it to the other elements in the frequency range of the snare. Hence, it’s a good idea to sidechain your snare to the guitars, pianos, pads, synths, etc., depending on the genre you’re working on.

You can also send the snare to a multi-band compressor which triggers only that particular frequency range to be compressed that is fighting with the snare. That may be complicated but can result in better sonics and dynamics. Plugins like the Pro-MB by FabFilter allow for multi-band sidechain compression.

In genres like metal, you can use a snare sample to trigger a gate plugin on a live snare recording to have the sample’s punchiness and liveliness. Similarly, you can sidechain the snare track to your electric guitars so it can cut through better.

In many dance genres, the snare is sidechained to a Gate plugin on a synth, guitar, vocal, etc., to create gated synth or gated effects. In the second scenario, where the snare may be so big that it takes over the rest of your mix, it’s a good idea to sidechain element(s) to the snare. For example, the snare is usually heavy in dubstep songs, so you can sidechain your bass and synthesizers to the snare track.

Lastly, sometimes vocals clash with the snare, and if it’s a typical pop/rock or hip-hop mix, it’s important that the vocals cut through. In that scenario, the vocals must be sidechained to a compressor applied on the snare with light compression, so the snare doesn’t clash with the vocals.

Sidechain means that an external audio signal triggers your plugin or effect and can be applied to any plugin with sidechaining capabilities. The most common use of sidechain is during compression, so let’s look at that. I am using FL Studio, but you have a similar workflow on every DAW. All you have to do is route the sidechain trigger source to the sidechain target.

Note that the sidechained signal is routed as input but not heard as the output. It’s routed only to trigger a particular effect and not be heard as an output audio signal. I am sidechaining the snare (source) to the guitar (target) in the following example.

If you’re using FL Studio, right-click on the source track, and you will see a menu on which you can select either the “Sidechain to the track” or “Sidechain to this track only.” 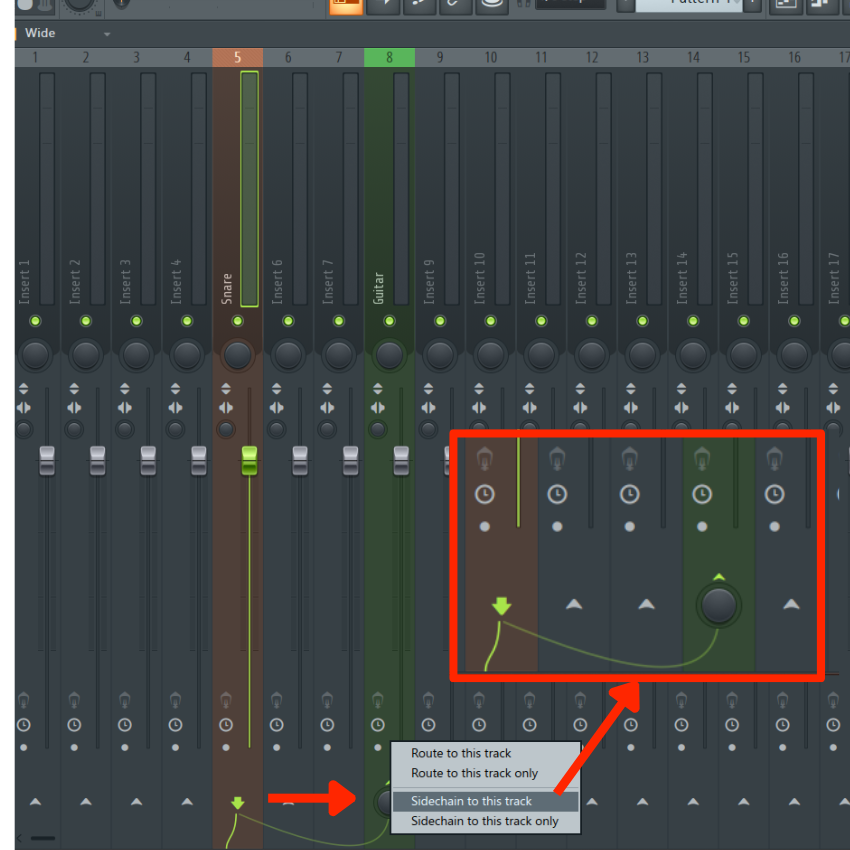 That will route the sidechained signal as an input to the target, but the signal will not be audible as the output on the target track. Next, load up any compression plugin on the track. I have taken the Pro-C2 compressor. Once the plugin opens, click on the “Sidechain” arrow, and a sidechain window will open, on which you have to select “Ext,” which means external sidechain. 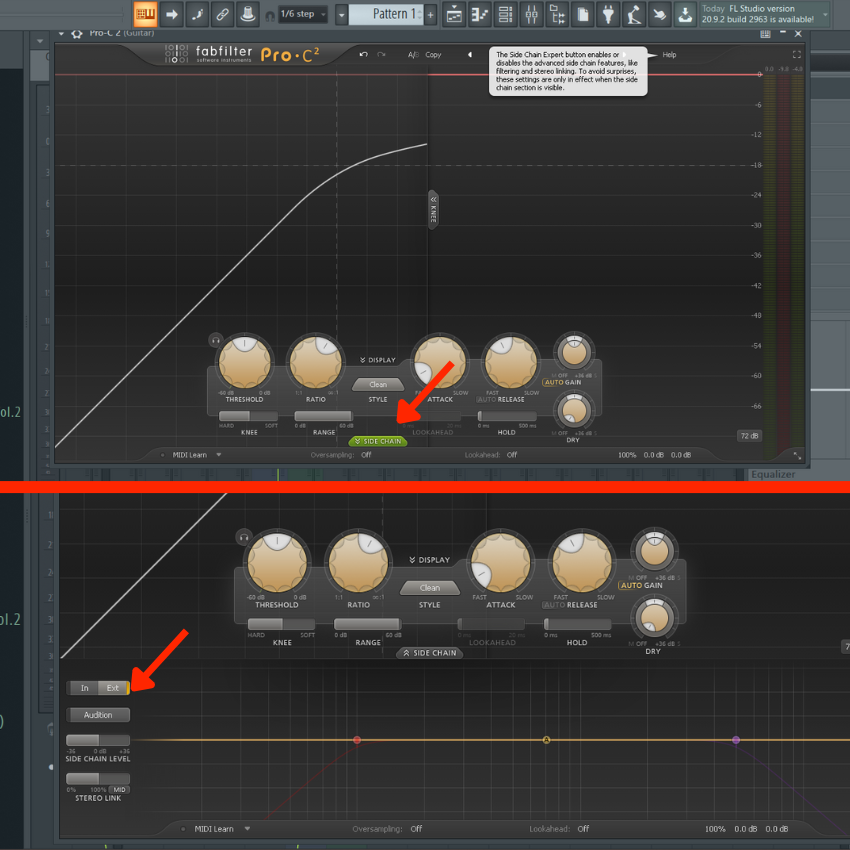 However, keep in mind to turn off “Auto Gain” in the Pro-C2 plugin, as that will apply make-up gain automatically to the compressed signal, which defeats the entire purpose of sidechaining. Instead, you can click on the “Auto Gain” switch.

However, for fighting elements, there are some other alternatives too. For example, you can automate your audio signals or parameters and get more control over your sound. Or you can use envelope shapers like Kickstart designed to gate the audio levels at specific intervals.

To conclude, depending on your need, you can sidechain the snare to a compressor, multi-band compressor, envelope shaper, gate, and many other effects plugins. Hope the article was of help. Thank you for reading.