If you’re new to the terms “Fuzz,” “Distortion,” and “Overdrive” and want to know what sets them apart and how to use them effectively, this article is for you.

Nowday’s arguably the heyday of guitar effects pedals. Many people have begun constructing their guitar pedals due to the declining cost of making music and recording. Indeed, there have always been tinkerers who hacked together circuits to create their effects and unique sounds, but thousands of boutique pedal companies worldwide are doing the same thing.

There are so many pedals available now that it can take time to choose the right one for your needs and help understand what each pedal does. Although there are no universally accepted “standards” for naming effects, each type of pedal has its own set of restrictions and constraints due to the specifics of its electrical circuit.

Let’s check out the ways in which we can take advantage of and identify these benefits.

Overdrive describes the amplification tube amps produced when they are overworked. Though a fully cranked tube amplifier produces the most transparent overdrive sound, many guitarists prefer stompbox effects pedals instead to avoid overwhelming the audience with excessive volume.

Distortion describes the result of processing an audio signal so that it becomes more distorted and less pure than the original. For example, while an overdriven tube amp will produce distortion, distortion stompboxes tend to be more extreme than their overdrive counterparts.

Fuzz is a subgenre in which harmonic overtones play a starring role. One characteristic of a fuzz tone is its tendency to boost the highs at the expense of the mids. This makes a fuzz tone more challenging to pick out of a busy band mix, yet the saturation is still unmistakable.

Typical components of a pedal include transistors, diodes, operational amplifiers (op amps), and Tube (valve) amplifiers, consisting of a preamp tube and a power section tube, before solid-state designs.

Players seeking distortion would need a boost to overload the amp, as they were created to produce a clean sound. Overdrive changes your tone by distorting it, which is why it is frequently misunderstood as another type of distortion pedal.

The bafflement is understandable, given that a typical overdrive generates some distortion when turned eleven. However, it isn’t a proper distortion pedal because it needs the proper circuitry. Compared to distortion pedals, overdrive is generally described as having a more subtle and natural sound. 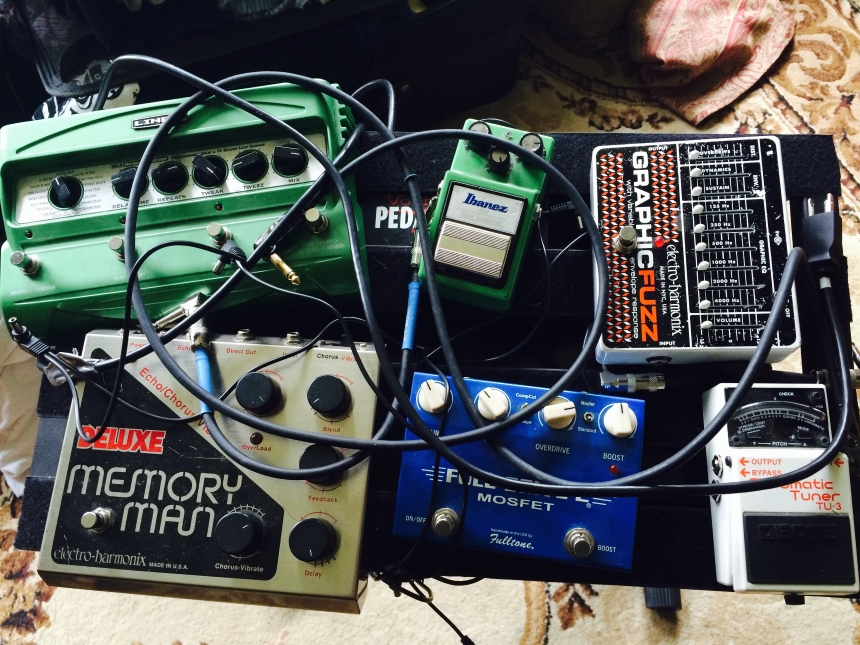 Typically, these fellas have three knobs: volume (or level), drive (or gain), and tone. Some even have bass, midrange, and treble adjustments, allowing even greater tonal customization.

Overdrive pedals will distort your signal and amplify it (if you desire). Because of this, the query “what’s the darn difference between overdrive and distortion?” is frequently posed and wholly justified.

To return to my earlier analogy, the “spiciness” or “hot” of the distortion the pedal adds to your sonic dish makes the distinction. Distortion is spicier and hotter than overdrive, which is mild to moderate.

Overdrive pedals are different because they significantly intensify your signal without altering your tone. However, distortion pedals do more than increase saturation (or “spice”); they also tend to affect your sound in other ways.

An overdrive pedal is often used to achieve that softer, rounder clipping. In addition, without getting too specific, an overdrive pedal is meant to emulate the sound of a tube amplifier that has been intentionally driven to distortion without losing its attractive warm, fat, round quality.

Overdrive circuits often employ a two-stage technique to generate this good gentle clipping. An IC (integrated circuit) op-amp is first used to amplify the guitar’s signal (operational amplifier). Diodes are used subsequently in the circuit to soft-clip the amplified signal and add harmonic content, which is the second step.

However, you may significantly alter the sound produced by an OD pedal by changing the type of diodes utilized and how they are employed. Because of this, there is a wide variety of choices available.

Ways To Use Overdrive Pedals

Aggression is the primary distinction between overdrive and distortion pedals. You might think distortion units are the aural equivalent of English football hooligans. Distortion pedals are capable of substantially greater amplitude and clip the signal much more harshly than overdrive pedals while yet keeping the guitar’s tone somewhat tight and articulate.

An overdrive pedal produces gentle clipping, while distortion effects make the clipping more severe (squarer or edgier). Many guitarists employ distortion pedals with otherwise unprocessed amplifiers to take advantage of the enormous gain they provide. A few guitarists, however, have found great success by placing a distortion stompbox in front of an already overdriven amplifier.

Ways To Use Distortion Pedals

The first distortion effect implemented as a pedal was Fuzz, which was meant to simulate a broken amplifier or speaker. Unfortunately, your signal is being completely cut; therefore, changing the amp settings won’t help.

Fuzz pedals amplify your signal using transistors rather than op-amps, like overdrive and distortion pedals. Transistors are inherently low-fidelity compared to hi-fi op-amps since they add a lot of harmonic content to your signal during amplification.

You can significantly alter the Fuzz’s tone by switching out the transistor in the circuit. Generally, germanium transistors create a darker, more aggressive fuzz, while silicon transistors provide a brighter, smoother fuzz.

The silicon transistors in the MXR Super Badass Variac Fuzz give it a sharp sound. While similar Dunlop fuzzes exist, this one stands out thanks to its Variac control, which lets you modify the available voltage and, by extension, the amount of headroom.

You can adjust the variable-speed motor’s output voltage between 5 and 15 volts. The 5v setting is depicted here in this illustration. Peaks have been drastically reduced. Your signal will make a horrible splatty noise as it slams against the rails, as there is not much room to maneuver.

Increasing the voltage to the standard 9v softens the edges, but the peaks are still squashed against the rails. The Super Badass Variac Fuzz is as loud as a chainsaw during a thunderstorm when set to this intensity.

More so than most fuzzes, this pedal can handle higher voltages at 15v. What you get is an overdrive-type signal that is incredibly transparent and smooth, much like what an op-amp and diode combo in a pedal like the Double Double Overdrive would generate.

Transistors’ ability to generate harmonic content makes diodes superfluous for clipping the signal, but that doesn’t mean you can’t use them together for even more extreme clipping and saturation. For instance, the Way Huge® Russian-PickleTM Fuzz uses a combination of silicon transistors and silicon diode clipping to produce a whole, groovy tone with a prominent midrange.

Ways To Use Fuzz Pedals

overdrive vs distortion vs fuzz on Bass (GSS)

These three effects, taken together, allow the amplifier to produce more distortion. These effects have significantly evolved in recent years, proving their usefulness in rock and metal scenes.

To summarize, overdrive pedals let you get an overdrive effect at a lower volume without blowing the windows out of the venue you’re playing in. The distorted signal produced by a distortion pedal is typically more pronounced and less pure than the original produced by your amplifier’s tube preamp. The well-known Fuzz effect is crucial, as it enhances the highs to imitate a damaged amplifier.

There is no best, good, or wrong in matters of tone. Ignore the views of others and do what you think sounds and feels best for your style and sound. Do what seems right, and don’t hesitate to try new things. Strange or counterintuitive pedal configurations might yield unexpectedly beautiful results.