This article will discuss how to create Ambient Music in FL Studio.

Firstly, let’s discuss what Ambient Music is and give you a little background on the musical style that has emerged over the last few decades. Then we will discuss the musicality and process behind creating ambient or chill Music in FL Studio, along with different synthesizers, instruments, and effects plugins you can use.

Ambient Music, generally, highlights and focuses on the tone, mood, and sonic atmosphere over anything else. Stylistically, it’s usually sparse, airy, and easy on the ears and uses atmospheric textures to describe the space. For example, it may use rain sound or the sound of a park, or an old vinyl cracker sound to display the ambiance.

Mood-wise, it’s usually calm, relaxing, light, and contemplative and great for passive and active listening. You must have heard the music when you look for “relaxing music” or “study music” on YouTube or Spotify. Elements in the genre are generally washed in reverb, delay, and other time-based effects.

The term “ambient music” was coined by the British music composer, producer, and engineer Brian Eno in 1978. The genre has evolved from using electronic synths combined with natural sonic scapes, drones, and tonal beds with repeated and sustained notes and has inspired almost every genre and style of music.

Eno quoted, “Ambient Music is intended to induce calm and a space to think. Therefore, ambient Music must accommodate many levels of listening attention without enforcing one in particular; it must be as ignorable as it is interesting.”

How to make Ambient Music in FL Studio

Depending on the ambient genre you’re creating, you will select the chords, tempo, and melody. First, however, we will consider a general outlook toward creating ambient Music, keeping in mind that there are no rules in Music, and in art, rules are usually meant to be broken. So these are just rules of thumb and not rules.

So after analyzing several Ambient music playlists on Spotify, we have concluded this. Ambient songs are usually low on danceability, energy, liveliness, valence, and speechiness, and high on instrumentalness and acousticness. In addition, the tracks tend to have fewer lyrics-based vocals and more instruments. The lack of lyrics-based vocals is because these songs aren’t meant to distract.

Secondly, these arrangements are usually studio recorded or electronically produced rather than being a live performance. Also, you need not follow the conventional arrangement of an intro going into verse into the chorus, and so on, to create ambient Music. It can be freely arranged.

So usually, the tempo is low, and these songs aren’t as upbeat, as these are meant to be relaxing, calming, and non-distracting. So if you’re starting a song, anywhere between 70 and 89 BPM would be a good place to start.

Minor keys are found to be used most commonly in ambient songs. Usually, moody chords, like minor seventh, major ninths, major sixths, minor ninths, etc., are used. Most of these chords don’t imply a specific emotion, as they have a mix of major and minor.

For example, Am9 has notes: A, C, E, G, and B, which includes A minor, C Major, and E minor triads, and hence has the flavor of three different chords in one, which gives it a mixed feeling.

Secondly, movements have to be smooth. It would help if you used inversions and voicings, so there aren’t big jumps in notes. For example, when you go from an Am9 to FMaj9, you transition from the notes A, C, E, G, and B to F, A, C, E, and G notes. So it would be better to use such inversion and voicing of the FMaj9 so the transition becomes smoother. 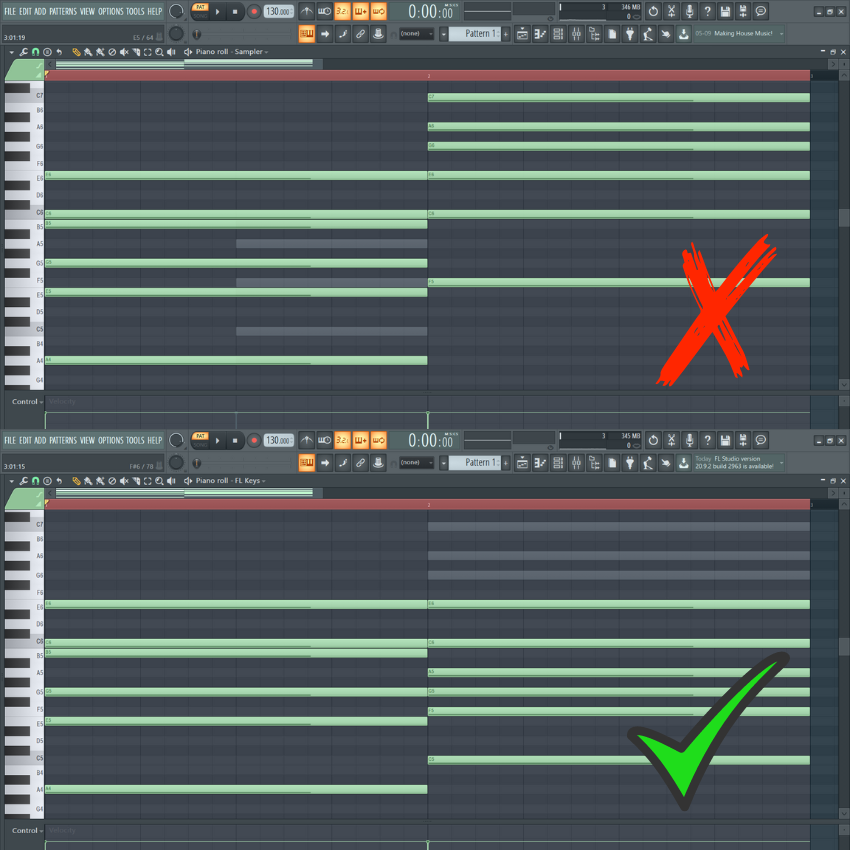 Thirdly, the chords should be at least a bar long, as ambient songs are usually slow. So you could choose any chord progressions, like I-IV-v-V or i-vi-VII-v; you can create deep lush intervals by using harmonic chords and adding colorful sixths, sevenths, and ninths on the chords. However, triads also often work fine if the sound selection is good.

Lastly, melodies are usually slow and spread out in ambient Music. They are not as rhythmic and repetitive as vocal-oriented or pop/rock melodies generally are. Chords and melodies in ambient Music do not repeat themselves structurally in the way jazz, pop, and rock melodies and chords do. Sometimes, you may use a simple note like a drone to highlight the atmosphere, which could be sufficient.

Instrumentally, ambient music uses electronic instruments, synthesizers, and synthesized or physically modeled instruments like flute, Guitar, etc. Any instrument that sounds mellow, easy on the ears, and light can be used. Hence, a simple grand piano, an electric piano, or a Rhodes piano could also work to lay a tonal bed.

In FL Studio, you can use the stock Instruments Packs of Close Grand, Electric Piano, Grand Piano, or Rhodes. These are DirectWave instruments and model pianos well. It has a great quality sound. 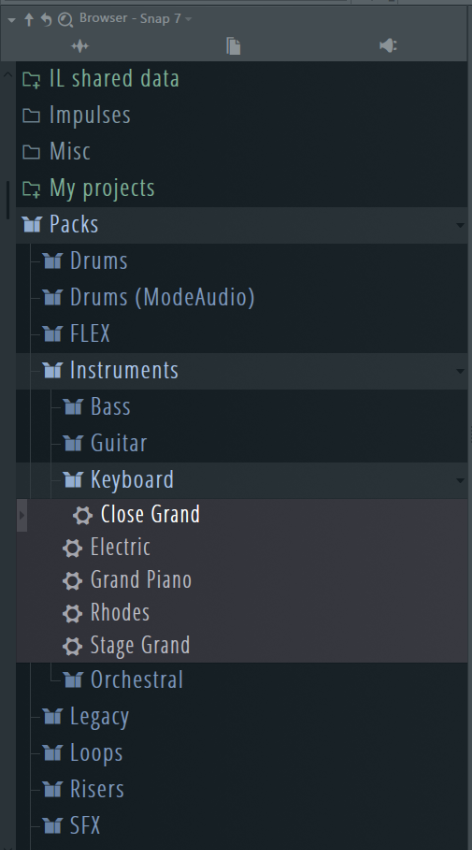 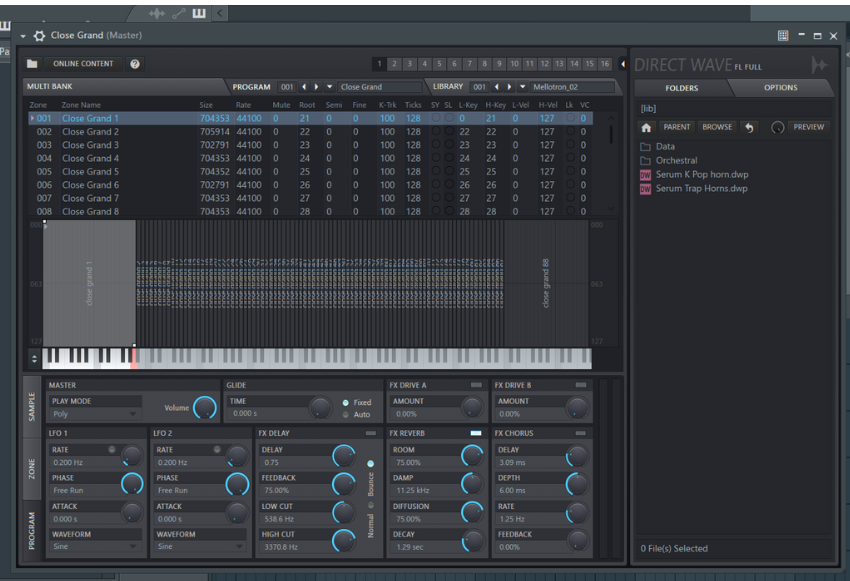 The more unique textures, tones, and atmosphere you add to your production, the better. For example, you can use a sample of rain constant throughout your arrangements, or you can use chimes or glockenspiel if you’re going for a more nostalgic vibe. So let’s explore that deeply.

You could use the following virtual synths for atmospheric and ambient sound design: Novum, NI Ethereal Earth, Holy Ambiences 3 by Soundiron, Native Instruments Arkhis, Baby Audio Spaced Out, etc. You can read the entire list here. Some other soft synths you can use could be Xfer Serum, Spectrasonics Omnisphere, Nexus, Iris 2 by Izotope, Synapse Dune 3, etc.

Further, Output Exhale is great for vocal chops and creating lush ambient vocal textures, and Output Substance is great for deep analog bass and sub-bass drones, basslines, and textures. Lastly, you can use tools like Scaler by Plugin Boutique for writing and composing interesting chord progressions.

Now, we gathered various free plugins that will come in handy for making ambient vibes:

You can find some great ambient tracks for different kinds of spaces on YouTube and Soundcloud, whether it is a beach, mountain, forest, city soundscapes, traffic, etc. You can also check out the BBC sound effects library, which has great sounds with categories like Nature, Transport, Daily Life, Military, etc. You can also find spacey and atmospheric sound samples on Loopmasters, Cymatics, etc.

You can check out the list of best ambient-chill sample packs here. Regarding drums, you can use the samples or sounds as per the genre you’re going after, whether it is ambient pop, chill/lo-fi, ambient house, etc. However, I recommend using light drums instead of hard-hitting drum sounds in conventional EDM, pop, and hip-hop productions.

Get Some Free Samples & Presets:

Here are some resources where you can get free foleys, textures, effects, and drum one-shots/drum beat samples:

Likewise, here you can find samples & presets for pads, synths, leads here, and maybe some drums as well:

We will go through a step-by-step guide in which we will create a short (20 seconds) Ambient Music loop. We will use an example where I create the loop from scratch. So let’s dive right into it.

Ambient Music has gained a lot of popularity over the last few years, whether it is for film soundtracks or sound design, or for game sound, or Music to relax or chill. In addition, people listen to ambient Music on YouTube and Spotify for studying, reading, meditation, yoga, cooking, or anything.

The good thing about it is that it doesn’t fight for your attention like everything on media otherwise does. It lets you be and focus/concentrate on whatever you want, and it doesn’t feel like a task. It also has had healing and therapeutic effect on a lot of people. So in the article, we discussed how we could create that vibe with the tools we have on FL Studio.

We have discussed everything from the tempo to chords, melodies, instruments, synths to use, etc., to create music that affects people positively. Many artists/musicians, like Cigarettes After Sex, Pink Floyd, Hans Zimmer, Porcupine Tree, Radiohead, etc., have utilized many elements from this style in their creations to create great artistic works!