Do you want to create a demo for your rock or metal band but feel that your VST drum track doesn’t sound real? Today we will talk about how you can increase the realism of VST Drums.

To get decent live drum sounds is a challenging endeavour. You must consider the space’s acoustics, the microphones to use, where to place the mics, and other factors. Most of us need more room for a thoroughly mixed drum kit in our home recording studio.

Using MIDI drums or sampled drums is considerably less complicated (and cheaper).  As live recording drums on every track may be costly, time-consuming, and complex, many people resort to this practice instead. MIDI drumming is becoming increasingly commonplace, yet many listeners claim they can still immediately identify the difference from a live performance.

Below we’ll talk about how to make VST drums sound real and whether they can really replace acoustic drums.

To make VST Drums sound real, you need to understand precisely what it means to be a drummer; once you learn to think like a drummer, you’ll understand how to program VST drums to sound more natural. The possibilities are endless regarding virtual drums; they are the most accessible instruments to digitize.

Quantization, a feature used in DAWs and drum machines that bind beats to a grid, is a simple fix that can kill the energy of a performance. As an alternative to spending the next 10,000 hours, here are some quick methods for adding that real groove to your tracks.

In reality, drummers perform by feeling their way around the kit and letting their bodies guide their expression. Ghost notes are rhythms played at such a low tempo that they cannot be heard clearly by the listener.

Despite their lack of audibility, these ghost notes are present in every real drums recording session and should be recreated in your DAW. To achieve this effect, you can use a groove preset or insert ghost notes into a drum loop. In addition, some DAWs also provide useful presets for MIDI grooves, which you can use to create VST drum tracks quickly.

Increasing the velocity is a key method for giving MIDI drums a more natural sound. Constantly playing a quarter note is dull. The velocity of a MIDI note represents its relative loudness. Make use of the fact that velocity can range from 0 to 127.

For instance, the snare roll that introduces the chorus can begin at 50 and continue for the entire duration, which you can set at 127. Instead of being overwhelmed by the constant high speed of the snare, the listener will be able to anticipate what’s coming next. 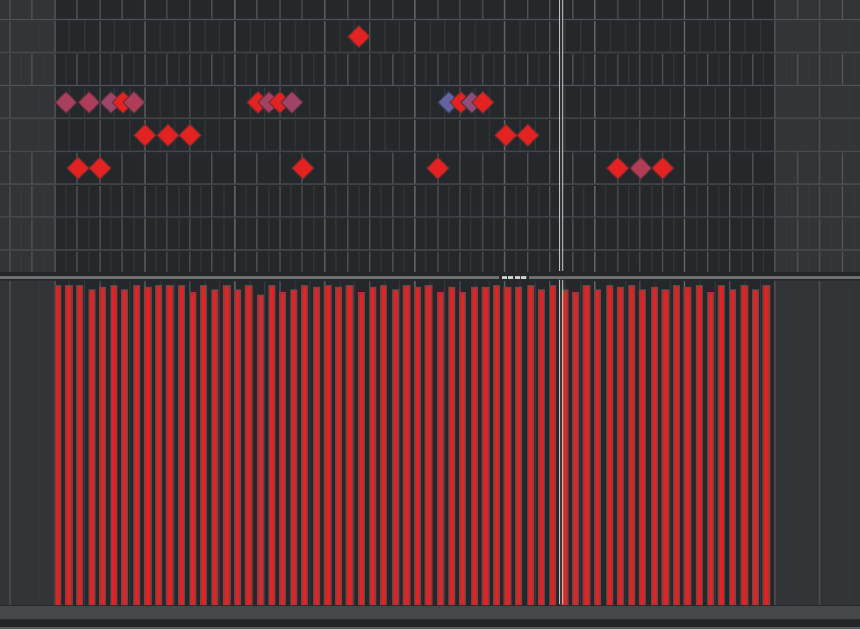 Let’s say you’re using a digital audio workstation to program a hi-hat pattern or a tom roll. An appealing sound sample would be the first step in this process. However, the pattern is likely to come off as mechanical. This will occur because you must consider that real drummers use both hands when playing quick patterns like paradiddles.

Duplicating the tom sample, you’re using and making tiny adjustments to the sound will allow you to give the impression that two hands are playing a quick tom roll inside your computer. One standard method is to raise or lower the pitch of one of the sounds by a small amount. Somewhat less extreme than complete stereo, adding a panning distance can also have a noticeable impact.

Actual drummers never play the same 1-bar rhythm repeatedly, even if they are becoming tired of it. Instead, use loops at least 4 bars long to add reality to your programmed beats. This doesn’t imply that the groove you create must feature constant alterations.

Each bar of the loop can have the same basic rhythm, but you can vary the groove slightly to keep things fresh. Taking out the kick in the second bar, relocating the snare to the end of the third bar, or adding a snare roll to the last part of the loop are all simple ways to accomplish this.

Fortunately, some fantastic virtual instruments are explicitly created for producers attempting to emulate their favorite rock and metal beats within their DAWs. Two of the better possibilities are Superior Drummer 3 and XLN Audio Addictive Drums 2. Rock drummers also have a soft spot for Steven Slate Drums 5, and Toontrack EZDrummer 2. 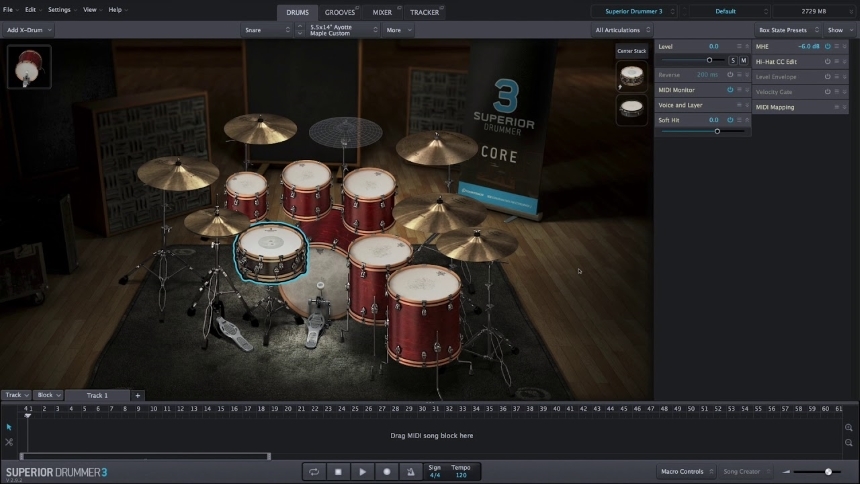 In contrast to the MIDI drum loops recorded by your DAW, real drum beats are rarely in perfect time and rarely maintain a constant volume. This is where tweaks to speed and timing come in handy.

To change the volume of individual drum hits in a drum loop, or “velocity,” most DAWs make it simple to adjust individual velocity sliders. Even minute variations in tempo can transform a static drum loop into a real drummer’s lively, human-like rhythm.

In contrast to your computer, a real drummer will only sometimes crank up the snare drum volume to eleven. One straightforward approach to add some humanity to a drum loop that sounds too robotic is to make one snare slightly louder than the other.

One technique to simulate the inevitable little mistakes made by real drummers is to make slight variations in the pace of your beats. Timing adjustments should be cautiously made to avoid completely throwing off the song’s speed, and milliseconds should be added or subtracted.

Most drummers will mentally “sing” the rhythm they want to play before actually playing it. You may replicate this environmentally conscious method of music production within your DAW. You may program a rhythm by “singing” it in your head first.

While many beatmakers now use their ears as a backup to their DAW grids, many still rely on them. Try recording it first using your voice to avoid going against your natural impulses when programming a beat.

In any case, the point is to have some aural reference of the beat you want to compose before you start working on it, beatboxing talents be damned. Making sure the drums are built on a catchy, “singable” rhythm will make your music sound much more natural and polished.

One of the most common programming blunders is overusing a sound or effect in a rhythm. There’s no physical exertion required to trigger the beat, so it’s tempting to build an ever-more-complex cluster of sounds.

Please don’t fall into this trap by playing more than four sounds at once; a professional drummer can only use four of their eight limbs. You can avoid overly complicated, artificial, and unrealistic beats that only a computer can play by taking into account the limitations of a real drummer during the beat-composition process.

Studying drum notation and becoming familiar with the structure of sheet music for drum grooves could prove helpful when learning to program MIDI drums, similar to composing drums on paper.

With this, you may easily access millions of actual drum grooves to utilize as examples when producing your own. Although it may seem obvious that an electronic producer should learn about drums to program better, we cannot overstate the value of knowing how to read sheet music, especially in the context of drums.

How To Improve VST Drums Mixes To Sound Real?

Can The VST Drums Replace A Drummer?

A software drum recording can never replicate the excitement and “feel” of a drummer. However, the real drummers are still incomparable in creating dynamic performances with a solid groove and exciting energy, as acknowledged by musicians everywhere.

However, hybrid drum sets provide a compromise between the two when playing live. These kits incorporate electronic and acoustic drums into a single set, allowing drummers to transition easily between acoustic and electronic drumming styles.

If, for instance, a verse requires a clap sound but the chorus calls for a more powerful, open hi-hat beat, hybrid kits provide solutions for both situations. Most cases, this is accomplished by positioning drum triggers or electronic pads next to the acoustic drums.

Superior Drummer by Toontrack is just one example of a product that can help you create drum performances virtually inaudible to the human ear. In many cases, getting drum tracks is much more cost-effective than hiring a professional musician, provided you know the drum patterns you want to employ in your music.

But you should still use a session drummer for your recordings. Compared to drum software, employing actual drums can significantly impact a project. Although there are benefits to using virtual drumming software, there are also some downsides.

For starters, it’s a complex instrument requiring some training time. Let’s pretend you have yet to do much in the way of music creation before. If that’s the case, you might find yourself distracted from your primary goal—composing music—by the time it takes to master drum programming.

Finally, it’s worth noting that while drumming software is capable of producing realistic-sounding drum beats, the cymbals are typically unrealistic. Being so responsive, cymbals require fine-tuning velocity and timing to get the desired effect. Overly polished cymbals are a telltale sign that producer didn’t use a genuine drummer.

These days, many recording artists and producers favor using VST Drums in their final mixes and released tracks. Nowadays, it’s unheard of to compare electronic drums to traditional acoustic ones. Instead, many manufacturers, including GGD, provide compressed drum samples that eliminate any sense of reality.

If you want to stop this from happening, use a plugin with all the required features. After that, it’s crucial to start approaching things like a drummer would, as familiarity with such plugins can grant you several benefits, such as creating demos that are readily accessible to your bandmates.

The question is whether drum machines are obsolete today and whether VST Drums can take their place; it can be done only if a drummer plays them. When considering the room they are recorded in, acoustic drums can sound completely different. On the other hand, accurate drum recordings may be rather costly in the modern era, so we can see why some artists might want to use sampled drums instead.

We hope this article has given you the mentality of a drummer to make the most realistic possible programmed drums.