This article will discuss how loud your Master should be and provide key facts and tips.

Many producers and engineers have doubts about how loud you should master your song, and nobody has a fixed answer. But we will break it down step by step and guide you on the loudness of masters, mixes, beats, etc. The answer varies for different mediums and platforms.

However, first, let’s talk about LUFS, which stands for Loudness Unit Full Scale. LUFS is a standard measurement of loudness in the music and audio industry, which quantifies the perceived loudness of music by analyzing the average loudness over some time. LUFS was a result of a phenomenon called Loudness Wars.

All audio platforms, whether streaming, radio, television, etc., accept audio at particular LUFS ratings. The guidelines for each audio platform are different in terms of LUFS. For example, Spotify accepts audio at a LUFS rating of -14 dB LUFS.

The second measurement you should know about is the True Peak rating. The True Peak rating is the maximum amplitude a signal reaches. Further, LUFS can be integrated/long-term (> 20 seconds) or momentary/short-term (< 5 seconds). LUFS is considered superior to u/v meters, RMS ratings, and other digital loudness measurements of loudness.

How Loud Should Your Master Be?

Your masters can be about -14 dB LUFS loud, as that is the required loudness for most streaming platforms, including Spotify and YouTube. However, you can export louder songs (-7 to – 9 dB LUFS), so it can compete with the existing loud and energetic industry-standard masters. 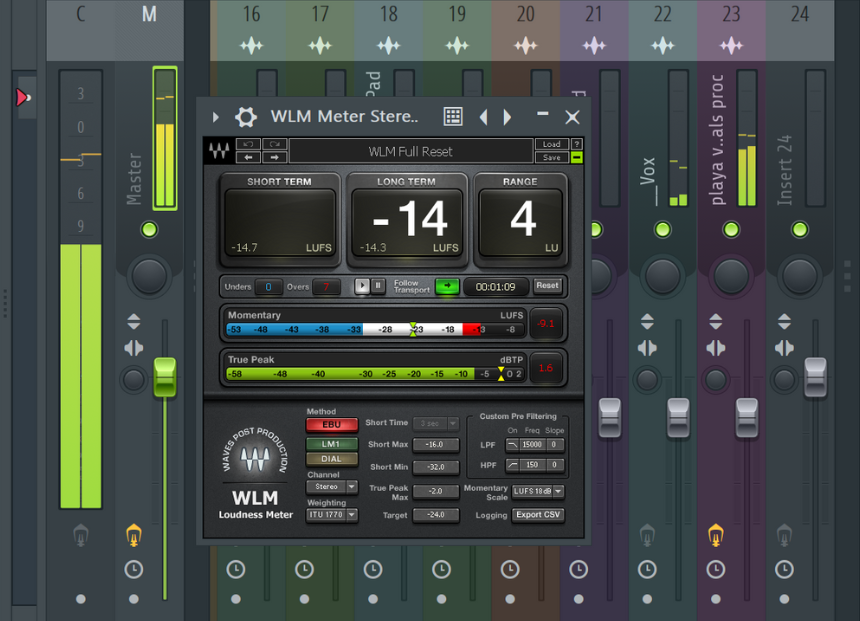 Now let’s explain this answer. In my experience, whenever I’ve followed the -14 dB LUFS rule to export the tracks, I’ve experienced that my mixes sounded softer compared to other tracks on the platforms. But, on the other hand, when I rendered the tracks to the loudness of my choice, compared with reference masters, they sounded loud enough on the streaming platforms.

Streaming platforms mention that they apply compression to any audio that is louder than the standard LUFS rating specified. And the compressor they apply may or may not suit your Master. So it’s up to you whether you want to follow their specifications.

With that said, masters of -10 to -6 dB LUFS of loudness should be sufficient such that your masters don’t sound soft or less energetic compared to other songs on the platform(s). But for acoustic, classical, ballad, or singer-songwriter records, you can have a higher dynamic range, with a loudness of about -18 to -14 dB LUFS.

Here are the LUFS ratings specified by the major audio platforms:

Here are the mastering ratings (before uploading for distribution) of the song Dream Girl by babyface, at which the mastering engineer exported the track. The song is mastered by Donal Whlan at Masteringworld.

From the ratings, it is clear that Donal, a renowned and highly experienced mastering engineer, did not follow the LUFS specifications by the platforms, yet the song sounds competitive, crisp, clear, and professional on all platforms in terms of loudness and energy.

However, note that everything we have discussed concerns music/audio streaming. But the same answer will differ for films, skits, podcasts, etc. For example, movies and TV shows have a higher dynamic range and have about -23 dB LUFS of loudness.

On the other hand, radio has a lower dynamic range, and the audio played on the radio is often compressed. Podcasts are kept roughly as loud as songs/music because they are consumed on the same digital mediums. Similarly, ad films placed on television have different standards of loudness.

How Loud Should You Master Your Beat?

You should master your beats at a loudness rating of less than -14 dB LUFS (peaking at -1 dB TP) so that the beat has sufficient space and headroom for the vocals or any other additional arrangement. About 4 to 8 dB of headroom should be sufficient for vocals and additional production.

Given the genre of the beat is pop, hip-hop, R&B, EDM, or their derivative(s), you can follow the above rule of thumb. However, beats are treated differently than final tracks. Beats can have softer and quieter parts. Beats can peak at – 1 dB TP and still have space for vocals. For example, drums can peak at -1 dB TP in the beat, while the instruments (synths, guitars, bass, etc.) can be softer.

For example, the following beat peaks at -1 dB TP with a loudness of -14 LUFS. As you can see in the images below, the instruments (synths + pads + guitars) bus has a LUFS rating of 24, peaking at -9.9 dB TP.

Whereas the kick (image below/after) has a LUFS rating of 10, peaking at 0.1 dB TP, thus leaving plenty of space for vocals between the kick and the instruments, and hence the overall beat. 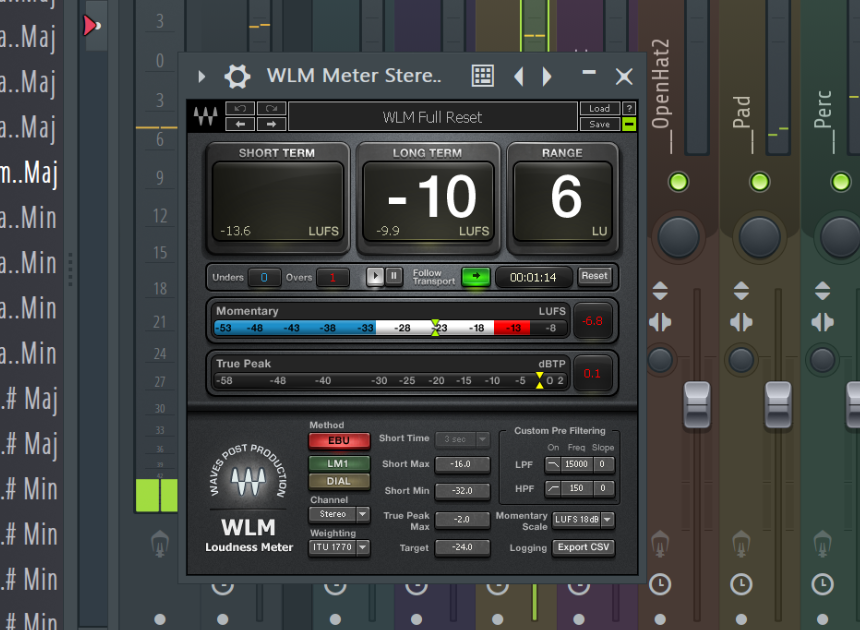 How Loud Should Your Mixes Be?

Your mixes should have a good dynamic range and headroom so the mastering engineer has sufficient space to work on the mix. The loudness of at most -18 dB LUFS is recommended, with the peak at -6 dB TP or below. That means that your mixes will have a headroom of 6 Decibels.

However, even if you export the mix at -1 dB TP, the mastering engineer can turn down the volume slider or gain of the mix to create that headroom. But the dynamic range in the mix cannot be recreated, so it’s important that you keep your mixes dynamic and not over-compress them.

Moreover, the answer also depends on the genre of the song. For example, acoustic and classical songs with high dynamic range can even have a difference of 20 dB between the peak and the RMS/LUFS loudness. On the other hand, the same difference in a typical EDM/hip-hop/pop song is between 10 and 18 dB.

However, these are just rules of thumb and not rules, so you don’t necessarily have to stick to them. Every mixing and mastering engineer has their own workflow, theories, and trade secrets, from years of experience and techniques they have developed. What matters most is that the song sounds as the artist envisions it.