Today we’re going to look into one of the most unexpected comebacks the music industry has ever experienced: the cassette tape’s resurgence.

Often, the people who are buying cassette tapes nowadays are not the same people recording their favorite songs on tape from their stereo car in the ’80s. Most of them were born in a world where music was already digital and easily (or freely) accessible. That’s why with this article, we’re going to focus on how this iconic audio medium works and what to do to best enjoy it.

So How Audio Cassette Tapes Work?

The plastic outer layer protects the flat plastic tape inside. The tape is covered in ferric oxide, a metal substance that can be magnetized and will stay so permanently. Audio recordings are magnetically stored information generated from electrical impulses and stored on magnetic tape via tape machines.

A similar process occurs when we listen to music on tape: a cassette player converts the electromagnetic signals from the cassette into audible sound. On any tape player, you’ll find the capstan and the pinch roller: the former revolves at an exact rate to pull the tape across the head, while the latter applies pressure to ensure the tape is tight against the capstan.

Cassettes experienced a steady decline in sales since the early ’90s, once the CDs started replacing them altogether as the worldwide favorite’s medium for listening to music. However, the digital era revived the love for everything physical, including the long-forgotten cassette tapes, which have become a symbol of music’s good old days for the last ten-odd years for nostalgic fans and new generations alike. In the following sections, we’ll describe what makes this audio format still one of a kind. Let’s go!

What Are the Pros and Cons of Cassette Tapes?

Tapes are inexpensive to manufacture and buy and can be carried around more efficiently than any physical audio format. Furthermore, cassettes have become a collection item among younger generations and cost a fraction of vinyl. The biggest downside is that you need an expensive tape player to achieve “good” results.

You may be able to achieve sound quality comparable to vinyl and CDs, but this will require expensive audio equipment and close to manic care for your cassettes that don’t particularly like humidity, magnetic fields and heat. Cassette tapes also unravel; we all know that: some people like it, while for others, it’s just a nuisance. 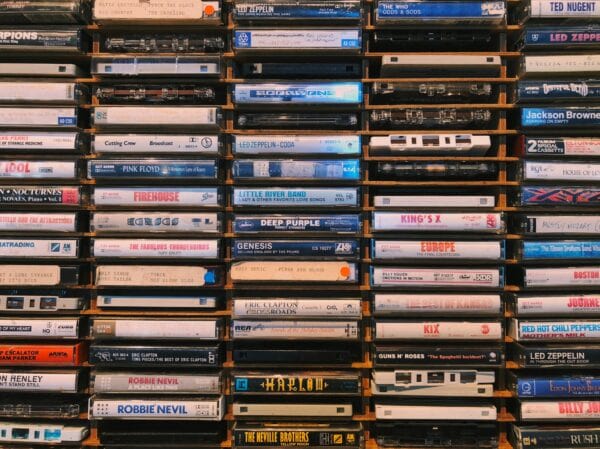 Comparing analog recordings, the audio output of a new cassette tape is similar to the one of an LP. The quality of the tape deck, the cassette itself and how much you’ve listened to it will affect the bandwidth and add additional noise and distortion to the music. This will result in a nice analog feel, adjustable with suitable tape formulations and noise reduction.

The digital vs analog debate has been a long and heated conversation for a couple of decades. However, most audiophiles agree that cassette tapes generally do not sound better than CDs or vinyl. People love tapes because they’re cheaper, more durable, portable and very cool.

How Many Songs Does a Cassette Tape Have?

Considering CDs are quoted as being 74 minutes long, most cassette tapes can hold more music than standard CDs. Bear in mind that cassettes have side A and side B, which means you may end up splitting a song in half or having a long silent break in between the two sides. You’ll have to do the math before you start recording your mixtape!

Can I Record Over a Cassette Tape?

To record over a cassette tape, choose a blank tape (or one you want to record over) and put it in your tape deck, push record and play simultaneously whichever CD, LP or cassette you want to have on tape from the same deck. Let it play until the end, then press stop and eject your new cassette tape.

There’s a punch-out tab on the shell of prerecorded cassettes that prevents accidental recording: which means you shouldn’t be able to record anything over them. However, you can get around that by putting a small piece of paper to cover the tab, and you’ll be able to rewrite the tape following the instructions above.

Cassette tapes were never made for a high-fidelity audio experience. Compared to vinyl and CDs, tapes lack the sound clarity audiophiles look for: a high-quality cassette deck can compensate for the format’s limitations by cutting down noise and distortion but will never reach the quality of digital audio, reel to reel or LP.

Ultimately, if you’re looking for the best audio quality, there are much easier ways to achieve it rather than the tapes’ path. These convenient little cassettes are the ideal choice for artists and fans worldwide for other reasons: they’re easy to copy, reproduce, store and are cheaper than all their physical competitors. For more information on the subject, check out our article on Analog Vs. Digital Audio.

Cassettes - better than you don't remember

Where Can I Listen to a Cassette Tape?

There are two ways to listen to cassette tapes: portable Walkman and audio cassette decks. The former can be carried around, but the sound quality may not be optimal, while the latter is part of the home audio system that can offer “almost as good as CD” high-fidelity audio quality.

Today you can easily get a second-hand Walkman for as low as $10, making cassette tapes the most economical way to experience music these days. However, cheap players are likely to damage your tapes over time or unravel them more often. 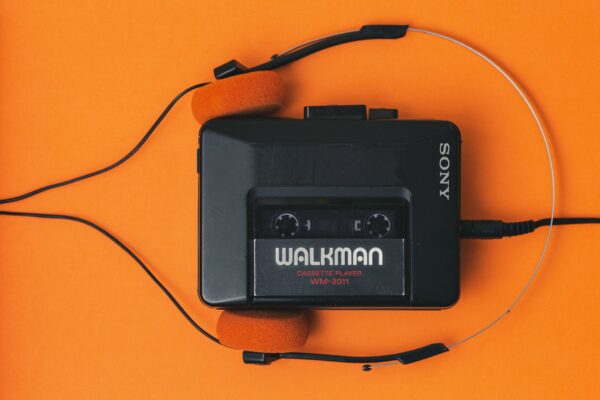 What Are the Types of Cassette Tapes?

The most used types of tapes are ferric (type 1), chrome (type 2), ferrichrome (type 3) and metal (type 4). Metal tapes are the most recent tapes’ type and provide the listeners with the best sound quality thanks to low tape hiss and overall balanced frequencies.

With a frequency between 30Hz and 16,000Hz, metal tapes are as close as you can get to digital recordings with cassettes. Their quality also implies a higher price compared to the other types. Still, the low noise recording, balanced treble and bass response make it the ideal choice for audiophiles who want to experience music on tape.

How Do You Rewind a Cassette Tape?

To get your tape back into shape:

Though old audio cassette tapes can run into several problems, the unravelled tape is undoubtedly the most common. Likely it’s also an easy one to fix and won’t require any expensive or time-consuming operation. 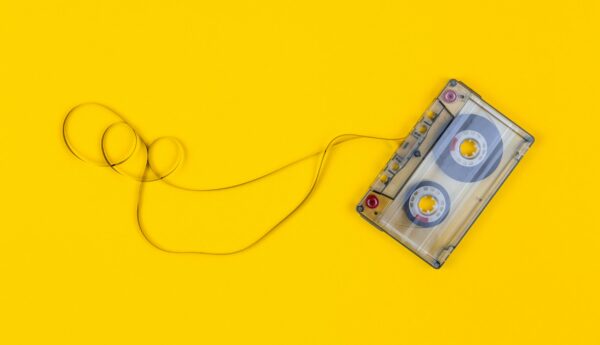 Can Cassette Tapes Be Converted to Digital?

The easiest way to digitalize cassette tapes is through a cassette player with USB output. These players usually come with software that does the job automatically. Alternatively, you can download Audacity, which is free, and do it yourself in no time.

Another option is to use a cassette tape deck. The process is similar: download Audacity and connect your tape deck to the PC as if you were connecting it to the speakers (you’ll need the correct headphone jack for both ports).

Once you installed and opened Audacity, on the top menu, find the microphone icon and select the proper input for your cassette tape (usually the Line In 1-2). Once set, press play. 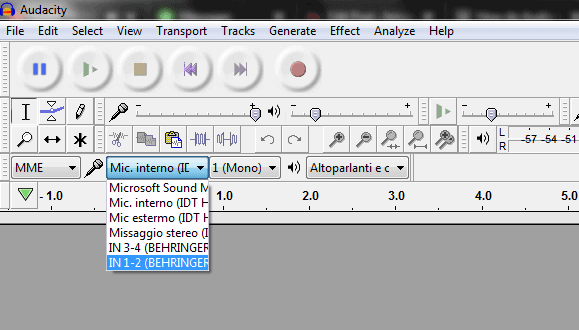 If the volume meter flashes red or orange every now and then, your recording is too loud, and you’ll have to lower the volume and start again.

How to Safely Store Your Cassette Tape Collection?

Keeping your audio cassettes in a dust-free environment is the most critical rule to preserve your collection. Make sure tapes are stored away from direct sunlight and in an environment without drastic temperature shifts. Humidity and magnetic, electronic equipment can also damage tapes permanently.

With proper care, cassette tapes have a life expectancy of up to 30 years. If you’re interested more in the audio content than the format itself, consider digitizing your collection: by doing so, you’ll ensure there’ll always be a copy of your albums available, should anything happen to the original tape. 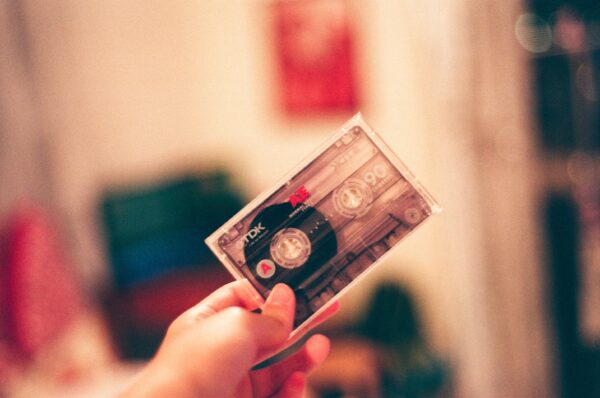 How Can I Make My Cassette Sound Better?

To get the best audio results, you’ll need to invest in a good, non-portable second-hand cassette deck. Treat your tapes gently, and always wash your hands before opening the case. Remove dust from both tapes and cassette deck regularly and keep the former away from magnets and electrical appliances.

Cassette decks require regular maintenance and constant care, especially when expensive. Clean the play heads of your cassette deck with a cotton swab and isopropyl alcohol regularly. To clean the pinch rollers, you can use a dry cotton swab.

Sales of cassette tapes have been doubling every year since 2018 and are expected to double up again in 2022. In the UK, sales’ figures are similar to the early ’00s when they reached 100,000; in the US, they’re well over 200,000 and climbing. This is thanks to the efforts of both big pop artists and underground indie labels.

Vinyl was the first physical format to come back with a bang, reaching peaks in albums sales not seen since the early ’90s. With cassettes, the love for a format that wears out more quickly than any others was initially fueled by small artists and record labels looking for the cheapest physical form to release their music. More prominent names in the industry followed shortly after.

Combine the romantic, nostalgic feeling of music fans with the creative output of indie and prominent artists unable to play concerts during these unpredictable times, and the result is obvious. One hundred fifty-seven thousand tapes sold in the UK alone in 2020, a figure that doubles the album sales from 2019 and will likely increase again this year.

Audio cassettes are currently the fastest growing music media worldwide. It’s the best media for music producers who want to get their music out there in a physical format as it’s incredibly cheap to produce and has a faster turnaround than vinyl.

A tape collection gives a nostalgic and ethereal feel that no other audio format can offer. What makes younger generations interested in cassette tapes is their need to experience a different way of listening to music. The digital era provides infinite ways to experience music but deprives audiophiles of the cultural enjoyment of a “real” music collection.

Audio cassette tapes are indeed experiencing a comeback, but the way we perceive this format has changed: from the cheapest and simplest way to listen to music on the go, they’re now the epitome of cultural interest in the passage of time and the value of ephemeral pleasures, freed from the boundless abundancy the digital world offers.