Today we’ll compare three of the best laptop chips and tell you which is the best CPU for music production in 2021. Later in the article, we’ll take a look at each manufacturer in isolation and explore their desktop chips as well.

Understanding CPU chips is not an easy task. Every year, Intel and AMD release a truckload of updated versions with confusing names and very little difference from the other chips in the line. Also recently, Apple got into the game and decided to build their System on a Chip, leaving Intel behind as the bitter Ex. In any case, we’re fierce and determined here at Integraudio. So, we dove deep into the CPU sea to bring you the most up-to-date and valuable information. All this to help you decide which is the best choice for your music production needs. If you’re looking for an extensive list of the best CPUs, please refer to this post.

The three chips we’ll compare in the following table are all in the same category. We chose to match them in specs as close as possible to generate fair results. We obtained these numbers from several sources, but the primary comparison reference was GadgetVersus.com. The manufacturers have targeted these chips at high-end laptops, and they were all released recently:

Which is the Best CPU for Music Production?

The best CPU for music production using an x86 design is the AMD Ryzen 9 5980HS. Its single-core performance outranks any Intel chip, which makes it the ideal choice for Windows and Ubuntu users. If you’re a Mac user, however, the best CPU is the Apple Silicon, which uses ARM design and outperforms all other chips on the market.

Down here is a comparison chart borrowed from the good people at NotebookCheck.net: 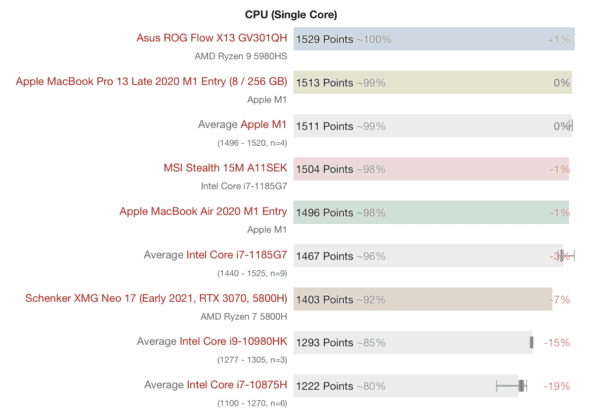 Here you can see that the AMD Ryzen 9 outperforms the Intel Core i9 chip by 15%. That is a long dispute, considering both chips use the same x86 architecture. Even though the Intel Core i7 performs better, it has fewer cores, so it didn’t fit our comparison table. The Apple M1 loses by 1% to the AMD chip, even though it uses an entirely different architecture.

Now let’s take a quick look at some technical background:

The x86 architecture demands thorough instructions that take several clock cycles to be executed. It is also more hardware-dependent, as it relies as much as possible on the circuitry. On the other hand, ARM takes a single clock cycle to execute uncomplicated instructions. It’s also more software-dependent, which further improves the operations’ speed.

In mid-2020, Apple took over the tech news by announcing they would be transitioning their entire computer line to ARM-based CPUs. That immediately raised questions on the music production community as to what advantages this change could bring. At the end of this article, we’ll take a look at the new Macs and how they perform.

Apple is the first computer manufacturer to ditch the x86 architecture, but it won’t be the only one. Microsoft and AMD are already working on M1 copies of their own, and the future looks bright for the ARM design.

So, when it comes to picking a CPU for music production, power comes over quantity. In other words, if you choose a CPU with several cores but low single-core performance, you’ll waste your money. That’s not to say you shouldn’t go for more cores. The more you can get, the better. But the key is finding a CPU with more than four cores and the best single-core performance within your budget. That paired up with at least 8GB of RAM will make a fabulous music production computer.

What is Single-Core Performance? Why Should I Care?

Single-core performance shows how well a CPU would work if it only had one core. Besides, it makes it easier for users to rival distinct models, despite the chip’s core count. This measurement is valuable for music producers since the higher their CPU’s single-core performance, the heavier the plugins they can add to a project.

OK, so now we’re all set to explore each CPU manufacturer with some more detail. But before we go on, a word about cooling your system:

Why is cooling your CPU necessary?

Producing music strains the CPU’s cores, causing excessive heat. If your machine overheats, not only can you lose your data, the damage can be irreparable. Therefore, cooling your CPU is vital to maintain the health of all your computer’s parts. So, if you’re looking for a music production computer, make sure it ventilates well.

The higher the clock speed of the processor, the hotter the computer will run. So, if you’re building your music production PC, invest in a case with enough fans. But more importantly, make sure your cooling system is up to par like this fella did. If you’re going for a laptop, make sure it has enough vent ports to keep the system cool. Additionally, avoid using your computer on your bare lap while producing music, as the cloth from clothes or blankets can block some vent ports, causing overheat.

What is The Best AMD CPU For Music Production?

AMD CPUs have a haunted past when it comes to music production. And even though the reports of failing VSTs are accurate, they’ve come a long way into improving their tech. With that said, the best AMD desktop processor you can get for music production is the AMD Ryzen 9 5950X (Check Amazon). It’s a 16-core beast released at the end of 2020.

We chose this CPU by creating a balance of price and performance. There’s a table below with a few different options for those looking for higher or lower-end processors.

Should You Upgrade to AMD Ryzen for Music Production in 2021? #intelvsamd #cubase #windows10

And here are the best AMD processors for music production in different categories:

What Is The Best Intel CPU For Music Production?

The best Intel desktop CPU for music production is the Core i9-10900K. It has ten cores and was released in mid-2020. Even with Intel underperforming compared to AMD, most new audio interfaces, plugins, and DAW upgrades are still tested on Intel CPUs. That ensures optimal compatibility, even it not being as strong.

Again, we chose this CPU by striking a balance between price and performance, but also because it’s a very popular CPU among producers. The table below shows a few options for those looking for a different investment.

Here’s a table with the best Intel processors for music production in different categories:

What Is Apple Silicon? Should I Get It For Music Production?

Apple Silicon is the new SoC developed by Apple and used in its most recent computers. It’s called M1, and it’s an eight-core CPU with GPU, RAM, and a 16-core Neural Engine, all built into the same chip. It is one of the fastest CPUs out there in single-core performance, so it is incredible for music production.

Another great feature of the M1 chip is its heat management. The computer’s fans practically don’t move, even at demanding tasks. That’s not because the cooling system is any better than in previous generations, but because the M1 chip is highly thermally efficient. All music producers know how vital a silent computer is, especially when you need to record stuff in the same room that your workstation is on. But Apple’s advantage doesn’t come from single-core performance or heat management.

For decades now, Apple has focused on an integrated approach to computing, which means developing hardware and software to create a better user experience. That makes for a more potent computer, as the chip is optimized for the software and vice-versa. The M1 chip is another excellent example of this since it holds the CPU, GPU, RAM, and more components on the same 5nm chip. This integration based on ARM technology makes the entire computer faster and more power-efficient. That’s why sometimes the new Macs outperform other computers even if their specs don’t look as great on paper.

As you’ll see in the video below, the M1 chip with only 8GB of RAM runs a Logic Pro project with over a thousand plugins without breaking a sweat:

Which Is The Best Mac For Music Production?

The best Mac for music production is the M1 Mac mini, released in late 2020. It’s a small CPU, which means you will also need to use an external keyboard, mouse or trackpad, and screen. It is the cheapest Mac out there. Alternatively, the M1 MacBook Pro has the second-best single-core performance among Macs if you need a laptop. 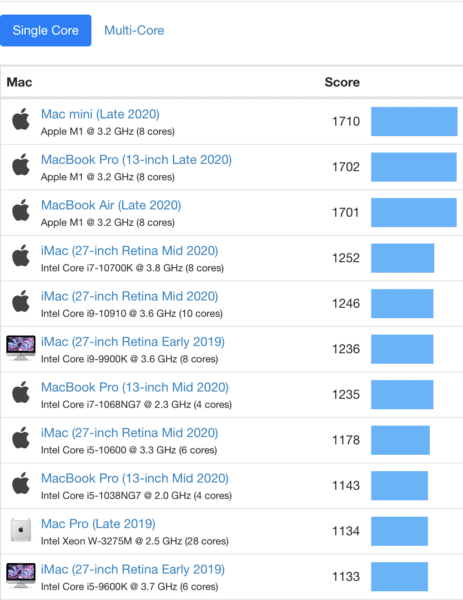 As you can see from the Geekbench scores above, the M1 models beat all Intel Macs in single-core performance by several points. So, if you’re looking for a Mac and you want to stay up to date with the technology, they’re a logical choice. In any case, Apple still sells the Intel models on its website since it will take another year and a half for the fruit company to update the entire Mac lineup to the Apple Silicon architecture. However, if you’re looking for a big CPU like the Mac Pro, Intel is your only choice for now. The Mac Pro is a highly customizable Mac, but unfortunately, its price tag lives somewhere between the impossible and the unnecessary for most producers.

Finding the right CPU for your needs is an art on its own. Additionally, not everybody can allow themselves the luxury of dedicating a computer solely to music production. With that in mind, you must weigh in all your demands before picking the best option.

Regardless, whether you’re looking for a powerful laptop, a CPU for your desktop build, or your next Mac, we got you covered!

If you’re going the PC way, there are several options. However, the AMD processors are beating the living crap out of Intel, so clearly, the best laptop and desktop CPUs for music production are from the Ryzen manufacturer. Additionally, they’re mostly cheaper, and even older models not listed here also perform great.

If you’re a Mac user, the choice is simplified. The Intel Macs are outdated unless you’re looking for a Mac Pro. The best way to go is to choose one of the new M1 models or, if you can, wait a few months for the next generation. The Apple Silicon models are also cheaper than their Intel counterparts, so it’s surely a no-brainer.

Tip if you cannot afford a new CPU:

When producing music, Avoid using CPU-heavy plugins, or when doing so, consider to resample it into waveform and get the CPU back.

We hope you’ve found what you were looking for! Don’t forget to check our article focused on PC specs for music production.