The frequencies that emerge as a result of ring modulation are ensured to never be harmonically related. This makes ring modulation useful in sound design as it can be used to emulate sounds of percussions that have inharmonic frequencies like bells, chimes, etc.

What Is Ring Modulation?

Ring modulation is a type of amplitude modulation in which the modulation and carrier signals’ input levels are aligned to result in the emergence of new sum and difference frequencies. In contrast, the original carrier and modulation frequencies disappear totally.

Despite sounding simple, ring modulation can be very challenging to control. On the bright side, it can produce sounds doubtful to be achieved by any other synthesis method.

What Does Ring Modulator Do?

In short, a ring modulator multiplies 2 signals together, resulting in the creation of two frequencies: the sum and difference of the input frequencies.

How Does A Ring Modulator Work?

A ring modulator is a VCA with a special input. In VCA, when there is no CV, the output should be completely silent. Hence, carrier signals are blocked from passing when the modulation signal is zero, or less and negative signals are ignored altogether.

A ring modulator does the same, but instead of ignoring negative signals, it lets them pass but inverts them, making everything negative.

Listed below are 6 of the best Ring Modulator plugins used by popular sound designers and music producers. 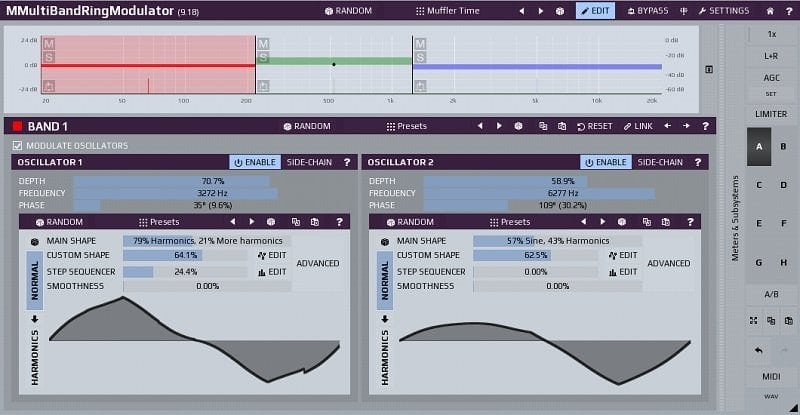 This plugin by MeldaProductions is one of the most advanced takes on ring modulation and offers users a ton of control options.

One of the most desirable things about this plugin is its 6 band control option with 2 oscillators. You may think to yourself, “one oscillator is confusing enough; why need 2?”. However, Melda’s implementation of those 2 oscillators over 6 bands makes its usage easier and more pleasing. In addition to that, Melda provides you with parameters that can be modulated independently. Each modulator can function as an LFO, envelope, audio level follower, randomizer, and even a pitch detector.

Since this is a MeldaProductions product, you get the usual M/S 8 channel surround sound, up to 16x up-sampling, A-H presets to aid your workflow, a built-in help system, and many more.

This plugin is compatible with Windows 7 or higher for PC and macOS 10.9 or higher for Mac. It comes in VST/VST3/AU/AAX versions and supports 32 or 64-bits for PC but 64-bits only for Mac.

Overall, this ring modulation plugin is a unique addition to the several high-quality plugins by MeldaProductions. Its advanced GUI and dual interface modes help users have a more organized and more efficient workflow. Moreover, the in-depth control that you get over the effect is totally unmatched. 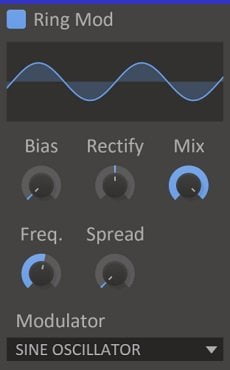 This simplistic plugin by KiloHearts emulates analog ring modulation to provide you with a classic sounding tool.

Secondary signals inherited by this plugin include input signal and its sidechain, a sine wave oscillator, and a low and bandpass filtered noise. All those parameters can be shaped using the Bias and Rectify controls.  Then you have the Frequency control knob, which is responsible for setting the filter or the oscillator’s cutoff frequency. Next to it, the Spread control knob manages the stereo width of the effect. Finally, the Mix knob controls the Wet/Dry levels, which enable parallel processing.

KiloHearts Ring Mod is compatible with Windows 7 or higher for PC and OS X 10.10 or higher for Mac. It comes in VST/VST3/AU/AAX formats and supports 64-bit systems only.

KiloHearts provides you with everything you need to generate ring modulation. Its simple design and straightforward control knobs enable faster workflows and higher efficiency. However, its simplicity is also its downside since it is compromised in terms of versatility and controllability, limiting the range of sounds that can be generated.

Stagecraft RingMod is a lightweight, easy to use ring modulation plugin that offers a surprisingly decent amount of control to the users.

This plugin has a very organized interface. The main point of focus is the XY pad present in the center of the interface that allows you to control the modulation. To the right, you have the controls for the flanger, chorus, and the LFO filters. You can choose to enable or disable any effect that you need. In addition to that, there is the Warp tool, which helps time sync the oscillators to match your host tempo or to different timing like a quarter note, triplet, etc.

Unlike most plugins, RingMod allows you to generate the ringing effect by choosing 5 different waveforms instead of the traditional sine wave only. Additionally, RingMod offers pulse width modulation, which expands the range of possibilities for this effect.

This plugin requires Windows 7 or higher for PC and OS X 10.7 or higher for Mac. It comes in VST/VST3/AU/AAX formats and supports 64-bit systems only.

In conclusion, if you are looking for a simple ring modulation plugin with all the basic control parameters, you won’t be disappointed by Stagecraft’s plugin as it offers all of that and more. It also has features that separate it from the rest of the market, like enabling ring modulation using 5 different waveforms instead of 1.

Wobbulator is a unique plugin when it comes to its LFOs as it features independent left and right LFOs with 96 waveforms (including 8 random shapes, 32 ‘sequencer’ patterns, and an envelope follower). Moreover, the LFO can be tempo-synced to different timings like a quarter note, random triplet, or just according to the project tempo.

When it comes to the user interface, Wobbulator has large controls that are very easy to adjust. Additionally, the parameters have wide ranges and can be adjusted smoothly and randomized using the smart randomization feature, which generates random settings for the parameters. Furthermore, parameters have independent displays that are colored differently, making them easy to read.

This plugin requires Windows 7 or higher for PC and OS X 10.7 or higher for Mac. It comes in VST/VST3/AU/AAX formats and supports both 32 and 64-bit systems.

Wobbulator by SPC plugins is one of the best ring modulation plugins in the market and is well recognized by many sound designers. Its highly advanced LFO with 92 waveforms alongside its easy-to-use interface is what makes this plugin stand out among the rest. 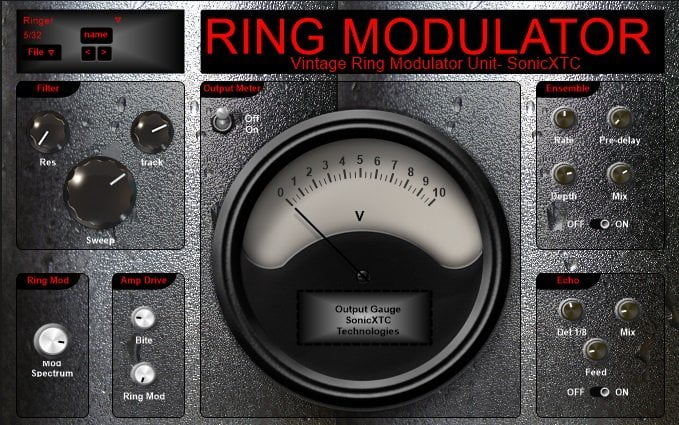 This freeware by SonicXTC is an impressive ring modulator that packs an exciting amount of features.

The Modulator 101 attempts to emulate a classic effects chain featuring a vintage ring modulator present in vintage hardware modulator units. The developers of this plugin claim that it offers the closest emulation of the classic vintage sound.

Apart from the ring modulator, this plugin also has chorus and flanger modules, a built-in preamp simulator, and a spring reverb effect. In addition to that, this plugin offers a 2-pole low pass filter that can be used to control the generated harmonics. While the interface looks a bit messy, everything is divided into sections where you have the LP filter in the “Filter” section, “Ensemble” section for the chorus and flanger effects, “Echo” section for spring reverb, “Amp Drive” section for the preamp, and “Ring Mod” section for controlling the ring modulation. Furthermore, there is a giant VU meter on the center of the interface that can be enabled to view the output levels.

Ring Modulator 101 works on Windows 7 or higher only. Unfortunately, it doesn’t support Mac devices at the moment. It comes in VST format and supports both 32 and 64-bit systems.

While the interface of this plugin needs a massive redesign, there is no doubt that the Ring Modulator 101 by SonicXTC is a plugin that posses great quality when it comes to sound and good potential. Moreover, it is a free plugin that makes it so much more reasonable for many users. 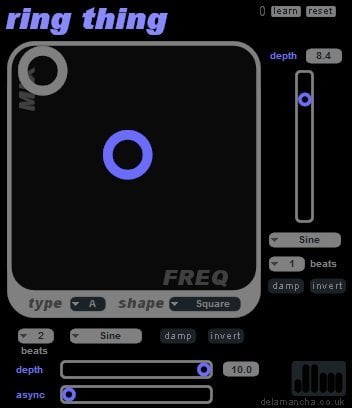 Ring Thing is another impressive Ring Modulator plugin that is developed by de la mancha. It packs impressive features on a simple interface.

The interface in this plugin revolves around a big XY pad the is placed in the center. This XY pad controls the frequency and mix level of the ring modulator. Each axis on the XY pad is modulated independently using a tempo-sync LFO, and the modulation is displayed graphically on the XY pad. Below the XY pad, you have controls for the ring modulation waveform where you can choose between several waveforms.

Just like the Ring Modulator 101, Ring Thing is a Windows plugin that requires Windows 7 or higher. It comes in VST format and supports 32 and 64-bit systems.

Overall, Ring Thing is a pretty awesome ring modulator, given the fact that it is a free plugin. Its inclusion of an XY pad to control the modulation effect makes it so much more controllable when compared to the counterparts that do not possess it. However, it is a pretty outdated plugin that needs some refurbishment and better support for more devices.