Picking the right Midi controller can be tricky with all the available options and features out there. Different brands have different approaches to providing the best Midi controller to today’s pianist/keyboard player. This article looks at the 3 Best MIDI Controllers with Full Weighted Keys.

With technological advancements at such a breakneck pace, all major brands have had to continuously reinvent themselves to stay relevant in the market. The 88 Key versions of the Midi Controller are especially important in this regard as they are seen as the flagship offerings of these brands.

You will find that different Midi Controllers offer a different variety of key beds. For example, some have fully weighted keys, while others may have graded weighted keys. In addition, you may find that some key beds have velocity-sensitive keys, while some have keys with an after-touch feature or a combination of both.

Similarly, on some Midi players, you may find just a hand full of controls which increase their dependability on the apps and software bundles that come along with them. At the same time, other instruments may be loaded with onboard controls and multiple displays to help you navigate the menus and features.

It all comes down to the feel, the features, and sample sounds the user is looking for, so let’s help you decide by looking at the 3 Best Midi Controllers with Full-Weighted Keys. Read through the article to get a bonus right at the end.

The Komplete Kontrol S88 MK2 is the flagship of Native Instrument Keyboards.

Native Instruments have gone to great lengths to combine all the best features from the S88 MK2’s predecessors and more to pack the MK with some impressive characteristics. The keys are engineered in a way to give you the feel of an actual acoustic piano.

The controls layout is nice and detailed, yet simple to use. Introducing some intuitive colored screens makes the user’s experience more efficient and enjoyable.

Native Instruments also give you the added controls to access and use your DAW directly from the S88’s control panel.

The Native Instruments and third-party plugins sound great. You can have a lot of fun with the browser feature and the array of effects at your disposal to get you the right sound for the occasion. The free software you get with the S88 has everything you need to start recording or play live.

Controlling your DAW through the controls on the unit can be impractical and annoying. You may still prefer the convenience of a mouse to control your DAW. In addition, the fully weighted keys may not suit everyone.

Also, there is a certain amount of noise that you sometimes get by pressing the keys.

Roland owes its popularity to the innovative and groundbreaking instruments it manufactures.

The Roland A-88 MK2 takes innovation to the next step by becoming the first midi controller that introduces Midi 2.0. The Midi 2.0 is smarter and adaptable. This gives the Roland A-88 MK2 some exciting features in terms of connectivity with other instruments and music devices.

Roland has tried to keep the control layout simple and undaunting by arranging all controls to one side for quick and easy access. When combined with the onboard controls, a helpful control app makes saving and recalling scenes easy and efficient.

The controls are managed well and are easy to grasp. The control app adds enhanced customization to the controls as per user preference. Being Midi 2.0 ready, the controls adjust and align to an instrument when plugged into the A-88. The device is a full duplex and can be powered by your computer through the type C USB connector.

At this price point, most users would expect a display screen that is missing. Some of the button combinations make it difficult to apply features while playing.

The pads could be moved below the knobs to avoid inadvertently changing knob parameters. The keys are not after touch-enabled. 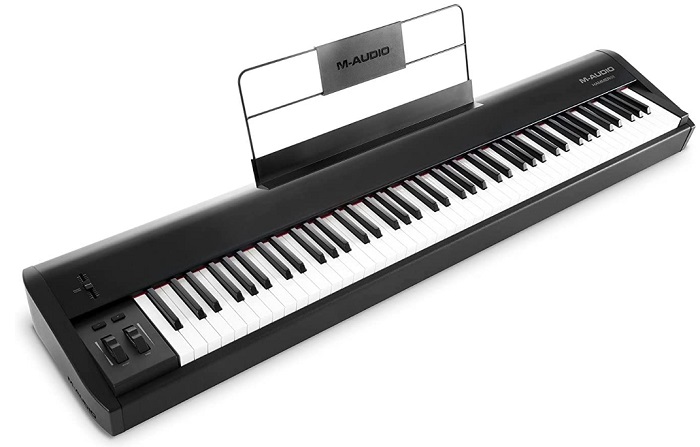 The M-Audio Hammer 88 is the most economical midi controller on this list.

The Hammer 88’s user interface has a minimal design which may or may not be your cup of tea. The layout has been kept super simple, and you hardly see any controls on the main interface, unlike some of the other 88 key options on the list that have separate control panels with assisting displays.

Since the Hammer 88 is a midi controller, you can derive most of the sounds/samples you need through the comprehensive software bundle that accompanies the controller. You also get a few other goodies under the hood that are rare to find on a unit of this price range.

The simple control layout and the lower price tag make the M-Audio Hammer 80 a great choice for beginner-level players. The three-month piano lessons by Skoove will polish up your skills in no time. In addition, the free software bundle has everything you need for your sampling/recording and mixing needs, saving you lots of money.

The layout may be too simple for players who are used to having more control options on the keyboard control panel. For the same reason, the unit is less suitable for live situations as there are not enough controls within an arm’s reach for quick changes.

In addition, the keys don’t have an after-touch feature.

It looks very similar in design to its predecessor, the SL73. Apart from the obvious size difference, the SL88 and SL73 look identical. However, Studio Logic takes things to the next level with its most advanced Fatar key bed yet, giving the SL88 a premium feel.

With the SL Editor software, you get an easy-to-follow interface with loads of customization options to manage and adjust your sounds.

In addition, the TFT display and central controls complement each other well, giving a pleasant user experience.

The ivory-touch wooden keys seem to represent the real thing very closely. The velocity sensitivity and other aspects of the keys are fully customizable, which gives the user freedom to set everything as per preference and comfort.

In addition, the SL Editor is a useful software to organize and back up your sounds.

The keys seem to rub against each other and tend to be noisy when playing. In addition, the X/Y sticks are a bit fragile, and most players may prefer the more conventional wheel controls that are easier to access and get the most out of during performance.

If you are looking to delve into the world of 88 keys, we have covered some good options for you to consider. You now know the features, pros, and cons of some of the leading instruments in the 88 keys midi controller.

So, you’ve decided to buy your first 88-key midi controller and want a budget option that keeps the layout simple but gives you the basic features. Well, the M-Audio Hammer 88 could be a good choice. You get a software bundle with Ableton Live and several professional-sounding plugins with samples to get you started right out of the box.

However, the more advanced player would prefer the touch and feel of some weighted hammer keys and a control panel that gives a certain amount of freedom to work on the unit rather than springing to your computer every time a little change is required.

In that case, the Native Instruments Komplete Kontrol S88 MK2 seems to be a suitable option with its dual displays and friendly knob controls that let you dial in your sounds and get creative with an arpeggiator, octave change feature, and many more.

Looking for a keyboard with graded keys that vary in feel and pressure as you move along the key bed, just like a grand piano? The Roland A-88 MK2 and Studiologic SL88 Grand offer exactly those qualities. With the Roland A-88, you get Midi 2.0 connectivity, which means that it will map its controls automatically according to any musical device or instrument plugged into it.

The SL88 from Studio Logic is not a bad choice either, as it lets you fully customize every aspect of your keys like velocity, pressure sensitivity, layering, and splits zones through its easy-to-use SL Editor software.

Be sure to check out all these fascinating 88 key midi controllers at the local stores so you can get a hands-on experience regarding the feel and features of each one of them to make your decision easier.