In this post, we will be discussing what buffer size to use for each situation, what buffer is in audio, and if it affects the sound quality. Plus, we’ll give you a few helpful tips to avoid latency.

So, what buffer size should you use?

To eliminate latency, lower your buffer size to 64 or 128. This will give your CPU little time to process the input and output signals, giving you no delay. Likewise, when it’s time for mixing, nothing’s better than a larger buffer, such as 1024, which will give your CPU the time it needs to process.

A few tips to avoid latency

If even after lowering your buffer you can still notice latency, here are some troubleshooting techniques:

What does buffer mean in audio?

Buffer in audio is the rate of speed at which the CPU manages the input information coming in as an analog sound, being processed into digital information by your interface, running through your computer, being converted back into analog, and coming out on the selected output.

The bigger the amount of information coming into your DAW, the harder your CPU has to work to process it and put it out in real-time so you can hear it without delays. If there’s no information coming in from the interface, there’s no need for the computer to work as fast since it’s not as straining on the CPU to playback what’s already been recorded.

Increasing your buffer volume helps because it ensures data is accessible for processing when the CPU needs it. However, using a low buffer volume or not increasing it will mean information will not be accessible to the CPU when it calls for it, distorting the data stream.

Distortions in the data stream would start giving off undesirable pop-ups and clicking noises due to too much workload on the system. You can try applying a low buffer volume while playing a track on your DAW to verify this. You should be able to hear the audio obstruction induced by the immense workload on the CPU.

The best way to prevent your CPU from being overwhelmed by too much workload is to increase the buffer value. Increase it little by little until you can hear all the unpleasant sounds fade away. Doing this should give you a more balanced recording setting with decreased system latency and zero audio obstructions.

What Are The Best Audio Format File Types? WAV vs MP3 vs AAC vs AIFF

What should I set my buffer size to?

When mixing, your focus must be on running the audio plugins that you want in your mix. So, adjust the buffer size to 512 or 1024. Similarly, when recording, the central processor should run data faster. So, when you start noticing latency: lower your buffer size.

When organizing and mixing pre-recorded songs, you need to utilize the processing capacity of your computer fully. Since mixing tracks requires the use of various types of plugins, which take an extra toll on your computer, you need to regulate your buffer volume to a higher one.

There is no such thing as a right or wrong way to adjust your buffer volume, especially since it really depends on your computer’s specs and what works for you.

Buffer volume does not harm the sound quality and is only known to affect the CPU speed and cause latency. As previously stated, reducing your buffer volume could put a lot of pressure on the computer processor. Due to this pressure, there will be clicks and pops coming out of your speakers.

If you’re worried about quality, sample rate, and bit depth, those should be your primary concerns since they are responsible for translating the mechanical, organic sounds you can capture with your microphones into digital information. This is where the quality loss happens. 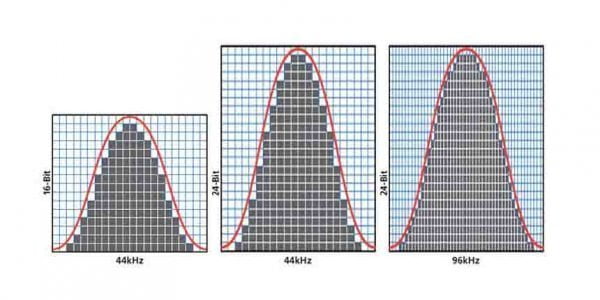 A quick representation of the same waveform being sampled at different settings. A bigger sample rate and bit-depth mean more quality. Source

Remember that even if your computer and DAW support a 192kHz sample rate and 32-bit float bit-depth, which is currently the highest quality you can get from most DAWs, you should ensure that your interface can record up to those settings.

Some websites agree that an increased buffer quantity may be necessary to record an audio signal precisely without distortions and restricted latency. At this point, the balance between dormancy and the workload placed on the CPU is essential. You might have to prepare for another recording whenever there is distortion in a recording, as it will be difficult to remove it.

But this line of thinking opens up another discussion: do computers behave as magnetic tapes, in which there was a difference in sound quality among different brands? In this case, do more powerful computers with larger RAMs, and faster CPUs make for higher quality recordings? It’s impossible to say for sure.

Nevertheless, while a few notable websites support the notion that a reduced buffer size harms the sound quality, most people think the opposite in an increased buffer volume. They believe that it will not harm the sound quality so long as it is large enough to avoid pop-ups and uncomfortable noises.

What really happens, and it’s actually pretty easy to notice, is that not allowing the computer enough processing speed during recording can cause clicks and pops during real-time playback that sometimes translate to the recording itself.

So, trying to record sixteen simultaneous drum tracks, all with compression, EQ, reverb, and auxiliary sends at a buffer size of 32 and expect your computer to fly easily through the task, is a good recipe for a recording full of clicks and distortion.

However, it won’t really affect what is described as quality in audio, which is clearly defined by the bit depth, which controls dynamic range, and the sample rate, which controls how detailed an analog sound is converted into digital.

Furthermore, check your interface and DAW’s sample rate and bit depth if you are worried about the quality.

Sometimes even at the highest buffer value, there’s not much you can do to help. If your session has over a hundred tracks, you should expect some straining from your CPU anyway. But with all of this in mind, you can’t go wrong.