Apart from being a trendy audio editor, Audacity is a very capable workstation aimed at those looking for open-source, free audio software.

Its cross-platform nature makes it a genuinely accessible tool, compatible with LADSPA, Nyquist, VST, and Audio Unit plugins. The software is available for Windows, macOS, Linux, and most UNIX-based operating systems.

But how do you make music in Audacity?

Like any DAW, Audacity gives you a set of tools and limitations that can help you express your creativity. You can either use the software to record, edit and process every instrument of your song or use it to edit and process pre-recorded audio and playback MIDI tracks.

Audacity currently does not support VSTi, So if you’re planning on using your MIDI controller to make that dope beat and those incredible synth sounds, it isn’t going to happen. You can, though, make it all within the software and still achieve great results! Here’s how to use Audacity to make music:

Setting Up for Recording

Whether you want to record live instruments with a microphone or make a beat using samples, it’s no harm learning the software basics.

After opening Audacity, the first thing you need to do is check the Device Toolbar and set up your audio host and project’s input and output.

The Audio Host is the bridge between Audacity and the sound device you’re going to be using. Depending on your operating system, your Audio Host can be changeable or not. According to the official Audacity Manual, the Audio Host works like this:

On Windows, you have three options:

On Mac, the only option is Core Audio.

On Linux, there is generally only one option: ALSA, but other options could be OSS or Jack Audio Connection Kit (also known as “Jack” or “Jackd”).

Suppose you’re using an audio interface to capture sounds, such as a Behringer, M-Audio, PreSonus, or Focusrite; you need to choose it in the Recording Device section, located beside the microphone icon within the toolbar. You’ll then select the number of channels in the device you’re going to be using to record.

You should check your signal flow to see if the sounds you’re sending through your microphone or instrument are reaching the desired output. Chances are it will be playing back OK, but with a slight delay. That is called latency, a small delay between sound input and output that can affect the user’s performance when recording to a click track or overdubbing. To fix latency issues in Audacity, you should open the Devices Tab and under latency, set the following parameters: 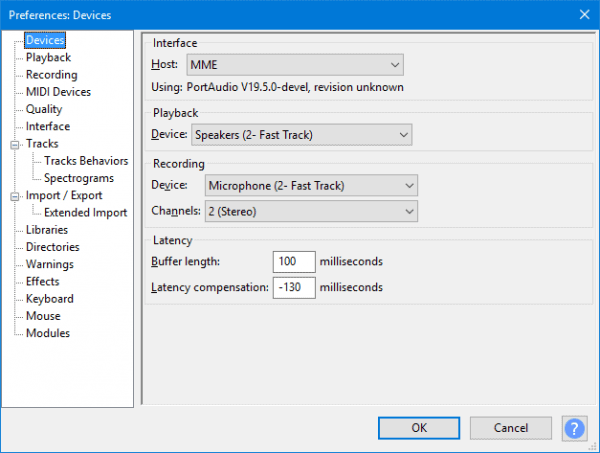 An overview of the Devices Tab in Audacity

If you have an audio interface that supports more than the default project sample rate (44.100 Hz), you’ll probably want your result to be more detailed and preserve more quality after editing. That being the case, increase Sample Rate and Sample Format at Edit > Quality > Sampling (or Audacity > Preferences > Quality on a Mac). If your system allows it, increase Sample Rate to at least 48000 Hz and Sample Format (or Bit Depth) to 24 bits, thus making sure you’ll end up with higher quality recordings and mixes in the end.

Now you’re all set to start recording your vocals, keyboards, guitars, drums, or whatever other instruments you can mike up or plug into your audio interface!

Making a Beat from Scratch

If you decide to go the beatmaker way and come up with all-new, personalized sounds, you can! All you need to do is master the magic behind the Generate Menu. This Audacity feature lets you generate audio in three different ways:

By default, Audacity provides you with Built-in Generators, and Plug-in Generators, which you can use to make a beat like Levi Niha did in his YouTube video Making Music Using the ONLY AUDACITY:

Since working with audio means working with mechanical (and, in this case, completely digital) waves, Audacity lets you control how you want to shape these waves. All built-in generators let you type in a desired amplitude value and duration for your generated audio:

• Amplitude Value: In audio physics, amplitude roughly means the loudness of your soundwave, represented digitally in your DAW by a line that starts at the middle ground of the track and oscillates up and down, drawing a wave-like form. The distances between the middle ground and the taller sections of the wave (called crests) amplitude. The software lets you choose a value between 0 (silence, or the middle ground in the track) and 1 (the loudest before distorting, or the limit of the track), with the default amplitude being 0.8.

Parts of a waveform 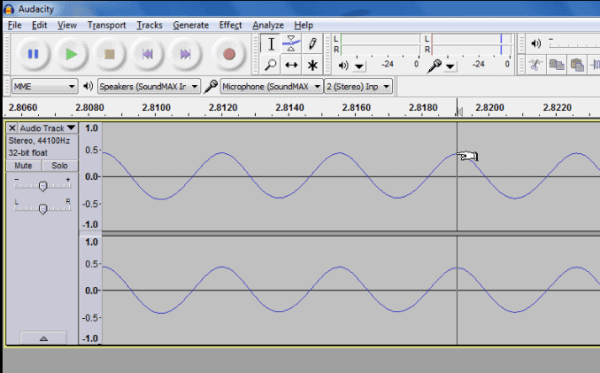 A waveform represented in Audacity

• Duration: This is simply the length of your generated sound and can be typed in or manipulated with the keyboard arrows. You can adjust the units in which you want to measure duration by clicking the triangle to the digits’ right and opening the context menu.

Here’s what a generated sound looks like with a fade-out.

The built-in generators Audacity provides you with are:

• Chirp: this can generate 4 different types of tones. You can set amplitude and frequency to your liking.

• DTMF Tones: generates sounds similar to those on telephone keypads. Typing numbers can generate its Dual-Tone Multi-Frequency (DTMF) sounds from 0 to 9, lowercase letters from a to z, and the special characters * and #.

• Noise: you can choose between three types of noise: White, Pink and Brownian. White is the one with a greater probability of masking other sounds or creating texture due to its nature of maintaining similar energy at all frequencies. Pink and Brownian noise have both more energy at lower frequencies and less controllable amplitudes.

• Silence: In this generator, the only configurable setting is duration since amplitude will always be set to zero. You can use it to create space between tracks or cover unwanted noise. If you apply it to an audio selection, you’ll achieve the same result as choosing Edit > Remove Special > Silence Audio.

• Tone: This generator lets you create one of four waveforms: Sine, Square, Sawtooth, and Square (no alias). The differences in tone can be heard right away when compared. A sine wave is a natural, continuous wave, a pattern found easily in nature. A square wave is an electronically generated sound, and a sawtooth wave can be found in analog synthesizers.

• Pluck: A quick sound with abrupt or gradual fade-out. You can select the pitch, so it corresponds to a MIDI note.

• Rhythm Track: a fully configurable metronome track used to help you keep the tempo and follow the song’s bars. Very helpful considering that Audacity, unlike most DAWs, doesn’t have a grid you can align audio to.

• Risset Drum: the closest you can get to sampled drum sounds within Audacity. It takes some testing and tweaking to get great results, but it’s totally feasible.

Some Audacity built-in Plugins to Consider

After you’re done building your beat, recording tracks, and mixing the levels of each track, you should consider trying out a few built-in Audacity plugins to improve the overall sound of your mix. While each engineer has their own way of applying effects and textures to a mix, there are a few plugins you’ll end up using anyway. Here’s a brief selection of everyday effects you’ll find in Audacity within the Effect Menu:

• Compressor: a compressor is used to reduce loud sounds while increasing quiet sounds, thus reducing any given track’s dynamic range. The Audacity Compressor has five independent parameters that can be set to achieve the desired sound: Threshold, Noise Floor, Ratio, Attack Time, and Release Time. 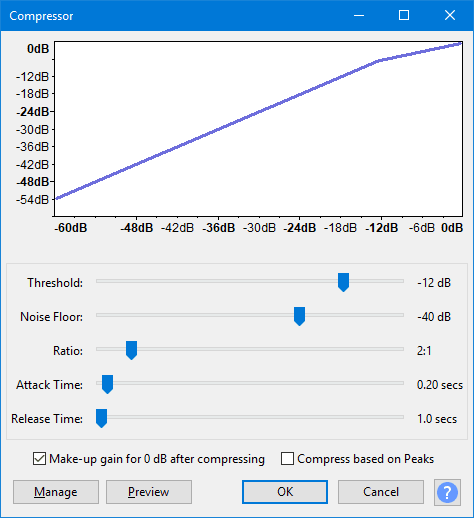 • Filter Curve EQ: whenever you need to reduce, cut or boost frequencies to make a sound sit better in the mix, you should go for an EQ. Sometimes only cutting or boosting low and high frequencies isn’t enough, and that’s when Audacity’s Filter Curve EQ comes into play.

As most sound engineers will tell you, there’s no right or wrong in equalization, just what sounds good in the mix. So, use your ears and creativity to achieve whatever sounds you feel are good for the song! Here’s a video by Team How To showing how to use the Audacity Filter Curve EQ:

• Graphic EQ: this equalizer does the same as the Filter Curve EQ, but with sliders, rather than draw curves. It is perfect for boosting or cutting specific frequency regions that might be putting your mix off balance. Here’s a quick EZ Tutorials video showing Audacity’s Graphic EQ parameters:

• Reverb: this effect can be used to simulate a controlled ambiance that can make your recording more natural and give the impression that some instruments were recorded in the same room. The Audacity Reverb has many parameters, but it is not very complicated. Here’s a video by Young Halfington showing how to use the Reverb plugin from Audacity:

Audacity empowers independent producers and musicians with free software capable of catering to seasoned producers and curious beginners. What it lacks in its not-so-visually-appealing user interface is compensated in the number of features and versatility.

The biggest downside for most producers is the inability to record anything MIDI, which can slow the workflow down for some people. However, you can still record, mix and master an entire album, or record and edit podcast audio, on this competent, user-friendly platform.