The analog audiotape was a pioneer invention that significantly progressed audio recording and playback. In this article, we take a look at how they work and more.

The audiotape, developed in Germany in 1928, is based on magnetic recording technology, which was first accomplished using magnetic wires. It revolutionized the audio media, providing access to audio recording without complicated machines and polygraph records.

Nowadays, we see many modern music producers using tape emulations and even real tape recorders in a DAW-less setup. But how exactly does audiotape store sound? And why do they sound so unique? Let’s talk about that.

First, some base information: as we know, audio has two measurable fundamentals: frequency and volume. When these two data are stored in a medium, we consider the audio recorded, whether in vinyl grooves or analog audiotape.

So, how does the analog tape work?

When an electromagnet is fed an audio signal, it generates positive and negative flux based on the peaks and troughs of the audio waveform. Similarly, the loudness determines the strength of the flux. The analog audio tape stores these “messages” for a tape player to decode.

The tape has magnetic materials like iron oxide, chromium dioxide, or barium ferrite mixed with chemicals and binders covered on the surfaces. When you bring the electromagnet close to this surface, the flux it’s generating move the magnetic particles into peculiar formations.

These formations of iron oxide or other magnetic material are later read by tape player heads and transformed back into an audio signal. Interestingly, the chemical slurry used on the tapes ensures only a magnet can move the particles. So, they stay safe from physical contact.

How Do Audio Cassette Tapes Work?

How Does Vinyl Work?

Analog tapes store audio on a physical medium (magnetic particles) using another medium (electromagnets). Both the recording and reading processes introduce a variety of characters, causing a unique sound. These characters include saturation, noise, stereo cross-feeding, frequency loss, and more.

The tape’s motion and fluctuation in speed due to motor physics add a “wow” or fluttery effect. And when the tape’s magnetic particles aren’t aligned perfectly during recording (which is often the case), we get crackles and pops that add to the trademark tape sound. 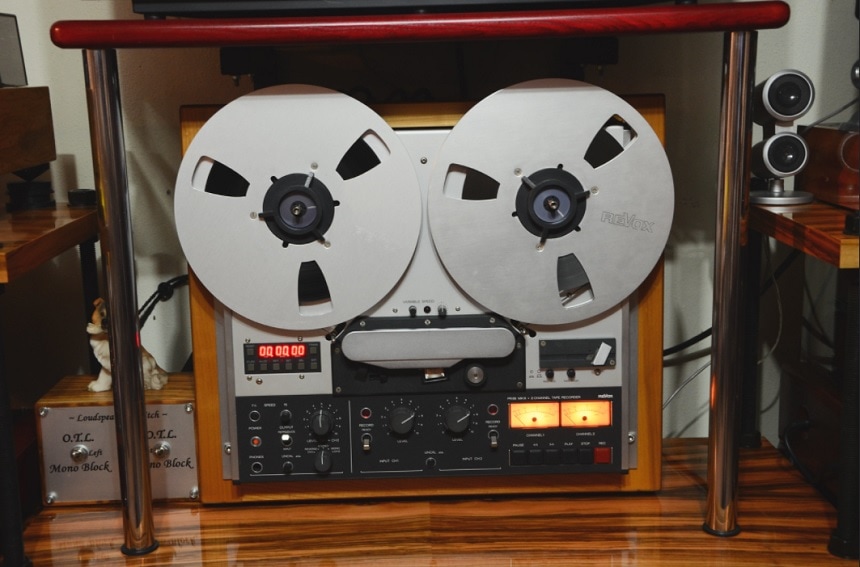 Here are two of the most infamous tape recorders that were significant landmarks in professional tape mastering:

The Ampex ATR-102, introduced 45 years ago in 1976, is still widely regarded as the best mastering deck ever constructed. It used a pitch roller-less design with servo-controlled reel motors and large capstans to ensure smooth, continuous tension and tape handling. It had virtually nonexistent speed drift and extremely low flutter.

Furthermore, its unique plug-in head block allowed users to replace heads/guides in minutes. And lastly, its tube electronics were much loved as well, particularly for its interesting textures in the high frequencies. Even running anything through the tube electronics without touching the tape could get a beautiful effect.

While there is no modern equivalent of this hardware mastering machine, you can get a similar effect using the Ampex ATR-102 emulation by Universal Audio. 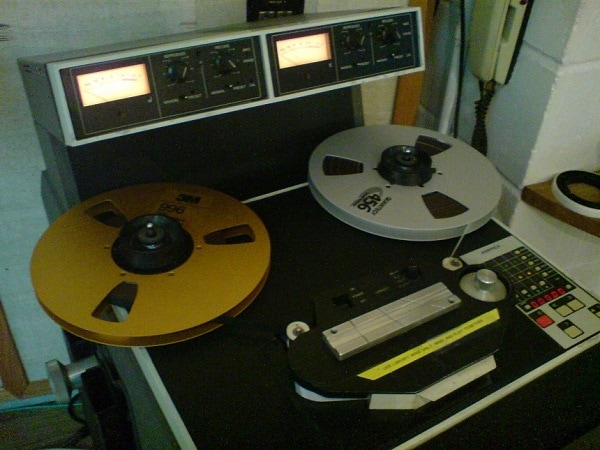 Another master tape recorder, the Studer A820, was known for being compatible with just about every kind of magnetic tape for audio with multiple speeds. Furthermore, it also featured a servo-controlled transport system alongside processor-controlled PWM motors and pitch rollers.

Back in 1984, when Studer first revealed it, the A820 was recognized as one of the most modern tape recording machines ever built. And no wonder with its software reference settings, unique-sounding audio system, and built-in monitor speakers.

What Is A Tape Emulator Plugin?

Tape emulator plugins mimic the characteristics of analog audiotape and other tape-based effect plugins. The emulation often includes saturation, motor physics, and even noise and crackles. Similarly, the tape delay effect is a standard inclusion.

People love these effects for their unique and warm sound. Further, the tape delay can also give distinctively saturated echo feedback, an infamous technique in rock and roll and hip-hop.

Depending on the device emulated, there are a few fundamental characteristics that define tape saturation. These include but are not limited to:

There is also a wow and flutter section that adds fluctuation to the audio pitch and signal. If you’d like to give it a try, you can also have a look at the free Tape Cassette 2, featuring only the Cassette emulation variety. 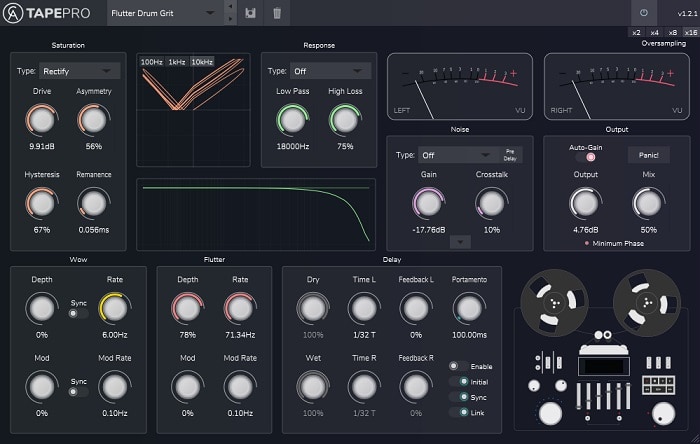 Reels is an emulation of a vintage, portable reel-to-reel recorder. So, the plugin doesn’t sound like the often-emulated high-end tape recorders. Instead, it focuses on sounding incredibly Lo-Fi, which it does well.

It emulates the saturation, the stereo blend, and wow/flutters to make the audio sound retro. Further, it also has a noise section to add hiss and motor noise. And if you use the transport switches on the plugin, it does the tape-start/stop effect. 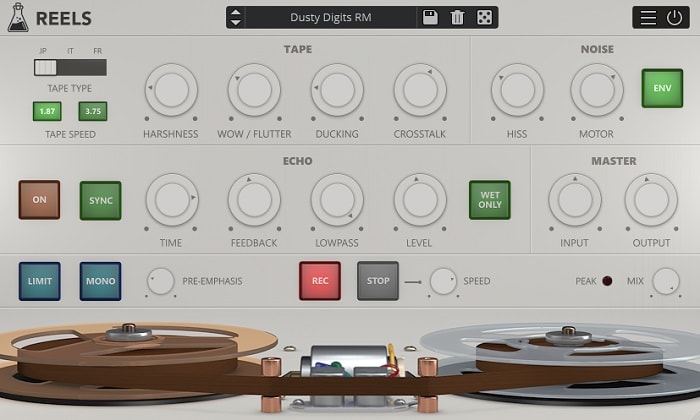 Softube Tube seemingly offers fewer controls than its competitors. It boasts component-level emulations of three tape machines. Furthermore, you can adjust the amount of coloration and tape speed from the interface.

However, behind its simple interface, it hides a “remote control” panel. It reveals a mastering-grade high-shelf filter, stability control, stereo crosstalk, etc. Overall, the plugin lives up to Softube’s reputation for quality. 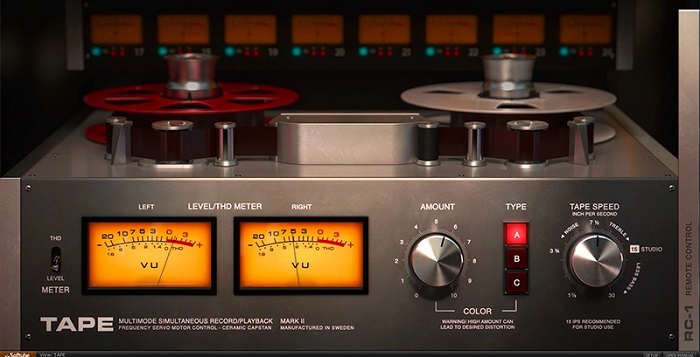 Is Analog Recording Better Than Digital?

The most significant advantage of analog recording is the unique sound quality. Analog formats add destructive noise and saturation to the audio in every processing step, whereas digital is extremely clean. This seeming limitation gives the recording a character that people are familiar with and love.

Using a master tape recorder has been a “secret sauce” in many a music producer’s signature sound, whether it’s in plugin format or hardware. Further, hardware limitations force you to be more creative as opposed to relying on technology.

Furthermore, while this may not be related to recording, analog mediums like vinyl records are better than digital because they support artists more. If you’d like to learn more about digital streaming vs. analog, have a look at our article on how vinyl records work.

What Is The Advantage Of Digital Audio Over Analog?

The most significant advantage digital audio has over analog is in being cost-effective and reliable. Similarly, the processing in digital audio is much cleaner, and you can also recall previous mix sessions without having to note down parameter values.

Let’s talk about the advantages in a little more detail:

Why Is Digital More Reliable Than Analog?

First, digital storages aren’t susceptible to physical damage. Further, you can store digital files in multiple locations cost-effectively. For instance, if you were to use a cloud storage service to back up your files, you can have your files saved in numerous countries with virtually no chance of data loss.

Also, even in a single stored instance, digital data doesn’t change over time, whereas analog tapes can get tattered due to age and overuse. Similarly, there is no degradation in digital transfers, but copying data from a tape to another can lose quality.

Is Analog Tape Still Made?

As of 2021, two companies still make analog tape: ATR Services of York, Pennsylvania, and Recording the Masters in Avranches, France. However, it isn’t easy to ascertain if they will last the end of the decade. Although, if the newfound interest in tape keeps up, we might see more manufacturers emerging too.

Do Studios Still Use Tape?

Not all studios do. However, the studios and mastering services with master tape recorders boast of them as an option for their clients. They often charge extra for using analog tape. Abbey Road Studios is an infamous example, and similarly, Audio Bay Mastering studio is another.

How Much Does It Cost To Record On Tape?

Acquiring all the equipment needed for professional recording on tape and maintaining them can lighten your wallet considerably. For example, a used master tape recording machine can range anywhere between $400 to $2,000—similarly, a single reel of two-inch tape averages around $200.
If you are interested in only recording individual tracks, you can also consider cassette recorders, which are far cheaper and available from around $50 to $200. Or, you can have a studio like Audio Bay master your track on tape for $275 for up to 40 minutes of audio plus $90 per song.

Analog tapes are less a necessity and more a desirable effect in music nowadays. However, knowing what is involved in this much-loved effect helps us understand the emulation plugins deeper.

And even if you aren’t a musician, it’s always fun learning about the technologies used in the past that pioneered our computers and smartphones. And they did so quite directly, too; magnetic tapes were once used to store computer data before the hard disk was invented!