In an attempt to purchase or choose the best MIDI keyboard, many are left puzzled, left in the middle of amusement and perplexity when they encounter a variety of Keyboards with exceedingly equipped features that make them indecisive and not necessarily because they’re not choosy.

Far from that, the thought made on the acquisition of Keyboard is beyond what many may think. It’s what requires critical reasoning and careful decision. The sounds produced by your proficiency on the keyboard are dependent on the kind of choice you make to settle for a particular type of Keyboard.

You must get acquainted with a few things such as the synthesizers, starter pianos (If one is a newbie in the world of music), the types of keyboard and their common specifications, actions assigned to features, and what they are meant for. Also, which kind of brand to patronize to avoid the ones who won’t see to your problem if there’s an uprising one, and a long stretch of other needful tips that will aid you to own a lasting and helpful Keyboard in the building of your skill.

1. Consider The Number of Keys

The crucial thing to consider before the purchase of a MIDI keyboard is the number of keys. It should be the preclude consideration to make of which other tips should lie on. One’s familiarity with the keys, especially for beginners, is exposure to other effects, the faders, the knobs, and others. You need to know the size; weight, width, length, and space it could occupy on a table on which it is placed.

MIDI Keyboards comes in different dimension crested with different sizes and a different number of keys. This could serve as merit or loopholes to any of these keyboards. Some occupy more space, some are mobile, and some are too fragile. The benefits, in some cases, envelop the loopholes. The commonly used keys are :

We have also got some uncommonly used keys such as the 33 and 37-key, 73 and 76-key. The 25-key and 49-key are made with a synth or semi-weighted actions. Some have just the semi-weighted action, which deals with the ideal way of playing speedily. Some keys have hammer actions; some have the waterfall keys and other assisting features. It would be extensively explained below. 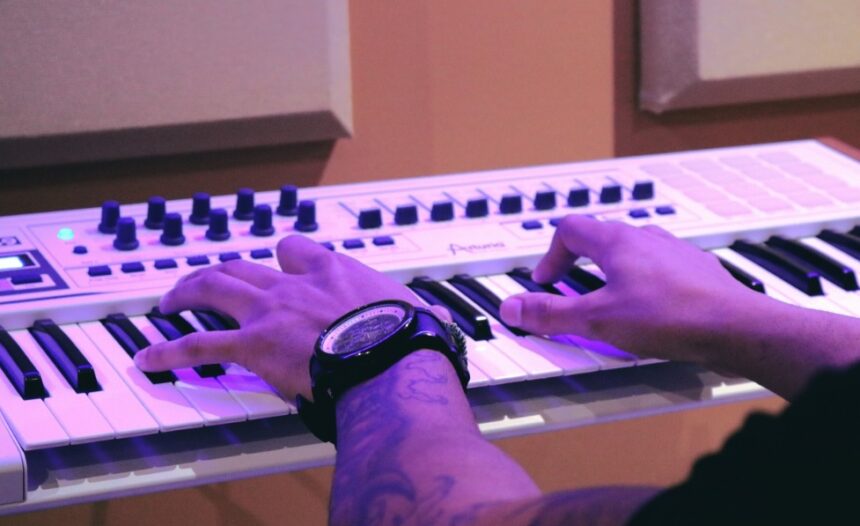 You need to familiarize yourself with the action permeated to a key; your awareness of this helps build your skill, such as:

With the above, it is certain to arouse the interest of many to get from the 49-key above. In contrast, many are unsatisfied because the 49-key Controller is not enough to play a Rhodes emulation. Some persons prefer the usage of keyboards with velocity and aftertouch.

2. Consider The Knobs And Controls

After getting to know the size of the Keyboard controller, and the number of keys it consists of, find out for better keyboards with knobs, faders, and pads that will give an enthralling feel of functionality to the sound. You sure want to acquire one that will bring out the best of your music dexterity.

The recommendation will be made in the latter parts of this discourse. Control devices equipped with many MIDI keyboards allow for the maneuvering of sound generation and DAW controls. If truly mapped to the correct function, it is saddled with the function of emanating better pleasing sounds and having access to the DAW(Digital Audio Workstation).

The above controls are important factors that need enquires for the purchase of the Keyboard Controller. 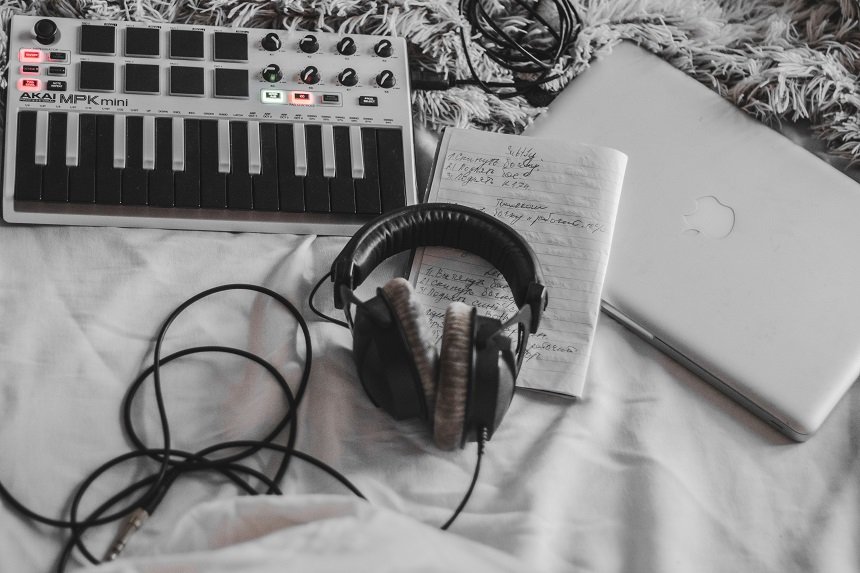 You certainly want to exert the best from you. It is essential to acquire a Keyboard that will extensively promote and aid in building your skill. Get compatible Keyboards based on their flexibility, portability, and most especially consider the keys, sounds, knobs, compatible DAW, and other specifications.

Are you a stage player, a virtuoso, a veteran, or a professional? Then do not puzzle or leave your audience with a seething, screeching, and honking tone.

Cheer them with mind-blowing, captivating, and alluring sound, something that will be struck their heart and leave memorable traces in them.
This is better achieved with foreknowledge on compatible keyboards.

The second tip that should come to mind is the keys, the controls, and other crucial functions. Your decision, if duly made, is a determinant of the quality of music you intend to usher to the public.

Find out how MIDI Controllers differ from digital pianos

The 12 Best Yamaha Keyboards With 88-Keys

How Do You Fix a Dead Key On a Keyboard? What Do I need?

4. Consider to Buy MIDI Keyboard Having More Than 25 Keys

Most experts in music production would be quick to christen the 25-keyboard as archaic, outdated, or loss of value. It’s partly correct in some sense because it hinders the production of a complex composition of sounds, or maybe the user is concerned with creating a bass or instruments made with one hand.

It does not hide the merits of the usage of 25-key; it has more portability and occupies a few spaces. Its portable state makes it so easier to move places on a train and play. The loopholes of the 25-key are the inadvertent shortage of the player’s creativity and the innovation to formulate better sounds. The more keys a Keyboard is equipped with, the more pathways are to creating a creative atmosphere. Indeed 25-key occupies little space and are more cheap and affordable; one has to consider the limitation and complexities that are inherent in the course of using it in music production.

Do ensure to get keyboards with more buttons, pads, and knobs. You could assign these midi parts to a specific function that will hasten, free, and ensure simplicity.

A multitimbral Keyboard sends multiple channels of MIDI information. The multi-timbral Keyboard is fascinating as it allows the player to concomitantly play different timbres, otherwise known as sounds or patches.

This might be rare for most Keyboard, but ordinarily imagine the magnificence of playing different tones at a time due to this befitting feature; how will your listeners, astounded by this blend of tones, react? Sure, their reaction is an addition to you as you will win more scores for yourself.

The instrument, which may be multitimbral, includes synthesizers, samplers, and music workstations.

Also, consider polyphony. Polyphony is a simultaneous playing of keys with simultaneous production of the tone. It could be six notes being six notes; either they sound at a time, or it follows after the stoppage of the other.

NOTE: Some discrepancies exist between polyphony and multitimbral. Polyphony deals with simultaneously playing different notes at a time, but Multitimbral is the simultaneous playing of different sounds at a time.

It is important to watch out for these two highlighted features as they will go a long way for your music production.

Storage is extremely important to be checked on, for it enables the reservation of needful files that envelops multitudes of tones and sounds. You should pursue a better storage capacity that won’t only assist your work at that juncture but beyond even after freelancing or practicing. For those new to music production, practice makes perfect; it is better achieved with the aid of wide storage capacity, so target a better one.

This deals with tone generation and how the synth works. You need to target a bevy of a keyboard that is made with the availability of this feature to explore the more in music production.
For clarification on what a sampler and a sequencer are;

A Keyboard sampler can record any natural sound with an attached microphone, which may be converted and used as a waveform or a sample. The waveform is accustomed to a particular key on the keyboard.

A Sequencer can be a simple record button that saves a performance in real-time. The sequencer helps send different tracks on different MIDI channels to MIDI-connected keyboards, modules, and computers. 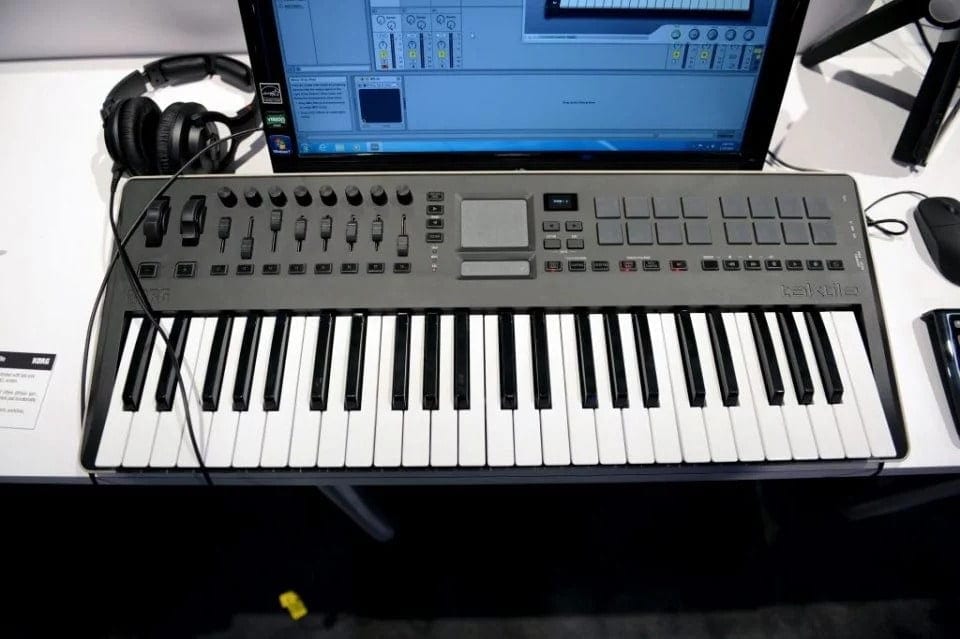 This is basically the interest of a few persons who want the encompassing of all. You need a synthesizer. A synthesizer is internally interwoven, equipped basically for sound emanation.

The synthesizers could produce real word sounds like kettle drums, boiling oil, the rattling of iron, and possibly create new sounds that are never known.
This unique feature is what many taste for since it gives the privilege to formulate resounding melody and captivating sounds. The synthesizers could be connected to a PC or via using the MIDI (Musical Instrument Digital Interface).

This is where you notice the similarity of the synthesizer to the sampler and sequencer. They deal primarily with tone generation and modulation. Therefore, why not concede on a better keyboard with the explained features and soars higher in your music field.

Should I Buy A MIDI Keyboard Or Synth? (Are Synths Worth It Anymore?)

Should I Buy MIDI Controller Or MIDI Keyboard? (What’s The Difference?)

Quite a several times do fault bumps up or erupt so suddenly that it alters our progress and effectiveness. In cases like this, consumers of the MIDI keyboard controller are left to worry about these setbacks that have aroused with no clue of pinpointing what had purged the faults. Some consumers who know the warranty fixated on these acquired products are made to return to the producers to help repair or replace it with another.

So why do patronizers don’t need to be oblivious when it comes to better brands to acquire? It is primarily to make things so easy for you peradventure sudden faults hampers or cripple the functionality of your keyboard. We have cited the reason above, and in addition, you’re being acquainted with brands and the end products they create.

In some cases, they are brands that are more specific in the production of a keyboard with a unique function.

We’ve made a brief, concise explanation of the above ten tips, to supplement it with this last point shows our commitment to guide you in the purchase of the best MIDI Keyboard that will spur out the inherent skill in you, to help join hands in making waves in the music industry.

So, do take your time, research, and make a good comparison on various MIDI Keyboards before you order one. Strive for the best.

This article should serve, assist, and give you advice and direction. It is cogent not to skip any of the outline tips, as every bit that makes these 11 tips contribute to a wider extent.

Therefore ruminate on them, make a stern decision, fasten yourself with the tactics and endeavor to adhere to them to guide you towards the processes of being an expert in the music industry, or perhaps it’s for one’s pleasure, your familiarity with these techniques will promote the production of exhilarating sounds that smoothen oneself.