This article will discuss if you should sidechain everything to the kick track or vice-versa.

Sidechaining ensures that the source audio signal triggers the effect plugin on the target audio signal. For example, while mixing a track, it’s a common practice to sidechain kick and bass. In this scenario, typically, the effect is a compressor, the kick is the source, and the bass is the target. Simply put, a compressor is applied on the bass track that only acts when the kick occurs.

However, sidechaining can also be used as an effect. A lot of gated instruments or synths are created by sidechaining. You can use a sidechain on any effect, whether a compressor, gate, multiband compressor, envelope shaper, etc. Let’s understand if you should sidechain everything to the kick or not.

Should I Sidechain Everything to The Kick or Not?

Let’s understand both cases in depth. The first case is the one in which the kick track compresses the entire track. Here, we can set up two kinds of sidechains. The first sidechaining effect is when everything except the kick goes to a single track, on which a compressor is applied such that the kick drum triggers the compressor sidechain.

So, according to Deadmau5, setting up individual sidechain compression effects on different tracks is a better alternative. And I agree with him, as that can give you more control over how the kick impacts each sound, as each sound needs different treatment.

For example, any instruments that are mid- or low-mid-heavy will tend to fight more with the kick; hence, they need heavier compression with higher ratios, lower thresholds, and faster attack times. On the other hand, elements in the mix that do not stand in the way of the kick’s frequency range need a milder compressor.

For example, a synth track may need a compressor with a slower attack than a bass track. Likewise, rhythmic guitars will probably need compressors with faster release times. Rest, it depends on the genre you’re working on. Genres like House, Disco, Techno, and Trap are dominated by kick and may need heavier sidechain compression compared to genres like Future bass, synth-pop, dream pop, etc.

You mustn’t do sidechains on vocals by the kick, especially in genres like pop, rock, and hip-hop, unless that is the sound or effect you’re going for. Let’s discuss the second scenario, where you apply the sidechain compression on the kick triggered by the other element(s) in the track.

There’s a high probability that you’ll never encounter such a case and that the kick domination issues can be resolved by simple level balancing. However, it’s a good technique if you get a mixed song that is so dominated by the kick that the kick needs to be compressed at a certain point in time.

Mostly, tom and kick can fight each other. In that case, you can sidechain the tom to the kick track. Similarly, you can do so with other percussions as well.

How to sidechain the kick and the rest of the track?

We will take an example of a mix session in FL Studio to understand the process of sidechaining the kick with the song’s other elements. The process is simple. You have to route the kick as a sidechain signal to all the tracks you want to trigger the compressor by the kick. Next, you will load a compressor on those tracks, enable the sidechain, and adjust compressor parameters for the best settings. 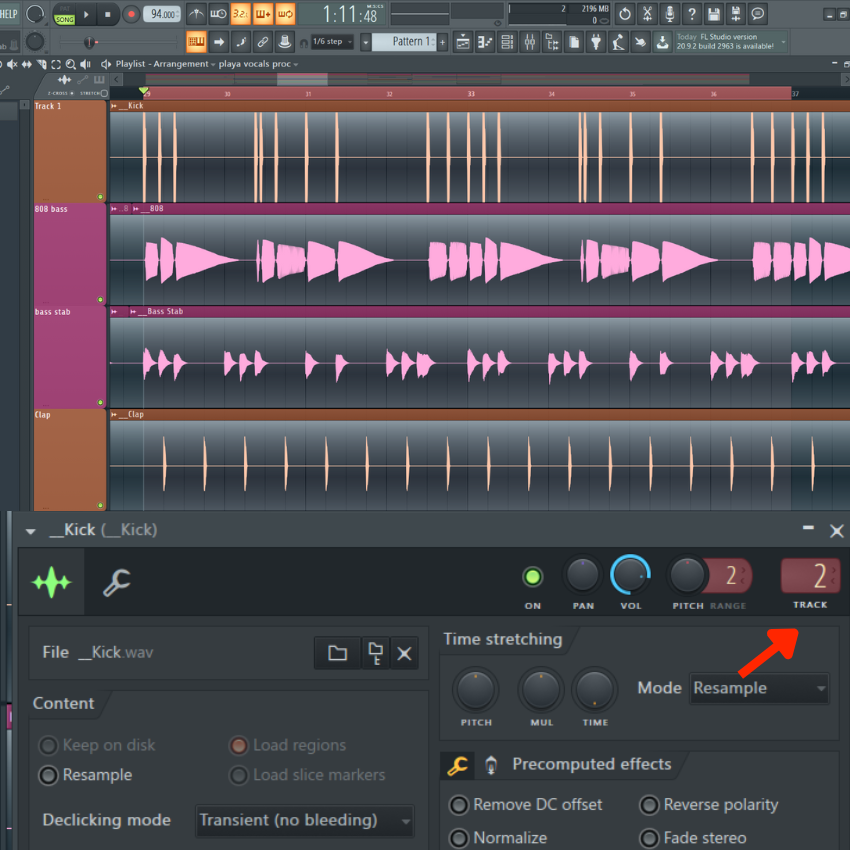 Also, ensure that tracks are going into the mixer channel. You can send the track to the mixer channel by opening the sampler of the waveform and routing it to the channel by scrolling on the “TRACK” input up to the insert number. In the example, we will see only one track, which is bass. You can repeat the same process for the other tracks as well. 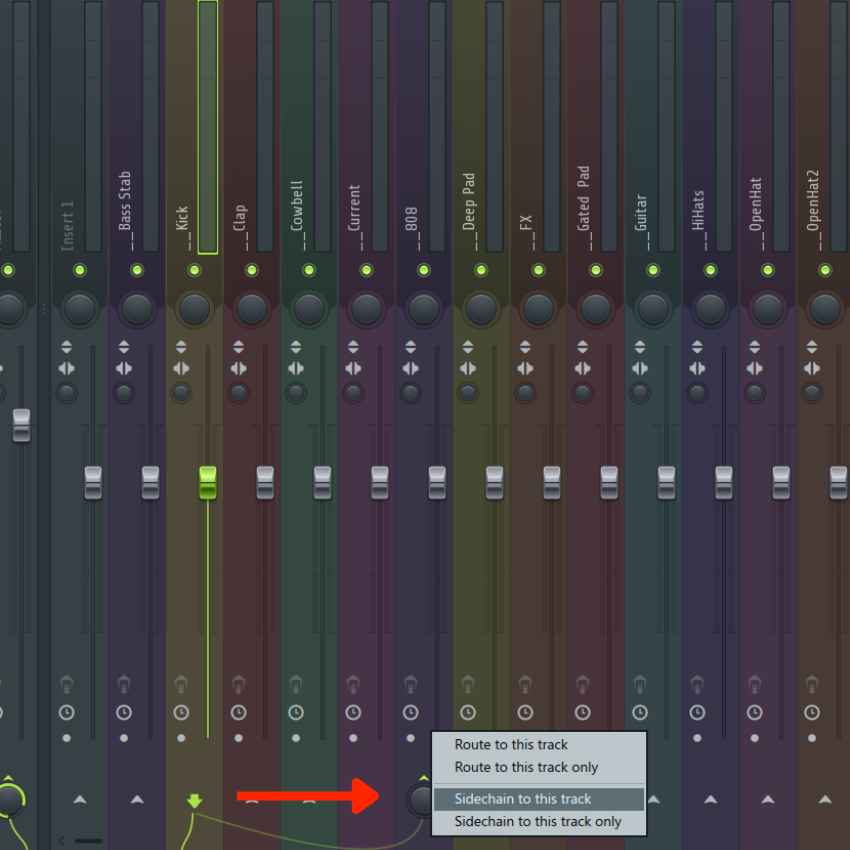 Next, go to the 808 bass track, and add a compressor with a sidechain effect. Here, we load up a Fab Filter Pro-C2, as shown in the image below. After that, click on the “SIDE CHAIN” button, and select external sidechaining by clicking on the “EXT” switch. Once you do that, you set up your compression by adjusting its settings and parameters. 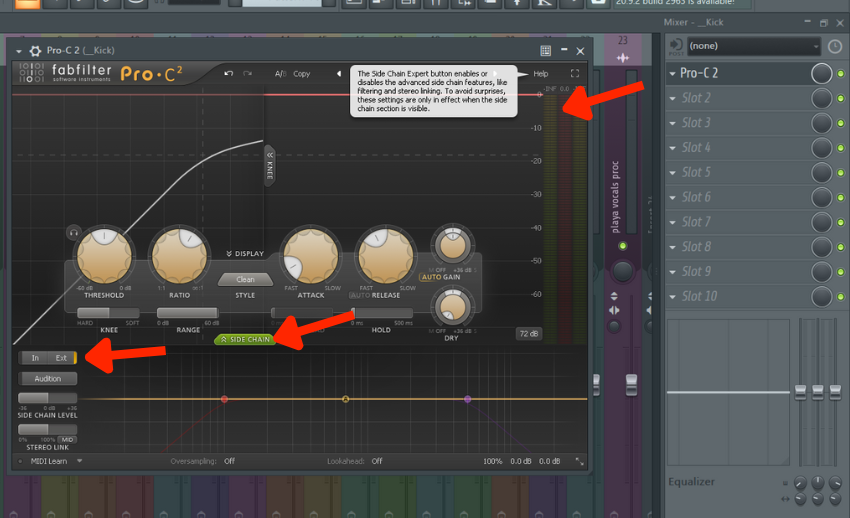 However, ensure that make-up gain or auto-gain is disabled. The sidechain compression has been set up, and the 808 bass track will be compressed every time the kick plays. Now, repeat the same process for other elements as well.

Sidechaining everything in the mix by the kick can be a complicated and time-consuming process, but it’s a sure-shot of way to make your kick stands out in a clean and uncluttered manner. Rest, how you set up compressors will decide how musical the sidechaining sounds and how bouncy and danceable the track is.

A way to prevent performing so many steps each time while setting up sidechaining on each track is to use plugins like Kickstart, LFO tool, and Gross Beat on your track(s). For example, Kickstart is a plugin that will dip your track in every bar, 1/2, 1/4, 1/8, or 1/16 note. That’s a great way to easily sidechain elements in tracks with 4/4 kick patterns.

Similarly, you can set up different amplitude responses or envelopes using the LFO tool or Gross Beat.

If you are interested to create sidechain template for your project in FL Studio, we recommend checking Buunshin’s patreon plan, where he made video on this subject. It’s a nice shortcut, and it avoids you to create new sidechain all the time.