When it comes to affordability, REAPER continues to make its name as a budget Digital Audio Workstation. REAPER, or Rapid Environment for Audio Production, Engineering, and Recording, has gone a long way since it was first released in 2005. But more than 15 years later, is REAPER still worth the money?

Is REAPER worth it today?

REAPER is still worth it today, considering the amount and quality of plugins it offers each user. These plugins are of professional grade, and the software is also quite light to use. On top of that, the $60 price it gets is quite hard to match and can only be beaten when other paid DAWs drop their prices.

REAPER continues to land in the top DAW list of other websites, a testament to the power it holds as budget-friendly recording software. But, unfortunately, you’ll be hard-pressed to find something that matches its power and price.

A Brief History Of REAPER

REAPER started as a freeware developed by Justin Frankel, who’s also the brains behind Winamp, in December 2005. Then, on August 2006, REAPER became a shareware software. In both instances, REAPER was a Windows application.

REAPER eventually branched out to the macOS and Linux platforms. To date, REAPER holds the recognition of being one of the few cross-platform DAWs that runs smoothly on Linux and continues to be distributed by Frankel’s company, Cockos.

How To Get REAPER

Some users have reported that you can still use it in evaluation mode, even when the prescribed period has lapsed, but that’s an ethical decision you’ll have to make. 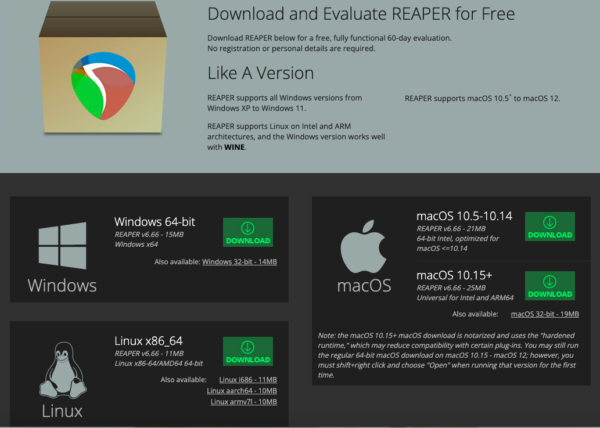 One thing notable with REAPER is its compatibility with different operating systems. You won’t have a problem running it on Windows, macOS, and Linux, which doesn’t have as much compatible recording software.

REAPER has rather light system requirements as compared to other DAWs. All you need is a computer running:

For storage, you only need around 25 MB of hard disk space. You can even run REAPER from a flash drive!

While Cockos didn’t specify how much RAM you need for its memory requirement, it’s safe to say that 4 GB RAM will allow REAPER to run smoothly. In addition, some users have noted that REAPER looks more at the processor than the memory, which makes it lighter to use than other DAWs.

You’ll notice its loading speed when you start REAPER for the first time. The DAW loads quite fast, but the speed will vary on the number of VSTs REAPER will scan and load into its system. REAPER won’t take a minute to load if you don’t have many plugins. 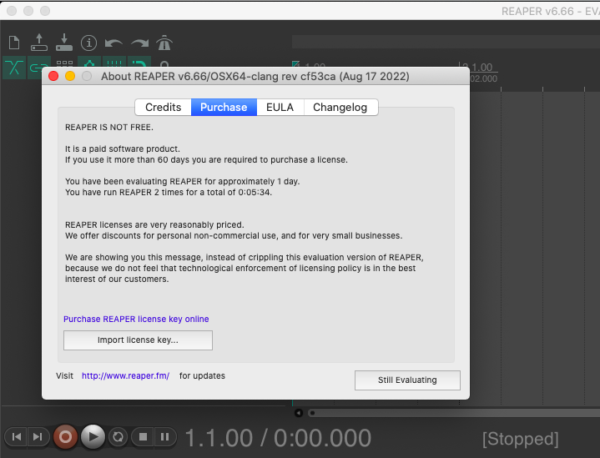 REAPER will notify you that it is not a free application. You’ll be prompted by this window reminding you of how long you have REAPER installed, as well as the option to buy a license online.

The user interface of REAPER might look simple, but it takes some navigation to get used to. Unlike other DAWs, where you instantly access key features, you could get lost in a sea of menus to find the features you need.

There’s a learning curve that needs to be overcome with REAPER. It gets complicated if you’re not a technical person, as part of the power of REAPER comes from the downloaded plugins. But, once you learn to install plugins, it will be a walk in the park to use REAPER as your DAW. 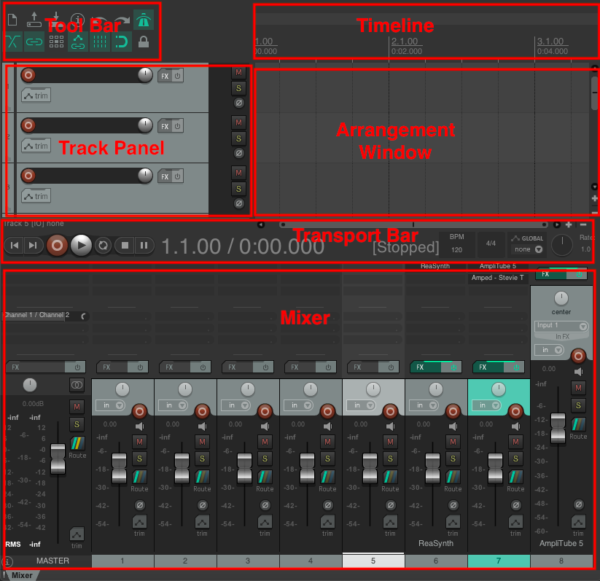 REAPER has six components in its main window, which are all essential in helping you create songs or even produce audio recordings, including podcasts. The layout is a bit different from other DAWs, as certain control bars on REAPER are located in different locations than other DAWs.

What Do You Get With REAPER?

REAPER offers users 34 effects plugins, including compressors, equalizers, and reverb. You can opt to add more with it, as it features compatibility with VSTs. You can get many of these free plugins on the REAPER website, aside from third-party VST plugin developers.

In addition, REAPER does not include virtual instruments, save for ReaSynth (pronounced re-synth). To activate ReaSynth, you can either:

REAPER Compared To Other DAWs

As REAPER is a budget-friendly DAW, it would be good to compare it with other affordable options, such as the free ones and those that cost slightly more than its price of $60. For this, let’s look at REAPER and how it compares with Garage Band, Bandlab’s Cakewalk, and Presonus Studio One Artist.

REAPER and Garage Band are DAWs that are compatible with Apple. They allow multiple-track recording, but that’s it. So how do the two software differ?

Garage Band is free for all Apple users. REAPER, meanwhile, costs $60 but is also available for Windows and Linux users.

When it comes to features, Garage Band gains an edge over REAPER.

Regarding cost, Garage Band has an edge since it’s free. But, unfortunately, it’s only compatible with Apple devices. While costing $60, REAPER has an advantage with its compatibility and more powerful plugins.

REAPER vs. Cakewalk by Bandlab

Another DAW worth comparing with REAPER is Cakewalk. Formerly a proprietary software, Cakewalk is now free to use, just like Garage Band. This DAW takes off from its predecessor, Sonar, which was sold to Gibson Brands Inc., the same company that owns Gibson Guitars.

If there’s any free software capable of going head to head with REAPER for professional use, it’s got to be Cakewalk. However, while it’s free, Cakewalk has the disadvantage of being Windows-only, unlike REAPER, which is also available for Mac and Linux users.

REAPER vs. Presonus Studio One 5 Artist

REAPER, meanwhile, is much more stable to run compared to Studio One Artist.

For its pricing, getting Studio One Artist will cost you $100, which comes with more features. You can get more if you upgrade to the Professional Edition, which will cost more. REAPER is still cheaper by $40, but you get a few features that make this DAW a very competitive software.

What Are The Pros And Cons Of REAPER

REAPER offers a lot of advantages, as well as disadvantages, considering how much a license costs.

For its advantages, you can expect the following:

Considering the challenges you may encounter with REAPER, it is still a formidable DAW to consider. However, at $60 for a personal license, you can use REAPER as a way to get used to professional-grade DAWs before switching to more expensive recording software in the market today. 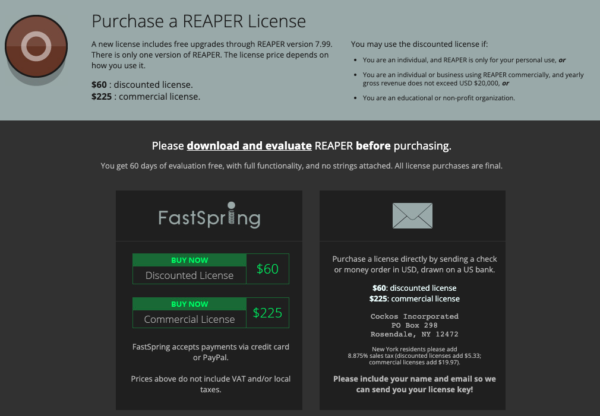 Should you decide to get a license for REAPER, you have the option between a discounted license, which works for personal use, and a commercial license, which is for those making money from using REAPER.

And when you manage to master REAPER, you’ll probably get used to its capabilities and not even bother switching unless there’s a compelling reason to do so. But for those doing these recording projects for personal use, REAPER is more than enough to get you by.

John Narciso is a guitar player and music technology hobbyist. He loves exploring guitar effects processors in pedal and plugin format and free music applications. His music preferences tend to be diverse, listening to genres spanning from metal to alternative rock and a little hip-hop.