Today we talk about the best hardware modular synths in 2022. But before we get into the details, we should first find out what Modular Synths are all about and why they’d be a good addition to your setup.

A modular synthesizer is a device that does not need a keyboard attached to it to produce sounds. Instead, as the name suggests, a mod-synth is put together by combining several separate modules, each of which has its own unique abilities and features.

The sky is the limit when it comes to the modules a mod-synthesizer may have. You can choose voltage-controlled oscillators, filters, noise generators, envelope modules, amplifiers, effect controls, and mixers.

It all depends on your goal and the sound you’re after, as creating a modular synthesizer can only be limited by your imagination. So let’s deep dive into some of the best mod synths in the market and see what each one brings to the table. 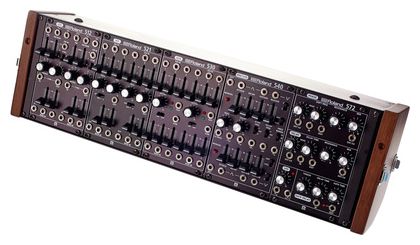 The System-500 unit by Roland is an all-in-one unit that gives you the utmost control for experimentation.

Takings inspiration from the globally renowned System-100M and System-700 modules, the System-500 comes in a Eurorack format with solid controls and a rugged exterior. As a result, the unit is very versatile and could be the ideal addition to your current setup.

The folks at Roland have packed the System-500 with voltage-controlled oscillators, filters, envelop generators, and effects to fulfill your every need. If you’re willing to spend, this particular offering from Roland offers the most value at the price point.

The Roland SYSTEM-500 is a unit packed with five comprehensive modules with dual capabilities. The features in each section give you total control of your sound as you get a barrage of buttons, knobs, and switches to get to where you need to be. The build quality is sturdy, and the wooden sides and handle lid give it a premium feel and add to the unit’s ease of use.

The controls are so jampacked and close to each other that the interface may initially seem confusing. Unfortunately, the clutter also eliminates any extra room for helpful/descriptive text, and you’re sure to inadvertently cause a change in the nearby parameters when you make adjustments. 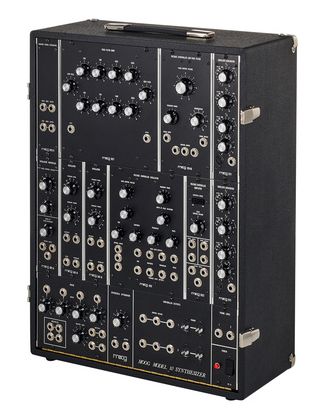 Introduced by Dr. Robert Moog in the 1970s, the Moog Model 10 is built to impress.

Packed with more than ten analog modules, the Moog Model is built like a tank thanks to its rugged wooden exterior and easy-grip handle that makes it easy to carry and take with you while touring around the world.

The ancestor of the Moog Model 15, the Model 10 is equipped with the perfect blend of vintage-style modules, classic sounds, and modern ingenuity. Known for its depth, detail, innovative circuitry, and timbral capabilities, the Mood Model 10 will not let you down.

The Moog Model 10 combines several very useful modules to tickle the fancy of many a Modular Synth junkie. The modular synth seems a bit daunting to understand and may take some time to get used to, but once you’re familiar with the controls, you’ll come up with patterns, drones, and beats in no time.

The Moog Model 10 comes with a jaw-droppingly hefty price tag which will make you want to look around for other options that seem to offer similar features without denting those savings. Perhaps something like the Behringer System 55 could be worth checking out, as it has a similar layout and comes at a fraction of the price. 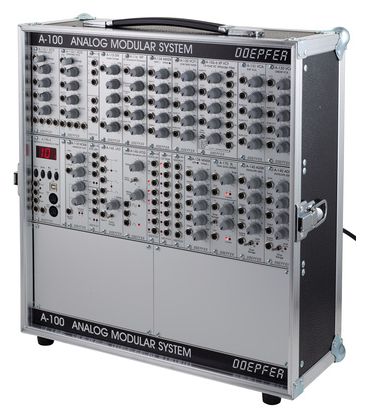 The Doepfer A-100BS2-P9 PSU3 is inspired by the larger modular systems found in the 1970s.

The A-100 series from Doepfer offers a multitude of modules that can’t be put together in the A-100BS2-P9 PSU3 unit’s spacious chassis. So you can get creative to build the perfect modular synth for your setup.

The unit measures 18.3 x 19.1 x 9.2 inches and has a lid with a convenient handle that adds to its portability. The base has 4 rubber feet and comes with 30 patch cables differently colored for ease of use.

The Doepfer A-100BS2-P9 PSU3 is a modular synth full of endless possibilities thanks to all the different modules in this multitasking unit. The subsections are easy to use, with user-friendly controls and plenty of input/output options at your disposal to unleash your creativity.

Some of the modules may behave unexpectedly, especially when they are reset. Also, you may notice a drift in frequency regarding the ribbon controller module. The Doepfer A-100BS2-P9 PSU3’s build quality is not the best, and their helpline is not very responsive, so you’re on your own if you face any malfunctioning issues. 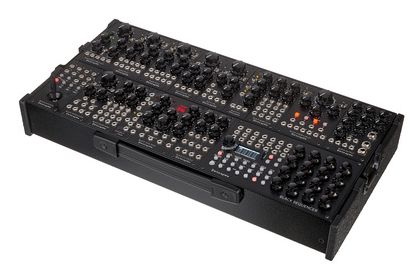 The Black System III is a desktop-friendly module with some undeniably versatile features.

The modular synth not only offers variations of oscillators, filters, and amplifiers, but the Black System III also has several intricately designed modules that enable you to create detailed delay effects and modulations.

Each module is cleverly designed to have multiple input/output options as well as buttons, switches, and knob controls so that you can dial in the perfect sound for the situation. Surely, the Erica Synths Black System III can be a great addition to your current setup.

The Erica Synths Black System III is a well-built, rugged, and yet very portable device with several applications in your home studio or live stage. The device allows you to create amazing leads, bass patterns, and drones and add delay and several other effects to your heart’s content. In addition, the sequencer on board is a great tool for writing music on the fly with 4 different step patterns.

While the Erica Synths Black System III is quite compact and manages to offer a ton of different modules, perhaps one of the few downsides could be the price tag it comes with. As a result, you may consider letting go of a few features and buying something more economical. 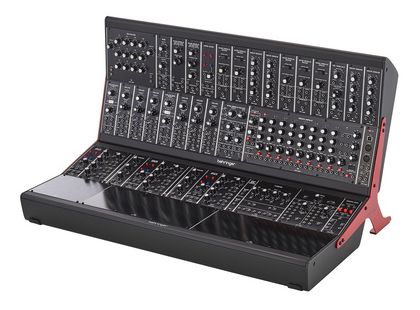 Behringer has tried to capture the essence of some of the classic modular synths from the 1970s through their System 55 modular synth.

Not only does the unit have the ability to accommodate some top-of-the-line modules from the Behringer range, but it boasts exceptional adaptability when it comes to third-party offerings. Add to that the easy-to-navigate interfaces that avoid clutter but provide just enough controls to get the job done, and you have yourself a winner.

The noise generators, oscillators, and filters are all there, apart from a few other goodies, including a versatile step sequencer and plenty of room for expansion thanks to the powerful circuitry under the hood.

The Behringer System 55 Complete Eurorack Modular Synthesizer offers many different modules to cater to the needs of Modular Synth users worldwide. While the device is complex, it is equally exciting to decipher and experiment with. In addition, the System 55’s ability to expand adds to its flexibility and ease of usage.

Contrary to most devices with the Behringer logo on them, the System 55 Complete Eurorack Modular Synthesizer is on the expensive side. As a result, you’ll think twice before investing so heavily in a unit that has cheaper alternatives in the market. 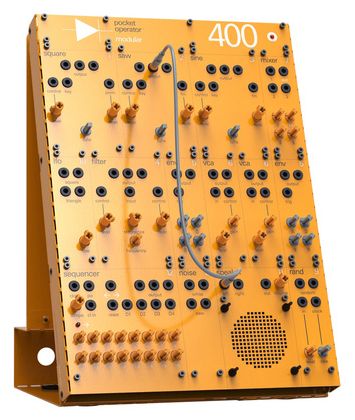 The Teenage Engineering Pocket Operator Modular 400 is perhaps the most unique-looking device on the list.

The Modular 400 is a breath of fresh air compared to the more complicated-looking modular synths. Everything seems easy to comprehend, and its unique design and build will make it somewhat of a conversation piece.

Judging by its diminutive appearance, you may mistake it for a device that isn’t capable of doing too much. However, diving deep into the features of the Modular 400 will surprise you quite a bit. The modular synth can deliver some interesting sounds thanks to its components.

The Modular 400 unit is very versatile, even though it may look simple in its appearance. You’ll find all the necessary modules like a mixer, a filter, oscillators, envelop section, a VCA, and more. In addition, the 16-step sequencer is nicely laid out, and the overall presentation of the Modular 400 is esthetically pleasing.

The Modular 400 does have its downsides. The angle of the frame is a bit annoying to work with. Also, the build quality of the knobs feels very cheap, especially when using the sequencer. Some sections have knobs very close to each other, so you may change the setting around them by mistake. Finally, the Modular 400 is battery-powered only. 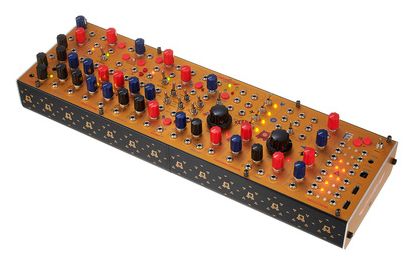 The Endorphin.es Shuttle System is a fun-looking mini modular synth with 5 unique modules built in.

Each module is named after space terminology as the same theme is reflected in its funky interface. Having 5 detailed modules in a single 84hp faceplate unit, the Shuttle System features filters, oscillators, effects controls, auto-tuners, envelopes, and much more.

No wonder this modular synth has grown in popularity ever since its release. The Shuttle System comes in a bright yellow chassis with multicolored knobs/buttons and a more subtle black colored variant with grey and white controls.

The Endorphin.es Shuttle System is very compact and can be easily carried around in your backpack. The devices have exciting modules that offer effective filtering, enveloping capabilities, and detailed reverbs and delays. In addition, there are several wave shapes to play around with, and the Furthrrrr Generator lets you unleash the capabilities of the built-in dual oscillators.

Although you may get a kick out of how the device is designed and decorated on a space theme, the folks at the Endorphin.es company haven’t done first-time users any favors. You may have to read the user manual cover to cover to decipher what each control actually does, as there are no helpful texts to explain the features. The Endorphin.es Shuttle System is also very steeply-priced.

A modular synth is as good as the modules used to create it. You now have ample knowledge of top-of-the-line offerings from brands like Roland, Behringer, Moog, Doepfer, Endorphine.es, Teenager Engineer, and Erica Synths. Surely you also know what modules each of these mod-synths offers and the features and capabilities of each component. Another great option to look into is the Nord Modular G2, which isn’t readily available but can be found in the secondhand market online.

You can now step into the world of mod-synths with confidence to explore and experience the different options from today’s post and see which is the right choice to fulfill your requirements. A good approach would be to list all the modules you prefer so you can customize them according to your preference. Good luck.