More Info & Price
A collection of worldwide iconic instruments that reflects the cultural diversity of humankind.

In ancient Egypt, Ra was regarded as the creator of everything, the god of the sun. He is usually represented with the body of a man and the head of a hawk, holding an ankh and scepter. The chief location of Ra worship was Heliopolis (a Greek word meaning city of the sun).

This is why EastWest’s team thought Ra would be an appropriate name for the largest and most comprehensive rare and ethnic virtual instrument ever made.

Quantum Leap RA was born a few years ago as a sample library called “Rare Instruments.” All of the sounds from Rare Instruments are also included herein RA, but this represents approximately one-tenth of the content.

Ninety percent of RA was recorded at Ocean Way Studios in Hollywood, with utmost attention to detail and exquisite sound quality. 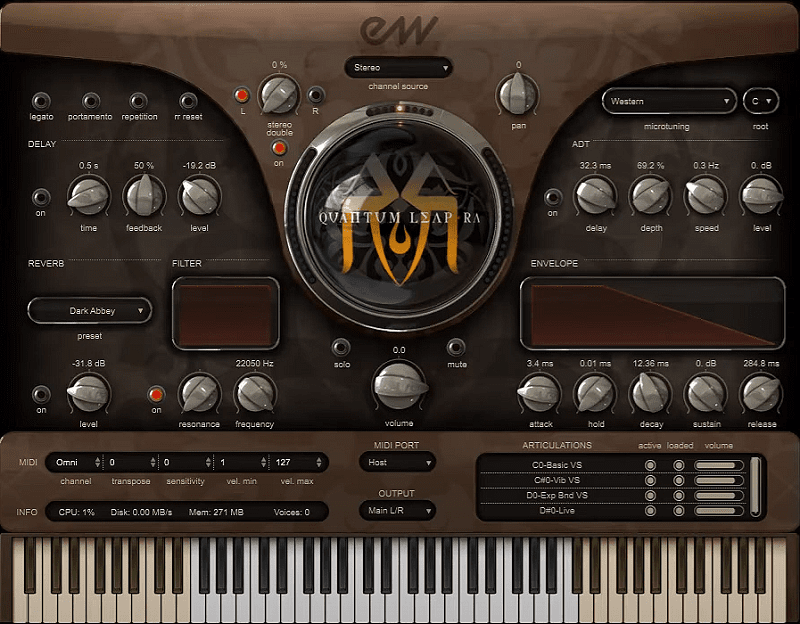 The amount of instruments present is impressive. You can instantly have instruments from Africa, Asia, or the Americas with great sound quality. They offer specific parameters as well as general configurations to make it sound just like you want to.

The screen can be a bit intimidating, but all possible configurations are present and displayed there. The algorithm and features included demonstrates how much time the developer’s team spent crafting this plugin, resulting in a great library for ethnic world instruments.

EastWest Sounds designed and released Hollywood Choirs with the mind put on the film industry. This plugin sounds classy, tender, genuine, and highly professional. The recordings are warm and natural as if they have not been processed later.

Hollywood Choirs is the sequel of the best-selling and most awarded virtual choir of all time, “Symphonic Choirs”. It features a female and male choir with great dynamics. It features 781 phrase presets in English, Italian, German, Spanish, and even Latin.

The phrases are editable if you need customization. It includes an improved WordBuilder engine, completely redesigned.

WordBuilder allows the musician the flexibility to type in a word or phrase and make the plugin sings that phrase. The engine works on the vowel and consonants interaction that builds up an unbelievable realism.

Instrument includes up to 13 microphone emulation types. This way, the composer (or sound designer) can set up surround sounds, virtual reality effects and 3D soundscapes using a few user-controllable knobs.

The plugin counts with all the essential tools for waveform adjustments (attack, decay, sustain, release). In the same way, you will be able to adjust all other vocal articulations, like legato, vibrato, and portamento. Fully customizable using MIDI CC events. 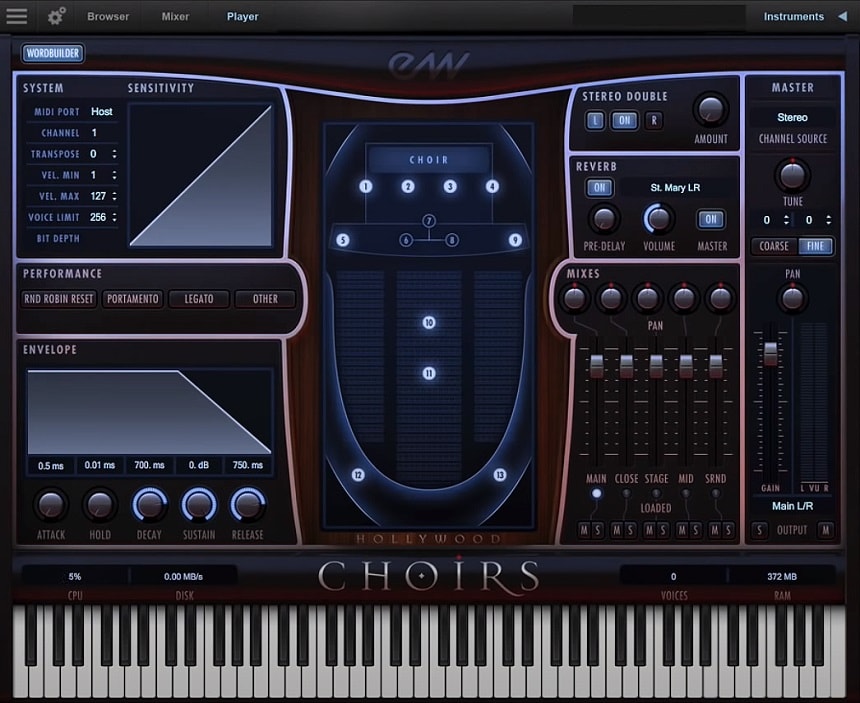 EastWest Sounds’ Hollywood Choirs is available for Windows 10 or higher 64-bit only and macOS 10.13 or higher. It comes in VST2/3, AU and AAX formats. Check EastWest website since not all DAWs are officially supported.

Designed for the film industry, Hollywood Choirs is one of the best plugins for the emulation of choirs. Including top-notched WordBuilder, it transforms the impossible into excellent songs. Its quality and customization are great. Hollywood Choirs will suit your needs, whether composing for backing up singers or scoring for a million-dollar production.

The Pianos Gold library took over two years of recording, editing, and programming to develop. It features numerous samples per note in various playing styles at different velocities. 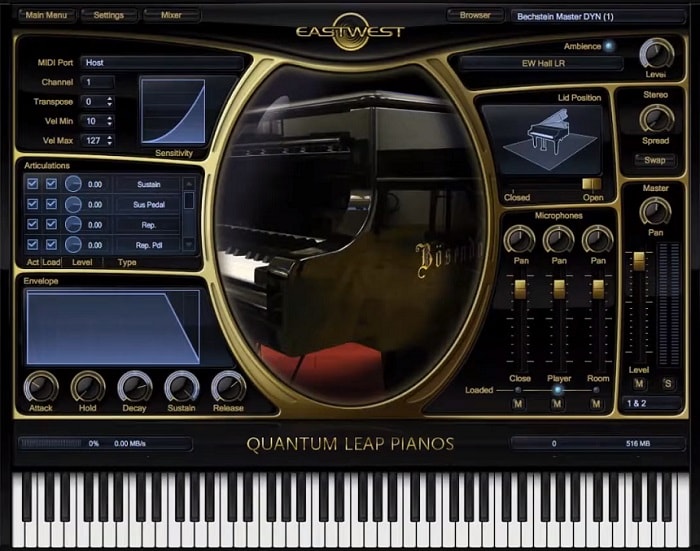 Here’s a demonstration of each of the pianos in EastWest Pianos Gold below along with a look at some of the features available:

The EWQL Pianos Gold is a straightforward piano plugin that features four great-sounding pianos. The interface and general experience feel a little outdated due to the age of this plugin, but overall, the sound is still going strong.

If you wish for tons of control and mixing possibilities, this plugin may not be for you as it focuses on remaining simple.

Furthermore, it requires about 60 GB of disk space, and the plugin eats a large amount of RAM. So, make sure your system is capable of handling it before purchase.

More Info & Price
A tight, bombastic, and dynamic brass section is inside this special plugin and will undoubtedly make your next track soar.

EastWest has been dedicated to continual innovation and excellent quality, setting the industry standard when it comes to sampling technology. Doug Rogers, the company’s founder and producer, has over 30 years of expertise in the audio industry and has won more industry honors than any other sound designer.

For more than 22 years, EastWest has dominated the sound industry thanks to its unwavering commitment to quality and inventive concepts.

Hollywood Pop Brass, just like their past Hollywood Brass libraries, condenses what a hit song should have if a horn section is needed: power, tightness, and brilliance.

There’s something for everyone in it – whether you want to build deep and detailed orchestrations with one of the world’s top horn sections or if you just want to “plug and play” using licks and phrases that will bring that “it” factor to your song, this is the ultimate pop brass sample library that will leave you begging for more. 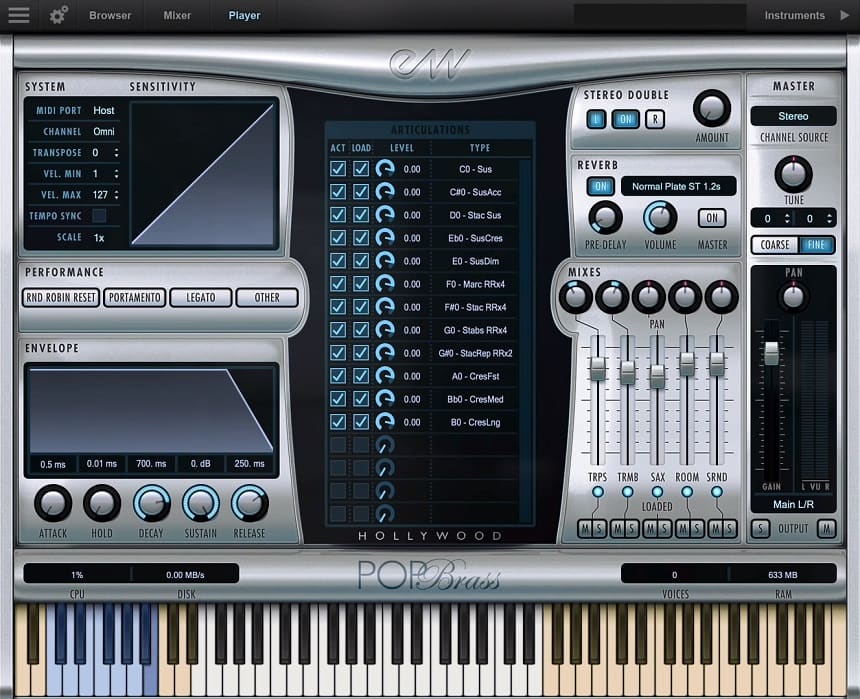 A brilliant software with equally brilliant configurations and effects that will greatly enhance your horn section’s sound. The team of developers behind this and other EastWest libraries is impressive, and the number of awards granted to each and for the Hollywood Pop Brass software itself is what really states its magnitude and excellence.

Although very complete, it’s somewhat strange that it doesn’t come in regular plugin formats or run in popular sample libraries – instead, it runs in its own player.

Spaces 2 is the sequel to the acclaimed Spaces convolution reverb by Eastwest Sounds. The many recorded samples featured in Spaces 2 can make any sound with the exact authenticity of a natural environment.

The high level of detail in Spaces 2 is astonishing; by selecting an exclusive instrument reflection, you can set the reverb to behave ideally according to the featured instrument. The plugin includes hundreds of environments, opera houses, catacombs, train stations; any producer will have a stunning palette of the reflective fields to choose from with Spaces 2.

Spaces 2 is a modern convolution reverb by Eastwest Sounds. The plugin is highly versatile in providing specific reverb for any track by featuring an instrument-specific preset dedicated to some orchestral instruments.

The many preset that the plugin offers are astounding; you can select from an extensive list of environments and ambients to emulate authentic early reflections and tail recordings for any audio. Some intuitive and handy knobs can be adjusted in the primary control with swiftness and precision to maximize further or regulate the mix’s reverberant glow.