Today we bring you some of the Best Passive Studio Monitors Available in 2022. As most of you may know, monitors are of the utmost importance when it comes to having a professional studio setup. They’re not only a set of speakers for listening to different tracks but also help sound engineers pinpoint how to improve a mix in terms of errors and frequency-based adjustments.

However, picking a set of monitors for your studio is no walk in the park. Remember, a sound engineer is only as good as his equipment. Therefore, when making this difficult decision, different aspects must be considered depending on the size of your studio, your level of expertise and your overall goal.

Firstly, studio monitors can be broadly divided into two categories: Active and Passive. Active monitors are self-sufficient in that they can generate their own power. On the other hand, passive speakers lack the technology for power generation and need to be paired with an amplifier to drive them.

Secondly, another aspect to consider is the setup size and the sound engineer’s preference. You may choose to have near-field, mid-field or far-field monitoring. Smaller setups require near-field speakers that give the best results when placed closer to the listener. Similarly, the other two sizes may be chosen if a larger setup is involved. 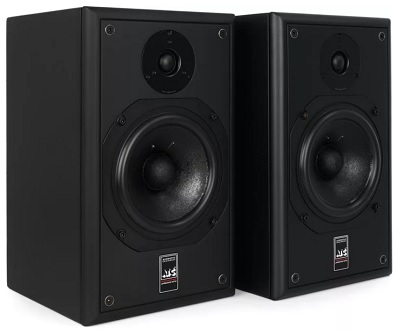 ATC has been dishing out high-end speaker systems since 1974.

The SCM12 Pro is one of the most affordable and compact offerings from the ATC company. The monitors were released back in 2016 and offer two-way monitoring capabilities. Being passive speakers, driving them through a powerful amp will bring the monitors’ impressive sound characteristics to the fore.

ATC have also introduced their dual mono amplifier called the P1 Pro alongside the SCM Pros to give sound engineers a one-stop solution for their home and professional studio setups. As these units complement each other very well, the amp and monitors can be purchased separately or in a value-added bundle.

The SCM12 Pro Monitors are deceptively small for the quality of sound and volume they can deliver. Capable of delivering an exceptional response along all frequency levels, the speakers can be a good addition to any small to medium-sized studio. The bass, in particular, sounds warm and profound, while the CLD design keeps rumbling and noise in check.

Although billed as the most affordable monitors from the ATC line, the SCM12 Pros are priced toward the expensive side. Since these are passive monitors, a high-end amplifier will be required to get the most out of them. In addition, the speakers tend to tilt a little more towards the bass frequencies.

The SCM12 Pro Monitors are nicely sized to sit on top of your workstation without taking up too much space. Feel free to choose these near-field studio monitors if you have a smaller setup, as they have just the right amount of juice to give you an exceptionally immersive experience. If you like a slight bass boost and good clarity in the mid and high-end, the SCM12s will surely impress you. 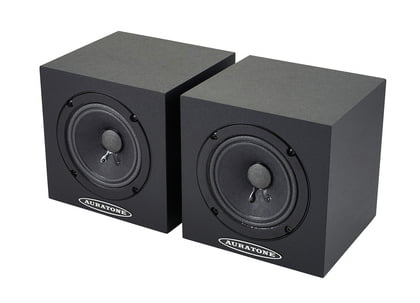 The Auratone 5C Monitors have been around since the 1960s.

Throughout the years, the appearance of the monitors may have changed slightly, but the technology inside has remained the same. Used by Quincy Jones while mixing the world-famous Thriller album by Michael Jackson, the monitors hold their own when it comes to delivering high-quality sound that is uncolored and accurate.

Strangely, there was a time when the 5Cs were discontinued and could only be found online on the secondhand market. Thankfully, the monitors have made a comeback and successfully replicate the features of their most sought-after version from the 1980s, much to the delight of sound engineers worldwide

Judging by its compact size and considerably lower price tag, the 5Cs pack quite a punch and perform beyond expectations. You’ll get great clarity among all frequency ranges with a high level of detail in the mid-range. In addition, the accuracy provided by the monitors will ensure that your mix sounds equally good on other sound systems.

Due to their diminutive size, driving them with a more powerful amp may add some distortion to your mix if it is packed with too much bass. The 5Cs are near-field monitors and are somewhat limited in terms of their volume. The stick-on base pads that come with the 5Cs seem low-quality and cheap.

Because of their slightly lower volume, the monitors are suitable for extended use in a near-field setting as there will be no ear fatigue issues. In addition, if you’re looking for detail in the middle frequencies and an accurate depiction of the mix as it was meant to be heard, be sure to give these a try. Also, any time-based effects applied to the mix will sound particularly good on the 5Cs. 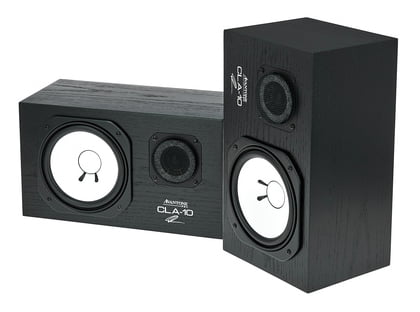 Dubbed the “white cone in the black box”, Avantone CLA-10s are a popular choice among many sound engineers.

The CLA-10s are a product of the collaboration between Avantone and Chris Lord Alge, a renowned sound engineering expert famous for mixing multiple mainstream albums. Chris has done several projects with artists like Tina Turner, Rob Zombie, Bruce Springsteen, the Rolling Stones, Green Day, and many more, so you know if Chris puts his seal of approval on something, it must be good.

Back when Yamaha’s NS10Ms got discontinued in early 2000, Avantone stepped up its game and came up with the modern representation of the old NS10Ms by delivering the CLA-10s. The Avantone monitors have had minor upgrades over the years in terms of design and appearance and are now available in more modern-looking packaging.

The Avantone CLA-10s provide great mid-tone clarity and detail. The horizontal orientation with tweeters on the outer edges provides a vivid stereo experience. The CLAs are ideal for near-field monitoring and provide a decent level of loudness for small to medium-level studio setups.

The bass on the CLA-10s is negligible. You may go back and forth between them and your high-end speakers to fix the bottom and treble frequencies, which can be a hassle for those looking for a complete solution setup. One obvious disadvantage of passive speakers is the added expense of an amp to drive them.

Choose the CLA-10s if you prefer a high level of clarity in the mid-range. The monitors can be a great tool in your mixing arsenal as getting the mid-ranges in your mix just right ensures that they will sound good on any other sound/speaker system. You can then move to your more high-end speakers and fix the highs and the lows. 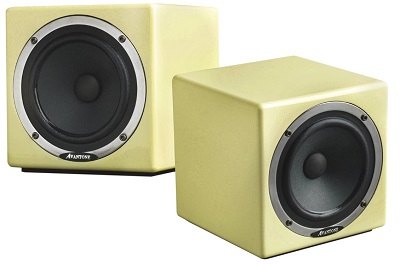 Avantone ventures into the world of cube speakers by releasing its own version, the MixCube.

The MixCube has a few different variants. They can be purchased as a pair or as a single unit depending on the requirement of your studio. Also, if you have an amp to drive the monitors, you can purchase the passive version or buy the active variant, which is self-sufficient in terms of power generation.

The MixCubes come in various colors, including Black, Red and Retro Cream. Unfortunately, as attractive as they may seem, the cubes have a love-hate relationship with most sound engineers. Some speak against them due to their limited response in recreating the highs and lows in a mix, while others praise them for their well-defined mids.

The MixCubes brutally expose the flaws in your mix. Also, if you need a good reference or guide about the levels of different tracks in your mix, the cubes will get you there in a hurry. These near-field monitors look aesthetically pleasing and don’t take up much space on your desktop.

MixCubes are not recommended as stand-alone monitors for your studio setup. While they shine in the mids, they lack a suitable bass and treble response. For this reason, you’ll be going back and forth between the cubes and other speaker systems to work out instruments that appear in these ranges, such as bass guitars and drums cymbals.

If your setup includes full spectrum monitors, then you can use the MixCubes as a second line of defense against the irregularities in your mix. In addition, the cubes will isolate the mid ranges so that you can make the necessary adjustments in your mix to sound good on low-end speakers like the ones found on portable devices or car stereos, for instance.

After going through today’s post, you have become familiar with some of the top passive monitoring systems and their different shapes, sizes and capabilities. By and large, all the brands on the list have a similar agenda and target audience. You now know you’ll need to invest in an amplifier to drive these passive monitors. Furthermore, most of these speakers deliver a profound mid-range but lack adequate treble and bass response. Pairing them with full spectrum speakers could be a good strategy since your main speakers can cover the deficiencies of these mid-dominant passive monitors. At the end of the day, it’s all a matter of preference.