In modern-day, enhancement effects come in many different types and functionalities, but one that stands out the most is the harmonic exciter.

Harmonic exciters are used by producers and audio engineers to add color and flavor when mixing instruments like pianos, guitars, leads, synths drums, and even bass to add more presence and clarity to your sound.  This is achieved by adding harmonic distortion.

In this article, we will explain what harmonic exciter is but also discuss and compare the features of the most commonly used Exciter plugins below.

How Does Harmonic Exciter Work?

Harmonic exciter uses harmonic synthesis to attack the rudimentary frequency signals in the recording and create higher-order harmonics from it. Since noise mostly comes from higher frequencies, the harmonics are obtained from a purer frequency band, thus giving us cleaner highs.

Exciters are not just limited to high frequencies. It can be used to add excitement across the whole frequency spectrum.

How & When To Use Harmonic Exciter?

As we said earlier, harmonic exciters are used by producers and audio engineers to add color and flavor when mixing instruments like pianos, guitars, leads, synths drums, and even bass to add more presence and clarity to your sound.

Using a standard EQ to achieve this often results in unnecessary noise and sibilance, so a harmonic exciter is a better choice. Additionally, Harmonic exciters are sometimes used on old recordings in order to clean it up and make it sound more redefined.

Harmonic exciters are generally used for mixing on an individual level. However, they can also be useful in mastering or post-production commonly for treating master tapes. Enhancing higher frequencies could help overcome the clarity loss in mass cassette duplication. Moreover, it can also be used to treat analog tape master, which has lost its higher frequencies due to aging or repeated playing over the years.

We made an updated article on the best exciter plugins, you can check it out here.

Though, here are some of them as well: 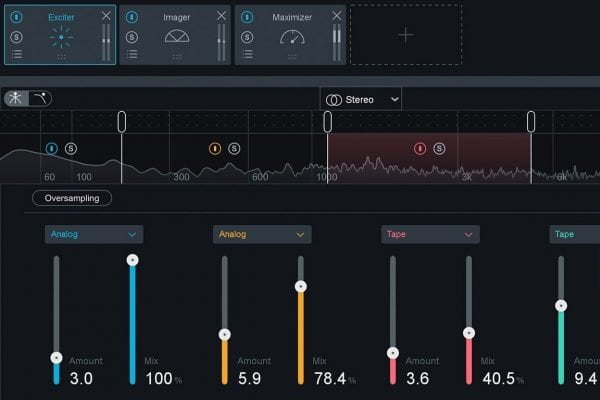 The Ozone exciter by Izotope is arguably the most commonly used exciter VST. This is mostly due to the circuit Triode and the Dual Triode modes or the updated Retro, Tape, Warm, or Tube modes that come equipped. These modes can be applied to each individual frequency band, making it a really useful tool to add variation and color to your track.

The interface of this plugin is user friendly. There are four frequency bands (low, mid-low, mid-high, and high), each with 2 control knobs, i.e. the amount control knob and the mix knob. Most of the time users will be applying excitation to the mid-high and high frequencies, though it would be a good idea to boost a little bit in the lower ends sometimes for a little extra flavor to the sound.

Ozone exciter also has an oversampling button which is used to increase the accuracy and the sound quality of the analog modeling in the harmonic exciter greatly. On powerful computers, this feature can be run in real-time. Else, it is best to use while exporting the track.

The plugin is also equipped with a bypass button. This is a useful tool since it allows the user to bypass the effect on individual frequencies in order to figure out what sections of the mix are being processed through each band.

This exciter plugin by Waves is modelled after an actual, physical exciter device that was introduced originally in the mid-70s. The Aphex exciter was an instant hit at that time, but it was quite expensive and rare to find. Today, Waves technology acquired the Aphex exciter and created a VST that replicates its sound almost exactly.

The user interface in the Waves Aphex is very different from the Ozone exciter. We have a mix1/mix2 mode that the user can choose from. The AX mix slider is to blend the desired amount of effect with the dry
signal. In addition to that, Aphex also has an AX mode. This is used when this effect is used on an aux bus, and there are tracks routed to it as “sends”. 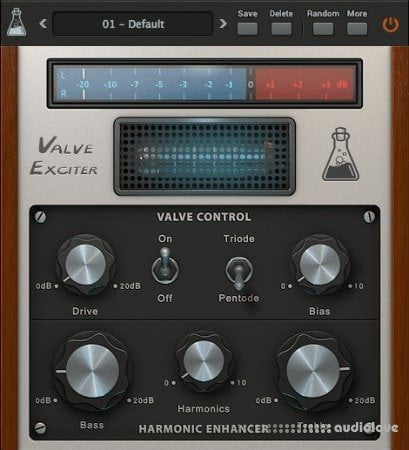 Valve Exciter is a harmonic exciter with a vintage valve emulation plugin by Audiothing. Much like its counterparts, the interface of this plugin, as well as the sound, is unique to it.

The valve section is designed to replicate a custom version of the vintage Telefunken ECC83 tubes.  This section comes with a drive knob, triode/pentode mode, and a bias settings knob. It also comes with an ON/OFF switch to enable/disable it.  The drive knob is used to add that “grind” and “grittiness” to the sound by eliminating some of the frequencies using pre-defined settings. Bias knob attempts to emulate the idle current sound that the original tube generates. This changes the tone of the sound. This is also the case for the triode/pentode switches. 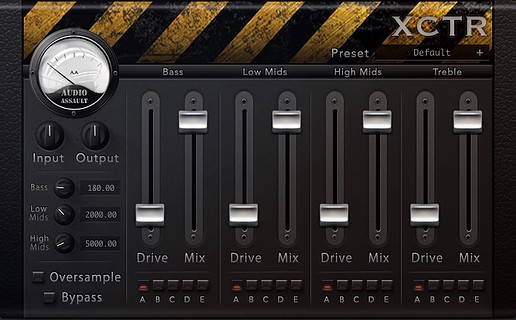 The Audio Assault plugin by XCTR to me does more than harmonic exciter. This is a full-on saturation plugin with multiple controllers for multiple functionalities. The XCTR, in a way, inhibits a feature from all the plugins we mentioned above.

Just like in the Aphex plugin, we have input/output with a peak meter section. In addition to input/output, we also have bass, low mids and high mids controllers in the same section. The bass knob is used to set the range of frequencies that will affect the bass saturation channel. The range of frequencies is from 22 Hz to 1 kHz. The same thing goes for the low mids and the high mids knobs. The range for the low mids knob is from 1 kHz to 4 kHz, whereas the range for high mids is from 4 kHz to 22 kHz. Much like the Ozone exciter, the XCTR also has an oversample and a bypass feature.

The 5 channel controllers are inspired by the analog flavors found in the Head Crusher, which is another plugin by Audio Assault. These plugins allow the user to independently add saturation to individual frequencies. The drive slider is a fader that controls how much of the effect is being added to our frequency. The mix slider controls how much of the driven saturation is mixed with the original dry signal of the track.

To wrap this up, Harmonic exciters are a great way to boost lead vocals and to add more flavor to a track by increasing individual frequencies without adding noise. Exciters have proven to be vital in the mixing and mastering process, and so they established a prominent position in the mix chain. There is a wide variety of exciter plugins in the market, each with different functionality, different sound, and different controls.

In this post, we discussed the most commonly used ones and compared them based on system compatibility, price and hardware requirement, and seen a very broad difference in terms of price particularly. While I personally use Ozone Exciter, I highly recommend trying out every plugin that was mentioned by downloading the free trials or demos in order to get the full picture as to how each plugin sounds and find out precisely what you need for your style.