Most of you may already be familiar with loudspeakers. There are many types of speakers in the market under different brands. When you’re purchasing a speaker,

But what Are the advantages of passive radiator design?

What Are The Benefits of Passive Radiator Design?

When we consider the active driver, it moves in higher amplitude when increasing the loudness. As a result, the chance of sound being distorted is getting higher. If a passive radiator is installed with the speaker cabinet, a portion of the movement of the active driver is isolated by the passive radiator driver. It allows the user to experience more loudness without distorting while enhancing the bass response.

It’s required a speaker driver of considerable size and is able to move in higher amplitude to produce a low frequency at a higher sound pressure level. For a small-scale sound device, practically, it’s not possible to include a large speaker driver.

Do You Need Music Amplifier For Studio Monitors or Studio Headphones?

Are Passive Radiators Better Than Ports?

The passive radiator is an effective solution for a speaker to increase efficiency, produce higher loudness without distorting. It may drop off the high-frequency response of the speaker. Reflex port speakers are not as efficient as passive radiators, but it’s economical.

If a speaker is tuned with a port properly, then it’s nothing to be worried about the frequency response.

Let’s take a look at reflex port technology. This is also a very similar concept to the passive radiator. As we already mentioned, a passive radiator is tuned to enhance the low-frequency response according to the manufacturer’s requirement.

But how is it tuned?

The air volume in the speaker cabinet is the key. By comparing the masses of the air inside and the passive radiator, it’s tuned.  In reflex port speakers, the air pressure and the length and the diameter of the port will decide the tune. This technology is fine for speakers of considerable size. The reason is that the port or the hole with a long tail may require some width or a length to achieve the expected enhancement. It’s a bit harder but less expensive than a passive radiator. 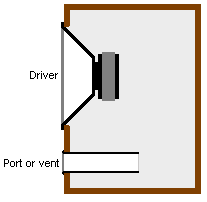 When it’s compared to both technologies, a passive radiator is an effective solution for a speaker to increase the efficiency, produce higher loudness without distorting. It may drop off the high-frequency response of the speaker. Reflex port speakers are not as efficient as passive radiators, but it’s economical. If a speaker is tuned with a port properly, then it’s nothing to be worried about the frequency response.

When a reflex port speaker functions at a considerable high loudness, the air circulation noise through the port may be heard and added some harmonics to the sound.

Therefore that’s not possible to state as “this one is better than this one.” Both are different technologies and appropriate for different situations, especially when comparing the budget, size of the speaker.

Most of the domestic and pro speaker manufacturers are using passive radiator technology on their products. Genelec HTS4B Home Theatre Subwoofer, Mackie HRmk2 professional studio monitor series, Amphion One, and Two series, Focal Shape series are a few of them.

If you observe the frequency response, power consumption, and sensitivity of these speakers, you will see what a passive radiator does.

Both speakers consist of two drivers to produce lower and higher frequencies. The overall power consumption of the speakers is 110W. Maximum SPL is the most interesting parameter to compare and identify. It’s 106dB for Alpha 65 and 109dB for Shape 65.

Just an increment of 3dB. Right?. “Is this a small increment?”. If you have an understanding of how the Sound Pressure Level varies, you will get the idea in a few seconds. I’ll explain.

There’s a mathematically and practically proven theory in point-source sound system as “Doubling the acoustical power of the source will increase the Sound Pressure Level in 3dB.”

“What does that mean?” If we play some music with one speaker at some level of loudness and measure the SPL, then add another speaker with the same loudness, placed together, and measure the SPL again, the increment of the SPL will be 3dB.

By applying this concept and comparing the Alpha 65 and Shape 65, you’ll realize that the Shape 65 can produce a loudness of 2 Alpha 65 speakers by consuming the same power.

When comparing the prices of both two speakers, Shape 65 is much more expensive than Alpha 65.

Here are a few main factors to be considered before you buy:

Therefore it’s very important to manage these factors during the manufacturing of a speaker. As most of you know, a speaker working as a transducer converts an electrical signal into an acoustical signal with the help of a magnet and a voice coil (Faraday’s Law of induction). During this process, the speaker cones moving forward and backward to transfer the energy to the air particles around the speaker.

As a result, air pressure is built up inside the speaker cabinet, which is unavoidable. The concepts of reflex port and passive radiator comes into play at this point.

The reflex port uses a hole like a cylinder in the cabinet to manage and enhance the low-frequency response with the pressure buildup inside the cabinet. This is the most commonly seen technology in most speakers. Passive radiators are a bit different. There are no holes in passive radiators, but a tuned air volume and a diaphragm with a suspension system similar to a speaker cone without a voice coil or any electrical or magnetic component are included.

It moves with the pressure inside the cabinet and converts the inside pressure into sound while enhancing the bass response. Why the bass response? Since the high frequencies take less time to complete a cycle of simple harmonic motion, air particles will move faster than a low frequency.

Therefore the energy will be damped within a few cycles inside the speaker cabinet and containing not enough energy to move the passive reflector. In the bass or low-frequency region, a small amount of movement of the active driver can move the passive reflector with a considerable amplitude. Therefore it’s a very effective approach to enhance the low-frequency response of a small speaker system.

We can state that both speaker technologies are very useful in different situations. Reflex port design is economical, and the Passive radiator design is efficient.