In this post, we will closely examine the top 7 harmonizer plugins and their features in detail.

What Does Harmonizer Mean?

In music, the combination of multiple notes playing simultaneously is called harmony. The simplest example of harmony is a chord, where you have the root note being accompanied with other notes on a given scale to make it more exciting.

That is: you have one voice, which is the root, and you add more voices to it, which are the other notes. Note that ‘voices’ in harmonizer language aren’t meaning ACTUAL voices or vocals. Even though harmonizers are mainly used in vocals, they can be used with other audio signals, as you’ll see later on in this article.

How Does a Harmonizer Work?

Harmonizer will give you a method of audio input that can be real-time or processed. As you get your audio signal going through the Harmonizer, you’ll be given a set of parameters that allow you to create harmony. The engine will duplicate your signal, and you’ll change that signal’s pitch.

Depending on the chosen Harmonizer, you’ll be able to multiply that signal a lot of times, creating a big choral sound. A few harmonizers allow you to input chords via MIDI, much like a vocoder would work. That way, you wouldn’t be locked into the Harmonizer’s parameters and would be able to change chords live, either with a midi keyboard controller or with your DAW’s piano roll. But for now, let’s take a look at.. 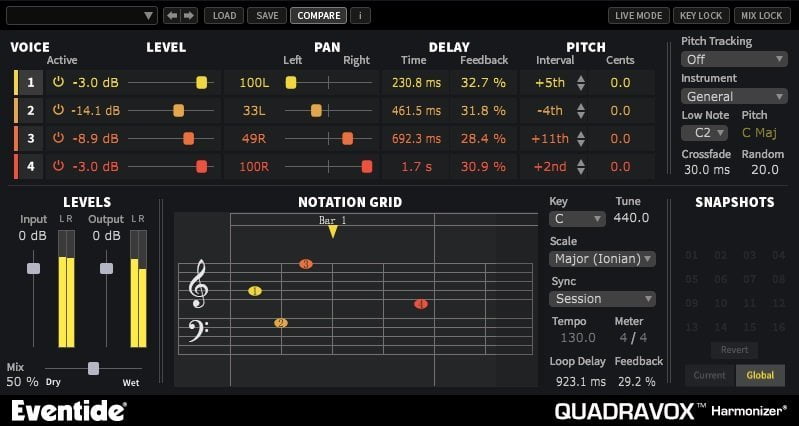 Eventide’s Quadravox is a time-based harmonizer that features four vocals to play with.

Each voice has precise controls to place them in terms of level, pan, pitch, and time. You can lock those to the key using the Key Lock button or leave them free to some unusual combinations. The same applies to the tempo, which can be synced with your DAW, or following your parameters.

What makes Quadravox unique is the Notation Grid, where you activate the voices, they appear as dots on the grid (staff), and you move them where you want to create your harmonies. Note that you don’t need to know how to read music to mess with the grid.

You’re not limited to only using the plugin with vocals, as Quadravox can handle instruments going through it. You can have guitar, bass, and even your drums can work with it. Any audio input can work with it but don’t forget to change the Instrument settings as you change the input, so you have a better result.

The plugin comes packed with over 60 presets that can get you going when exploring what it can do but also gives you a good starting point.

Quadravox requires Windows 8+, and it’s available as AAX, VST2, and VST3 in both 32/64 bit. Also, macOS 10.9+ supports but only 64bit AAX, AU, VST2, and VST3 versions. Note that new 32bit macOS installers are no longer being made for this product.

Eventide has a name for its quality products, and Quadravox has what you would expect from them. A sleek interface with precise controls makes it easier to navigate and get amazing sounds from it. The huge amount of presets gets you going if you want a quick sound or want to explore what Quadravox can do before you dive into it.

The effect is easy to learn and quick to use; with a few minutes of tweaking knobs, you’ll be able to understand it and start applying it to your production. 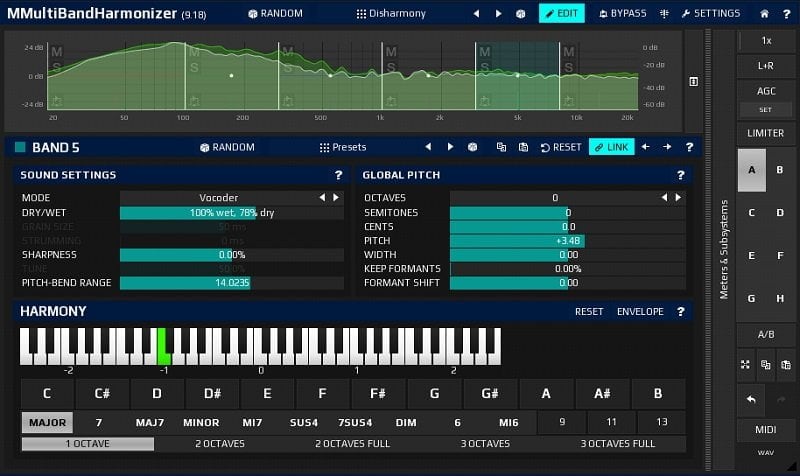 MeldaProduction’s MHarmonizerMB is a multiband harmonizer that brings you six bands of possibility for creating complex harmonies.

As you open the plugin, you’ll be presented with a basic set of controls and pre-made patches that are the common use of harmonizers, like pitch shifter and octaves.

First, you set the crossover frequencies and their types for each band. Each crossover has nine types, including Analog, Mid/Side, and Linear-Phase. As you choose a crossover type, you have a set of parameters to shape it the way you want. You can adjust the slope, level, transients, and other special parameters. The parameters you’ll be able to adjust will depend on the crossover you choose.

After choosing the crossovers, it’s time to go to your band panel. Each band has its own set of parameters to make each unique. Each has 4 modes and options like strumming, so your vocals can sound like guitars – kind of. Modulators are the natural next step after this.

MHarmonizerMB supports VST, VST3, AU and AAX on Windows Vista+ (both 32-bit and 64-bit) & macOS 10.9+ (64-bit only). Linux is not directly supported, but it is possible to run the plugins via Wine.

MeldaProduction is known for its amazing products at a cheap cost (even a lot of free ones) with expensive quality. MHarmonizerMB is a complete package as far as what you can do in terms of harmonizing. The fact you can modulate almost every parameter inside the plugin, even the crossovers, shows how much you can get with it. 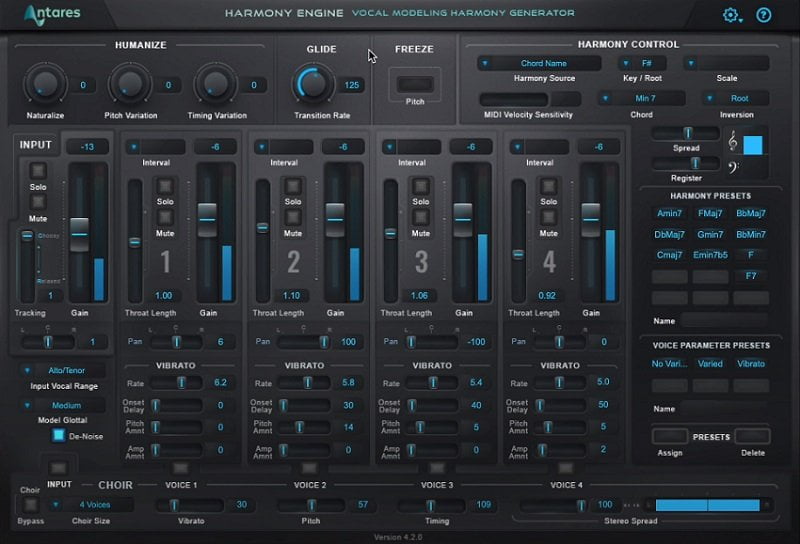 Antares has been in the music business for years and is the creator of the popular Auto-Tune correction tool.

The Harmony Engine is dubbed as a cutting edge amongst other audio tools as it utilizes automatic and physical control settings. However, it is the ease and convenience that stems from creating multiple harmonies with only one vocal file that gives the harmony engine its place on this list as one of the best audio plugins in the market today.

Plus, it is user-friendly, and irrespective of if you’re a professional vocalist, an amateur, or a newbie, the harmony engine is structurally designed to accommodate everyone.

Harmony Engine offers a simple interface for new and informed users coupled with a huge amount of flexibility. With four distinct harmony voices, multiple flexibility controls, and vocal multipliers, Harmony Engine spared no effort in ensuring its users had the best tools to produce any song of their choice.

We couldn’t leave the world’s first digital effects processor out of this list, right?

Eventide’s H910 Harmonizer is a legendary piece that recreates the original H910 analog processor in every way possible, even the random glitches the hardware got, they recreated.

Before the ’70s, digital processors weren’t a thing. Studios were filled with analog until 1971 when the DDL (Digital Line Delay) appeared. Processors from Eventide and Lexicon served as the basis for H910 in its development. Even though it was the first digital processor, only the delay was digital; the rest was analog, which is why it sounded so analog.

The H910 Harmonizer is straightforward to use. You have your regular Input and Feedback knobs. While the original only had a glide knob and three selectors, the digital version has an envelope, dry/wet, output levels, and a hold button, so it gets a little sustain time.

Not much needs to be said about this legend. Simple and powerful, the H910 Harmonizer gives you the analog sound a lot of people know and love. The fact that they gave attention to recreating the glitches the original had shows that it’s an actual faithful digital model. Anyone who’s looking for a warm, nostalgic harmonizer sound should take a look at this one. 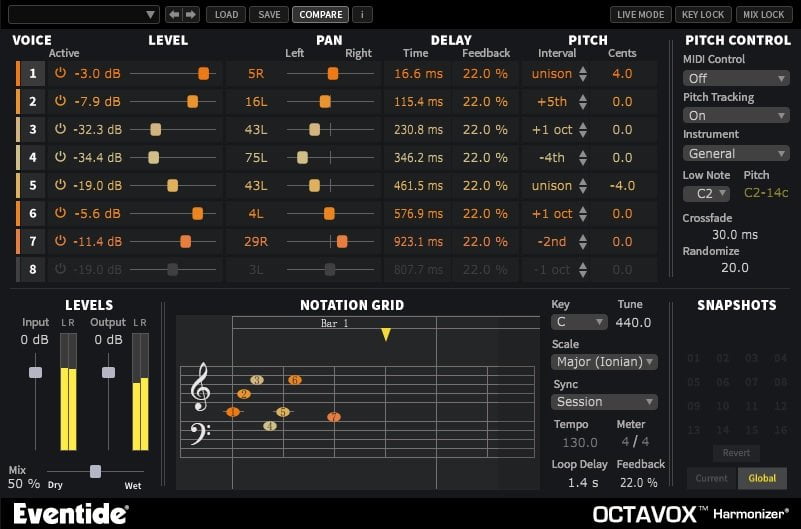 The idea behind Octavox is based on the technological innovation of the iconic H8000 hardware processor.

It comes with controls intuitively designed to make you seamlessly adjust its parameters and type in your preferred values. You can be a guitarist, musician, or anything musical-related and still have fun with the Octavox. That’s how dynamic it is.

If taking your music up a notch, from good to amazing is what you’re after, then you can’t go wrong with octavox. It is a unique musical tool that transforms any incoming rhythm no matter the complexity into 8 special voices based on the chosen key and timing interval. 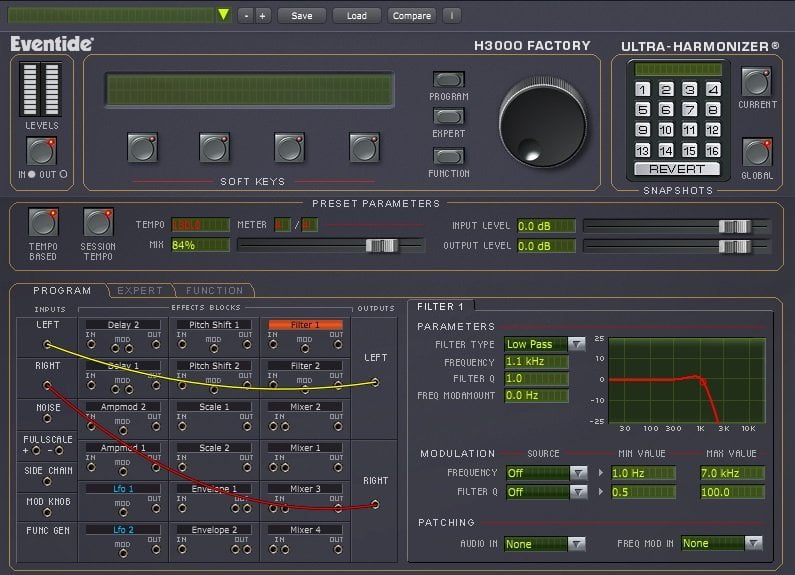 Being another Eventide legend in this list, the H3000 Factory is the software version of the legendary H3000 Harmonizer.

Recreating some of the algorithms from the original outboard processor, the H3000 Factory is a modular type effect.

The front panel, which is always on the top, is faithful modeling of the original device. The iconic calculator-like snapshots section is included and ready to store 16 presets to pull up whenever you need.

The H3000 Factory is a versatile sound design tool. You have a lot of control over every parameter. You can fine-tune every setting precisely. The amount of possibilities makes it stand out from the other options. It gives you the reliability of a piece of equipment that is available at almost every major recording studio for almost 30 years. 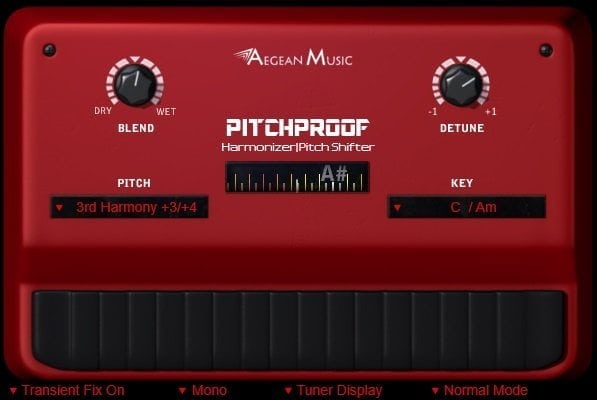 Simple to use but powerful. Its interface is based on guitar pedals, as it simulates pitch-shifting guitar pedals. The main idea of Pitchproof is blending old styles of pitch shifting with modern technology.

You have two knobs: Blend, which is a dry/wet knob, and Detune, which is exactly what you thought! In the pitch menu, you can select +/- semitones or harmonies, which are “intelligent pitch effects,” according to Aegean.

A little detail they added to the plugin, and it’s convenient; it’s a tuner!

Pitchproof is available for Windows 32 and 64bit as VST and AAX, and Mac as VST, AU, and AAX. The versions are not specified by Aegean Music.

Pitchproof is the best option you can get if you want a really simple plugin, at no cost, that’s gonna do the job flawlessly. All the controls you need are there, ready to use. It may appeal more to guitar players and pedal enthusiasts, but it’s worth trying if you’re not a part of those groups.

Harmonizers are fun and can be a really powerful sound design tool. If you want a different effect on your vocals, it will work perfectly, but if you expand its usages to instruments, drums, and even with your soft synths, it might get some unique results.

An H910 will give you a nostalgic sound with an analog rendition, but Pitchproof will be a quick solution to a simple task.

Overall, all of them have the basics nailed down; you only need to look at their unique attributes and choose. And I don’t think you’ll make a bad decision trying some of them!