This article will discuss if and when you should sidechain vocals.

Sidechain is a music production procedure in which you activate a particular effect on a signal only when another signal triggers it. Most commonly, sidechaining is set on a compressor. For example, for the kick to cut through the mix and not be masked by the bass or 808, producers often set up a compressor on the bass that acts only when the kick plays.

Should I Sidechain Vocals & When?

It’s not always necessary to sidechain vocals unless the mix is too dense for the vocals to cut through, in which case you can sidechain the vocals to the guitars, synths, drums, or whatever element(s) in the mix is/are masking the vocals. Vocals are dynamic, and the problem lies in parts in which the vocals are soft.

It’s good to sidechain softer vocals to the entire track, synths, or guitars bus but let’s understand the issue more deeply. The fundamental frequency of vocals typically lies between 100 and 700 Hz, depending on whether the vocalist is a soprano, an alto, a tenor, etc. Typically male vocalists’ fundamentals are between 100 and 300 Hz, and between 200 and 400 Hz for female vocalists.

Instruments that are most likely to fight with the vocals are snare drums, guitars, pianos, synthesizers, cellos, etc. Any instrument or percussion which lies in the same frequency range as the vocals may mask the vocals.

Typically, in punk rock, metal, and other heavy rock genres, the vocals must be sidechained to the guitars, as the driven and distorted guitars take up a lot of energy in the mix and may mask the vocals.

In an EDM mix with a lot of sawtooth or other synth content, the synths may take over the vocals; hence, it’s a good idea to sidechain vocals to the synths, such that the synths duck down every time the vocals are played. Similarly, modern hip-hop, including drill and trap, have heavy 808s that lie in the mid-range and could clash with the vocals,

So you can consider sidechaining vocals to heavy 808 tracks. Likewise, you can sidechain vocals to the drill genre’s busy and heavy snare rolls and patterns. Similarly, dubstep and bass genres may have a similar problem.

Also, effects like reverb, delay, etc., may interfere with the vocals. Lastly, you can also sidechain the lead vocals to the backing vocals, so they don’t clash. So you can create sidechain effects on them as well. The point is that you can sidechain the vocals with whatever fights them. Apart from that, you can also use vocal sidechaining creatively to create musical effects.

How do I sidechain vocals?

After enabling sidechaining, adjust the compressor and its parameters per your tastes, likings, and needs. That will ensure that the instrument/element ducks down every time the vocals are played. In our example, we will set up the sidechain compression effect on FL Studio, but you can follow the same steps in your DAW.

We will sidechain the vocals with a clashing synth. So if you’re using FL Studio, ensure that the tracks go to the mixer channel. You can route the tracks by opening their samplers and selecting their insert channels by adjusting the “TRACK” value on the sampler. You can do that by clicking on it and scrolling until you find the insert number to which you want to route the audio. 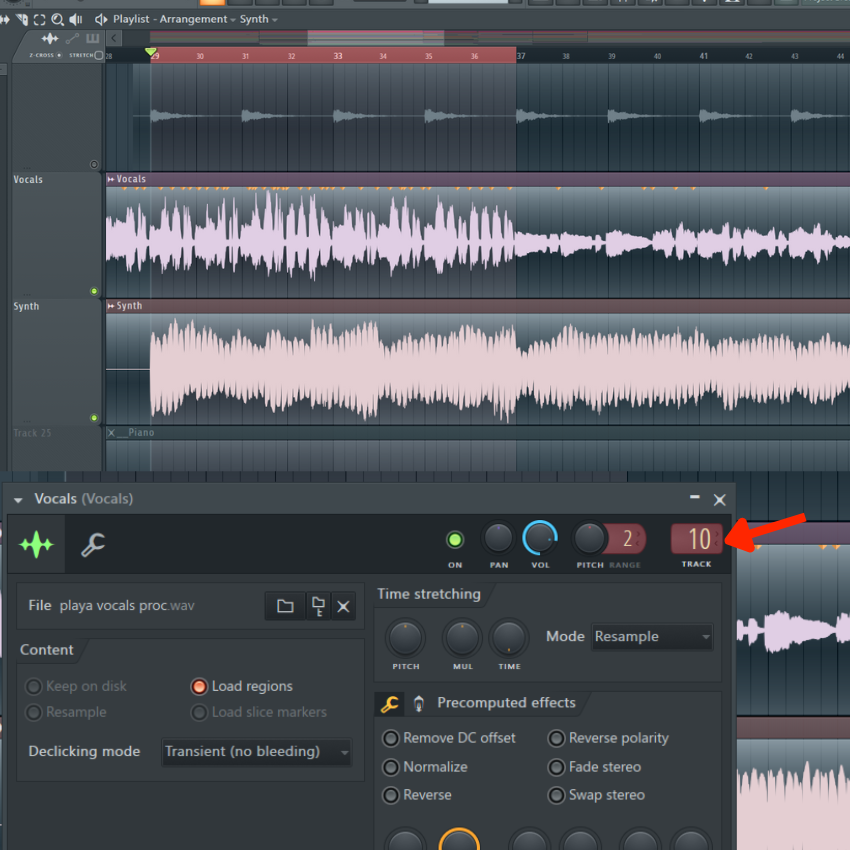 Next, open the mixer channel by clicking on the mixer icon, as shown in the image. 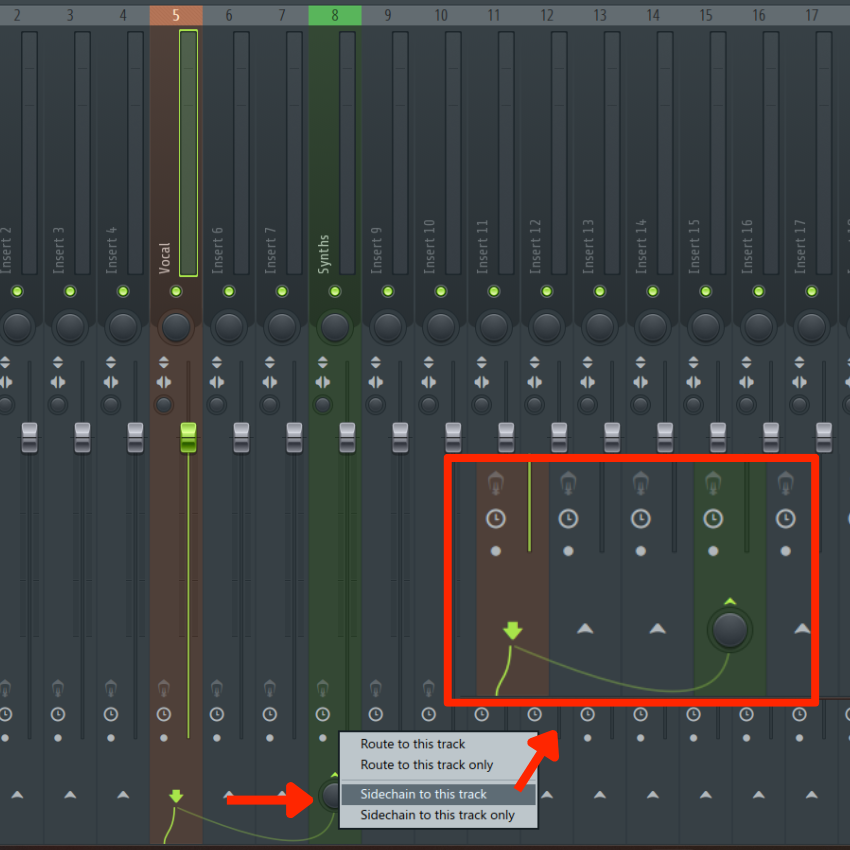 Next, load up a compressor plugin on the synths track. I will use the Fruity Limiter, but you can choose any compressor with a sidechain feature. On the Fruity Limiter, open the “COMP” (compressor) tab, and fill the value “1” in “SIDECHAIN” by clicking on it and scrolling by a single unit if the vocal is the only or the first element sidechained to it.

If the vocal is the second element, you sidechained to it, scroll up to “2”, and so on… 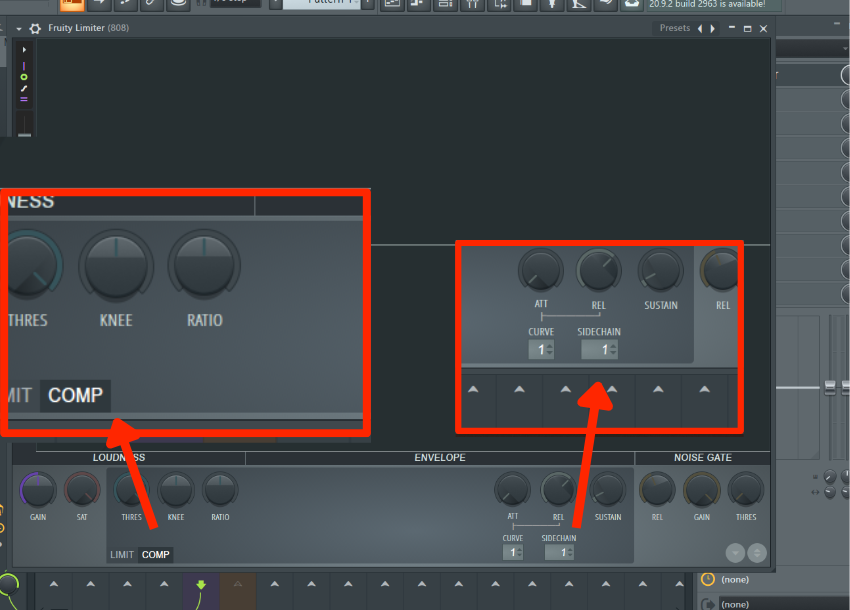 Next, adjust the compressor parameters like Ratio, Threshold, etc., and your sidechain compression is set up. Just ensure that you do not apply any makeup gain on the compressor. You can follow the same steps to sidechain the vocals with any other instrument/element.

Given the dynamic range of vocals and their performance, a sidechain is a reliable tool for making vocals cut through and stand out. In typical pop-rock and hip-hop productions, vocals stand on the top and are generally one of the loudest elements in the mix.

Also, they lie in a vulnerable frequency range and are likely to be masked by other elements. However, these tools are great for that. Instead of sidechain compression, you can also use automation of plugins like distortion, compression, etc., and their parameters. You can also do volume automation.

If not that, there are tools, like Vocal Rider by Waves, that deal with the dynamic range of the vocals. Further, a more accurate but complicated way to make the vocals stand out is to use a sidechain on a multi-band compressor, as that will allow you to set up sidechain compression of different types and styles on different frequency ranges.