There are FarField, MidField & NearField monitors in the market today. Understanding their capabilities and uses will help you make informed decisions when choosing the best studio monitors for your music production needs.

These types of monitors are small enough to sit on a stand or desk close to the listener. They’re specifically designed for listening to close distances so that the greater proportion of direct sound goes directly to the listener rather than reflecting off walls and ceilings. 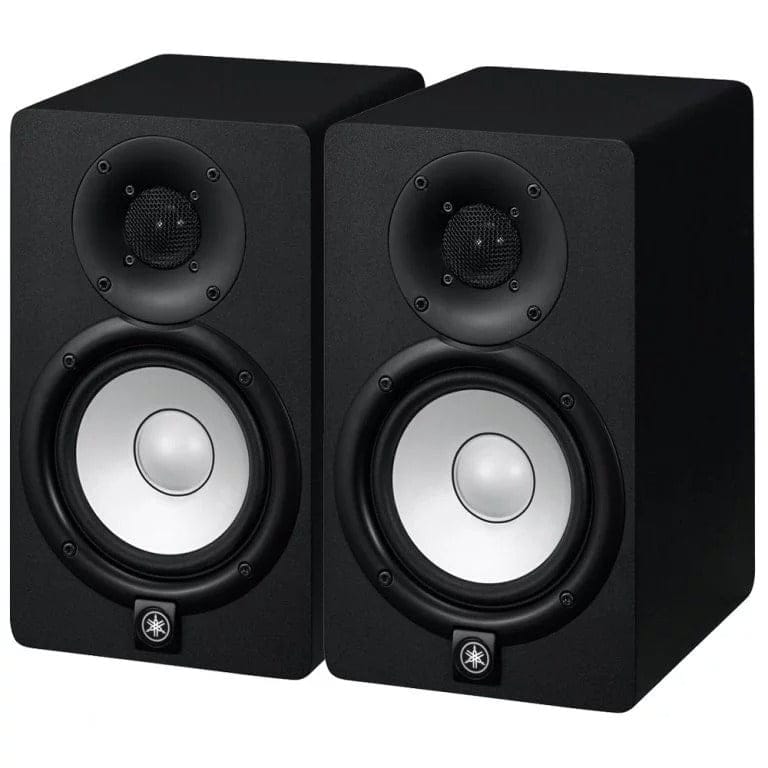 It is commonly used in the recording studio to position the microphones and the voice in the mix. They’re a favorite for home and small studios as they are cost-effective and versatile.

Pros and Cons of NearField Monitors

Do You Need Music Amplifier For Studio Monitors or Studio Headphones?

Pros and Cons of MidField Monitors

Their larger drivers and more powerful drivers enable them to fill larger studio rooms with a higher quality of sounds than near-field monitors and be positioned further away from the listener without degradation of sound quality.

Due to their more extensive monitoring capabilities; it’s higher volume and better bass extension. They’re prone to exaggerate the room ‘modes’ which are the acoustical cancellations and reinforcements at various bass frequencies which are usually related to a room’s dimensions resulting in inaccurate readings.

Pros and Cons of FarField Monitors

Far fields are deployed in large studio rooms and usually take advantage of the room acoustics to impact the sound. They use the entire scope of the studio room, and this allows for the development of lower frequencies to be heard smoothly.

Technical aspects differ from each of the studio monitors available in the market. They include the following:

The technical aspects of studio monitors are discussed below in detail:

Dynamic range is among the most critical aspects of a good mixing process. A Dynamic range is that difference between the largest and smallest point of an audio signal in a frequency graph produced by the audio monitor.

A must track has the following datasets;

The image below illustrates this example: 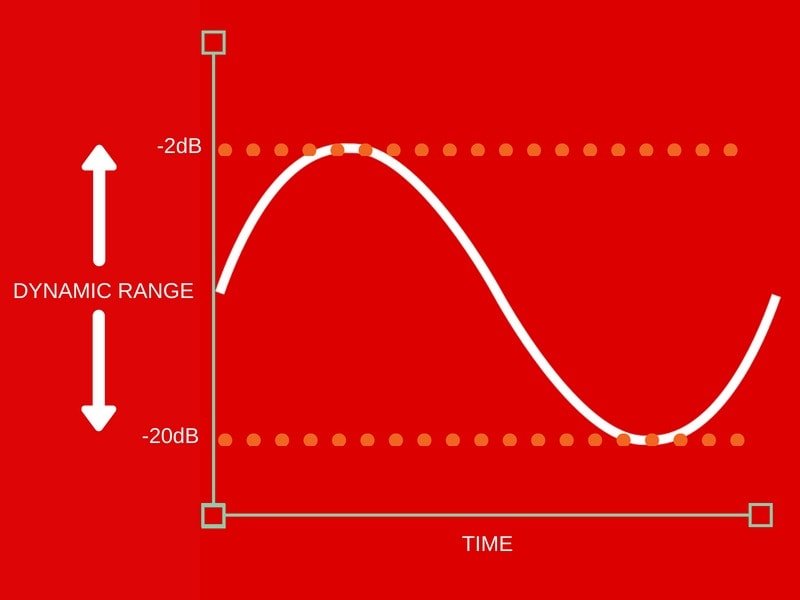 Their dynamic range is usually low, which is quite ideal for large studios but not ideal for small studios where space is limited.

Mid-field studio monitors aren’t optimized for mixing. Their drivers and tweeters can be regarded as average when it comes to mixing but not ideal if you’re looking out for professionally done work.

The headroom is that reserve or extra decibels (dB) above the recommended or nominal signal handling level also called a safety zone that allows transient audio peaks to exceed that recommended single level without damaging the speakers. 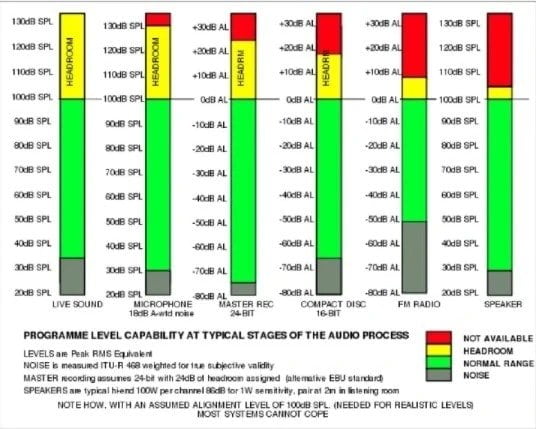 All studio monitors types are equipped with enough headroom, therefore providing a decent allowance for music producers to push their systems a little bit further when necessary for short periods to achieve desired effects.

Frequency response is the range of audible frequencies a speaker can reproduce between 20 Hz (deep bass) and 20 kHz (piercingly high frequency) which is considered the range of human hearing.  Usually, our hearing doesn’t extend up to 20 kHz, especially when we get older, and bass frequencies below 30Hz are mostly felt than heard.

Near-field studio monitors aren’t able to produce sounds below 45 dB, and that’s making them ideal for mixing of music production.

Far-Field studio monitors can produce sounds as low as 15 HZ, an audible range lower than what the human ear can hear, making them ideal for film studios.

Near-field studio monitors are optimized to operate at lower mid to higher mid-range of 600 Hz to 3500 Hz depending on the driver and make of the studio monitor.

Mid-field studio monitors such as the LYD 48 from the LYD series have a crossover frequency of 460Hz to 5500KHZ. They have received rave reviews from many music producers who state that the studio monitors provide unmatched accuracy at any volume level.

Far-field studio monitors are also active at the same frequency range as near-field studios but have a secondary crossover frequency at the low range of 100 Hz to 600 Hz. Far-field monitors have a certain amount of bass, which is usually not ideal for mixing but very important in film scoring.

Wattage refers to the amount of electrical power expressed in watts. It determines the volume, dynamic range, and sound of your studio monitor. The rule of the thumb is the higher the wattage, the better chances you have of hearing better sounds.

Near-field studio monitors have small drivers; therefore only require minimal power to operate. Their wattage requirements are between 15W and 100W. 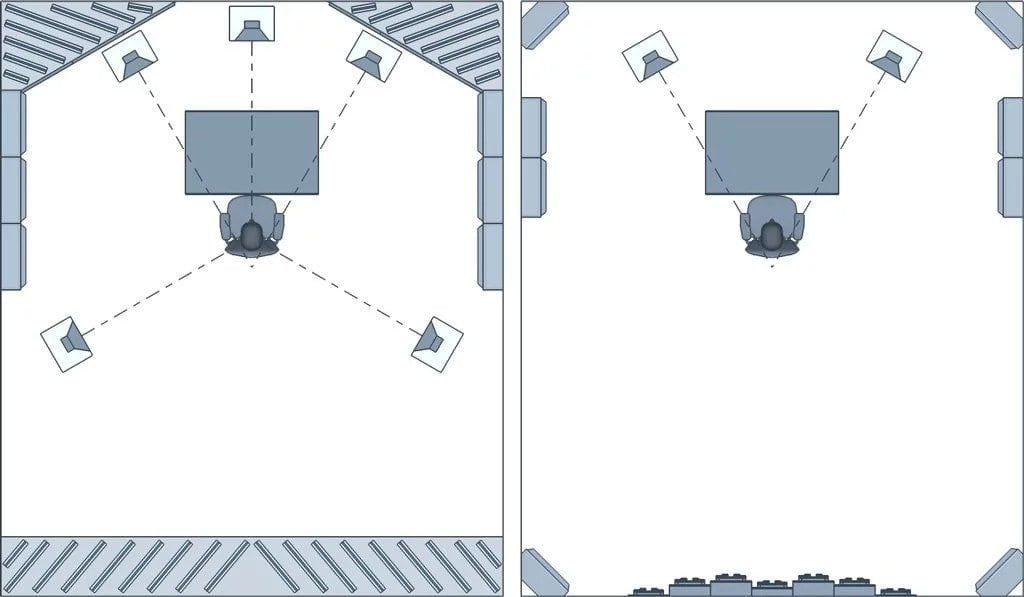 The ideal placement is between 3 and 5 feet away from the listener. The speakers and the listener’s head are placed on an equilateral triangle, which enables the reduction of poor room acoustics.

They generally have larger drivers and are usually placed along the perimeter of the studio room and a distance of around 10 feet away from the listener. They’re usually mounted on a stand or the wall behind the mixing desk. They take advantage of room acoustics to offer a more holistic listening experience.

They are typically placed within 2 and 4 meters away from the listener.

Factors to consider when buying a studio monitor

A home studio cannot be complete without a pair of studio monitors. Here are a few basic guidelines that will provide you with the necessary knowledge to assist you in narrowing down your selection. 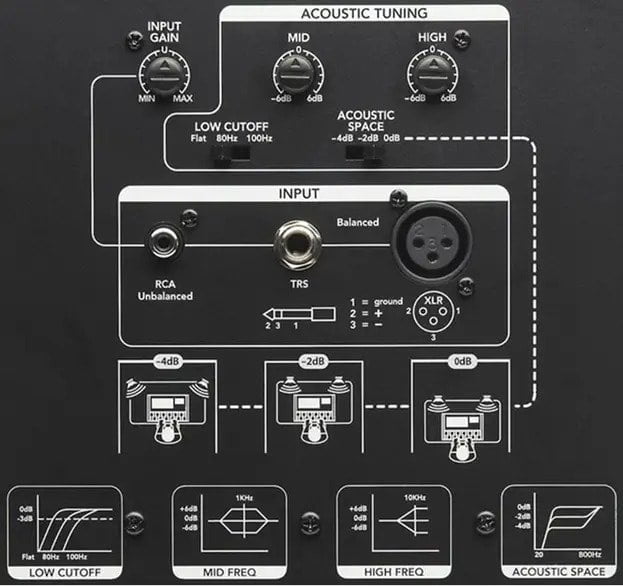