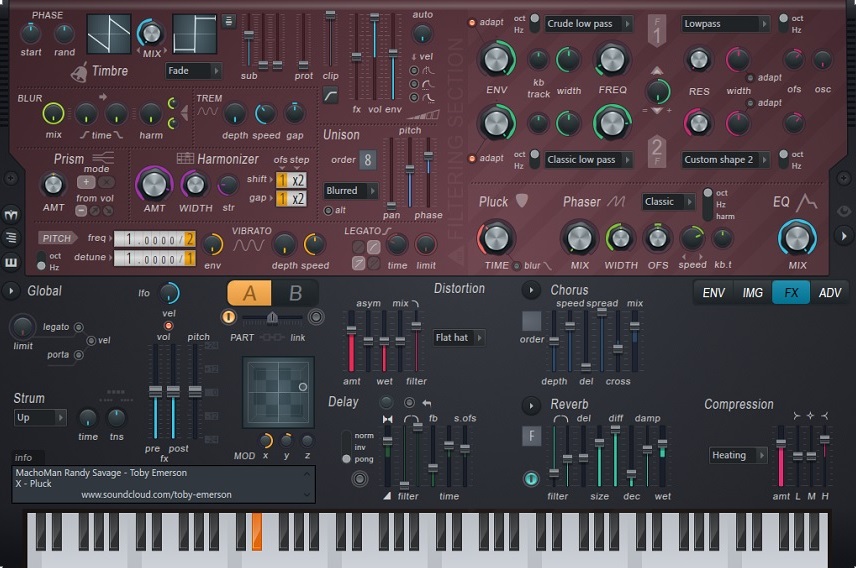 Harmor by Image Line is an additive/subtractive synthesizer, with subtractive features like the filter also taking an additive approach.

Hence, to summarise the sound design process, you can build up your sounds from basic waveshape (like sine, sawtooth, etc.) and add harmonics to it, after which you can take the subtractive approach to subtract unwanted sonic properties from the sound.

Since you can add harmonics and harmonies to the waveform selected in the first step, hence the name – Harmor. However, this instrument’s unconventional design, layout, and terminologies may make you scratch your head at first and read its manual, but it will give you plenty of inspiration. So first, let’s look at the key features of the software.

Unfortunately, Harmor is written in Delphi and is not available on Mac. However, it can work on Mac and Windows if you use it on FL Studio. Though, Harmor is not a standalone plugin and can only be used on FL Studio, with general FL Studio CPU requirements.

When it comes to generating pluck sounds, Harmor is a great choice. It  has a unique additive synthesis approach with its interesting subtractive synthesis blend. However, the plugin may appear all over the place because of its complex arrangement and design.

It doesn’t function like other synthesizers but has a huge fan base because of its interesting sets of presets and functionalities. For example, that includes effects like blur, prism, harmonize, tremolo, etc., which may look unfamiliar but are great tools to shape your sound and give them a unique texture.

A straightforward voice manipulation tool that will bring that characteristic “robot quality” to your voice, as simple as possible.

Image Line developed an interesting version of the vocoder effect, with easy controls and an insightful interface that can help you better visualize what’s going on with your audio signal. All effects and tweaks are present here, and although some knobs might not be as intuitive as in other plugins, it’s fairly easy to get around after a few minutes of using it.

Vocodex controls the frequency band activity of another synthesized sound by examining the actual frequency band of your audio input and using it as a modulator. It then filters out the synthetic sound frequencies that aren’t present in the voice sound with a sequence of narrow-band frequency gates.

The result is a vocoder effect similar to that of a “talking synthesizer.” 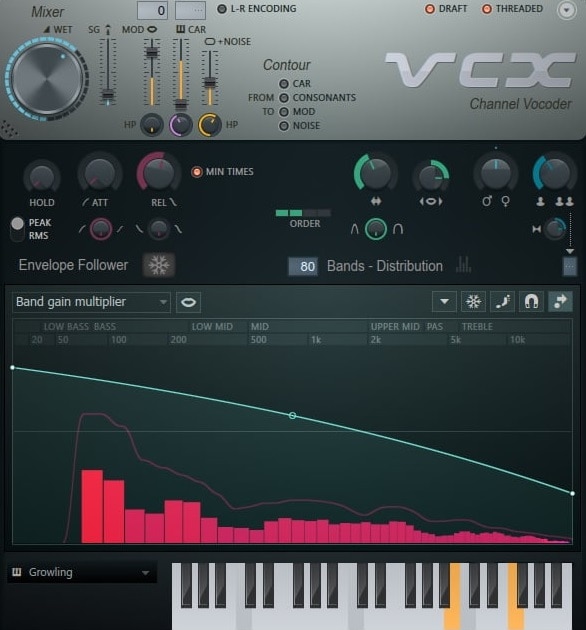 This plugin runs only in Windows XP or higher, both in 32 and 64-bit options. It comes in VST plugin format.

This simple-to-use plugin offers the popular controls for getting the perfect “robot voice” vibe your track deserves. The overall design interface might not be as intuitive as other options, but the straightforward controls help ease things up by delivering instant results without many clicks or tweaks.

Considering it’s a lightweight plugin, producers with slower CPUs might take advantage of this software without giving up the sound quality. Apple users can’t get to use this, but gladly there are other plugins that can do the same as this option and also run on Mac computers. 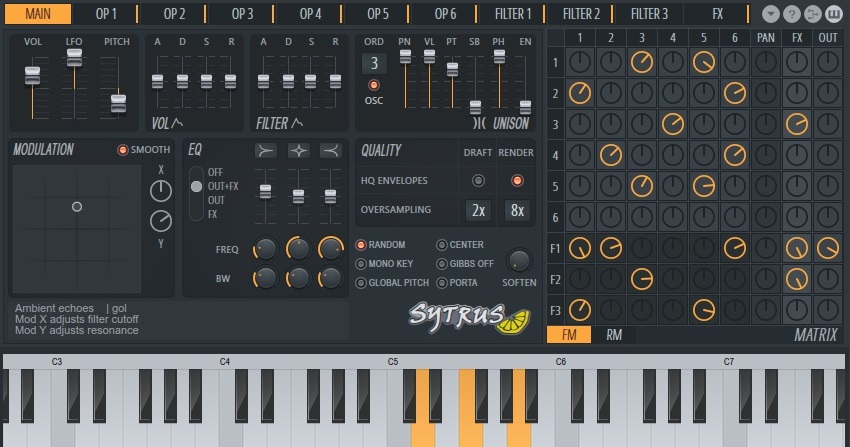 Sytrus by Image Line is an interesting sound design plugin that combines subtractive synthesis with Frequency Modulation and Ring Modulation in a very analog style Matrix.

The MATRIX window could be used to create signal flows according to your needs. With six operators, three filters, and a create effects section, one can create some innovative sounds with this synthesizer.

It’s a powerful synthesizer capable of performing subtractive, additive, FM, and RM synthesis, with a huge palette of sounds and a versatile collection of presets, with categories like Arp, bass, brass, pads, strings, etc.

Sytrus Tutorial - Everything You Need to Know

Sytrus has endless possibilities and is a go-to soft-synth for many FL Studio users. You can hear its presets on much common pop and dance music. Its unique and simplified interface and versatility in producing sounds of different genres and moods make it special.

It may not be the best plugin in the modern day, but it’s still a pretty good tool. 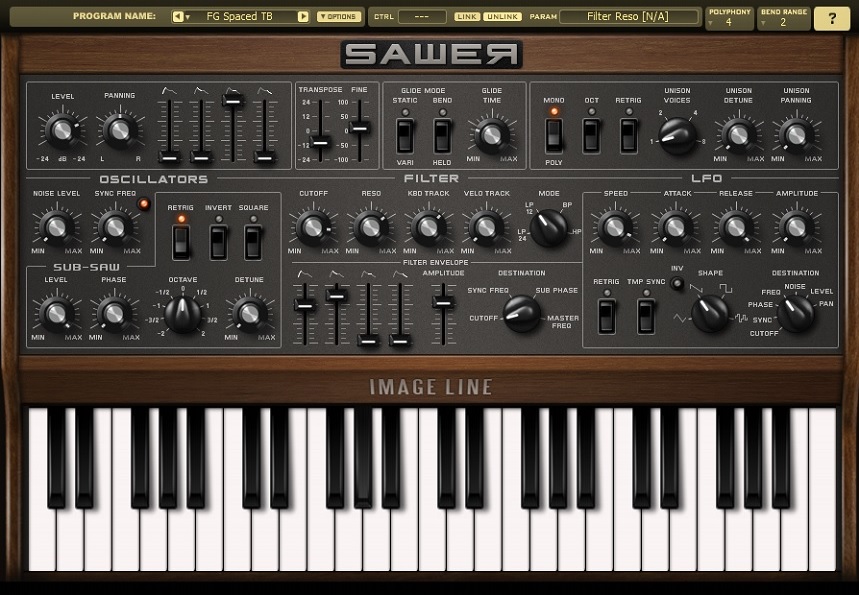 Sawer is a software synthesizer based on the 80s analog sound engine, with a unique sonic character reminiscent of the Polivoks hardware.

You could use it to create old-school west coast synth leads that are famously found in the GTA San Andreas soundtrack, Nothing but a G-thang, Music and Me, and more 90s gangsta rap songs. You can also create funky bass lines and atmospheric pads & chords using the synth. All you need to do is to utilize the portamento and glide knobs on a simple sawtooth or a triangle to create that slow note transition when the note changes.

The virtual synth is a stock plugin on Image Line FL Studio and is an underrated and underutilized production tool, given its precise analog modeling, making it sound great. It has a main oscillator, a sub-oscillator, a filter, an LFO, and an ADSR.

You require FL Studio to run the plugin, which can be used on both Mac and Windows.

You need to know only the sound design basics to create West Coast & G-Funk sounds on Sawer, and even if you don’t know that, the presets have you covered. The synth has a straightforward, streamlined signal flow and an intuitive and responsive interface. Combined with external drum samples, you can easily create a kick-ass West Coast beat with this synth alone.

GrossBeat by Image-Line is one of the most used plugins in modern music production, as it comes in most versions of FL Studio.

This plugin is a time manipulation tool with many uses, such as gating, glitching, repeating, scratching, half time, stutters, and many others. It is not just a Tape stop/start plugin; you can do those effects within this plugin, and that’s why we had to include it in this list.

It’s an extremely popular tool within the genre of Uk Drill. Most melodies are made with the GrossBeat halftime. 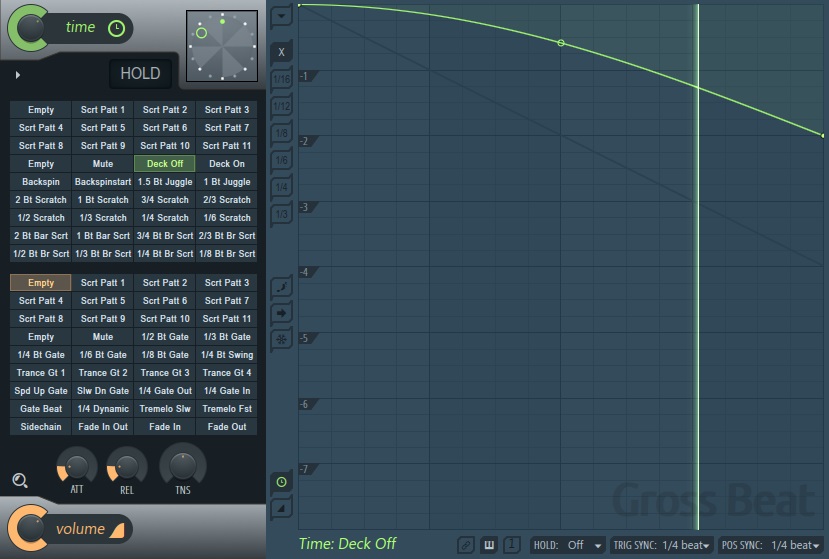 Gross Beat Tutorial - Everything You Need To Know - FL Studio 20

This plugin is available for Windows XP, Vista, Win7, Win8, Win 10 or higher.It comes within some versions on FL Studio.

In summary, GrossBeat is one of, if not the most, versatile plugins in this list. It is so much more than just a tape stop/start plugin, and the fact that it is a similar price to some of the other paid options makes it stand out, don’t forget if you use FL Studio, you may already have this plugin in your library.

It does lack the tape emulation features that the other plugins on the list have, so keep that in mind, but as a tape stop/start plugin, GrossBeat stands out above the rest for its versatility and the sheer amount of effects you can create.