Today, we will cover the top 5 FireWire audio Interfaces of 2022 available for Music Production and Audio Recording. One of the most important aspects of music production is the Audio Interface.

The Audio Interface takes an analog signal and converts it into a digital signal recorded in your DAW (Digital Audio Workstation) of choice. Without an audio interface, you wouldn’t be able to record your music efficiently.

Audio Recording is an art form expressed through a proper audio interface. If you are having difficulty deciding what kind of audio interface to choose for your audio recording endeavors, no need to worry, we have you covered.

There are two important factors on why a FireWire audio interface is right for you. The first is transfer data speeds that make it much easier for the signal between a direct-input instrument or microphone to transfer data to the Digital Audio Workstation (DAW) and latency. Latency is the delay before a data transfer begins to follow instructions for its transfer.

For example, a guitarist is playing their guitar in real-time by directly plugging it into their audio interface. As a result, the guitarist feels the delay of the notes being played to what their digital audio workstation is recording.

Second, audio recording and music production can be expensive; we did the work for you and created this guide for you, so you don’t have to worry about spending every last dime to bring your creations to life. So now, let us begin.

The Focusrite Saffire Pro 14 is more of a budget-friendly option for your home studio or smaller professional audio production setups.

If you’re easily intimidated by multiple knobs, buttons, and complex display gauges, you don’t need to worry. The non-complicated front panel has two combo ports with gain control for each, a master volume control for your monitor, and a headphone jack with a volume knob. The back panel is equally simple with some more input/output options.

You can use a microphone or plug in your preferred instrument for live and direct input recording. In addition, you can utilize the Saffire’s MixControl feature, which includes an ultra-low-latency DSP mixer and router.

The Pro 14 is compact, easy to use, and offers a wide range of features compared to its diminutive presence.

Pros:
Being a budget-friendly device with easy-to-use features, the Saffire Pro requires almost no time to set up and can be a starting point for beginner-level enthusiasts. The 24-bits/96kHz sound quality is a good value for the price.

Cons:
If you want to record more than one instrument without using a direct input signal chain, you would have to purchase more mic preamps to accommodate the loss of mic pres. Only having two mic pres make it much harder to record a live performance. 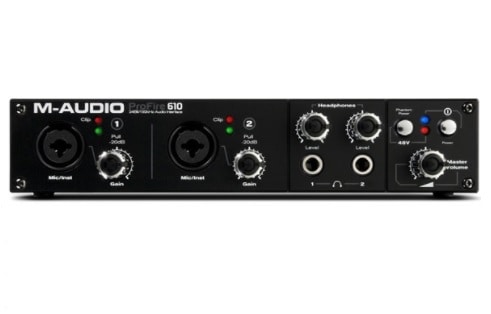 The M-Audio ProFire 610 packs a real punch and provides value for money in terms of the features it offers.

Riding on the coattails of its predecessor, the FireWire410, the 610 comes with several new features encased in rugged packaging. In addition, it shares some groundbreaking features with the flagship ProFire 2626 device. The interface has been kept simple but has all the necessary front-facing controls like two combo ports, a master control, and an input for your headphones accompanied by adjustment knobs.

In the 610, you will find M-Audio’s Octane preamp technology, a DSP mixer that can handle most of the work done by third-party plugins, and 24-bit/192kHz of premium sound quality.

If you want to convert your computer into a full-fledged recording studio with the added benefit of portability and versatility, the M-Audio ProFire 610 is another budget-friendly option.

Pros:
The M-Audio ProFire 610 is an audio interface that you can consider if you are looking for a user-friendly device having multiple input/output options that should have you covered for a while without needing to upgrade.

The DSP mixer gives you more control of your input and output signals. The Profire 610 comes with a price tag that is comparatively on the lower end.

Cons:
The thing about M-Audio ProFire 610 Firewire Audio interface is that it has major driver issues. Driver issues pose a significant problem for those not keen on fooling around with audio drivers to ensure the audio interface is working at its full potential. 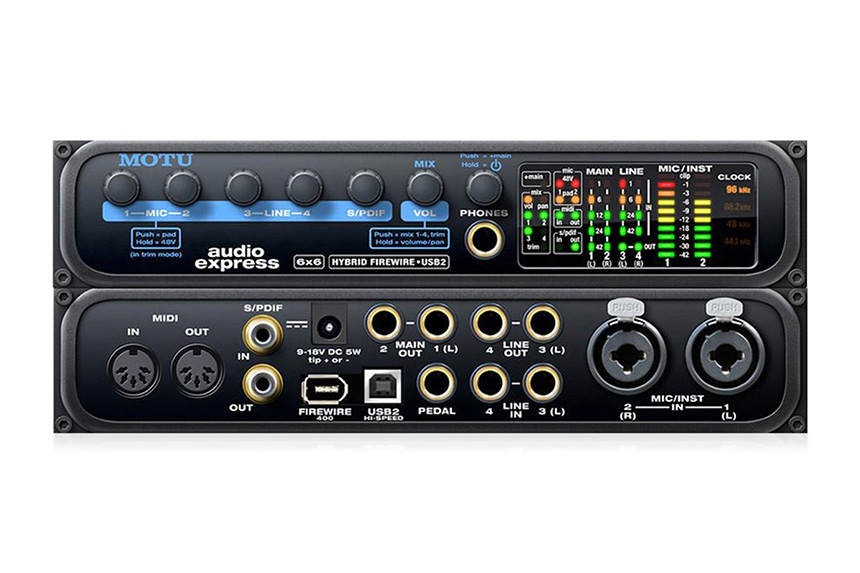 The MOTU Audio Express checks all the boxes if you’re looking for an economical audio interface for your studio.

It will take care of your recording needs and help you record simultaneously from multiple mics and instruments regardless of whether you’re using an Apple computer or a PC. In addition, the device works seamlessly with all popular recording software out there.

Irrespective of being so easy to use, the device can be a suitable choice for beginners and expert-level music producers.

Pros:
While recording with the MOTU Audio Express, the latency is almost negligible. The device has both Firewire and USB collectivity options. Just plug and play as the Audio Express is easy to integrate into any DAW. Having two combo inputs (mic/instrument) is a handy feature to have and gives you the flexibility of plugging in any combination of mics and instruments.

Cons:
The MOTU Audio Express is a bit buggy with some operating systems. Your computer may start acting up and freeze altogether, demanding a reboot. Also, you may hear random popping and crackling noises, which are not very pleasant when the creative juices are flowing, and the musician is shoulder deep in the mixing process.

What gives the MOTU 828 MK III its “Hybrid” name is the fact that it works with Mac and Windows systems.

The MK III also has its own EQ and other effects like compressions and reverbs that can be applied and manipulated through the CueMix FX software, eliminating the need to invest your time and money on separate plugins. The device can also act as a standalone mixer and has multiple inputs/outputs for all your mixing needs.

In addition, it has combo inputs on board that can accommodate your mics and your instruments in any combination that you can come up with. The MK III Hybrid takes versatility to the next level by offering the high-quality sound of 24-bit/192kHz while recording.

The MOTU 828 is stable and gives a well-rounded performance on Mac systems.

Pros:
All the settings of the 828 MK III can be accessed directly from the front panel, making it user-friendly. Pairing the CueMix with an iPad gives you wireless controls at your fingertips. The device has no latency and provides high-end sound quality for Mac and PC users. The 828 MK III works flawlessly on Mac systems and remains stable during even the most demanding sessions.

Cons:
Some MOTU devices are notorious for creating problems for those using Windows operating systems; unfortunately, the 828 MK III is no different.

You may end up trying a combination of restarting your system or reinstalling the drivers (which aren’t regularly updated) to get it to work again. In addition, one may frequently hear annoying popping or clipping noises when recording.

The MOTU 896 MK III Hybrid borrows some of its features from its predecessors.

The 896 works well with any system you own, thanks to its hybrid connectivity options catering to Mac and PC users. Most of the issues that Windows system users had in the past have been looked at in detail and fixed or improved. However, it has a hefty price tag nearing the 1K mark and is one of the priciest of the MOTU product line.

Seemingly a little bulky in its presence, the rack-mountable 896 is quite light on your system as most of the programming and processing is done within the unit itself.

With a multitude of input and output options, you can connect all the mics, instruments, speakers, and monitors you could imagine into this one unit. The device has better stability and works seamlessly with  Mac and Windows systems.

Pros:
One can be sure of never running out of input/output ports due to the plethora of options available. The 869 has 24-bit/192kHz sound quality which seems more than sufficient for professional-level recording and mixing.

In addition, the device requires only half the storage space (250 GB) as compared to the 839 or the flagship MOTU 1248. The MOTU 869 runs seamlessly on Mac and most Windows operating systems.

Cons:
The knobs can be a little noisy and give out hissing and popping sounds when rotated. In addition, the functionality of the preamps seems to be a bit buggy, and the input and output signal sounds muddy and slightly distorted at times.

The display panel may also dim out over time. The device comes with a big price tag, so someone with lesser requirements may prefer a more economical unit.

Having gone through all the options shared here, you now know what each of these audio recording/mixing devices has to offer. You have a variety of features and price points to choose from. The final decision rests with you and will depend on your preference and requirements.

If you’re a solo artist who is looking to record vocals and a limited number of instruments, with a slight room for more, then perhaps the MOTU Audio Express would be a good choice.

If you have a bigger setup and often collaborate with multiple musicians, or perhaps you need a solid mixing option for a live mega-event, then you would prefer the flexibility in terms of more input/output options. Going for the pricier versions like the 828 or the 896 can be a suitable choice for you if you can manage to spend the big bucks.