I’m sure most of us have wondered what causes guitar strings to wear down too quickly and, more specifically, why they have a peculiar odor that isn’t typical of rusted metal. As if this were of no concern to them, some even participate in the problem.

I can state that guitar strings degrade rapidly and have an unpleasant odor if you don’t maintain a regular maintenance schedule for your instrument. For example, I lived in a humid, hilly region when I first picked up a guitar. Because moisture and perspiration are not precisely compatible, my guitar’s strings rusted within the first three days after I got it.

For the many of us who have pondered this mystery, I present today an article that will help you aid in the early detection and prevention of this issue.

So, Why Do Guitar Strings Smell Like A Pee?

Because of the materials used to produce guitar strings and the sweat from the player’s hands, your guitar strings could have an odor similar to that of cat piss. It’s easy for the string to turn stale and smelly from accumulating oils from your fingertips.

Some string materials decay noticeably more quickly than others when exposed to sweat from the hands. For instance, rusting caused by sweat is a common cause of early failure in steel guitar strings.

In this article, we’ll discuss the causes of and solutions for foul-smelling guitar strings.

What are the reasons for that stale, pissy smell coming from your guitar strings?

Few people know that the guitar, especially the strings, may have an unpleasant odor. It can be unpleasant to play with them, but their odor can be overwhelming. So, why do guitars get stinky in the first place? Furthermore, what methods exist for permanently eliminating the odor?

In warm weather or while we’re belting out a tune, we tend to sweat or get grease on our palms. The strings will become increasingly difficult to grasp as sweating accumulates.

The strings will rust considerably more quickly if they are constantly exposed to moisture, which might happen if you do this frequently or if you tend to sweat excessively.

Your hands’ natural oils might make your guitar smell bad. As you utilize anything, your skin’s natural oils will be released and attached to whatever you contact.

When your hands start to smell terrible after playing guitar, it may be because the strings have absorbed oils from your hands. These oils can also spread to nearby surfaces as you play the guitar. The fretboard, for instance, may take on an unpleasant odor due to being saturated with it.

Unless you find a technique to vacuum store your guitar strings, they will be exposed to air at some point. Therefore, it may be concluded that moisture is likely to cause guitar strings to rust rapidly. The air typically contains moisture, while certain locations have higher humidity levels. Humidity refers to the amount of moisture present in the air.

Exhaling causes water vapor to be released into the air, which, if the space is not properly ventilated, will add to the already high humidity levels. If you have humidity issues or your windows routinely fog up, it’s possible that your room is not extremely humid.

The wood in your guitar might get musty over time if you don’t keep it well-maintained. Too much time in damp conditions can also cause unpleasant odors to develop. It has been stated that using a small amount of vanilla extract can help mask unpleasant scents temporarily, but it won’t be long before they return. If you want to preserve your guitar from developing a musty odor, you should always store it in a case while it’s not in use. 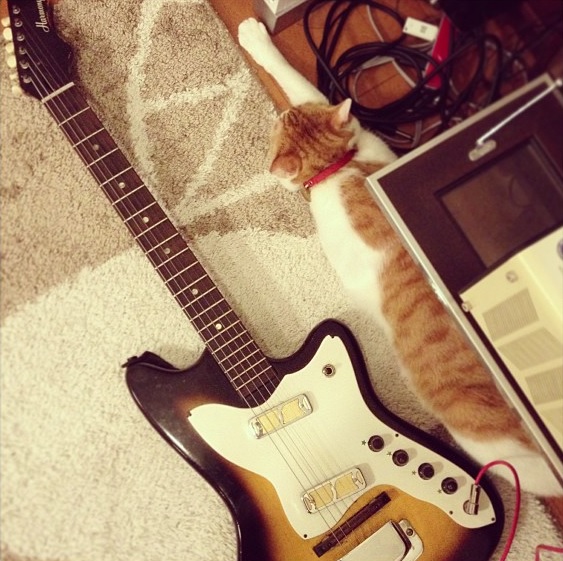 How do we eliminate the smells or stop this from happening in the first place?

The stench of guitar strings can be removed using a guitar string cleaner. Apply a bit onto a microfiber cloth. Never use household cleaners on your guitar since they might cause harm.  It would help if you also cleaned the guitar board while at it because the panel might also emit a foul odor.

While washing your strings can help, the best and simplest solution to eliminate the smell of your guitar strings is just to replace them. Replace your guitar strings after 100 hours of playing or every 3-4 months if you haven’t played that long. Once you’ve changed them, wipe the strings with a microfiber cloth every time you play the guitar to ensure they stay like new for as long as possible.

I can’t stress the significance of this enough. Before a buddy brought it up to me right before the practice, I hadn’t even considered it. After that, I’d pick up my guitar and perform whenever the mood struck.

The fact is that we all have sweaty, greasy palms at some point during the day. Therefore, it’s important to wash (and dry) your hands well before playing an instrument to prevent transferring oil and sweat, both of which attract water, to the strings, which will subsequently react with oxygen in the air and rust. This rust risk may be mitigated with a quick wash and dry before each play.

You’re right, string instruments may work up a sweat during a particularly rigorous rehearsal or performance. This is inevitable and part of the natural order. The one thing you can do is to make sure that any remaining wetness is wiped away after that. Use a dry towel to remove the strings’ moisture and grease.

Additionally, I suggest regularly using a string cleaner, such as the GHS Strings FAST FRET. This eliminates the buildup of sludge and grease. After washing them, use a dry cloth to wipe them off.

You should probably switch to a better string brand if you aren’t emotionally invested in the one you’re currently using. Elixir strings, for example, are coated with a protective nickel substance that is supposed to prevent corrosion and extend the life of the strings.

You may save money in the long run despite the higher initial investment if you don’t have to replace them often. However, if you insist on using strings, you may face the fact that their replacement frequency will increase.

In light of what has been said thus far. The rate at which the strings rust is affected by where you keep your guitar. Find a dry, cool spot inside your house. Keep an eye out for damp spots and open windows to help circulate air.

A cheap humidity meter like this can tell you just how humid a room is if you are unsure, like this one: 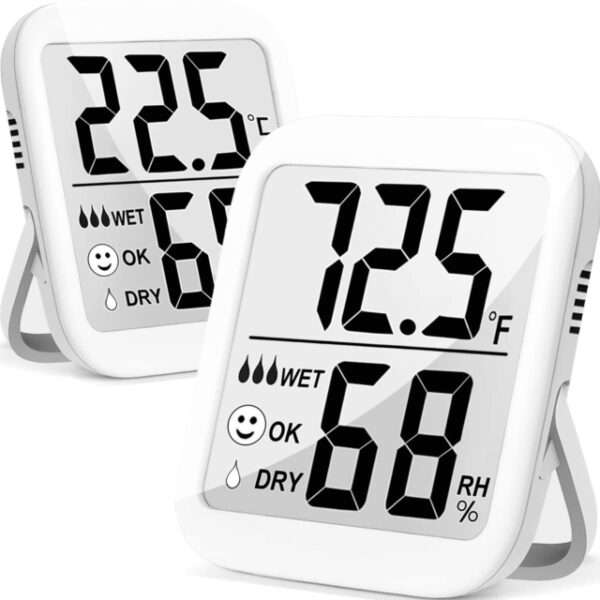 They can accurately report the relative humidity of the environment. If possible, a reading of 50% or less is desired; the lower, the better. To prevent rust, you should generally avoid storing your guitar in any place where the humidity is consistently over 50%. 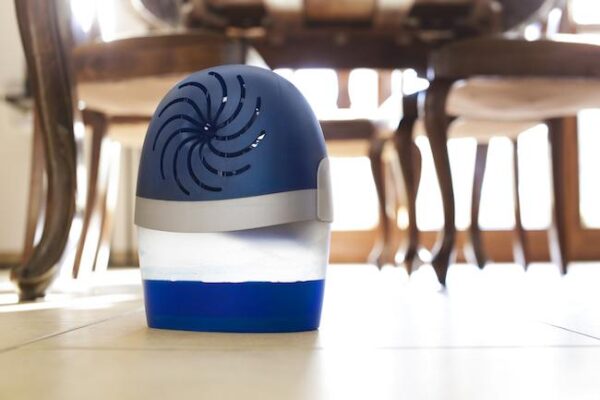 You might invest in a dehumidifier for your home studio if you’re having trouble finding a dry space. Inexpensive models like the one shown below may be placed next to your instruments to remove excess moisture from the air.

Can the strings be saved from rust and disrepair? 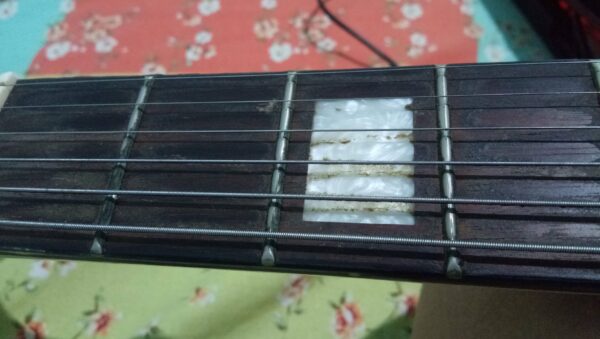 As was previously said, your acoustic guitar might not rust and turn orange because of the strings. These strings are often thicker and “wrapped” with copper or another substance. If you suspect this is the case, you might try to remove it by purchasing a cleaning solution and wiping it off.

There’s a bad chance that strings can’t be saved if they’ve rusted. Although rusting steel may be treated with various chemicals to make it last longer, this is usually not a viable option, and the material should be replaced.

What happens if I boil guitar strings?

It’s fine to boil your guitar strings to eliminate any lingering odors, but you’ll get better results and avoid damage if you use a cleaner designed specifically for this purpose.

Let your guitar strings cool after boiling them to avoid getting burned, and then give them a quick wash-off with a clean microfiber towel.

I hope this post has helped you get perspective on your problematic connection with the instrument. Of course, if you want to get rid of bad odors and have the guitar for many years after the purchase, you should apply wood maintenance products when changing the strings.

Here, I’ll share the guitar care regimen I’ve developed and the solutions I’ve found for common issues. First, I stocked up on guitar cleaning and maintenance supplies. When I switch out my strings, they get a lot of pleasure. The guitar remains in tune better, and the sounds and tones are more authentic if I change them every two weeks, which is how often I do it. Second, I always clean up before a performance, so I don’t feel self-conscious about leaving my fingerprints and skin flakes on the guitar’s strings. There is a certain cloth I use after every performance, and I wash it frequently due to the buildup of grime.

Although there are cleaning solutions available, I find that the strings seem to attract even more dust and filth after being cleaned. The effect doesn’t stay as long, and once again, it doesn’t sound very pleasant, but it’s a lifesaver if you forget to replace the strings before a concert or don’t have them available.

We were hoping you could recognize the significance of the habits you will need to form going forward. You’ll write better music this way, I promise. 🙂