Today, we’ll be looking at the most fundamental component of music production, the Digital Audio Workstation (DAW).

We are aware of instruments, gadgets, recorders, etc. They are all used together to create the music we all love. And in our current era, computers are at the top of the technological ecosystem. Hence, people designed various software to use computers for music production.

Such software includes instruments, audio processing effects, editors, and so on. All of these require a common foundation to function on — the base on which all the components reside if you will. That foundation is a DAW.

How To Make Music Without Using A DAW?

FL Studio vs. Ableton vs. Logic vs. Cubase vs. Pro Tools Which is Best ?

What Is A Digital Audio Workstation (DAW)?

A DAW is a piece of software that can record, edit, and mix audio and midi into a song. It is a combination of multi-track audio recorders, mixing consoles, and arrangers in digital form. It expands upon the original concepts of hardware by adding many modern and convenient features.

Nowadays, most DAWs come with bundled instruments, effect plugins, and samples/loops, so you can start making music immediately. And since they are also expansive, you can add third-party plugins, instruments, and commands by purchasing them separately.

As we’ve established, a DAW is primarily an empty canvas for you to create songs. It’s where the instruments and vocals are recorded, edited, and mixed into a final song. Of course, DAWs are also used for other media like films, games, radios, podcasts, etc., anywhere audio is involved.

Each audio project consists of various stages. They include recording, editing, mixing, and mastering. Depending on the kind of project (a song vs. a podcast), you will employ different functions of a DAW. Hence, we will talk about each of these stages and explain how a DAW can be useful.

Recording is usually the first step in music production. It’s when you record instruments and vocals to lay down the foundation of your composition. A DAW is used to create multiple tracks (or layers of sound), where you can then record audio from microphones, guitars, hardware instruments, etc., or midi data from midi keyboards, guitars, wind instruments, etc.

In this stage, you alter and add the recorded audio and midi to sound more coherent. Digital Audio Workstations offer an audio editor, a piano roll, often a staff notation editor, and a drum editor for this stage. Other than the first, they are midi editors.

We will talk about them for a moment. However, note that our intention is to provide a general introduction to all DAWs and how they function. The editor’s name, workflow, and functionalities may differ from one DAW to another. 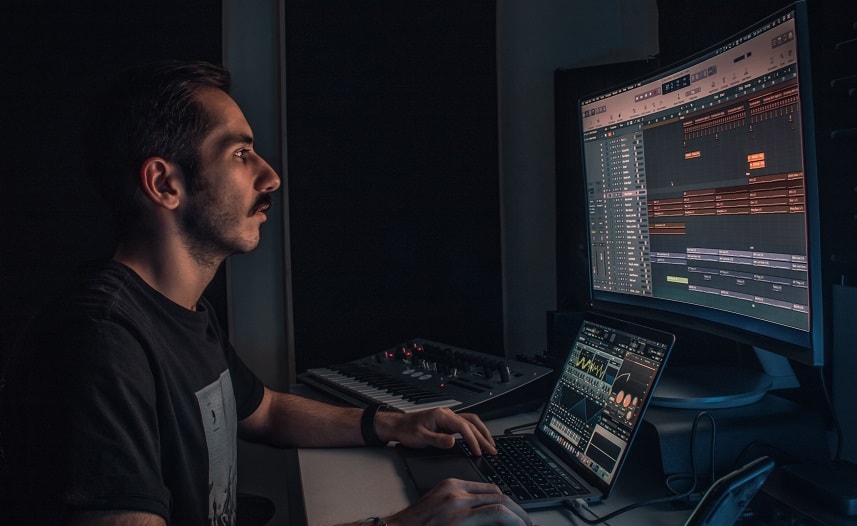 In the mixing step, you will mix all the various elements of your song to form a coherent piece of music. It involves controlling the volume, space, and dynamism of each instrument and vocals to make them sound adhered together. For this purpose, a DAW has a page called a Mixer.

You may have seen a mixing console in an audio studio. The Mixer is a digital version of that hardware. It lets you manipulate the sound and add effects such as reverberation, echoes, and others to make the sound “thinner” or “thicker.” Similarly, there are effects to make the audio similar in volume throughout the length of the song.

Often, game or film sound editors also employ these effects/plugins to make their audio meaningful to a scene. Similarly, podcast/radio editors use them to make the sound cleaner or more stable in volume. There are way too many functions a DAW serves in this step to describe in a short article!

Finally, in this step, you will make your mix from the previous step translate well to all playback devices like phones, CD players, computers, car stereo, and even club speakers. It involves making the sound itself comparable to reference songs in your genre, adding effects to make it compliant with various platform criteria, and tagging the files.

After that, you will export or render the song in a format suitable for your intended release platform. The effect plugins we talked about in the previous step are also helpful here. And as for tagging the files, most DAWs let you tag your export with the title, artist, genre, album title, etc.

Other media editors also use this tagging feature to tag their audio clips for file organization. The same goes for exporting audio in different formats.

We’ve covered most of the primary functions a Digital Audio Workstation has in music production and audio editing. Next, let’s talk about expanding your DAW to get new sounds and functionalities. Alas, not every DAW supports all the available third-party plugins and instruments.

Computers are divided by operating systems: Microsoft Windows, Apple macOS, and Linux. Furthermore, each has its special formats or digital languages in which a plugin or virtual instrument is available. For example, Pro Tools and REAPER are two DAWS that support both Windows and macOS. However, Pro Tools only supports a format called AAX.

After you have checked and made sure your DAW is compatible with your desired third-party software, you can go ahead and install it. Fortunately, most plugins and virtual instruments are available for most DAWs in Windows and macOS, the two most popular OS.

We couldn’t possibly end this article here after enticing you with the vast world of new sounds! So, here are some of our handpicked lists of plugins and instruments:

13 Best Synths And 5 Free Ones

It wasn’t until the late 80s when digital audio recording became a thing with the release of Sonic Solution’s Sonic System paired with Apple Macintosh. Then, in the 90s, people saw the birth of Pro Tools, Cubase, SONAR, etc. Many of these DAWs were available in the late 80s for either only midi editing or only audio editing.

As years went by, computers became more powerful, and DAWs evolved. Now, in 2021, we are fortunate to have the largest number of intricate DAWs, virtual instruments, effect plugins, etc., by far, capable of running on any general computer, so much so that we can even list DAWs by CPU usage.

In this era, the initial step to making a piece of music is opening a DAW software, even if you prefer composing with paper and pencil. DAWs allow you to listen to your music as you make it, giving you the ultimate “what you hear is what you get” in music production.

However, there are so many DAWs available nowadays that choosing one can be worse than choosing a laptop for music production. Our advice would be to figure out what you want to do first. If you are interested in EDM, check out Ableton Live, Bitwig Studio, Waveform 11, and FL Studio.

And if you are interested in traditional music, check out Cubase, REAPER, Studio One, and Cakewalk by BandLab (free). If you intend to edit audio for games or film/TV, you should look at Nuendo, REAPER, and Pro Tools.

Of course, it is a good idea to get your feet wet with free software for starting. Cakewalk, Waveform Free, Studio One Prime, and Ardour are excellent free DAWs you can get started with. And you can find free instruments and plugins here.

We hope this article helped you understand what a DAW is and, hopefully, get you started in the incredible journey of music production. And if music is your passion, check out this article next and see if music can be your career.