Waves Audio unveils its take on the modern way to make your music sound old, and it’s everything you’d want and more.

Lo-Fi plugins are effect processors that emulate the sounds of various old hardware players and samplers. It makes your music sound as if it belongs to an older era, adding a nostalgic value to it. And after the article on the best Lo-Fi plugins and their uses, it’s clear to see how there are many ways to achieve the said effect.

So, when I was informed that I was getting to review Waves Retro Fi just in time for its release, I was more than excited to sink my teeth into it. What sets Retro Fi apart is that it has multiple eras of music generations to choose from!

For example, you can hear a clear distinction between the records of the 50s and 60s. Retro Fi seeks to emulate the exact decade you are looking for. Furthermore, if you use the rest of the modules in the plugin to “age” the player, you can make your music sound like it was recorded in the 1950s but played back in 2022. It emulates nuances like tape-warping and dirt/scratches to age the audio.

Retro Fi wants a different treatment, and you can tell from its ragged-hardware visual theme. However, the colors resemble something off of a cyberpunk video game. Whether or not you like the deviant design, the knobs and parameter labels are clearly visible, and the modules are easy to navigate.

The plugin has four modules: Device, Space, Noise, and Mechanics. The Device section sets the “player” of the audio—you can select the tonality of the audio, the era of the music, and add distortion and ring modulation. Next, the Space section features a delay and a reverb, each with a separate power button.

After that, we reach the Noise module employing a surprisingly comprehensive noise library. And finally, we have the Mechanics module featuring two identical sets of three parameters. The module emulates the pitch warping you’ll hear in any analog recording and playback system. And since the effect tends to get more apparent older, the vinyl/tape gets, it essentially ages your audio, giving it an authentic vibe.

The aptest way to describe this plugin would be to go through each of its modules first. Each module adds a vital element to create a completely custom but still authentic emulation of vintage recordings. Other than the modules, you’ll also find input and output gains to add or reduce saturation and output filters.

Now, let’s have a look at the plugin’s key features in detail: 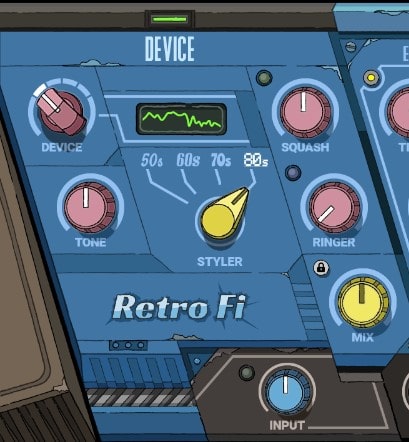 The Device is the first section of the plugin and where the majority of the tonal changes occur. The first knob, called Device, lets you select from four sets of impulse responses (IR). For every set you can choose, Retro Fi employs two IRs: one for the lower frequencies and the other for the higher frequencies. Then, you can change the amount of the high and low frequencies using the Tone knob.

Next, the Styler knob lets you select the era of the audio: 50s, 60s, 70s, and 80s. I find experimenting with Device and Styler knobs gives excellent results. For example, suppose I want to achieve the sound of a gramophone with the classic horn speaker. Setting the Device to type A and the Styler to 50s immediately achieves the sound I want.

Out of the four types of Device options, A is the brightest with a prominent boost around 3 kHz, B sounds muddy and nasally, C sounds boxy (like an old radio), and D is flat. Next, the Styler parameter has these: nasally 50s with most of the sound around 1 kHz, boxy 60s with a focus in the middle frequencies, slightly dark 70s but otherwise pretty flat, and the classic smiley-EQ 80s with a dip between 100 Hz to 18 kHz. The 70s option wins if you aren’t looking for drastic changes!

Other parameters in this section include Squash and Ringer. Squash lets you add a compressor or an expander depending on whether you turn the knob left or right. It allows you to add saturation to your audio quickly. And Ringer adds ring modulation. 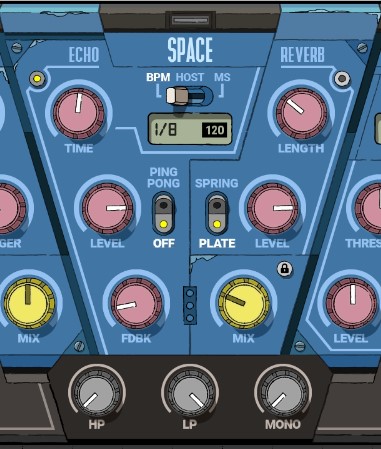 The second step is to add echo and reverb, each of which you can activate separately. The Echo is a standard delay effect with BPM sync, host sync, and millisecond-based delay options. It also lets you activate ping-pong mode, which bounces the delay feedbacks between the channels of your stereo mix.

Similarly, the Reverb features two kinds of reverb: spring and plate. However, the spring reverb doesn’t quite “ring” like, say, a standard guitar Fender spring reverb as one would expect. Instead, it sounds clean and smooth, making it a little modern and appropriate for vocals.

The plate reverb, though, is highly prominent in showing its character, making it less of a versatile reverb. However, I liked it on gated snares, mixed with yet another reverb. It added volume to the tail, thanks to it quickly latching on to the first few harmonics of the snare’s frequency spectrum. A filter on the reverb section would’ve been a godsend, though! 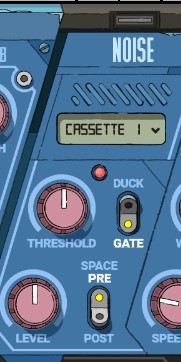 No Lo-Fi effect would be complete without some vinyl crackles and tape hiss, which is this module’s specialty. And it was the noise library that shone brightest for me. There are seven categories of noise: cassette, digital, electric, FX, mechanics, synth, and vinyl. There are three kinds of noises inside the cassette category, but the rest have way more. For example, there are six vinyl and twelve electric noises.

At the bottom of the module, you can control the noise level and whether the noise section should be pre or post the space module. For a realistic old recording, I would set the noise in the post so that the reverb/delay effect sounds pre-recorded. However, if you want to make it sound like you sampled the audio, try setting the noise to pre. The space module will then act like a hardware plugin you used after sampling the audio. 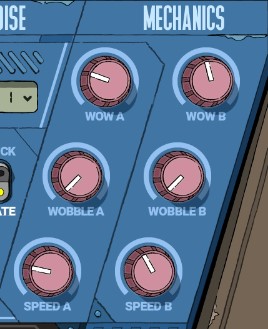 In the Mechanics module, you’ll find two nearly identical columns with three knobs: wow, wobble, and speed. The difference is each parameter has either an “A” or a “B” suffix. The “A” controls emulate a cassette tape, whereas the “B” controls sound more like vinyl records. Using one of them alone provides authenticity, but, of course, you could also use both together creatively.

The wow effect generates random variations in pitch, which is often seen in cassette players with a faulty pinch roller. It could also be a result of a vinyl record warped due to sunlight or dampness. Similarly, the wobble effect creates amplitude variations, making the audio softer and louder. It’s more often seen in vinyl records than tapes. And finally, the speed knob controls how fast the variations occur.

In general cases, the effects in this section are best used in moderation. However, a heavier modulation makes your audio sound as if it has been through a lot. This effect could be an excellent way to convey a traumatic experience not only in music but in film or game sound design too.

You’ll find thirteen core presets that demonstrate the fundamental use of this plugin and about 250 Artist presets, designed by 54 artists and expert engineers. These artists include the likes of mixing extraordinaire Tom Lord-Alge, composer Mick Gordon, and Ivor Novello-nominated songwriter Mark Ralph.

Finally, you’ll find a high-pass and low-pass filter at the end of the signal chain. The high-pass ranges from 30 Hz to 1.5 kHz, and the low-pass from 1.5 kHz to 21 kHz. Both of these are filters of a high order.

When looking for a Lo-Fi effect plugin, our priority is to ensure the sound is authentic and customizable. Waves Retro Fi uses impulse responses to add as much authenticity as possible. And it nails the era-specific sounds, especially the vintage 50s vinyl sound. The noises also help add realism, and some of the FX noises could even be handy as drones and SFX.

However, despite its exciting impulse responses, I find Retro Fi somewhat lacking flexibility, especially when you compare it to something like XLN Audio’s RC-20 Retro Color. I was hoping to see a plugin that could add bit-crushing, sample rate changes, custom saturation, etc., although Waves provides a different way to customize your sound using era-based IRs.

Retro Fi provides four decades of music generations. You can age your audio to make it sound like it’s playing from a gramophone or a cassette player. Furthermore, it provides a large number of presets and noise samples. As for the pricing, I’m not too keen on its retail price tag of $99. It feels overpriced considering how excellent software like RC-20 is at the same price. However, thanks to Waves’ nearly endless sales, you can grab the plugin for $29.99, which is undoubtedly a fair price.

Lo-Fi plugins in the $20-50 price range tend to focus on one kind of sound. For example, AudioThing Vinyl Strip is solely meant for emulating vinyl records, and BeatSkillz SampleX V3 recreates the sound of vintage samplers. So, Waves Retro Fi’s multiple audio eras, mechanics, space, and comprehensive noise library make it far more customizable. The only fault is that Waves only gives you a year-long update coverage. After a year of purchasing the plugin, any updates, even minor ones, require you to buy a Waves Update Plan. It can cost from $12 to $240 per year, depending on the number of products you own.

Waves Retro Fi is an innovative Lo-Fi plugin that uses impulse responses to emulate the sound of multiple generations of music production technology. It features only the most important parameters, making the plugin accessible for beginners and quick for the experienced. It also features a reverb/delay section, although you can find it separately in the free LoFi Space plugin too.

Retro Fi is an excellent entry into the nostalgic world if you don’t already own a Lo-Fi plugin. However, keep in mind that although features like bit reduction and quantization are often found in such plugins, Waves decided to omit them. So, you’ll still need other plugins to have a comprehensive toolset. Where Retro Fi shines is in providing customizability in what it does.