With the advances in recording technology, so many people can now record anywhere they want. However, only some are aware of the best practices needed to create great-quality tracks, especially when it comes to their voice. So here are some tips for recording vocals without distortion and clipping.

We’ll look into clipping and distortion, how to avoid them, what kind of gear you’ll need, and the best ways to get ready for your vocal recording session. By following these tricks, you can improve the quality of your recordings and create great songs that will sound at home on the radio, streaming services, and wherever else you want to release them.

Contents show
1 How Do I Record Vocals Without Distortion and Clipping?
1.1 What Levels Should I Aim for in Digital Recording?
1.2 What Gear Should I Use?
1.3 Microphone
1.4 Pop Filter
1.5 How Should I Stand in Front of the Microphone?
1.6 Step-by-Step Guide to Recording Vocals
2 What are Clipping and Distortion?
2.1 Difference between Analog and Digital Clipping
3 Conclusion

How Do I Record Vocals Without Distortion and Clipping?

In order to avoid distortion and clipping when recording vocals, you will need to choose the right microphone, set your gain levels carefully, and position yourself at the correct distance and the right angle in front of the mic. Having a pop filter will also drastically affect the energy that reaches the microphone.

What Levels Should I Aim for in Digital Recording?

In the digital realm, clipping occurs when the signal goes over 0dBFS. So now you know to stay below this level. But, as vocals are so dynamic, going from softly spoken words to belted-out choruses in the same song, how can you set a good gain level that won’t distort without constantly moving the knob?

A good range to aim for is between -18 and -12dB. This gives you plenty of headroom before reaching 0dB and also plays into the sweet spot for most plugins. This spot is where these digital processors will perform best.

Of course, not every vocal performance will be precisely within this range. Some parts will be lower than -18dB, while others will shoot past -12dB. The best tip to follow is to break up the recording session into parts. Go through the song and choose the quieter and louder sections. Take a break between sections to reset the gain levels on your interface.

So now that you know the gain range to aim for, you can set your levels using:

All digital audio workstations have gain meters so that you can visualize how much signal is flowing from your microphone into your interface. They tend to be shown next to the channel’s volume fader. As you turn up the gain on your audio interface, you’ll notice the meter move and get higher. Have the singer you’re recording sing as loudly as they will in the section you’re working on, and turn up the gain until the peaks are hitting -12dB.

The same goes for external plugin meters. You can download a digital VU meter, which emulates the volume units used on analog gear. First, however, you must ensure that you understand the difference between dBFS (decibels relative to full scale) and dBVU (decibels in volume units).

VU meters can be calibrated to different levels compared to full-scale measurements. Put simply, 0dBVU is generally equivalent to -18dBFS, so you should actually aim for a level above 0dB on your VU meter. Make sure to check the calibration settings to confirm that the plugin you have is set to -18dBFS. You should also compare the VU meter to your DAW’s meter so you can be sure of what the equivalencies are.

What Gear Should I Use?

When you’re getting ready to record vocals, you need to focus on two pieces of gear:

The type of microphone you use will influence how much of your vocal performance will be picked up, as well as ambient reverb and noises. There are three main types of microphones:

Condenser and ribbon mics are more sensitive and require extra amplification using phantom power or external supplies. Condenser microphones are the most common for recording vocals as they pick up the nuances of the performance very well. However, seeing as they are more sensitive, they can also clip easily when not used correctly.

Dynamic microphones aren’t as frequently used for recording vocals as condensers but are commonly used by rock performers in the studio. They aren’t as sensitive, so they need higher gain levels. They also don’t tend to have as broad a frequency response as condenser and ribbon mics.

Whichever type of microphone you pick, you need to be aware of its capabilities and sensitivities. Setting high gain levels on a sensitive mic makes you more likely to clip the signal, leading to unpleasant distortion.

Plosive consonants are some of the most energetic sounds to come from vocals. Words with Ps are incredibly harsh and can quickly raise your input signal. The best way to counteract these plosives is with a pop filter.

Pop filters can be made of different materials, including nylon and metal. These materials effectively reduce plosive sounds and mainly differ in their sturdiness.

Whichever you choose, your pop filter should be placed in front of the microphone and as close to it as possible to maximize efficiency. However, it shouldn’t touch the microphone as this will cause vibrations or pops that will influence the signal. If it’s further away, the air from the vocal can slip in around the sides and cause higher bursts of energy. Aiming for around 1 inch (2.5cm) of space is a good target.

How Should I Stand in Front of the Microphone?

When you’re getting ready to record a vocal take, the microphone should be set up at the height of your mouth with the pop filter directly in front of it. You then need to pay attention to how you stand in front of it. Here are two positions to keep in mind:

You’ll need to find the best spot to stand in front of your microphone. You shouldn’t be too close, as the mic will pick up the dynamics of your performance in an extreme way while also picking up on more minor sounds (like your breathing) very intensely.

Standing too close can also cause the proximity effect. If the source of a sound (in this case, your mouth) is too close to the microphone, it will create a booming sound as the lower frequencies will be boosted. Stepping back a step or two will give your vocals a more natural sound.

You also shouldn’t stand too far away, as you will need to increase the gain levels further. This can increase noise from the electrical components in your gear and raise the background noises and reverb in the recording.

For more intimate recordings with quiet vocals, 2 inches (5cm) can be a reasonable distance. For louder performances like belting and screaming, 12 inches (30.5cm) can work best.

You should also pay attention to the angle at which you’re singing into the microphone. If you’re facing the mic straight on, you can get a more direct-sounding vocal, but it will also be more likely to cause clipping. Moving a few degrees to the side can result in fewer bursts of energy into the mic. Having said that, if you’re careful with the other steps to recording vocals, especially setting your gain levels, you won’t need to pay as much attention to this.

Now that you know the best practices for recording vocals and avoiding clipping and distortion, here is a quick step-by-step guide for the best results.

What are Clipping and Distortion?

Clipping occurs when the gain level of your signal goes over the system’s maximum level. When this happens, the signal becomes overdriven, crushing the tips of the soundwave. For example, if a sine wave signal is overdriven, you would see that the ordinarily rounded tip is flattened to a straight line before it starts falling again. 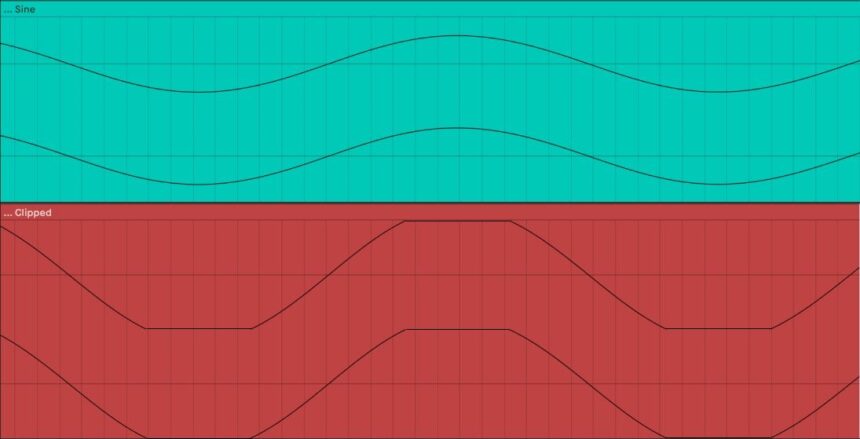 When this happens, you will hear a distorted sound through your speakers. Avoiding clipping is the best way to make your tracks sound good and to avoid damage to your speakers or headphones, as the more clipped distortion they have to play, the more they will overheat, which can lead to malfunctions.

Difference between Analog and Digital Clipping

Analog clipping happens when the amplifier is overdriven, creating a distorted sound. In extreme cases, this can be damaging to the gear you use. However, in more subtle cases, it can create distortion that sounds good. Analog guitar pedals are a suitable example. They push the gain of the signal so that it purposefully distorts, leading to harsher or fuzzier tones. This happens in a controlled way so that once the signal reaches the amplifier, it arrives at a safe level and won’t blow out the speaker.

Digital clipping doesn’t work the same way. It occurs when the signal is pushed too hard and the system can’t compute what’s happening. Put simply, there isn’t enough room for any more 0s and 1s for converting the analog signal (like a vocal) into a digital one (in your DAW).

When the conversion doesn’t happen correctly, it can distort the signal, but not in a pleasant-sounding way like analog distortion can. You will notice audio artifacts: little ticks and pops. These can become more present as you start adding processing like compression.

In this article, we’ve gone over the best practices for recording vocals while avoiding clipping and distortion. If you follow these tips, you can get clean vocal takes without damaging them, making your songs sound even more professional.

Setting your gain levels is the most crucial step, as it will influence the sound of your vocal track, as well as prevent any damage to your gear. Aside from that, make sure to pick the best microphone for your voice, use a pop filter, and choose the best position to stand in front of the mic.

Irish-Portuguese writer and musician. Experience in producing, recording, and mixing, as well as writing reviews and how-tos on plugins, gear, and software. I’ll make some changes to the Melda microtexts and get back to you soon.