If you’re confused by the concept of clipping, we can help you. This article will explain the difference between Soft and Hard Clipping and how you should use it on drums and mix in general.

If you’re new to the world of music production, you’ve heard of the word clipping. Sometimes it’s used in the context of recording as something to avoid. On the other hand, it is mentioned in mixing and mastering as something that can give extra energy to your sound or save the clarity and final volume of your mixes. Because of these different cases, you can get a little confused. But don’t worry, in this article, we’ll lay it all out for you to understand.

So what is the difference between hard and soft clipping?

Clipping is the state of a waveform when it cannot go beyond a certain threshold. In other words, it is a type of distortion that limits the signal. The main difference between soft and hard clipping is the limiting state. With hard, all transients are cut off, and the waveform becomes squared, while with soft, they are not shaved but compressed and rounded.

The difference between standard signal, hard and soft clipped | Source

You can also hear the difference in the sound. Hard clipping will have a pronounced distortion, while soft will present a more pleasing to the ear analog crunch. In both cases, clipping adds harmonics to the signal – additional frequencies that it did not have before. The harmonics are more pronounced in hard, while they are more unnoticeable in soft. But in both cases, it makes the signal more expressive.

A relatively simple example of these effects can be traced to guitar pedals like distortion and overdrive. But let’s break it all down in more detail and order.

Clipper vs. Limiter – The Differences, Purposes, And Mastering

Complete Guide To Limiter: How To Use It (+ Best Plugins & Analog Limiters)

Why is clipping used in music production?

The harmonics were commonplace in analog times. That’s because these effects were provided by hardware gear by physically limiting it to tube, transistor, or tape equipment. Engineers drove gain on units and got a more expressive sound with a kind of imperfection that was still pleasing to the ear.

After music production shifted to digital in the early 2000s, many realized that the sound in this realm was relatively clean and lacked extra energy. Therefore, engineers and producers began to look for ways to add this imperfection and coloration. So they started to use different plugins that could give effects like saturation, distortion, overdrive, etc.

Another important fact is that clipping can be pretty effective on drums or percussion. The fact is that often in these instruments, you can see peaks in which there is no such crucial tonal information. So you can use clippers to cut off these peaks and free up space for limiting, giving the ability to achieve clarity and extra volume.

When is clipping a bad thing?

If the limiting gave some pleasant harmonics to the signal in the analog realm, the situation is somewhat different in the digital. It is especially noticeable with recording. If your signal is too hot, the system can’t handle it, and you’ll notice a pronounced digital hard clipping, which is not pleasing to the ear because it will sound hoarse.

An example of a clipped signal

Therefore, it is necessary to monitor gain staging when recording digitally. You have to find the golden mean so that your signal is not too hot and has some headroom for further processing. But at the same time, it is worth remembering that it should not be too quiet because you can get a pretty high noise threshold.

To summarize, clipping in digital recording can be a pretty bad thing because it can make your audio defective. Of course, some repairing plugins can save you. Still, it’s always a good idea to make sure you’re correctly gaining staging unless you intentionally create a digital clipping effect for creative purposes.

What does soft clipping mean?

Imagine that the signal amplitude increases and reaches a certain threshold, but the waveform edges will not be cut off but rounded. In simple words, as it is amplified, the sound will be more expressive. We will even get harmonics, but not as evident as hard clipping. It is what will be called soft clipping.

Soft clipping allows us to ensure that we do not get any negative artifacts. Imagine you are using soft clipping on a kick drum. So you will increase the amplitude of the waveform, you will give the impression that the hit is even stronger, but despite this, the sound will remain transparent.

What’s The Difference Between Soft and hard Clipping?

The main difference between hard and soft clipping is not only in the limiting itself but also in the presence of harmonics. With hard, the waveform becomes square, which inherently adds more upper harmonics. It is precisely the distortion effect we are all familiar with. Soft clipping adds fewer harmonics, which are not as noticeable, but the overall sound picture still becomes more expressive. 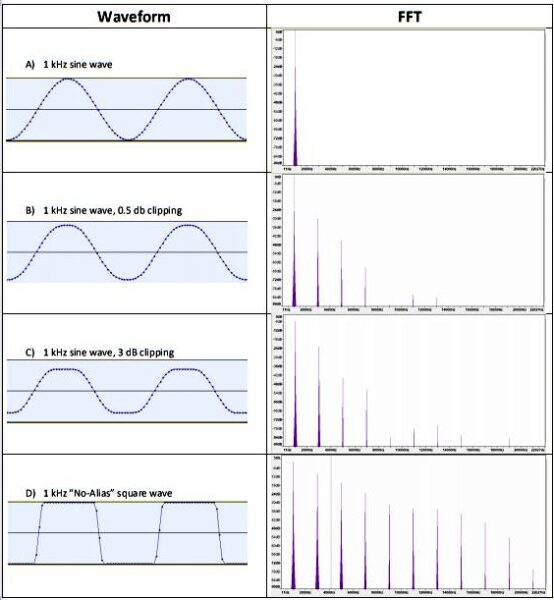 An example of the different levels of harmonics that are added during clipping. Source

In each case, the clipper will make the signal seem louder because of the distortion. And this is even though its level will be the same.

It’s worth remembering that, in the end, music is art. There is no right or wrong here. We are trying to say here that the choice of whether to use hard or soft clipping is up to you. In some cases, even aggressive-sounding hard clipping can be suitable if it fits your music in general.

How do you use soft-clipping?

In theory, you can use soft clipping for almost any instrument that needs extra expression. But it is most often used for drums, percussion, or masters in general. The first thing you need to do is get a clipper in a plugin. Some DAWs have such software built-in.

How Should I Clip My Drums?

If you feel your drums need an extra punch, clipping would be the perfect solution for that. And you can apply this to any percussion instrument – kick drum, snare, 808, or EDM bit. Below we will try to give you instructions on what to do.

Here are some examples of clipping on drums. The difference is subtle, but you can hear the snare and kick getting a little tighter. 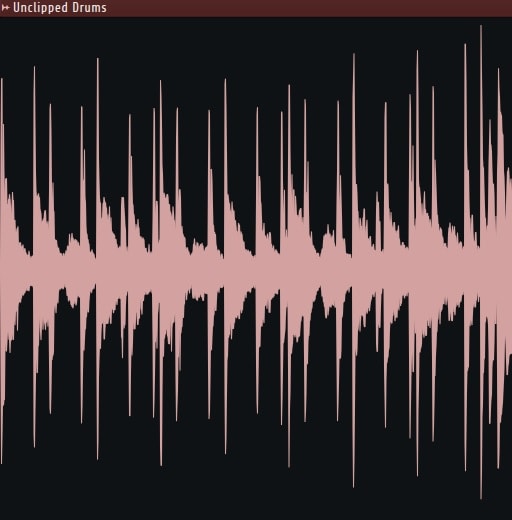 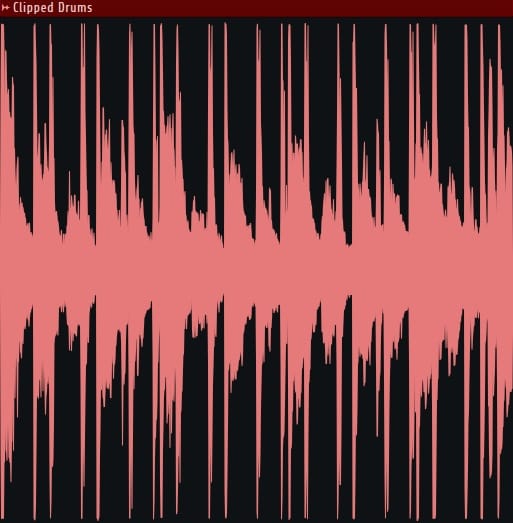 In the end, you’ll find that clipping makes your drums, percussion, or beats more pronounced in the mix. Of course, that doesn’t mean you have to clip them all the time. Think of it as an instrument that can help you sound more expressive. However, it will still be helpful in many modern genres, be it EDM, DnB, Trap, Rock, or Metal…

Should I put a soft clipper on a master?

Using clippers in mastering is another fairly common practice among professionals. It also allows you to add extra expressiveness and aggression to the sound or make room for more limiting to achieve maximum volume. Again, whether to add a clipper to your master should be your decision, based on whether you need it. But the following is a scenario in which a clipper can be a helpful solution.

These tips are somewhat superficial, but we’re sure they’ll give you a starting point and a general idea of what to do. If you use the clipper and limiter correctly, you will hear your master sound more expressive and louder. It can be a very helpful nuance, especially for modern genres.

Clipping is a powerful tool that can help you achieve transparency, expressiveness, and volume in your mixes. It’s a technique that many professionals use to build on the energy and impact that analog equipment provided in the old days. But let us give you some tips to conclude our post.

Always use your ears. It is your primary tool and will tell you if you need to use a clipper or if the situation is acceptable without one. If you feel that your drums are a little weak and you need to give the impression that they are being hit, even more, feel free to use the clipper and experiment with the sound.

If you hear that your master needs extra energy, aggression, and grit, then a clipper would be just as good an idea. Or, it can help you get rid of unnecessary peaks to make your audio louder.

Listen to what suits your music best – hard or soft clipping. Hard is better if you want a more aggressive result with odd harmonics. If you’re going to increase the amplitude of the sound and make the harmonics less obvious, soft will do the job.

Study it all in practice. It is the surest way to get the knowledge you need because you’ll be experiencing it all firsthand. Have fun mixing!

Ilarion Ivanenko is a remote mixing and mastering engineer, a musician with more than 15 years of experience. Specializes in rock, metal, progressive and the other genres. He can’t imagine his life without music, as it is the biggest passion in his life