We’ve already looked into some of PSPaudioware’s compressors, and here’s another great addition to their line of plugins. The PSP Impressor is a high-precision compressor that can be used on individual tracks, busses, and even mastering chains. We’re going to take a look at its features and what makes it such an exciting plugin.

The Graphic User Interface is divided into various parts, including the VU meters, About box, compression interface, global controls, internal board controls, and preset menu. Understanding each one will give you a more detailed view of how the Impressor works.

The VU meters sit near the top of the interface and give you a clearer view of how the plugin affects your track. You can change between Pre, Post, and Gain Reduction using the toggle in the center. This allows you to better understand the input and output levels, as well as the gain reduction from the compressor.

There is one meter for each channel (left and right). They both come with two needles: a red one for digital peak levels, and a gray one for the VU level. The reference VU level can be altered in the About box interface.

To access the About box, click on the PSP Impressor label under the preset selection. This gives you a graphic representation of how the compressor works, starting with the input on the left-hand side, moving through the individual components, and ending on the right-hand side with the output.

The Compare button gives you an extra visualization of the input and output levels, depending if you select Pre, GR, or Post on the meter toggle. And finally, there is the VU reference level, which can be edited from -24 to 0dBFS. The default setting is -14dBFS.

The most important features of the Impressor can be found in the central panel of the compression controls. There are three parts to this area of the GUI, so we’ll study each individually to make it clearer. 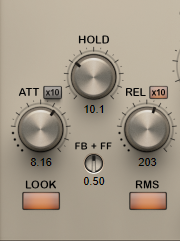 The Dynamic controls are located on the left of the interface. There are attack (ATT), release (REL), and Hold knobs, as well as a lookahead processor (LOOK), an RMS level detection button, and the FB+FF rotary selector (more on that soon).

The attack knob comes with four automatic attack times, with Auto 1 being the slowest and Auto 4 being the fastest. You can also choose to set the time manually between 0.1ms and 100ms. The release knob is designed the same way, with four automatic times and a range of 10ms to 1s. Both come with x10 toggles, allowing you to multiply the attack and release times by 10. This is a great feature for giving you more control.

The Hold knob is another fantastic feature if you want to compress your signal heavily. By varying the amount, you can sustain the gain reduction level for up to one second before it starts being released.

Next up is the Look button. It’s a simple lookahead processor that inserts a slight delay between the direct signal and the sidechain, allowing the plugin to apply more precise gain reduction.

And then there are the level detectors. RMS level detection is active if the switch is lit up, giving you a more analog-style emulation with softer responses. If the switch is off, the detector is set to Peak detection. This has a more modern vibe with more precise level control.

Finally, there’s another of PSPaudioware’s secret treasures. The FB+FF selector lets you choose between feedback, feedforward, and feedback-feedforward modes. These options get you closer to different compression styles. The feedback mode corresponds to classic compressor designs like tube, FET, and opto hardware. Feedforward is more commonly used on modern VCA compressors. The feedback-forward mode gives you the best of both designs, getting you closer to the vibe of a buss compressor.

In the center of the interface, you have two knobs for compression control, as well as a make-up knob (MK-UP) to the side. The bigger of the central pair is how you dial in the compression level. Rather than having a standard threshold option, you set this knob to a value between 0 and 100 for lighter or heavier compression. The higher the level, the lower the threshold and the heavier the compression.

The next knob controls the shape of the compression. It gives you set options for ratio and knee levels. You can start from No Compression, then go from Soft to Hard. The harder the shape, the higher the ratio and the stronger the knee.

These controls don’t give you as much power over the compression as most digital compressors, but they’re closer to analog hardware. PSPaudioware seems to have put in a lot of work to choose the best correlation between the threshold, ratio, and knee settings.

The make-up level can be edited manually so that you can control the output level after the compressor has reduced the gain. If you prefer automatic make-up, you can switch on the Auto button underneath the MK-UP knob. 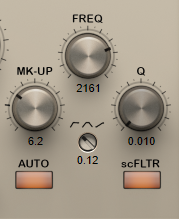 The final section in the central interface lets you manipulate the sidechain. Using the rotary selector, you can select between high pass filter, bell, and equal power. Each one gives you different options for changing the frequency and Q knobs. If you don’t want to engage the sidechain at all, you can turn it off using the button below the Q knob.

You have the possibility to choose between an internal or external sidechain. There is a slider at the bottom of the plugin, so you don’t have to choose between 100% of one or the other. Instead, you can blend them for the most creative results. This is a fantastic addition to the Impressor that you won’t find on many other plugins.

Beside the slider, you’ll find the Monitor switch. This lets you listen to the track that is being used to control the compressor. If this is engaged, the Impressor’s interface will be tinted orange, and a message will appear to let you know you are monitoring the sidechain input. It’s a simple trick, but one that can come in handy so that you don’t forget you’re monitoring the sidechain rather than the main track. 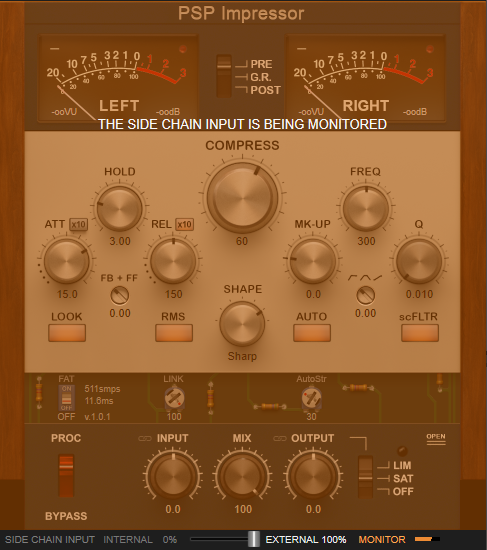 If you’ve tried PSP’s Saturator plugin or have read our review of it, you’ll be familiar with the global controls at the bottom of the GUI. There’s a toggle to bypass or activate the plugin on the left-hand side. In the center, there are Input, Mix, and Output controls. The input and output can be reverse-linked by clicking on either of the link buttons.

And then there’s the LIM/SAT/OFF toggle. When set to LIM, the plugin acts as a brick-wall limiter, ensuring the output level doesn’t surpass 0dBFS. It also gives the signal some gentle saturation which can be made more intense if you push the input and output gain to more extreme levels.

The SAT option also acts as a limiter. It keeps the output to a maximum level of 0dBFS while also accentuating the signal’s transients, adding some brightness.

The limiting functions aren’t directly related to the compressor, so you can set the Shape to No Compression or turn the Mix all the way down and just use the plugin as a limiter. Seeing as both the Impressor and the Saturator work so well as limiters, it’s almost worth investing in them just for this functionality.

On the global control interface, there is a small button that says Open. This leads you to another hidden secret of the Impressor. This option will reveal another part of the GUI where you can turn on the FAT (Frequency Authentication Technique) oversampling algorithm. This option reduces the aliasing effect, giving you even better saturation.

The FAT control works best on the most important tracks in your song, as it can make them stick out even more in the mix. Using it on all your tracks will make it less noticeable overall and, seeing as it increases CPU usage, can slow your computer.

Unlike the Saturator, the Impressor only has two more controls in the internal board. There’s a Link option for manipulating the sidechain channels’ stereo field. And the AutoStr knob lets you control the strength of the automatic make-up, giving you more precise power over the make-up level. 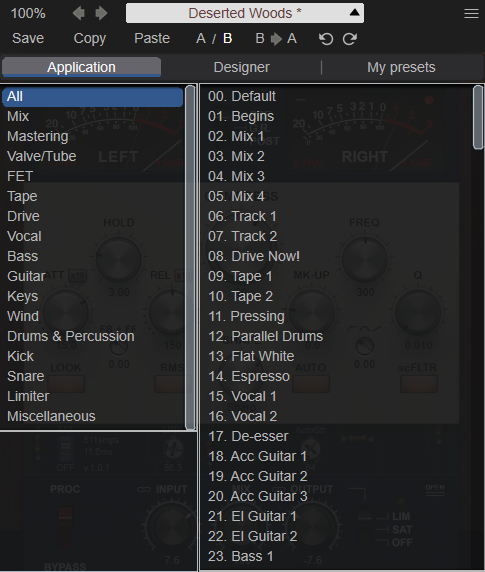 As always, there must be a shout-out to the amazing number of presets created by both PSP’s designers and professional mix engineers. They are divided into many categories so that you can find one that suits different instruments or compressor types. You can easily select one and A/B compare it with others. It’s also really simple to save your own.

After trying out the PSP Impressor, you can see that the designers have put in a lot of work to make a great compressor that emulates analog gear without copying any specific piece of hardware. This gives you so many extra options as you’re not restricted to any one design, be it a FET, opto, or VCA compressor.

It has a fantastic selection of presets for getting you started and a well-laid-out interface. The internal/external sidechain slider is a definite highlight, as well as the hold option. The built-in limiter also sticks out as it keeps the signal to a maximum level without adding too much heavy saturation.