Coming across reverb plugins that faithfully emulate hardware gear can be tough. Finding one that was created with the guidance of a true pioneer of digital audio technology is even rarer. But that’s what we’ll be reviewing today: the PSP 2445, inspired by the EMT 244 and 245 digital reverberation units. Dr. Barry Blesser, the designer of the original EMT algorithms, was a consultant during the creation of this plugin, so you know it’s going to be good.

The PSP 2445 is split into five sections containing its main features. We’re going to look into each one, starting with the Power section on the left and ending with the Output on the right.

The first section of this plugin contains a few very basic controls. There’s a red button at the top which turns the processor on and off. Below that, there’s another on-and-off switch, this time in the form of an I/O toggle. Both of these switches do the same thing, so there’s not much to say here. The only thing to keep in mind is that if the mix is set to 100% wet and you turn the power off, the signal will stop playing altogether.

Next up, however, is a key feature in how the PSP 2445 functions. A three-way rotary pot allows you to choose between emulations of the EMT 244, the EMT 245, and a mix of both.

The 244 function gives your track a bit more clarity in the midrange, and the high-end is looser. This allows the low-end to stick out a bit more. On the other hand, the 245 tightens up the high-end. It keeps the clarity of the mids, but the low-end becomes slightly muddier.

Let’s think of a breakbeat as an example. With the 244, you’ll get a clearer kick and a warm snare, but hi-hats that lack definition. With the 245, the kick will become less defined, the snare will still be warm, but a bit brighter, and the hi-hats will stick out clearly.

As always, PSP has introduced a great bonus option for even more control over the end result: the mix between 244 and 245. If you set the rotary pot to + and use the example from before, you’ll get a better mix between the highs and lows than if you stick to just the 244 or 245.

Another special feature will influence these outcomes, but we’re saving that for later.

The next section on the GUI gives you control over the input level. There’s a simple knob that ranges from -∞ to +12dB. Any value over 0dB will start adding some saturation, which is a fantastic way to make your reverb sound more exciting.

Above the input knob are four metering lights so that you can visualize how much gain you are bringing into the plugin. It’s more of an aesthetic homage to the EMT reverbs that the PSP 2445 is based on than a defining feature.

Beside the input, you have two knobs for controlling the delay and early reflections of the signal. The top one in green is a standard pre-delay ranging from 0 to 84ms. It’s an easy way to get some clarity from your signal before the reverb takes effect. However, it is set to increments of time, so it doesn’t give you as much control as some other reverberation plugins.

The yellow knob below the pre-delay lets you influence the early reflections. These are going to make a big difference to the overall reverb sound. When set to the minimum level, the signal will lose some clarity as the early reflections seem to gather more densely. As you set the level higher, the main signal feels more present, and the reverb glues around it beautifully. 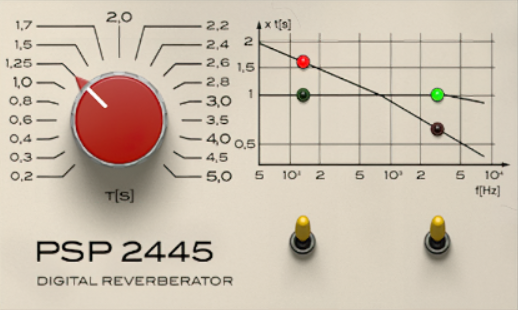 The time controls take up a large portion of the interface. The most noticeable knob on the whole plugin is the big, central red one which sets the decay time of the reverb. Like the pre-delay, it’s set to increments, starting from 0.2 seconds and working up to five seconds. It’s a simple control that allows you to manipulate the length of the reverb’s tail quickly.

Next to the time knob is a graphic that shows the relation between the reverb frequencies and how they last over time. There are two yellow toggles below this graphic and four LED representations within it. They work together to influence the lower and higher frequencies.

The toggle on the left lets you extend the reverb time of the lower frequencies. This is a great way to avoid the muddiness that can occur when the low-end of a signal is sent through a longer reverb.

The toggle on the right works similarly but dampens the high-end. Dampening the higher frequencies can give you great results if you’re looking for a warmer sound. On the other hand, if the signal lacks some airy space, you can leave the high-end untouched.

The last section on the main interface controls is the output level. There are two knobs that are easily recognizable: mix and output. They both perform exactly as they’re supposed to, giving you power over the dry and wet signal and the output gain.

Once again, PSP has added some controls that allow you to set the best-sounding reverb you can. They are accessible by clicking the Open button underneath the PSP 2445 logo. This time, we’ll start from the right-hand side, as the ones on the left will need some context.

Two very simple controls are on the right-hand side of the bottom interface. First, there is a balance knob so that you can choose how much the reverberated signal will be played on each channel. This doesn’t affect the dry signal. And then there’s the width knob, which allows you to control the overall stereo width. Setting it to the minimum level on the left will give you a mono signal, and the maximum level on the right gives you extra stereo width.

Next up are the three frequency control knobs. First, there’s a high-pass filter so that you can choose how much low-end feeds into the plugin. PSP’s plugins tend to have great HPFs, and this one is no exception. Then there are the Low and High knobs that will affect the times we looked at on the graphic in the time controls. The default positions are in the center, so anything left of there will be lower times, and anywhere right will be higher.

Just left of the center of the interface, next to the Close button which will hide these features, is the Mod knob. Most reverb plugins that are created using algorithms rather than convolution systems tend to have some modulation. Without getting too technical, this allows you to smooth out the reflections and resonances of the reverb.

The modulation on the PSP 2445 gives you a really nice chorus effect if you set it to higher levels. However, if you prefer a grainier sound, try dialing it down.

The three-way toggle on the left-hand side was added to boost the functionality of the 244+245 engine modes. The original hardware units would take a mono signal and transform it into a stereo signal. This is the first option on the toggle (Mono-Stereo).

The Stereo-Stereo option works best when you choose to run both the 244 and 245 engines in parallel, as the process of creating a true stereo-to-stereo operation can become shifted on the individual modes. However, that doesn’t mean that you can’t get some interesting results if you play around with these modes.

After deciding on the stereo routing, you can choose how each engine (244, 245, or both in parallel) and their channels will be routed. You can move the toggle between I-II (default) and II-I (swapped). These options allow you to choose between denser or more sparse reverb sounds.

Every time we review a PSP plugin, we have to go over the presets. Almost all of them so far have had a great selection. The PSP 2445 continues this tradition with many factory and designer presets. In terms of instruments, they mostly focus on drums and vocals. Then there are a few categories that look to emulate plate, hall, and room reverbs.

The possibility to easily create your own presets, as well as A/B test them all, are simple yet truly useful additions to this plugin.

The PSP 2445 is an astounding plugin for emulating digital reverberation hardware. It has simple controls that give you great results instantly. The stereo and channel routing options can be tough to understand, but they can be useful to manipulate the sound further. And that’s the most important part of this plugin: the sound. It’s a great-sounding plugin that can create a fantastic glue for your tracks without feeling out of place. Another win for PSPaudioware.