One of the most overlooked techniques in music production is mixing with a transient shaper. Transient shapers are incredibly helpful tools that allow you to shape a signal’s waveform. In just a few tweaks, you can take a signal from subpar to pro.

If you aren’t familiar with transient shapers, it is quite possible that you have one sitting in your arsenal of plugins, and you didn’t even know it. Most DAWs come with stock transient shaper plugins, which provide more than enough to get started.

Let’s dive in and take a look at some of the best ways to use transient design, as well as a few of our favorite transient shapers!

How Do You Use Transient Design?

There are hundreds of creative ways to use a transient shaper on instruments in a mix, though here are a few of our favorite ways to use one:

Mix engineers often use transient shapers to add attack to drums. Sometimes drums lack the initial punch that we want. Even after adding EQ and compression, obtaining that punch seems nearly impossible. That’s where a transient shaper comes in handy.

A transient shaper can be used to bring out a bit of snap in the snare drum or bring a little bit of beater out of the kick sound. Rather than cranking up your EQ, simply increase the attack on your transient designer to help them cut through the mix.

Do note that this will increase your overall volume, so make sure to volume match by bypassing and un-bypassing your transient designer plugin.

Transient designers can be used in the complete opposite way of what we mentioned above. Rather than adding snap or punch to a sound, you can decrease the attack of a sound’s transients to soften it up.

Let’s say that you record an acoustic guitar part where the microphone was placed too close to the neck, and most of what you are hearing is the sound of a plectrum. That plectrum sound may be far too sharp or spikey for your mix.

Traditionally, one might reach for a dynamic processor, such as a compressor, to tame those spikey transients. Some might even consider re-recording the sound altogether. Instead, slap on a transient designer and dial back the attack just slightly.

Note that this will decrease the overall volume, so make sure to volume match once again. Als0, be careful not to go overboard with attack reduction, as it could start to sound unnatural or ruin the groove of your mix. Keep it as subtle as possible and use compression or EQ to tame anything left over.

One secret way to remove excessive or ugly room sounds on recordings is with a transient designer.

Most bedroom producers are working at home in untreated environments. If you are using software instruments exclusively, this may not be an issue. However, if you are recording your own vocals or instruments, you might want to get rid of nasty room tones that show up on your recordings as a byproduct.

All you need to do here is to reduce the sustain of your transient designer to get rid of the unwanted room tone. This technique is very similar to gating, though the final product sounds far more natural.

Do note that if your transient designer has a release control, you should reduce it as much as possible. This way, you won’t have any instance of room tone appearing after your initial signal.

You can produce some pretty interesting effects by increasing the sustain control on your transient designer. The sound of increased transient designer sustain is often compared to that of a driven compressor. You can think of this as a creative effect to increase volume and add character rather than solving a particular problem.

Let’s say that you have a tom fill that is feeling quite small in the context of your mix. Rather than using compression or reverb to increase the size of the toms, try and increase the sustain on your transient designer instead.

Do note that you can potentially screw up your groove if you do not time your sustain properly. Carefully add in sustain while listening to your effected sound in the context of your track so that it breathes in time with the groove.

The majority of transient shapers have simple and limited controls, though as plugin companies evolve and innovate, we are beginning to see more and more transient designers with extended controls for producers to dig in deep.

Here are a few controls you might expect to find on a transient shaper: 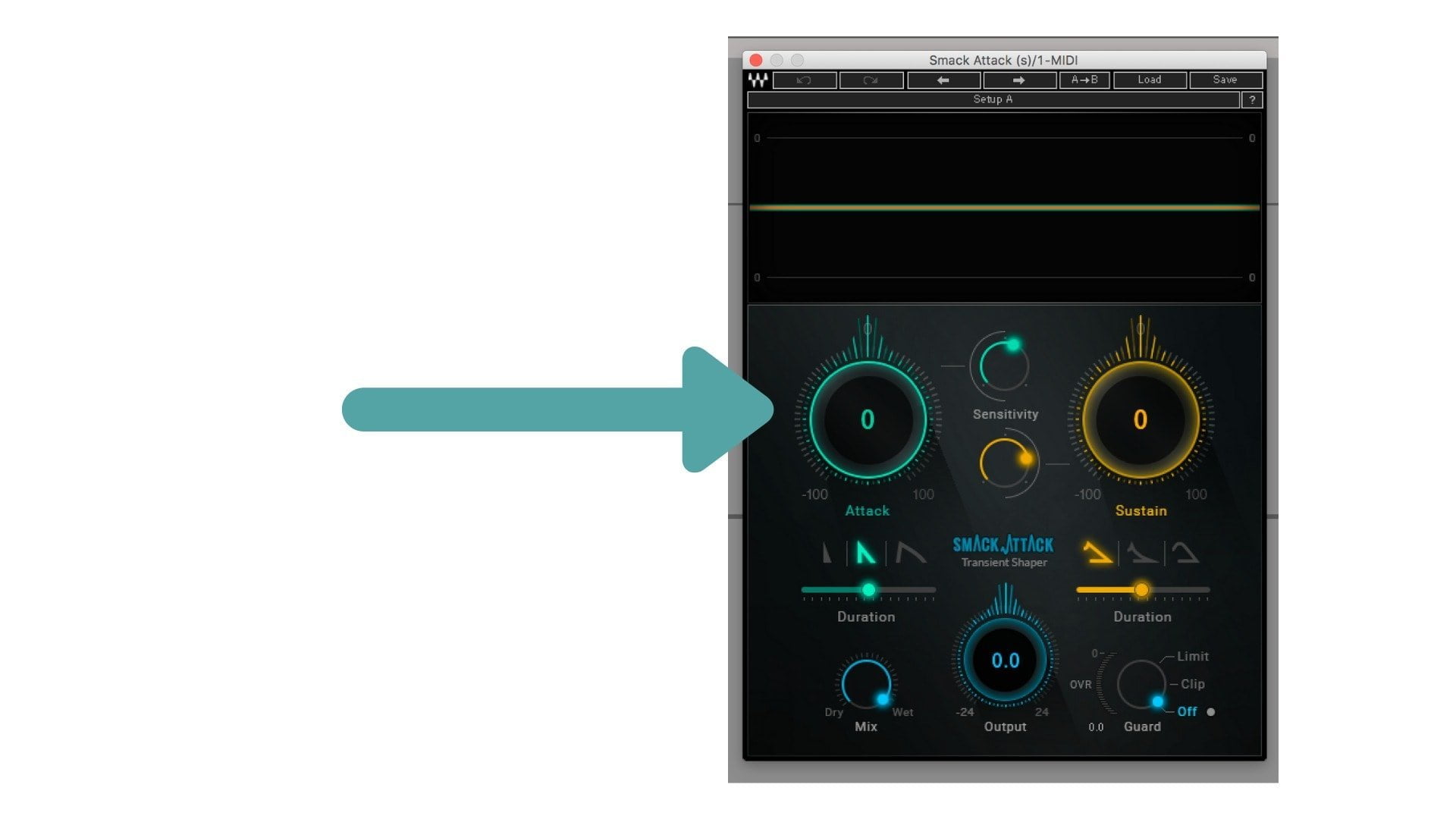 The attack is the main control on a transient shaper. It can be used to increase or decrease the transient level on a particular track. When enhancing the attack control, you can give the impression that your drummer is playing much harder, for example.

On the other hand, you could soften the attack to give the impression that your drummer is playing in a gentle manner. The attack control is best used for instruments that have fast transients, such as drums, percussion, or plucked instruments. 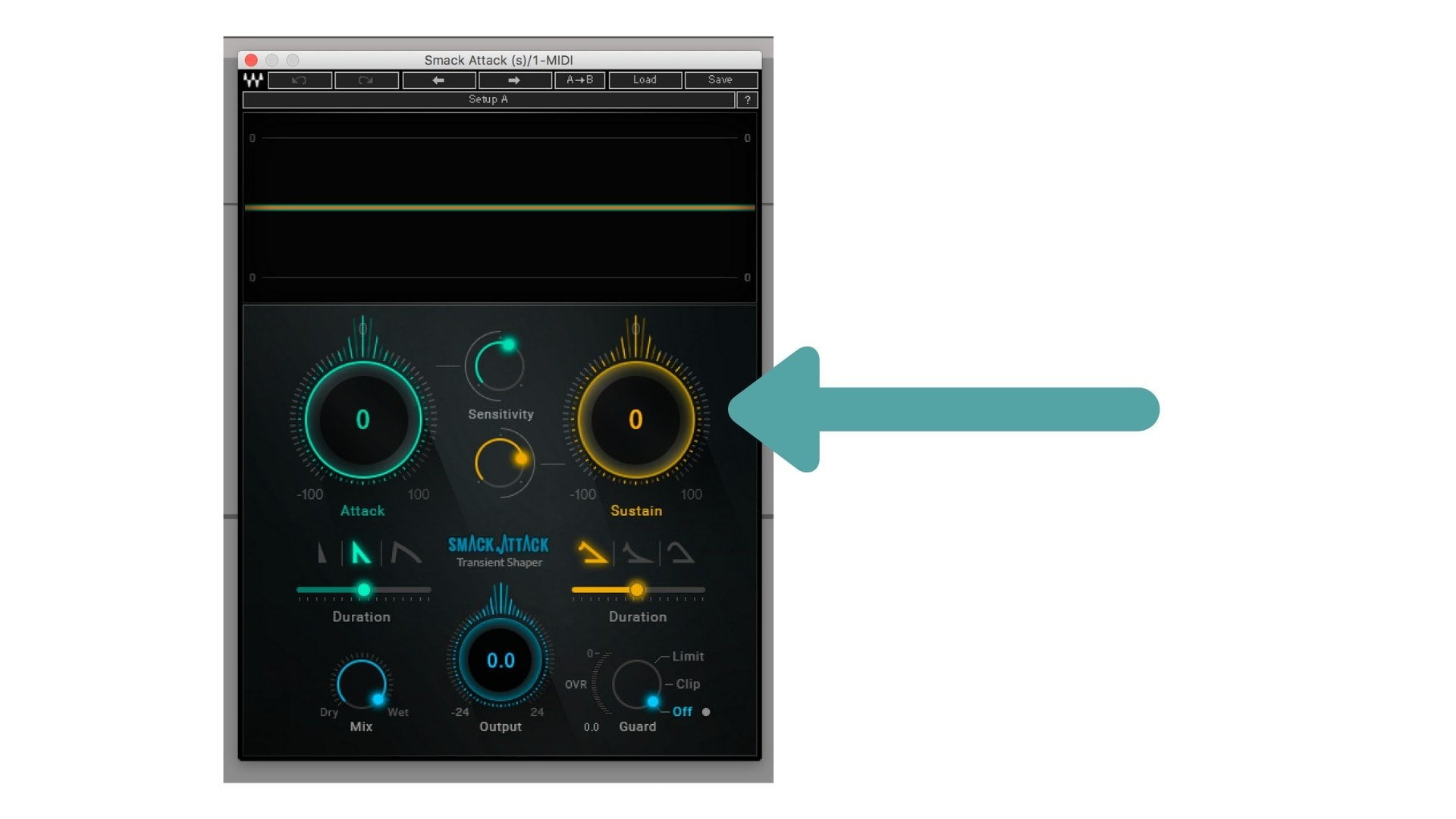 The sustain control is often used to reduce unwanted tails on signals. You can reduce the sustain to get rid of ringing drum hits or unwanted bleed from the recording room. You can also increase sustain to bring out the depth and body of a sound, similar to a dynamic expander. 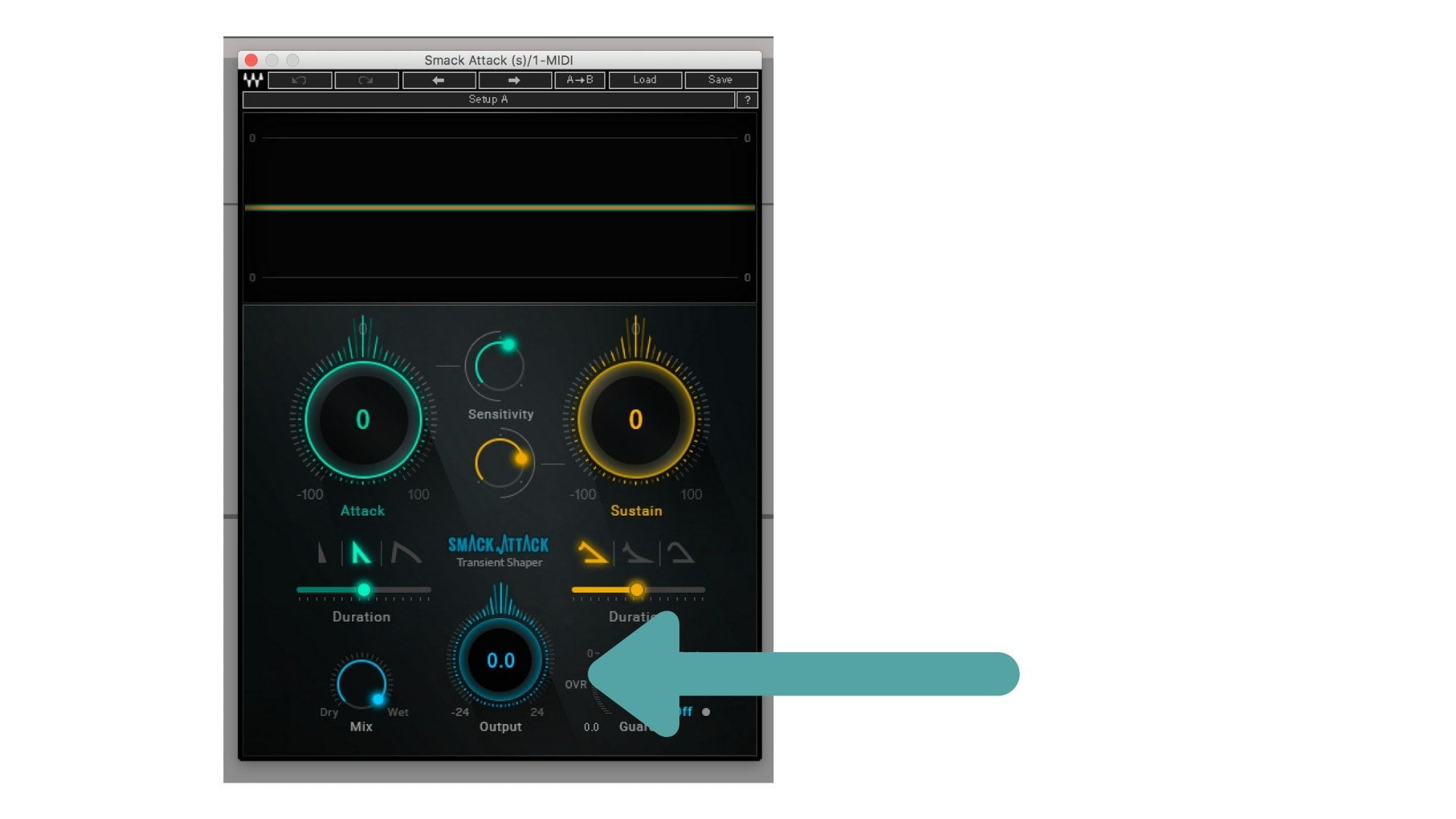 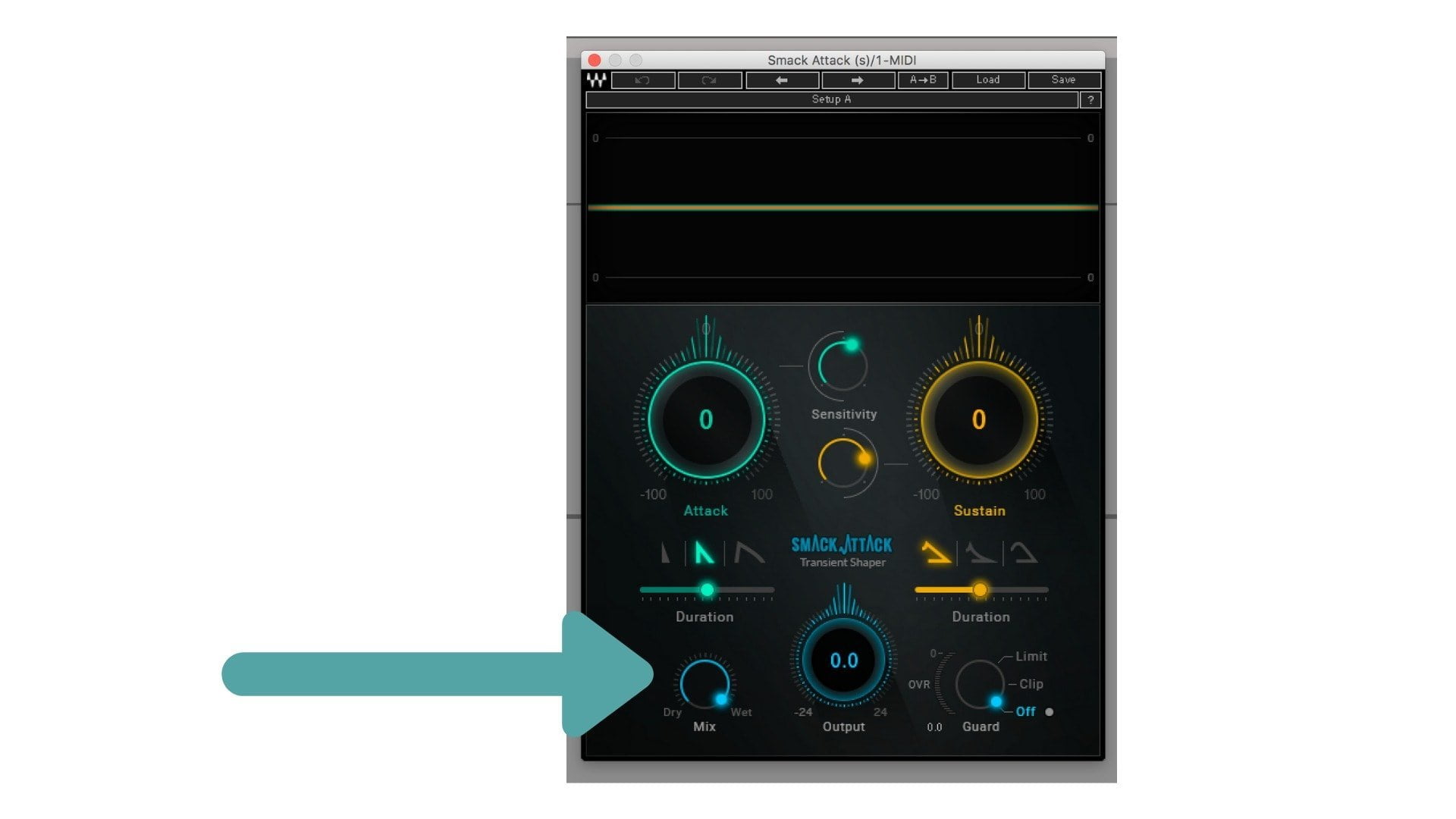 The Mix control is used to blend your processed audio with your dry signal. Mixing in heavy-handed transient shaping is one of the best methods to get the best of both worlds. You can retain a natural sound while adding subtle attack or sustain underneath.

How And When To Use Multiband Transient Shaper?

One of our favorite applications for multiband transient shapers is drums.

Let’s say that you have a snare that is sounding a bit weak.

Increase the sustain on that band, and you’ll find that your snare sounds bigger and deeper without an unnatural, airy top end.

Another excellent way to use multiband transient shapers is on reverb.

Let’s say that you have some high-end percussion running through a reverb send, though the reverb is starting to feel a bit too bright and spitty on the top end. A typical first instinct would be to EQ the reverb, though what if we still want those high-end frequencies?

One solution to the problem could be decreasing the sustain of the high-mids or high frequencies while leaving the low-mids intact. This way, the low-mid range of the reverb (what we typically want anyway) is still emphasized to retain a sense of space.

Is Mixing with Transient Shaper Necessary?

Transient shapers are essential tools in the world of modern mixing. Some of the world’s finest mix engineers use transient shaper tools as secret weapons for top-notch mixes.

Whether you need to enhance the attack of a signal, tame the presence of a signal in a mix, or fix any glaring recording problems, these dynamic effects processors can get the job done.

When Should I Avoid Using a Transient Shaper?

One major pitfall to avoid when using a transient shaper is to use it in place of a compressor.

However, you should only ever use a transient shaper when you are looking to manipulate the character during the attack and release phase of a dynamic signal’s transient.

In other words, you should avoid using transient shapers to tame the dynamics of a signal throughout a track.

Schaack Audio Transient Shaper is one of the most beloved transient shaper plugins on the market today with its intuitive interface and incredibly low price.

The old-school VU meters are easy on the eyes, and the handy analog drive feature feels like it fits right in.

Transify has a built-in per-band clip circuit, which helps add a bit of aggression to your sounds without allowing for peak overages. You can easily adjust the frequency band ranges using the individual cut-off controls, providing you even more control than you would think at first glance.

Oeksound Spiff comes with a real-time spectrum analyzer so that you can see the effects of the moves you make as you make them. This full-featured plugin comes with a solid selection of presets and mid-side processing.

Thanks to the FFT-based algorithms, you will find additional sharpness and sensitivity within Oeksound Spiff that you c0ould not find in traditional transient shapers.

Transient shapers are one of the most powerful yet often overlooked tools in the world of mixing. Of course, as with most mixing tools, they require care and caution when in use.

Begin experimenting with transient shapers using the techniques we listed above and use your ears to make sure you are getting the results you intended!