Has your Bass started making fuzzy and unpleasant sounds? Today we’ll talk about how to get rid of Fret Buzz on your Bass and what causes it.

A well-tuned guitar is beautiful, its music enveloping the listener with each note ringing in harmony. However, guitars are delicate instruments with many moving parts. Sometimes when playing, you may notice an off-kilter sound, such as a string or strings rattling against the frets (a phenomenon known as “fret buzz”).

The root cause of this vexing issue may be identified and corrected with relative ease. Examining your method is the first step. You might need to press firmly enough on the strings, or your finger might be resting too far behind the target fret, causing a buzzing sound up and down the neck.

Of course, there could be anything wrong with your instrument itself rather than your playing. That’s unfortunate, but it’s something you can fix yourself or with the help of an experienced guitar tech. In what follows, we will explain what causes fuzzy sounds and how to get rid of them.

How To Get Rid Of Fret Buzz On Your Bass?

We must acknowledge that the strings of such an instrument are under considerable tension. To get rid of buzz, we need to study the fundamentals of a guitar, such as what makes a guitar tuned, how to make the griff straighten up, and why the bass has saddles.

We must acknowledge that the strings of such an instrument are under considerable tension. If your bass is buzzing, try lifting the action or adjusting the truss rod. If neither of these solutions helps, it may be time to dress your frets since they may have worn unevenly over time.

Buzzing or rattling is an issue that plagues many bassists, but buzzing problems are usually simple to solve. However, there are times when it’s best to consult an expert.

When playing bass, an improperly adjusted truss rod is one of the most common causes of buzzing or rattling strings. The truss rod is a flexible metal rod located inside the bass’s neck, allowing the instrument to be played in different tunings. To prevent the neck from bending inward toward the body due to constant tension from the strings, truss rods are used in basses.

Notes that buzz is caused when the strings occasionally make contact with the frets due to this neck’s slight curve. Buzzing at the neck’s lower and upper end usually indicates that the truss rod isn’t straight. On the other hand, if you hear buzzing in the center of the fretboard, your neck is probably twisted in the wrong direction.

In either case, a minor truss rod adjustment should do the trick. However, it can cause significant damage to your bass by over-adjusting the truss rod, so if you need more confidence in your abilities, you should get professional assistance. 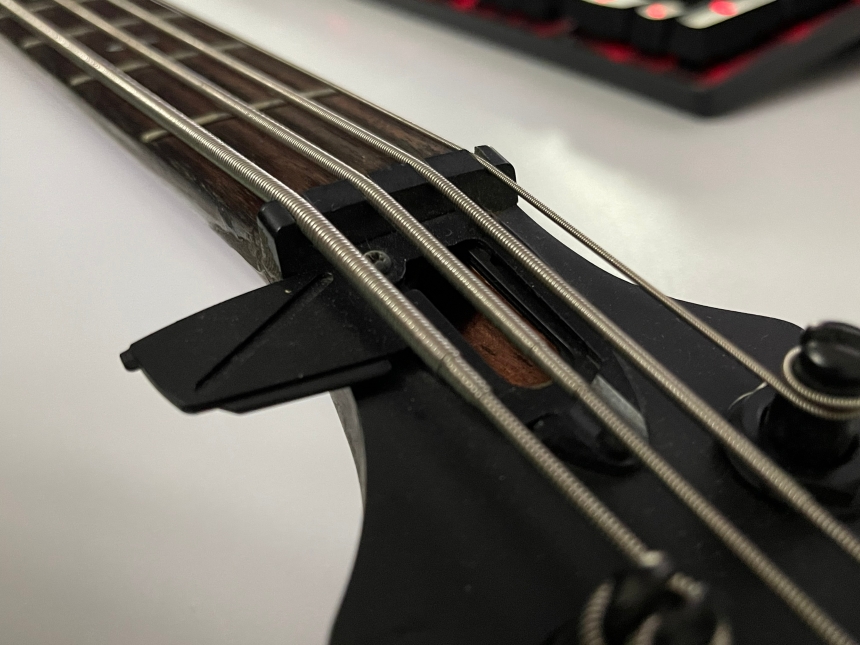 There’s a significant probability that this isn’t the issue if your instrument has never been set up. As a result, one of the most common reasons for getting a new instrument set up is that the action needs to be lowered. There is a significant likelihood that this is the case if you have recently had a setup done or if you have recently set the action yourself and are now experiencing buzzing as you play.

However, whether or not your strings are buzzing, players suggest lowering the action as much as possible. By raising it to the point where the strings no longer buzz, you will probably be pleased with the improvement in your bass’s tone and tone. You’ll quickly reach the higher notes on the neck and find your way around the instrument.

Things that occur with older instruments will now be discussed in greater detail. Like anything else, ancient instruments eventually break down with time and use. The nut on your bass is a potential weak point. Connecting the fretboard to the tuners, the nut is a little (often white) piece of plastic or other substance. Thanks to the nut, your strings won’t touch your fretboard as much.

As time passes, the nut of your instrument will inevitably become worn and brittle. As a result, their usefulness declines over time. Over time, the strings can generate rattling and buzzing noises if they burrow too profoundly into the nut and begin to strike or glaze the frets again. Fortunately, a new nut costs little, although many of you will likely prefer to have a pro do it.

Changing the nut on the bass is more involved than other common repairs or modifications, and it may call for specialized equipment that some players don’t have. Replacing a bass’s nut is straightforward, but removing the old one can be a real pain. A flathead screwdriver will do the trick for removing the old nut from your bass.

The nut may need to be loosened and tapped out with the end of the screwdriver, so give it your best go. It will help if you use extreme caution because a misplaced or excessive blow to the neck can result in a severe injury. 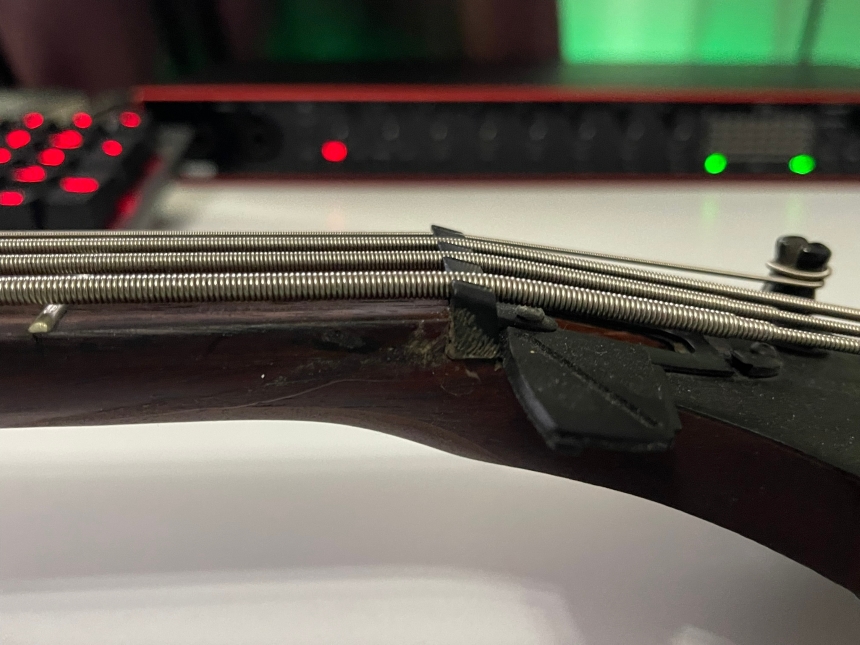 This is a terrible predicament and will set you back some cash if it happens to you. Once again, this is something that primarily affects older instruments due to general wear and tears. Over many years, the strings wear down and break from being squeezed, rubbed, and slammed against the frets. When this happens, the frets wear out unevenly, and the instrument begins to buzz and shake.

To ensure this is the case before proceeding, it is recommended to consult an expert. If this is the case, having your bass refretted will cost you at least $200. A “Fret dress,” in which the frets are shaved down to the proper height rather than replaced entirely, is a little more cost-effective solution. Make sure the frets are the issue before spending the $140 on a repair that wasn’t necessary.

You may have noticed that the frets in the most frequently used parts of the neck are buzzing. The frets are becoming worn down because of this.

Contrary to popular belief, there may be nothing wrong with your instrument. Instead, the issue may lie inside your bass playing. Let’s investigate the possible causes of your bass’s buzzing or rattling sound.

What causes Fret Buzz On Your Bass?

You’ve found a guitar that you dig in terms of aesthetics, feel, and sound, but you’ve noticed that some or all strings were buzzing against the frets. So let’s investigate some typical fret buzz reasons and how to deal with them.

The frets should parallel one another (they should all be the same height). However, this is not always the case (higher fret “fall-away”), so we won’t get into it here. When frets aren’t perfectly parallel, it indicates that some frets are shorter than others and some are taller. A fret buzz occurs when a string makes contact with a fret that is too high. No annoying buzzing from the string touching the lower frets.

There is a gap between the top of Fret #2 and the bottom of the guitar string since the frets are all the same distance from the fretboard. It’s important to leave some room between the fret and the string when plucking a guitar so that the string can vibrate without hitting the fret. Keeping in mind that the string doesn’t truly buzz when played at the lowest frets, this should be crystal evident.

Compared to fret #1, fret #2 extends the distance between itself and the ground. Because the string has so much room to vibrate at the first fret, it can be fretted and played violently without buzzing. Because Fret #2 is so low, Fret #3 will undoubtedly be relatively taller, meaning that the issue of fret buzz still exists; it’s just been moved up the neck.

3 REASONS WHY YOUR FRETS ARE BUZZING - Bass Guitar Maintenance

The first, the twelfth, and the seventeenth fret are typical locations to measure string action. One player’s ideal string motion may be another’s nightmare. While some players enjoy a lot of action, others prefer it to be very low (or “slammed”).

You must reach a certain point before the string operation becomes problematic. Taking the “activity” of a string is tricky with regular rulers; therefore, we suggest using this gauge instead. With many of these gauges on hand, we can easily adjust the action of each string in our inventory.

Many electric guitars’ action measurements are taken at the seventeenth fret. We play best with a 0.050″ (GBE) string action on the treble strings and a 0.080″ (GBE) action on the bass strings (EAD). A fret buzz will likely occur if the action is lower than this. Because of this, a guitar’s frets must be perfectly even with one another. 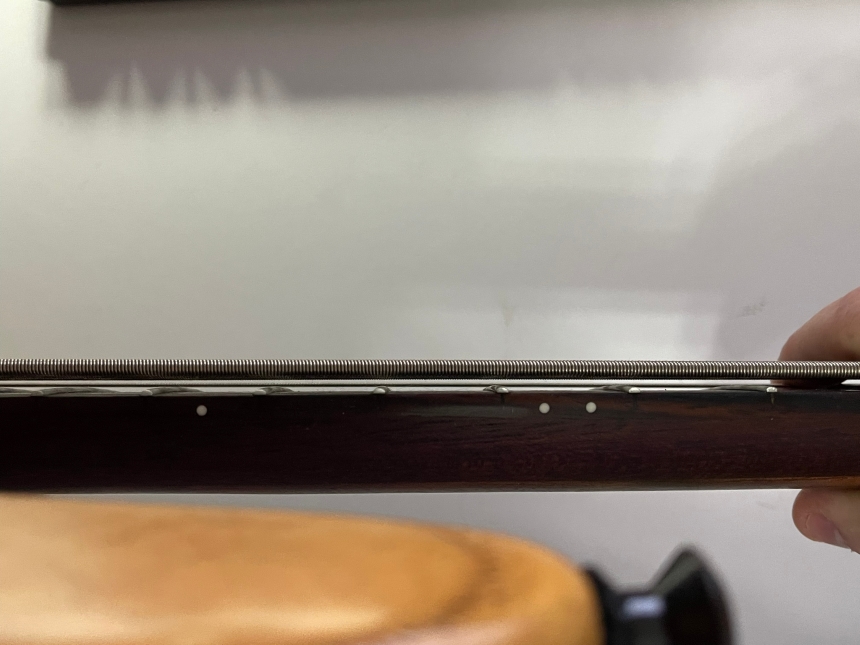 The neck of a guitar should be nearly straight, but not quite. A properly strung and tuned guitar should have a tiny indentation in the middle (around the 8th fret). That slant is quantifiable and referred to as “neck relief.” A “forward bow” describes a neck that curves inward toward its center. The term “back bow” describes a neck that does not have a natural dip but instead has a hump.

Because there is not enough relief in the neck, the open strings of a guitar with a back bow will commonly buzz at the first fret. Most of our guitars have a truss rod that you can adjust with the 4mm hex wrench that comes with the guitar. Some guitar necks can be twisted just clockwise, while others can’t be twisted at all (nylon-string, classical guitars).

The option to raise or decrease the amount of pressure applied to the neck is convenient since it allows us to tailor the support to each individual’s specific needs. By pressing down on the first and last fret of the fourth string and then examining very closely to see if there is a gap between the bottom of the fourth string and the top of the eighth fret wire, we can get a good idea of the amount of relief in the neck.

The method is accurate but helpful only if something else is available. The neck is bent in the back of the string and touches the fret wire without a corresponding gap. The neck is curved forward if the distance between them is considerable (half a millimeter or more).

Once the guitar is strung and in tune, you may eliminate the open string fret buzz by adjusting the truss rod until the smallest gap is visible. The distance between the strings should be no more than the diameter of a standard high-E string. 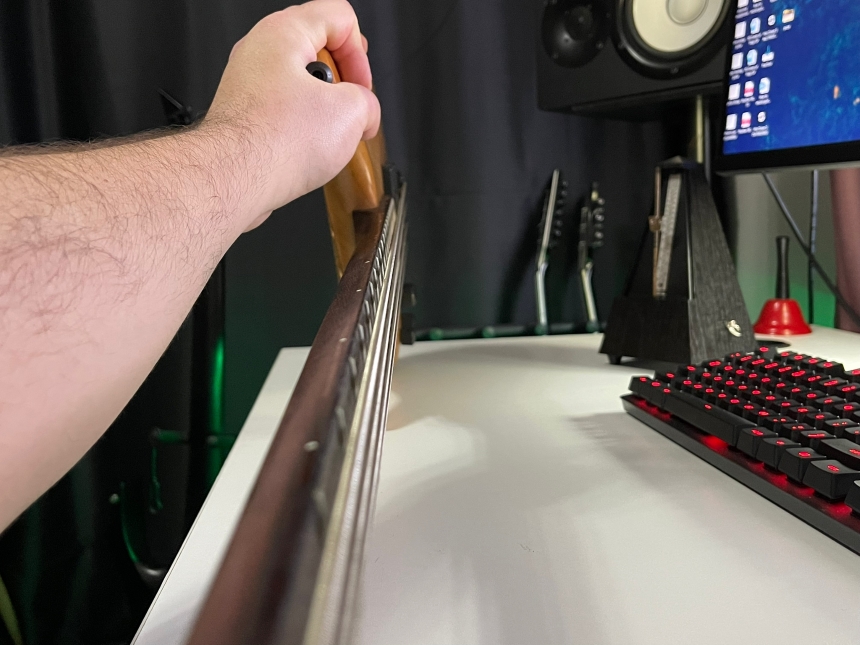 There will always be issues with the neck of a stringed instrument. Even if you buy a high-quality bass, you’ll eventually discover one of the above issues, as the Bass is constantly under tension. At that point, your only options are to learn how to modify it yourself or to contact a luthier.

Sadly, many musicians need to take the time to set up their instruments properly, and then they come to the luthier claiming that they need to repair parts like the nut or the truss rod.

To avoid the financial burden of replacing a broken instrument, it is best to practice the techniques above on a cheap instrument. After some practice with the Bass, you’ll appreciate the significance of intonation in achieving a technically proficient and musically satisfying performance.