164 years have passed since the technological breakthrough of vinyl records, yet it remains a mystery to many. Join us as we dive into how vinyl records make sound and work.

Modern polygraph records are made out of polyvinyl chloride, also known as vinyl, a type of plastic — hence the name. These records have tiny grooves engraved into them, and the whole process starts with these grooves.

As we know, a sound is vibrations or waveforms that travel via mediums to our ears — the most common medium being the air. So, the concept is that if we could somehow mimic the waveforms onto a physical thing, we should be able to play it back.

Hence, the grooves on a vinyl record we were talking about have the waveforms engraved. If you look at them up close with a microscope, you will see a V-shaped valley being made in each of the grooves. Each interior face of the V-shape has each stereo channel (left/right) data.

Similarly, the depth of the groove controls the volume and the number of grooves encountered per second determines the frequency. To understand further, have a look at this spectral analysis: 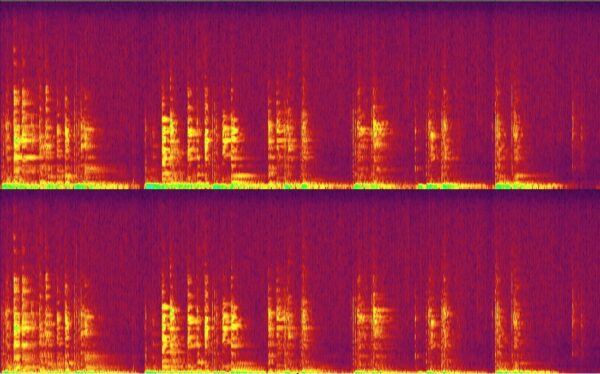 This image shows the two stereo channels, each with higher frequencies in the upper section and lower frequencies in the lower area. The brighter color signifies a louder sound. A vinyl record’s grove has similar information collectively on each face of the groove’s valley.

Furthermore, since we measure sound in frequencies (numbers per second), the real-time speed at which a record is made has to be the speed at which you play it. So, if you play a record made in 33.5 RPM (rotation per minute) on a 78 RPM player, everything will sound higher pitched because the grooves are moving too fast.

This phenomenon is what makes the “tape-stop” effect on both tapes and vinyl records. When a player stops, the rotation per minute slows down, and all the grooves play slower than intended, making the renowned run-down effect.

Modern vinyl records are manufactured in several steps. A finished song is played into a machine called Record Cutting Lathe, which moves a needle that engraves the waveforms into a thin, aluminum-made lacquer disk.

This disk is then used to build a nickel-made master disk, where the waveforms are raised instead of engraved. This process is what coined the word “mastering” in music.

The nickel disk is then used to make what’s called a mother disk. Finally, the mother disk produces two to four stamper disks. They are pressed onto heated (softened) vinyl disks that then get the grooves engraved into them.

Components of a Vinyl Record Player

How is a vinyl record played? Every record player has two main parts: the cartridge and the motor. The cartridge houses the needle, arm, and transducer required to make sounds.

Similarly, the motor spins the record at a constant speed so that the needle can pick up the tiny vibrations the grooves make. As we’ve established, this speed has to be the same as the record’s manufacturing RPM speed.

Since the motor is relatively simple to understand, we will instead focus on the cartridge:

The needle is also known as the stylus. It rests against the grooves of the record. When the record spins, the needle vibrates. Often, these needles are made of diamond, which scores ten on the Mohs scale (the hardest naturally occurring mineral on earth).

The hardness helps manufacturers make the needle extremely tiny and capable of entering even the smallest grooves. The shape, type, and size of the needle change its price from a meagerly $5 to an astounding $15,000.

Other than diamonds, you can also find ceramic needles, but only in the most inexpensive phonographs. The hardness of the diamond also makes it highly durable against the constant wear on the vinyl.

At the other end of the arm from the needle, we have a transducer. A transducer is any device that transforms one form of energy (physical vibration) into another (sound). In the past, manufacturers used to use a piezoelectric crystal to generate sound.

However, it has mostly become obsolete. So, instead, you will find an electromagnet inside the transducer, which functions similar to the diaphragm in a microphone. Instead of the vibrations our mouth and instruments push into the microphone, it picks up the vibrations the needle generates, carried by the arm.

What Are The Pros and Cons of Vinyl?

The ultimate advantage of a vinyl record is in owning a physical copy of your favorite music. The large artwork, the smell, and the ritual of flipping a record from one side to the other make vinyl records enchanting. Also, people argue that the sound of vinyl is more pleasant than that of digital recordings.

We would credit it to the warmth of analog equipment and nostalgia, so yes, they do arguably sound better. On the other hand, vinyl records require maintenance and a great deal of care and attention. They are also easily damaged and expensive (compared to the digital format).

Digital recordings are remarkably clean, whereas vinyl records are much livelier. They have a distinctive sound, filled with surface crackles, pops, and distortions that people love.

How Many Songs Does a Vinyl Have?

Here are the three most commonly used vinyl records:

The rate of rotation gives the length of time per side. Faster rotation gives a longer record time, but the grooves would have to be much smaller to fit the frequency count. Doing so would significantly reduce audio quality.

What Are The Types of Vinyl?

Vinyl comes in a range of different flavors based on competition and consumer tastes. A better way to group vinyl and tell them apart by the speed (in rotation per minute, or RPM) at which they spin while playing on a turntable. There were many speeds on the market from the late 19th century until the 1920s, when the recording industry agreed on the 78 RPM standard.

Most 78s were made of minerals and cotton fibers held together with a resin called shellac. Shellac records are far less durable than the younger vinyl generation, so many surviving 78s tend to be rare.  Further, age greatly diminishes their playback quality.

After World War II, the 33s hit the scene. These recordings are playing at the speed of 33 rpm, and they are the most used today as they have the best quality.

And finally, around 1950, the 45s were created, often called singles because each side commonly held just one song. They are still used and produced today but not as much as the 33s.

How Can I listen to Vinyl?

There is only one way to listen to vinyl records: turntables. Turntables can cost anything from $50 to well over $2,000. However, cheaper turntables are likely to damage your vinyl over time.

What Do I Need to Get Started with Vinyl?

First, you’re going to need a turntable. You don’t have to spend a lot initially, but it’s worth getting a good quality one to avoid damaging your vinyl. Next, you’ll also need some quality preamps. Note that some turntables come with internal preamps.

Finally, you’re going to need speakers. The simplest and most cost-effective way forward is to purchase some active speakers.

Can I Convert Vinyl Records Into Digital?

How to Safely Store Vinyl?

It is better to have minimal exposure to all kinds of light and no exposure to direct or intense sunlight. For home collections, room temperature or below is preferable. Also, don’t stack things on your records. It’s preferable to store them side by side.

Your vinyl records can last anywhere from a year or two and up to well over 100 years if stored well. If you’re interested in the audio content than the format itself, consider digitizing your collection.

Many music lovers are pulling back from the world of streaming and online music videos, opting to have a different kind of listening experience and to support their favorite artists. In 2020, vinyl records outsold CDs for the first time in decades.

We hope this article has helped shed some light on how the vinyl record functions and answered the most common questions regarding their use, fame, and storage.

In a world where streaming has been plummeting the music industry’s revenue over the past decade, the modern acclaim for vinyl records feels like daybreak for artists. It lets fans get a little closer to their favorite musicians while also supporting them financially.