The guitar is an ancient yet ever-evolving instrument whose history spans back thousands of years. Although there is still much debate around the history of the guitar we know today, it is clear that humans have been using string instruments since ancient times.

The history of the guitar took shape in Medieval Spain, though it wouldn’t be until the 20th century that the guitar would take a modern form. That 20th-century guitar evolution would be the stepping stone for the development of rock and roll and almost every other musical genre we know and love now.

What is the history of the guitar?

Scholars have collected images of stringed instruments over 3,000 years old, telling us that the history of the guitar dates well back into the Babylonian and Mesopotamian Empires. 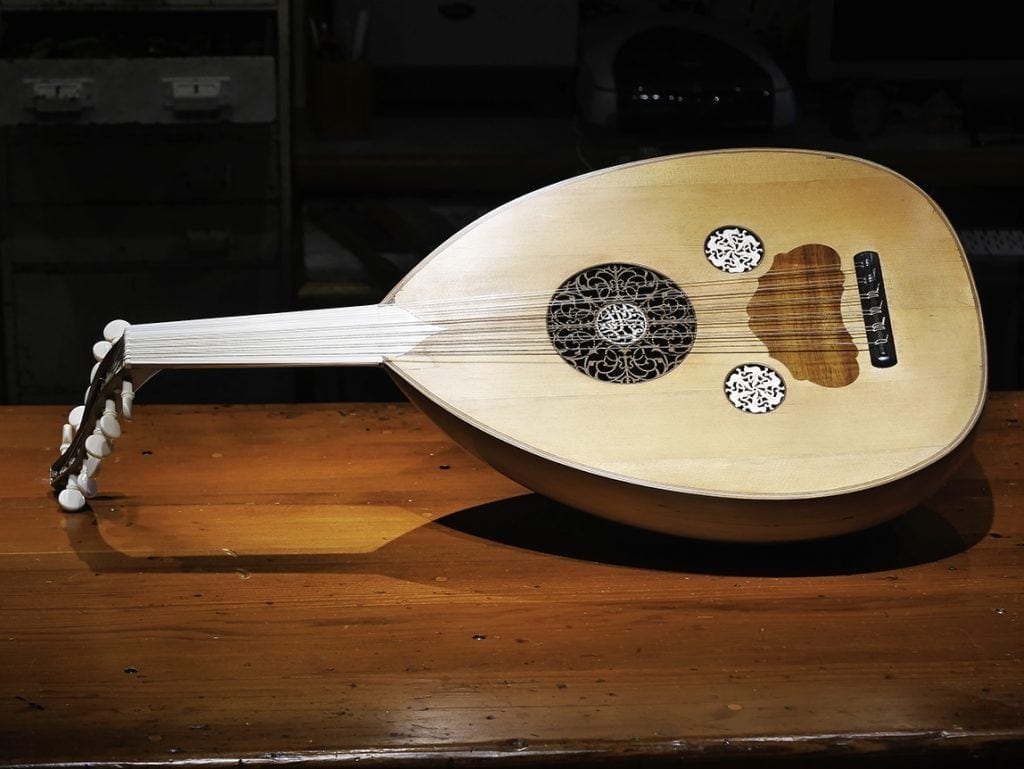 The oud came to Southern Spain around 711AD when the Moors invaded. The body of the oud utilized a round shape, though, unlike the guitar, it did not have frets, and the neck was much thinner. However, the Arabic playing style gelled nicely with this Moorish instrument, leaving a lasting impact on the history of the guitar. 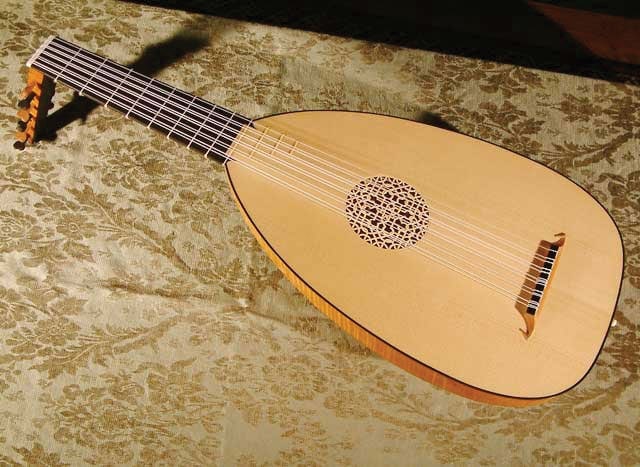 The lute was very similar to the oud with a rounded body, though it came in various shapes and sizes. Lutes were often strummed with quill feathers and had four or five courses. From the Egyptians to the Greeks to the Romans, the lute was one of the most popular instruments in western civilization.

The lute had considerably evolved by the end of the Renaissance era. Many lutes had anywhere from 20 to 30 strings, though they had also fallen out of style.

Their demise was thanks to the Spanish, who have developed a fretted instrument with a curved body that was quite familiar. It was during the 15th century that the first real glimpse of the guitar began to appear.

By 1600, the Baroque guitar replaced the traditional lute. Musicians loved it due to its ability to stay in tune and the lesser number of strings. The Baroque guitar was one of the modern guitar’s first early ancestors to use movable frets as well.

The people of Spain took the design of the Baroque guitar and reworked it with an hourglass curve and a small hole in the center of the body. The instrument was dubbed the ‘vihuela‘ and would become one of the final ancestors of the modern guitar.

It wasn’t until the later 18th-century that six strings became the standard on Spanish guitars. Historians began noticing a striking resemblance to the modern guitar during these times.

Who invented the first guitar?

Antonio de Torres Jurado, otherwise known as the grandfather of the modern guitar, would be the first to craft an instrument similar to that of the contemporary acoustic.

This Spanish guitarist and luthier remains one of the most influential guitar makers in history and has had a lasting impact on the history of music.

What was the first guitar?

One of the very first guitars that resembled the modern guitar was a classical guitar created during the mid-1800s by Antonio de Torres Jurado.

As the story goes, Antonio took up the guitar, learning the craft from a man in Granada named Jose Pernas. Antonio then returned to Seville, where he opened up a guitar shop and began creating his guitars. It was at this shop that Antonio would meet several famous composers and musicians, one of whom was a renowned composer and guitarist by the name of Julian Arcas.

What year was the guitar invented?

While we do not know when Antonio Torres Jurado crafted his very first guitar, we do know that he began crafting guitars around 1842, which leads us to believe that the very first guitars date back to that decade.

The very first guitar began taking modern shape with an increased curve in the waist, a broad body, a thinned belly, and a machined head. The machined heads replaced older wooden tuning pegs, keeping the guitars in tune for longer while enhancing the overall aesthetic.

Antonio used a notable bracing and body design that was quite innovative for the time. The design is what gave the guitar a thick, massive sound and distinct voicing.

It wasn’t until a bit later in the 19th-century that Andres Segovia, another famous Spanish guitarist, decided to make a couple of his own changes. He took the classical guitar that had been crafted by Torres and made it a concert instrument. 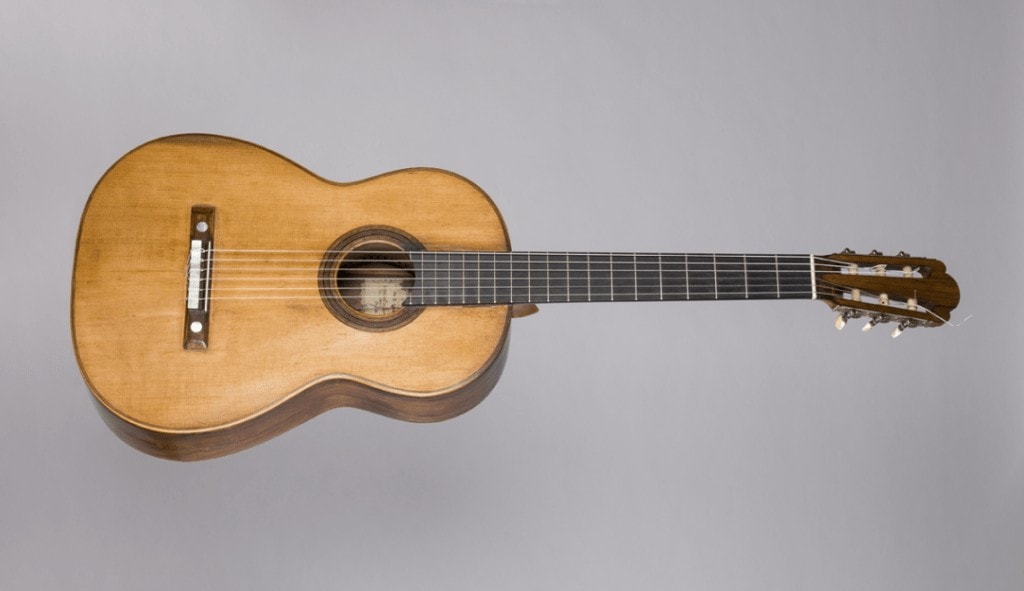 Why do guitars have Six strings?

The current guitar model that we know today comes with six strings, as it provides an adequate pitch range and enough notes to allow guitarists to play commonly used chords with comfort.

The sixth string found its way onto the guitar in the 1700s as a way to expand the overall range of the instrument. The very first guitars likely had four strings, though as more and more people began to pick up the guitar, luthiers began adding five and six strings so that players could access a wider range of notes.

Check this post to know which guitar you should learn:

If I Learn Acoustic Guitar Can I Play Electric?

How To Buy Your First Guitar? (Electric, Acoustic & Bass)

Do Fender Guitars Appreciate In Value? (Are They Worth It?)

What are the four types of guitars?

While there are many different guitar designs found throughout the world, there are four types of guitars that all guitarists should know. Those include:

For starters, classical guitars utilize nylon strings or strings made with other similar materials, such as carbon or gut. These strings produce a sound that many describe as warm and rich.

Classical guitars have hollow bodies and resonate with external amplification. You’ll typically find a small, decorate design around the soundhole, which is known as a “rosette.” These don’t serve functional purposes and are simply there to provide a nice aesthetic.

Acoustic guitars are very similar to traditional classical guitars in that they have hollow bodies, which amplify the strings so that you don’t need external amplification. Similar to a classical guitar, they are made with wood and have six strings. However, standard acoustic guitars use steel strings rather than nylon strings, which are much brighter sounding. We often hear steel strings in rock, folk, blues, country, and other modern genres.

Acoustic guitars come in a wide variety of body shapes. Some acoustic guitars have symmetrical body designs while some have cut-away designs, which allows easier access to the higher frets.

Jumbo acoustic guitars or Dreadnoughts come with larger bodies, which provide a boomer sound. On the other hand, the Auditorium and Parlor guitars are much smaller, providing a quieter, tighter, and more articulate sound.

Acoustic guitars range from half-size to 3/4-size to full-size.

Electric guitars have solid bodies, unlike classical or acoustic guitars. Because of the absence of sound holes, electric guitars make very little sound on their own and must be plugged into an external amplifier to play properly.

Electric guitars come in a wide range of shapes and sizes. However, some of the most important or iconic electric guitar designs are the Fender Stratocaster, Fender Telecaster, and Gibson Les Paul.

Electric guitars are typically made out of wood and have six strings for the most part.

Some of the most legendary semi-acoustic guitar models include the Gibson ES-335 and the Fender Telecaster Thinline. These guitars provide a bit of added versatility for those who want to play or practice without amps.

Who owns the most expensive guitar in the world? 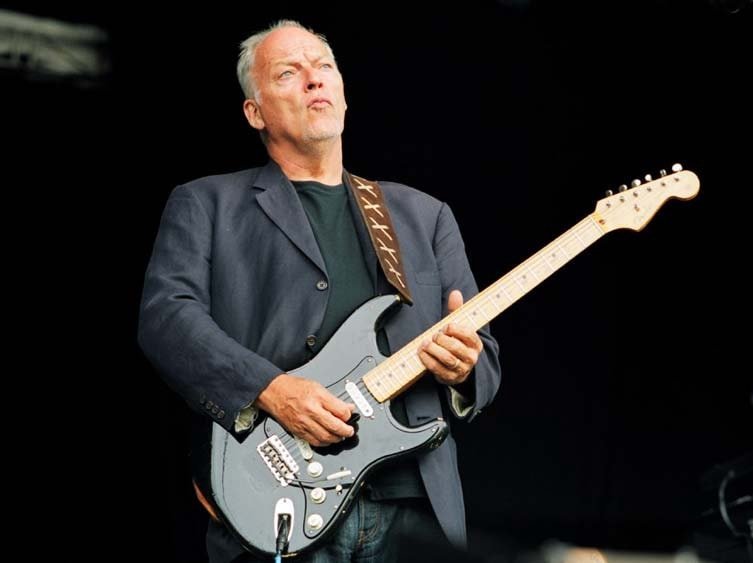 The Indiana Colts Owner purchased David Gilmour’s iconic black Stratocaster back in June of 2019 at a David Gilmour auction in New York.

This Stratocaster, otherwise known as the “Black Strat,” was present on many famous Pink Floyd Works, including Wish You Were Here, The Wall, Animals, and Dark Side of the Moon.

Where did the word guitar come from?

The word ‘guitar’ likely dates back to the word ‘kithara,’ which was an ancient Greek word that represented a stringed instrument closely related to the lyre. Many historians believe that the word kithara came from an even older Persian word ‘sehtār.’

As time went on, the word developed into the Spanish word ‘Guitarra,’ which would eventually be translated into English as ‘guitar’ in the late 1600s.

Who invented the first acoustic guitar?

Christian Frederick Martin is given credit for inventing the very first modern acoustic guitar. This German-born American guitarist and luthier crafted his very first guitar in the United States during the early 1830s.

He was born in Markneukirchen to a family of established cabinet makers. As a young boy, he became the apprentice to a famed guitar maker in Vienna, Austria, by the name of Johann Georg Stauffer.

Martin made his move to the United States after a work dispute, where he would set up a small shop in the Lower West Side of New York City. The shop became the forerunner for the famous C.F. Martin & Company.

He crafted a unique guitar with an X-braced body, which could handle the additional stress that was created by modern steel strings. Steel strings generated far too much tension for the fan-braced guitars that Torres invented at the time.

Due to the growing popularity of steel strings, guitarists began using picks. The use of picks was a fundamental change and created new types of music that could be played on acoustic guitars.

Is an eight-string guitar hard to play?

Eight-string guitars are not necessarily hard to play (unless you have very small hands) though they may require some adjustments if you are already used to playing six-string guitars. The “difficulty” in playing eight-string guitars is because they are harder for smaller people to handle with ease.

Eight-string guitars allow for a much wider range of playing and can be tuned to non-standard tunings, which is why we often see them in jazz, classical, and metal genres. While this additional range can be fun to play with, it does require a bit more flexibility with the hands. Necks and fretboards on eight-string guitars are much wider to accommodate the additional strings, so if you have smaller hands, you may find that it is hard to reach certain notes.

A great example of eight-string guitar playing comes from Ihsahn, a Norwegian composer and guitarist best known for his work with the black metal band Emperor. Check out his playing in the video below: