We’ll compare it in a real workflow scenario, focusing on their features and differences, giving our verdict on which of the two is the best limiter plugin. We’ll also learn about the history of limiting and some of its common uses.

What is a limiter?

A limiter is a tool used in the audio industry since the late 1930s, originally to avoid distortion during a radio broadcast and later prevent loud peaks from making the needle jump during record pressing.

The most common uses are at the end of the mastering chain, to shape a track’s loudness, or for creative reasons during mixing. A limiter can be added to a drum bus or percussion to reduce dynamics and bring these instruments forward.

You can also use a limiter to add parallel compression to a guitar track, for instance. Since the limiter will push up the quieter parts of the audio and prevent the louder parts from getting even louder, you’ll end up with a consistent, dynamic-controlled sound you can blend back in with the unprocessed signal to achieve the perfect balance between compression and the instrument’s original character.

Limiting can be used during the mixing process to control the fastest transients of a vocal track that a compressor’s attack can’t handle. Since a limiter is just a compressor with a very high ratio, you can handle these harder tasks.

To compare both plugins, we’ll apply them to the same two tasks:

By doing this, hopefully, you will understand the differences in each plugin clearly, how intuitive and efficient they are, and finally decide which is the better.

Both plugins have their own set of curves that add different processing to the audio. But since both plugins advertise transparency on their websites, I decided to check how transparent they truly are so that all tests will be done with the Transparent curve engaged.

For better clarity, the images will show the waveforms before and after the limiter is added to visualize better what the plugin is doing to the sound.

Also worth mentioning, whenever possible, I’ll use the same settings on both plugins, so we have a better view of their primary differences.

Here are some specs of each plugin as advertised on their websites, with a few pros and cons:

1:1 Limiting – allows the user to raise the gain without raising the output volume.

Oversampling – lets you process audio up to 32 times the sample rate of the project.

Loudness Metering – lets you choose the best loudness for your project.

Resizable Window – See it in full screen, large, medium, or even compact size.

Controllable Waveform Speed – adjust how you see the waveform.

Auto and Manual Release – choose the best release for your track or let the plugin do its magic.

Different View Modes – the plugin’s flexible UI lets you resize the window down to a horizontal compact view.

Max Target Function – set a target loudness and never get past it.

Different Color Graphics – different colors in the graphics area represent input and output signals. You can choose which one you want to see, or if you want to see both.

Ability to Move Within the Timeline – the slider at the top lets you drag and zoom through the processed audio to look for peaks and imperfections.

The first test is during mixing

I decided to apply parallel compression to the bass track since I didn’t want to lose some of the player’s movement and natural dynamics. Our goal here is to make the bottom of the track tighter and keep the longer notes from dying out too soon. Doing this will allow us to turn up the gain in both plugins to see how hard they can go.

For this first task, BUTE Limiter did a pretty good job of tightening up the bass and keeping it consistent. It also preserved the instrument’s harmonic characteristics.

The unprocessed bass (top) and the BUTE (bottom).

The first thing I did was turning up the gain, and I was surprised to hear no distortion at all. I decided not to use the Post Gain feature to break the brick wall property of the limiter. The release was set to Auto because this is one of this plugin’s greatest features.

I didn’t turn the threshold down too much because since the other plugin doesn’t have a proper threshold, it wouldn’t be a fair fight.

Overall, I found the result to come out very smooth and clean.

Similarly, the Pro L2 did great at tightening up the bass, though it really took some of the bottom out of the sound. What we were left with was a very tight, low-midrange-and-up bass guitar. 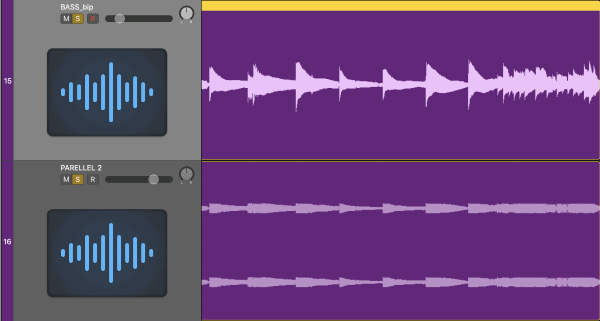 The unprocessed bass (top) and the Pro L2 (bottom).

I tried to match the previous test specs, but I instantly felt the lack of a threshold knob I could turn. Also, when raising the gain, the sound was instantly distorted. I had to work around that with the Lookahead and Attack knobs to achieve a more pleasing sound.

The bass being processed here is a Höfner Club Bass, which is a very fat-sounding instrument. I was disappointed with the L2’s harmonic shaping. If I were to use this in a non-parallel way, the plugin would probably have affected the song’s low end.

On this test, the BUTE Limiter had an obvious advantage. It contained the transients better and preserved the instrument’s lower frequencies, adding just the coloration I had set out to achieve.

Hadn’t it been for its Lookahead and Attack functions, the Pro L2 would have distorted the sound so badly I would have had to decrease the input and level match later to compare it to the BUTE. The lack of a threshold also made the L2 a little louder and its transients less contained, which I didn’t want for this test.

Final waveform comparison, with the BUTE (top) and the Pro L2 (bottom).

The second test is during mastering.

What is usually done in mastering is using the limiter as a final loudness shaping tool. For the sake of this comparison, I found out that going for a louder sound would be a nice way of comparing both plugins. I mastered the song but left a lot of headroom for the limiter to work. The goal here is achieving a loud but dynamic master. This is what we’re starting with:

Master without the limiter

For this test, the BUTE, again, did a pretty solid job overall. I found that lowering the threshold started causing distortion, so I kept it unchanged. I set a fast release, so it only had to limit the peaks and 9db of gain to give the song more punch.

During playback, I noticed the highs, especially when the hi-hat and cymbals hit, sounded a little crisp and harsh, but the mids and lows sounded fat and punchy. The overall result was loud and dynamic enough. I was pleased with it.

Master with the BUTE Limiter 2

For the Pro L2, I kept the same settings, adding about 350ms of attack. I also used the Pro L2’s built-in loudness meter to keep track of LUFS.

When listening to this version, I immediately felt like the highs’ harshness from the BUTE test was gone, and the song sounded more like the original EQ from the master. It was loud and dynamic as well, so it hit the mark.

Master with the Pro L2

The results were actually very similar in this case. Both plugins at the same settings delivered the same volume, as seen from the waveform comparison below. Although the waveforms look identical, by paying close attention, you’ll see some differences in the peaks caused by the fixed attack of the BUTE. The sound was also quite different, with the Pro L2 sounding slightly wider and the BUTE slightly punchier.

I felt from this test that the BUTE tends to add more of its own character to the signal, like a tube compressor, while the Pro L2 does what it advertises: transparency.

Personally, what really made a difference was the built-in Loudness Section in the Pro L2, which allowed me to keep track of the song’s dynamic range and strike the balance I wanted for the test.

With both limiters in transparent mode, which is the only curve they share, the BUTE is slightly more aggressive, although just a little, while the PRO L2 preserves more of the song’s dynamics.

Final mastering comparison, with the BUTE (top) and the Pro L2 (bottom).

It all goes down to taste and situation. Even though both plugins achieved different results in both tests, I believe there is an application for either of them. Signum Audio’s BUTE Limiter is a great tool for mixing. The Post Gain knob and the automatic release are two amazing features that can be explored creatively at any time. FabFilter’s Pro L2 is an amazing limiter with a built-in loudness meter that comes as a handy tool in these days of mastering for streaming services.

When it comes to features and transparency, though, the best of the two is FabFilter’s Pro L2.