As for a short answer to the question of “How and When To Use Algorithmic and Convolution Reverb In Mixing”, convolution reverb is excellent for those who are looking to accurately simulate a natural reverberating environment while algorithmic reverbs are great for more digital purposes.

Of course, there are several other variables that come into play, each of which is important to note when finding the right reverb for your track.

How & When To Use Algorithmic Reverb In Mixing

There are a number of reasons why you might want to use algorithmic reverb in a mix, including:

The majority of digital reverbs that you will find out there are algorithmic. They utilize far less processing power compared to their convolution cousins, thanks to the fact they use mathematical algorithms to simulate reverb decays. This makes them an excellent choice for computers without tons of processing power or sessions with many instances of reverb.

Some of our favorite algorithmic reverbs include Lexicon PCM Reverb, Valhalla Vintage Verb, and FabFilter Pro-R. 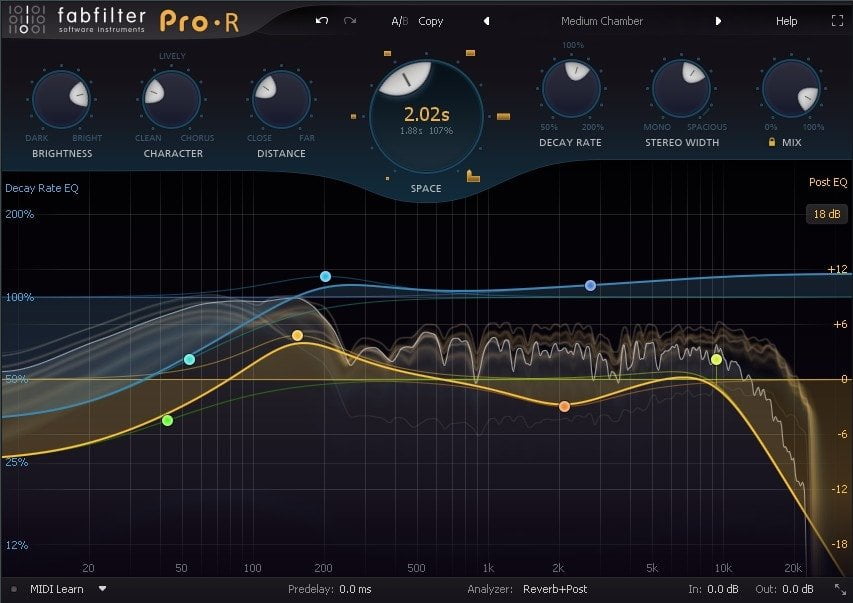 Now even though algorithmic reverbs utilize less processing power, many of them are more than capable of producing incredibly realistic reverb sounds. If we look at the Lexicon PCM, for example, the plug-in provides a wide range of reverb that vary from shorter rooms and ambience patches to longer halls, chambers, and plates, making them useful in just about any musical situation.

Thanks to the fact that algorithmic reverbs are more CPU-friendly, we recommend choosing these if you want to add insert reverbs as effects on your various tracks.

Fun Fact – One of the very first commercially available algorithmic digital reverbs was the EMT 250 Electronic Reverberator, which came out back in 1976 and is still renowned as one of the best digital reverbs to have ever existed.

For more information, feel free to check our article How To Mix With Reverb and How Much Reverb Is Too Much.

How & When To Use Convolution Reverb in Mixing

Convolution reverbs, once fairly rare, are becoming more popular in the digital world, as they:

Convolution reverbs use Impulse Responses (IR) to create reverbs. Impulse responses measure or represent the change of a signal as it moves through a particular system. In this case, that system is a natural, acoustic environment.

Convolution reverbs can be used to enhance an entire mix or bring out specific instruments within a mix. Similar to algorithmic reverbs, you can adjust a wide variety of parameters on convolution reverbs, including the decay time, wet and dry mix, and more.

Though they can be used for just about anything, convolution reverbs are often applied as natural space creators. You can throw a real room IR on a drum bus to bring it to life or a studio space IR to give an acoustic guitar a bit of space. You can even put a convolution reverb on the final output of your mix to bring all of your instruments in the same space for a more “live feel”.

The beauty of convolution reverbs is that they sound incredibly natural. Here are some of the well-known Convolution Reverb plugins: Audio Ease Altiverb, LiquidSonics Reverberate 2, and Waves IR-1.

Fun Fact – One of the very first real-time convolution processors was introduced back in 1999 by Sony and branded as the DRE-S777.

The main advantages of algorithmic reverbs are that they are easy to use and they do not require any samples, which makes them much easier on your processing power. Plus they can be used in almost any situation due to the fact that they are so versatile.

Almost every DAW out there comes with an algorithmic reverb plugin. You will use these more than convolution reverbs due to the fact that you can place them on multiple tracks without worrying about your session crashing.

The main disadvantages of algorithmic reverbs are that they can sound cheap or fake and they can be difficult for beginners to master.

Because algorithmic reverbs are based on mathematical parameters, meaning they don’t have the quality of randomness that you get with natural space, they will inevitably sound less realistic. Plus, they utilize tons of different parameters, such as early reflections, late reflections, decay time, feedback, shape, size, pre-delay, and more.

With that said, there are times when having an unrealistic reverb makes sense. Think about pop music. Producers and engineers are constantly pushing the boundaries of sound and space to create new and unusual sounds that excite listeners. Adding some magic with an unrealistic reverb can create a bit of extra interest for the listener.

How It Works: Algorithmic Reverbs With Yoad Nevo

The main disadvantages of convolution reverbs are that they are CPU-Heavy and quite expensive.

Convolution reverbs are quite complex from a computational standpoint. They don’t fair well when used multiple times in one session. Plus, for a top-of-the-line convolution reverb plug-n, such as Altiverb, you’ll end up spending a pretty penny.

When mixing, we often like to combine convolution and algorithmic reverbs, as they each serve a unique purpose. Think of it like this:

Let’s say we have a simple mix with four instruments, including drums, bass, guitar, and vocals. If we want to take a more natural approach to the mix, we will start by adding a convolution reverb to sonically “place” instruments within a realistic room. This gives off the impression that all of the instruments have been recorded in the same space together.

You can think of the impulse response as the “fingerprint” for the mix. You can choose all of your algorithmic reverbs based on your convolution reverb choice. Let’s say that you want a stadium-style rock song. You may choose to use a large hall or stage convolution reverb and bring all of your instruments into it. On the other hand, you may want to create a more intimate mix. In that case, you could try a smaller room or studio convolution reverb.

Once you have your convolution reverb set up, you can use your algorithmic reverb to create a bit more interest. Maybe throw your snare into a plate reverb to give it a sense of space and depth that is different from the rest of the drum kit. Maybe send your vocals into a separate vocal reverb to help them stand out from the rest of the instruments.

Can I use reverb on mastering?

Using reverb on the mastering chain is a technique that is debated heavily to this day. In our opinion, you can definitely use reverb on your mastering chain, though you must do it with caution.

The only instance where we believe adding reverb on the mastering chain would be suitable is if you were trying to give the impression of a recording living in a single space. If you have an intimate jazz recording, for example, you might want to add a convolution “nightclub” reverb on the mastering bus, turn the mix knob way down, and create the impression that your instrumentalists are playing in one room.

Mastering reverb is sometimes used in classical recordings as well. For example, you might want to add a slight bit of convolution “concert hall” reverb to a classical to add a bit more breath to your overall recording.

If your reverb provides you with the option to do so, we recommend putting a hi-pass and low-pass on your mastering reverb if you decide to use it.

Of course, it all comes down to experimentation. There is no right or wrong answer when it comes to using reverb in any facet. Try it out. If it doesn’t work, move on. Let your ears guide you!